Editor's Note: This story is part of a long-term reporting project from CPR News that explores how climate change is affecting Colorado, what's being done to address those changes and more.

Climbing in the formidable Black Canyon of the Gunnison National Park has never been for the faint of heart.

The canyon, about 250 miles southwest of Denver, drops some 2,700 feet at its deepest, from sage brush-studded ranch land to the raging Gunnison River. Climbers must rappel rock walls or scramble down gullies to get to the start of their climb. Stands of poison ivy are abundant.

The canyon holds a somewhat mystical place in the state's climbing lore. Writing in 1932, an early climber described the psychological stress he underwent when descending into the canyon.

"On such a descent, one leaves a bright, sunny world behind and climbs down into a rocky, forbidding hole eighteen hundred feet below the warm, inviting soil above which is filled with the terrifying boom of the river and the gloomy, grotesque aspects of water-worn rock," wrote Melvyn Griffiths, a member of the climbing group the San Juan Mountaineers. "One comes away with an overwhelming realization of the titanic forces of nature." 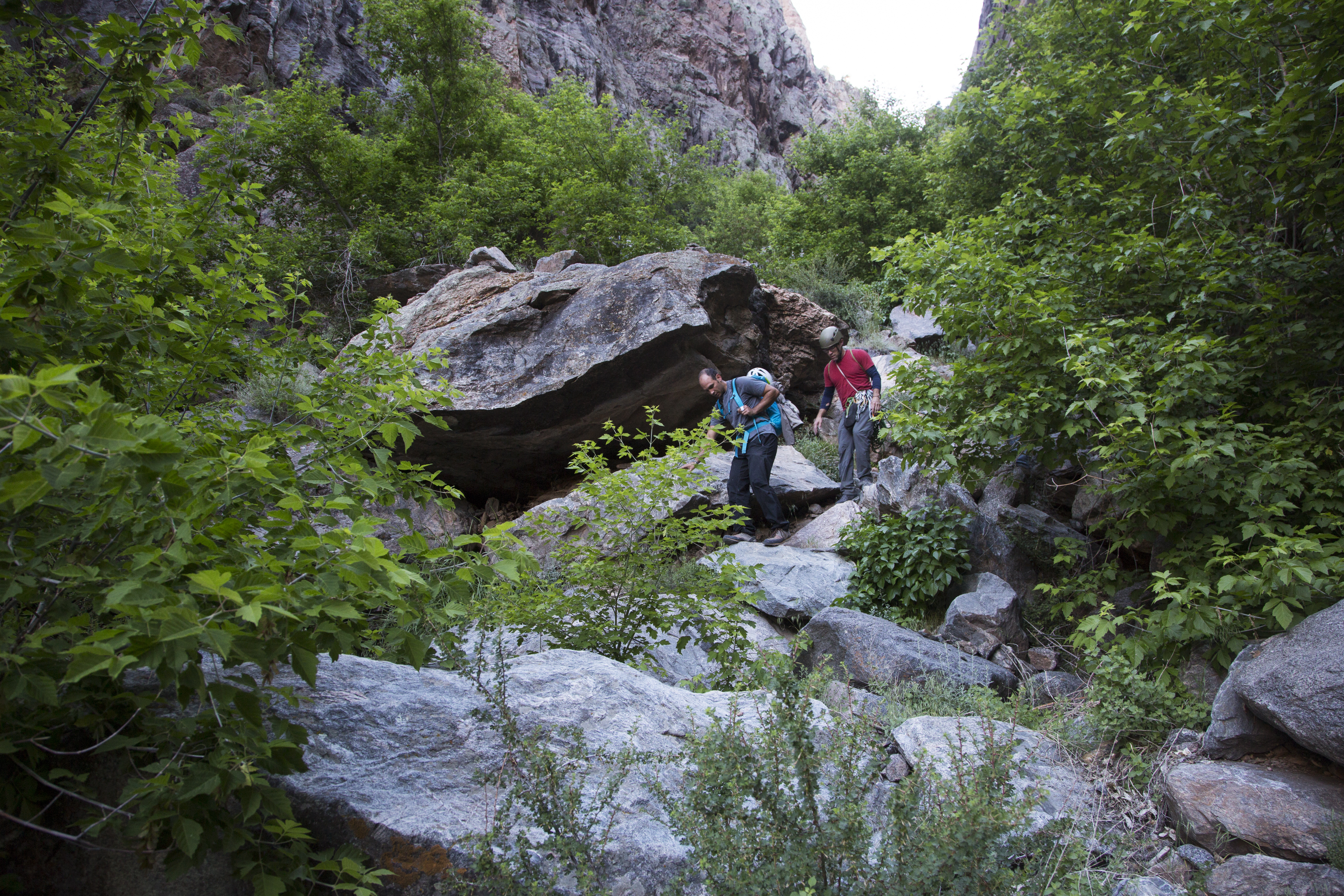 And while the Black Canyon isn't at the extreme altitude of Longs Peak, one of the state's most popular climbing destinations, it offers a different challenge: heat.

Summers have always been warm at the Black Canyon. But the park's average annual temperature has gone up nearly 3 degrees Fahrenheit since 1896. 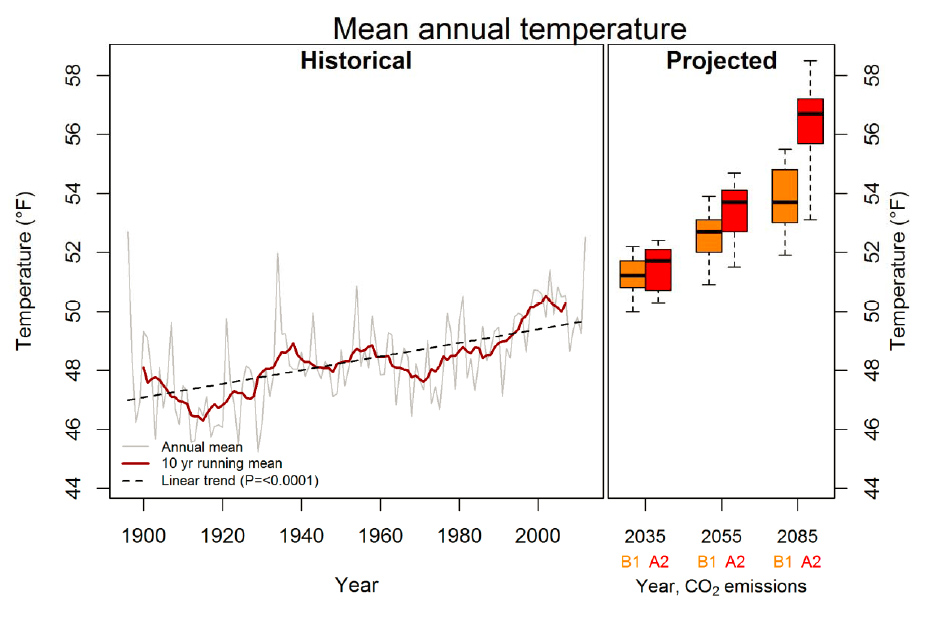 That's led to the climbing season, which has always seen a dip from mid-June to early September, to be pushed even earlier and later in the season. And in a park known for its long climbs, shorter days can complicate an already dangerous sport.

Across Colorado's national parks, climate change is affecting both the environment and how visitors use them. In the Black Canyon, scientists say the landscape is holding up well. On the recreational side, staff are gearing up for more hot days and the challenges that come with them.

Denverites Matt Peres and Matt Lautzenheiser got their inaugural climb in at the Black Canyon just in time. On a Saturday in early June where temps reached the mid 80s, the two friends scaled Comic Relief-- a 950-foot climb that's among the canyon's most popular.

"In a couple of weeks, it could be unbearable," Peres said.

Unlike many routes in the canyon, the approach to Comic Relief doesn't require any rappelling -- just an hour-long scramble down the aptly named S.O.B. Draw. And more importantly, it's in the shade until early afternoon.

Still, Peres and Lautzenheiser were covered in sweat as they emerged from the canyon in mid-afternoon. They were prepared though, carrying twice as much was as they typically pack for their more routine climbs in Eldorado Canyon near Boulder.

Years ago, Peres said, some friends weren't as cautious.

"They must've just miscalculated how hot it was going to be and just totally epic'd on the wall," Peres said, using lingo referring to being in over your head.

"They had no water," he continued. "[They] were just covered in salt crystals from where they were sweating."

Peres and Lautzenheiser have been climbing in Colorado and across the West for about a decade. Being smart in the summer heat is nothing new, Lautzenhesier said. 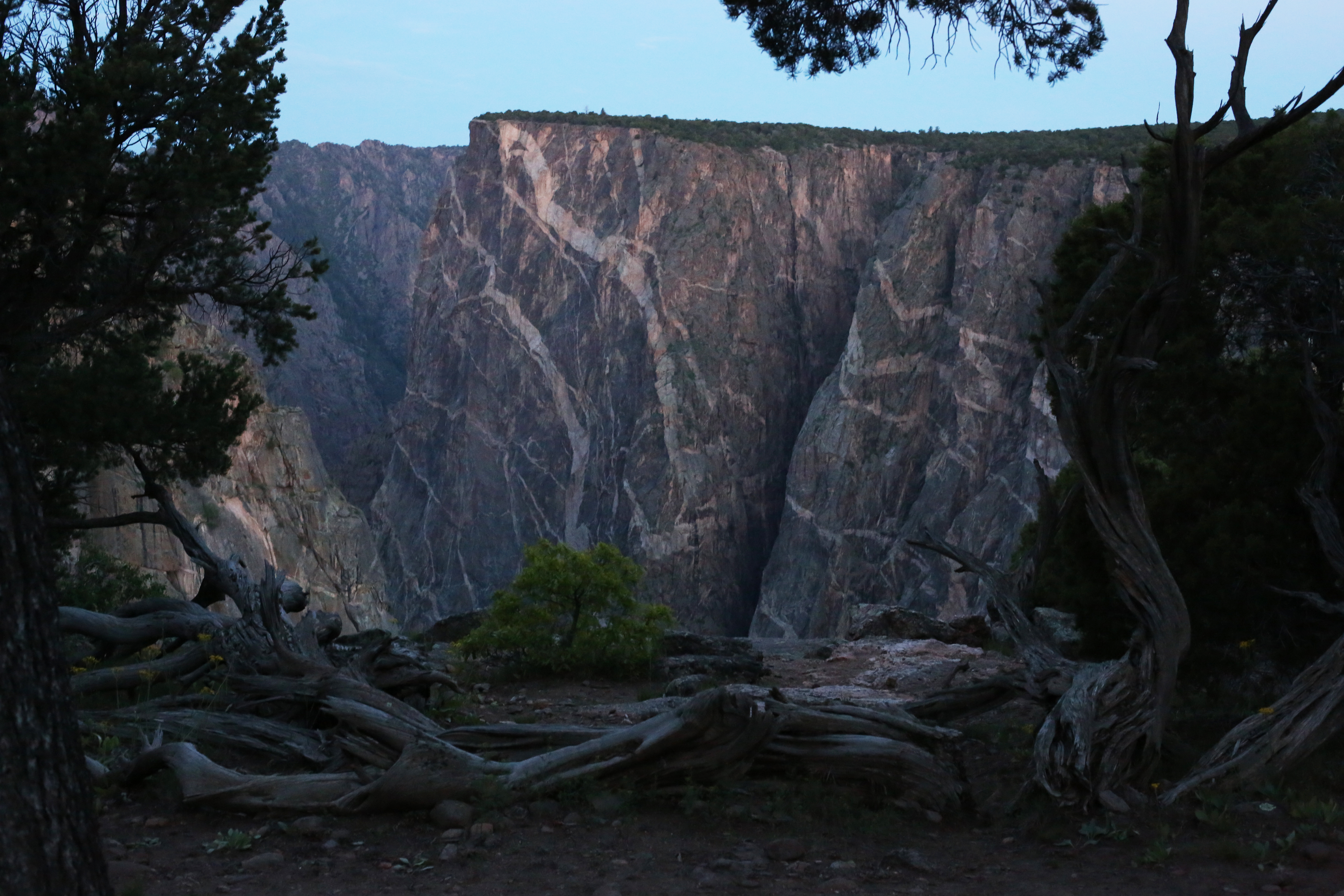 "If you're going to expose yourself to the heat," he said, "then you've got to be smart about it and find the best way to do it, which typically is the shade."

But, as Peres noted, there are other ways to stay cool: come earlier or later in the season next time.

"I think it's an early spring, late fall place," he said.

Permit data from the park shows other climbers are taking a similar approach. The park is seeing a bump in climbing permits issued in April and May, and September and October. 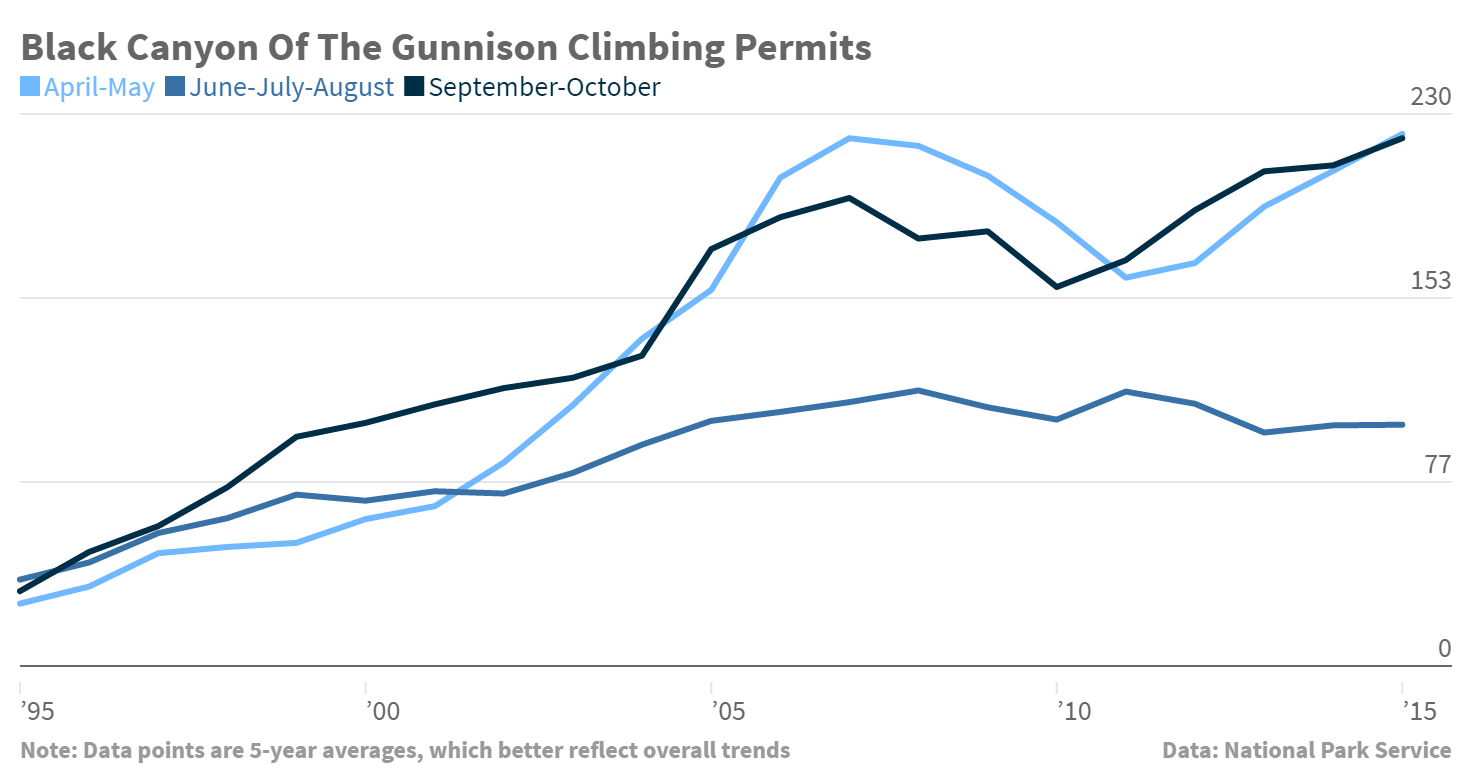 Some of that can be attributed to climbing's growing popularity as a sport, said Ryan Rees, the park's head climbing ranger. 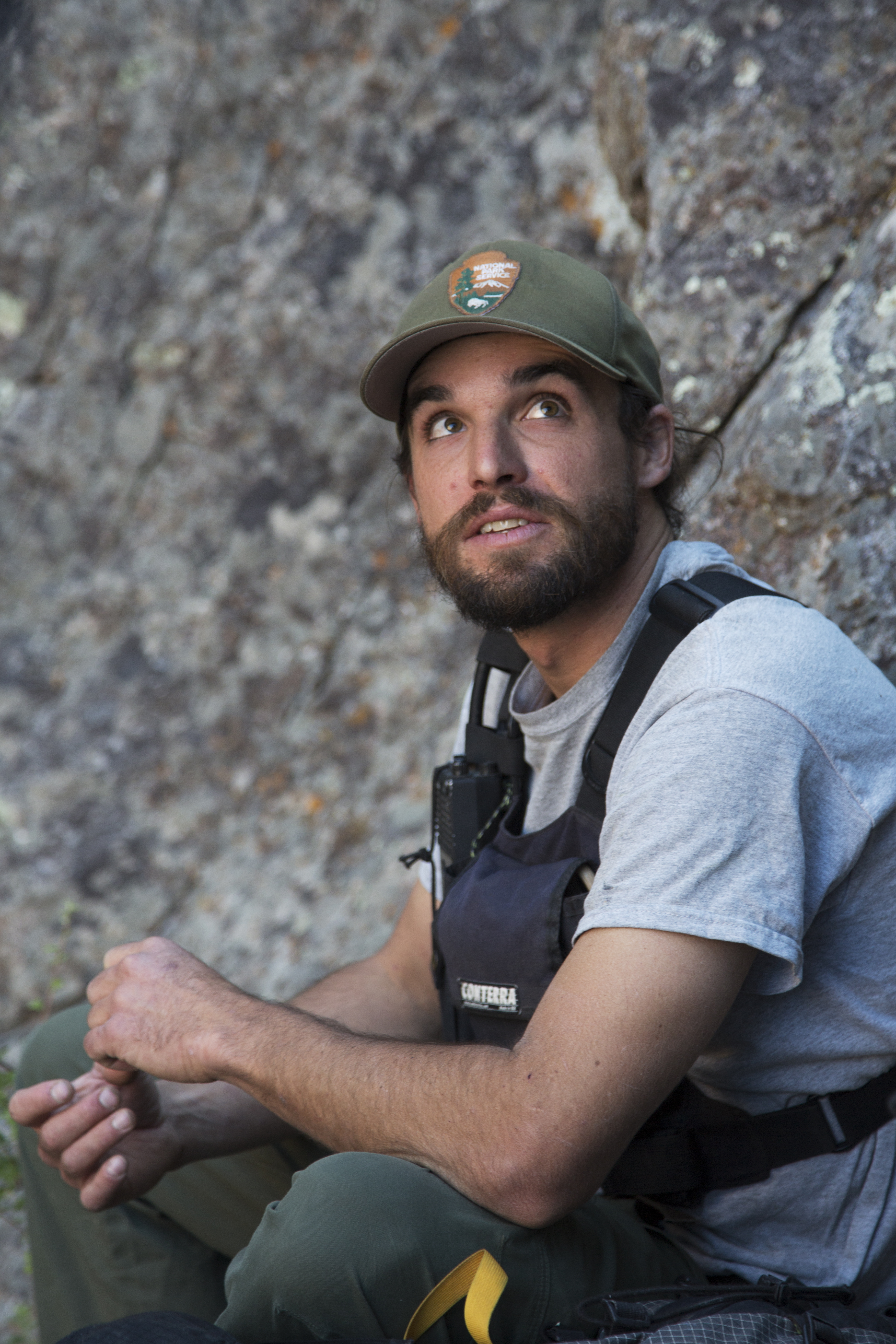 But while May used to mark the start of the climbing season, he said he's seen that shift to April in his decade on the job. And with modeling predicting a continued rise in temperatures, he anticipates it'll shift even more.

"Climbing could start in March," Rees said. That depends on the road to the North Rim Campground, where many climbing expeditions start. "If that road melts out, we'll certainly open the park to the public," he said.

Climbers will find cooler temperatures earlier in the season -- but the days are shorter as well. And with some routes 30 pitches long -- a pitch is the distance the lead climber reaches before anchoring in and belaying his partner -- shorter days can leave some climbers hanging. Literally.

"Sometimes they'll get benighted," Rees said. "People find some sort of ledge to sit on. It gets dark and you just kind of of sit down and make the best of the night. And at first light, start climbing." 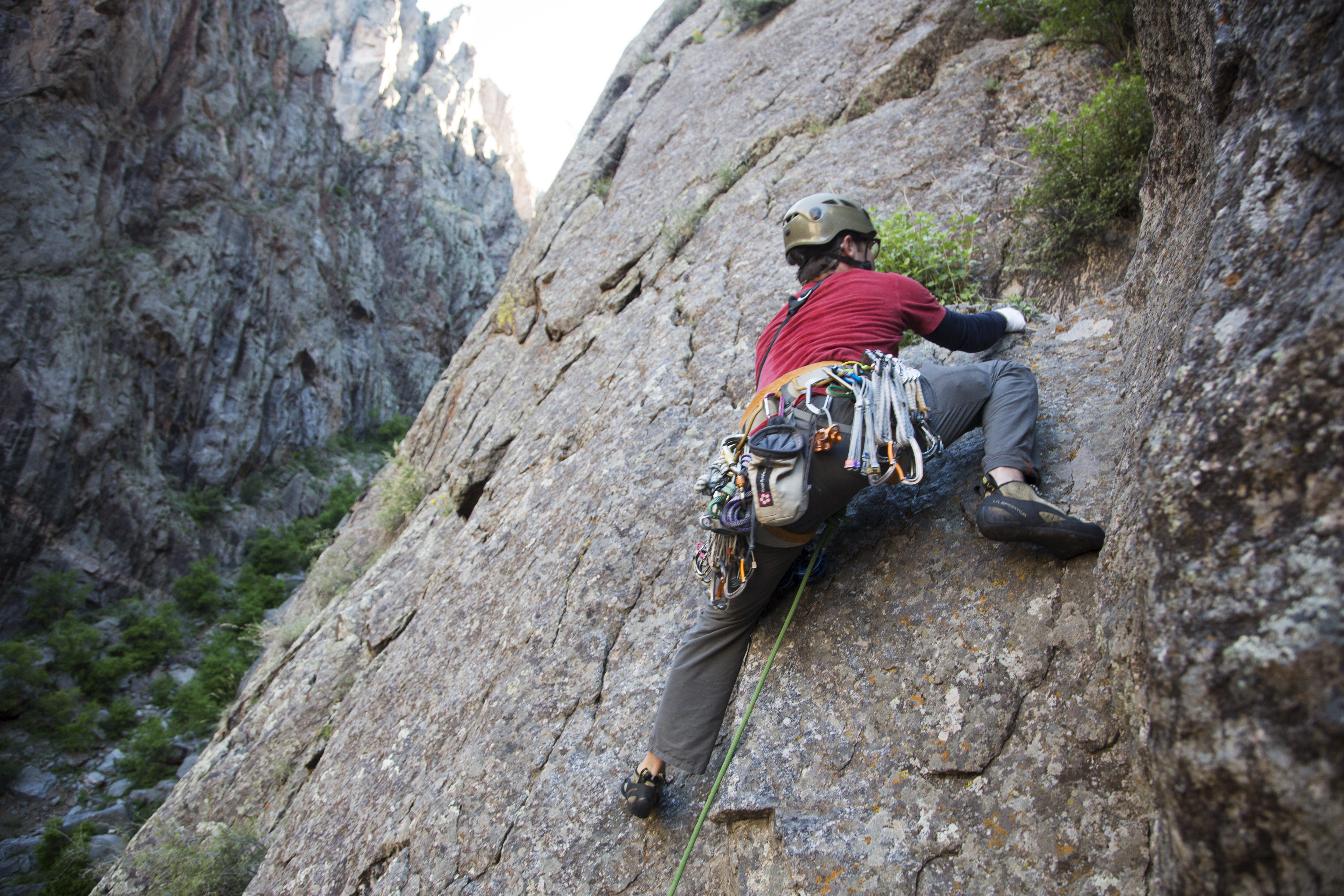 Even though climbing slows during the hottest months, Rees said hiking stays popular. And those hikers aren't always as prepared, whether it be for the scorching sun or the precipitous scramble back out of the canyon. Rees said park staff are stepping up their efforts to keep visitors safe, "so they know where to go, what not to do, and what to do."

Six hours northeast of the Black Canyon, the effects of climate change at Rocky Mountain National Park are as plain as day. Snow melts earlier and the high alpine tundra is suffering as a result. Algae is blooming on lakes that were clear when they were colder. The park's pine forests are dying as well.

But at the Black Canyon, park ecologist Danguole Bockus says her landscape -- which is at a much lower elevation -- is relatively stable so far. But she knows climate change is coming.

"Even if we don't have glaciers that are melting right in front of our eyes, we are going to see and feel those impacts," she said. "We've got to get ready for it." 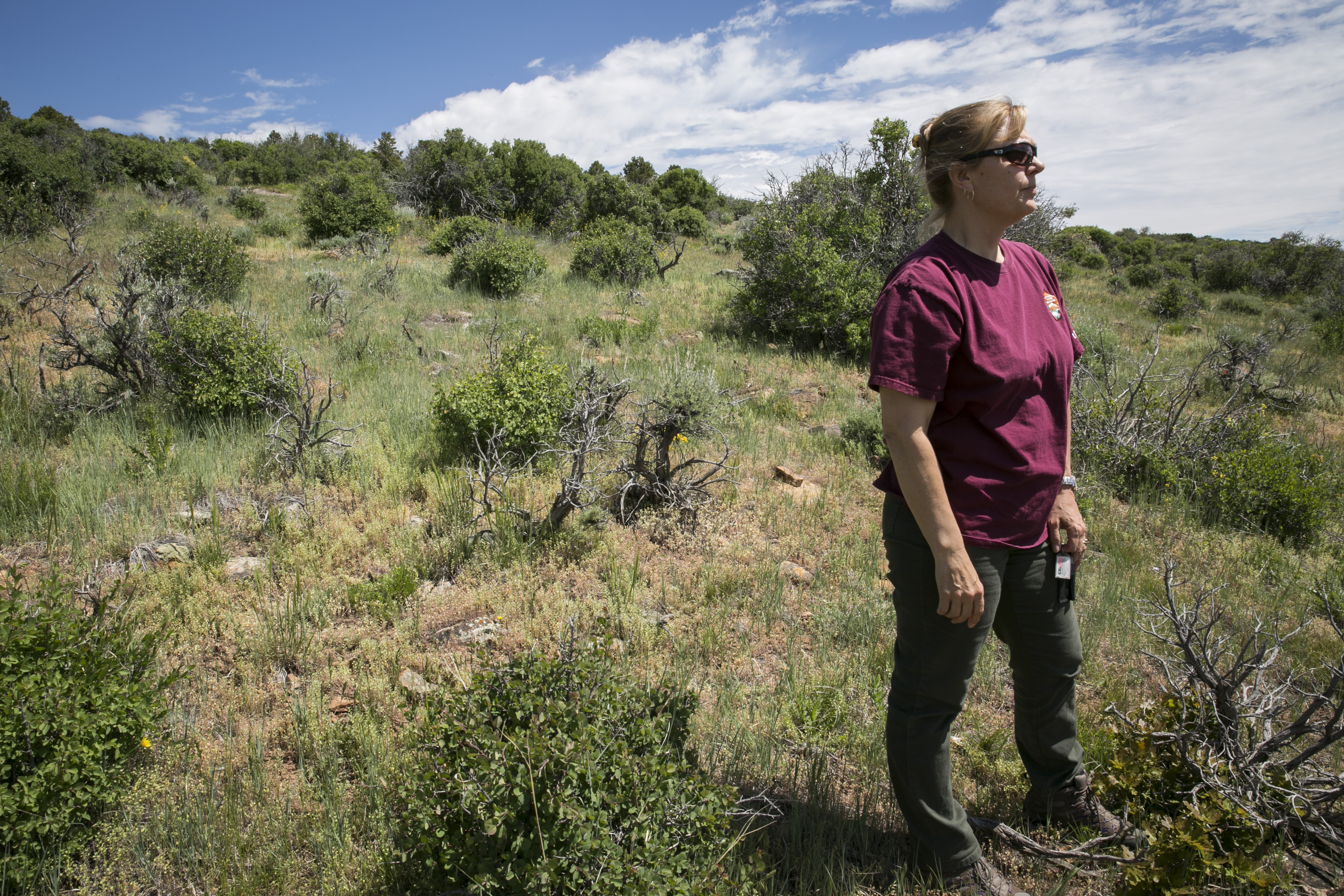 That means protecting native species, and trying to restore them. One of Bockus' big projects now is re-introducing native grasses and shrubs on the site of what was a muddy old cattle pond. She wants it to be good habitat for the Gunnison sage grouse, which is listed as threatened under the Endangered Species Act.

But in some areas, it's difficult to know just what she's trying to restore the park to.

"It's hard to say what it actually looked like 50, 60, 70 years ago," she said. We're kind of going off what we see now and what we think it should look like. And hopefully this will be what will last."

Bockus said the park's staff is in a lucky spot. They know the climate is changing -- but they have a little time to figure out how to best get ready for it.