Denver will soon begin fining short-term rental hosts who don’t register with the city, a task necessary to comply with new rules passed over the summer.

But many have struggled to register; just 327 hosts have obtained the necessary city licenses as of Friday. There are approximately 3,000 short-term rental hosts in the city. The city will begin enforcing the rules, and handing out fines of up to $999 per incident, Jan. 1.

Since the legislation went into effect in July, the city has focused its efforts on educating hosts about the new rules. Hosts must set up a business tax account with the city, obtain a short-term rental business license and post that license number to their online listing. They must also pay Denver's 10.75 percent lodger's tax and other taxes, follow basic safety standards, and buy liability insurance.

Most controversially, short-term rentals are now only allowed in a homeowner’s or renter’s primary residence. That clause was meant to address concerns from neighborhood groups and some city officials about homes being used as de-facto hotels, taking away precious housing stock.

Registering Was A ‘Non-Event’

For some landlords, registering was an easy process. James Reeman, who pilots F-16s in the Colorado Air National Guard and flies part-time for Delta Airlines, rents out his Sloan’s Lake duplex about five to six days a month on Airbnb.

“I'm stepping in time, if you will, with the current regulations. It was kind of a non-event, frankly." Reeman said.

For him, Airbnb "has been really beneficial," making it easy to a make a few extra dollars with his home that would otherwise sit empty.

“I figure if there's going to be rules in place, it's not too hard to follow them." 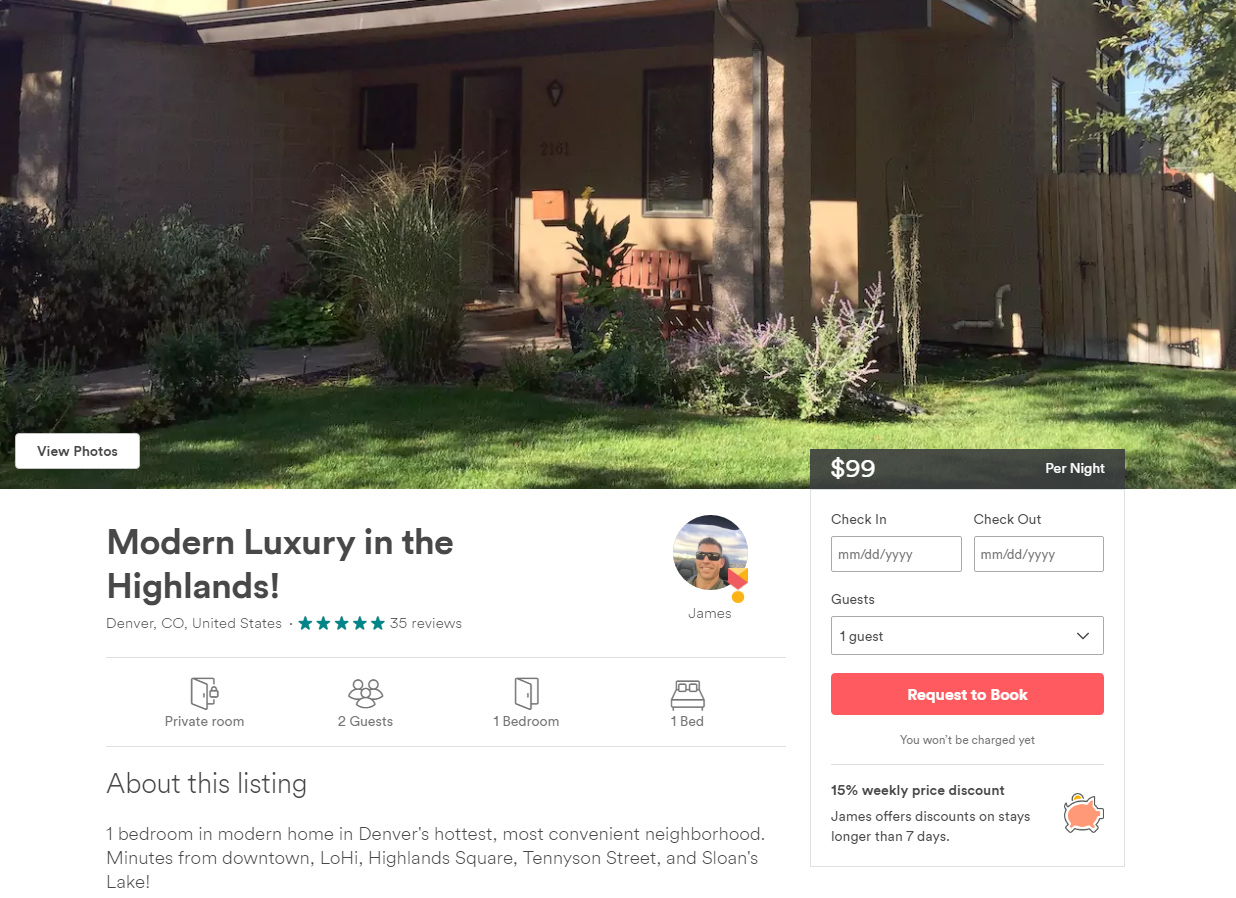 In other cities, like San Francisco, hosts must apply for permits in person. That’s led to low compliance with that city’s rules. But in Denver, hosts can register online. Christopher Nulty, a spokesman for Airbnb, said Denver’s online-only registration system is the first of its kind in the world.

“We're eager to see how it works out and if it provides the city with what they need in order to enforce the rules,” Nulty said.

The company sent an email telling hosts to register with the city, and has a page on its website explaining Denver’s rules (it also has similar pages specific to Aspen, Boulder, and Snowmass). Before Airbnb hosts can list their property, the website tells them to educate themselves on local laws. And the city will soon launch a marketing campaign encouraging hosts to register.

But it appears many short-term rental hosts have not yet received the message.

Airbnb says there 3,000 active hosts in Denver. Most listings are whole home rentals, about a third are private room units, and a small percentage are shared rooms, the company said. A CPR News data scrape of Airbnb.com on Dec. 14 showed slightly fewer hosts: a little more than 2,500 who listed 3,160 units. Either way, it is by far the biggest platform in the city, with nearly twice as big a footprint as it had in November 2015.

On VRBO, which is mainly used for professional vacation rentals, there are more than 300 rentals. Flipkey lists another 200 units.

But some units are listed across more than one platform, and listings change often. So trying to keep track of exactly how prevalent short-term rentals are and who runs them is an exceedingly difficult task.

On top of that, the city’s registration website has suffered from technical issues. A new version is expected to launch soon.

What Is Success, Anyway?

Batchelder said he’s not measuring success by the number of hosts who register. Rather, he said, that will be judged by whether the new regulations help city staff manage the impact the rentals have on neighborhoods.

City staff now have a few new tools at their disposal. In addition to existing staffers who will be assigned to enforcement, the city will hire a new staffer dedicated to short-term rental issues. Denver is also negotiating a contract with a third-party service that will scrape host data from various platforms and provide it to city inspectors. The city’s 2017 budget allocated $70,400 for the service.

“We sort of think of this as our robo-inspector that can work 24 hours a day, seven days a week who can provide us with that information digitally,” Batchelder said. “Our inspectors can use that information out in the field.”

The decision to use scraped data to help with enforcement is notable. Recently Airbnb struck an agreement with New Orleans that company officials described as a new model for how it would work with cities. Now, Airbnb hosts there can register directly with the city through Airbnb.com. Host data is then given to the city for enforcement purposes.

That’s a marked contrast for a company that had fought bitterly with city regulators across the world in recent years to keep host data private, among other issues.

Nulty, Airbnb’s spokesman, said it’s too soon to know if the New Orleans model will work in cities like Denver. But he reiterated that Denver’s online registration system is a good approach in the meantime.

"When you create a process where the system is easier,” Nulty said, “...the city won't have to rely on third-party data in order to make the rules work.”

That’s exactly what Denver intends to do. The city’s online registration system and enforcement mechanism can work with or without help from the platforms themselves -- though Batchelder said the city appreciates the cooperation it’s received from Airbnb.

“We’re really blind to the platform,” Batchelder said. “The license is for the host and they have to meet the requirements. Whether you are VRBO, Homeaway, Airbnb -- it really doesn’t matter to us.”

In San Francisco and New York, Airbnb has implemented a “One Host, One Home” policy. The company monitors its site for hosts for multiple listings and removes them when found. Nulty wouldn’t say exactly how Airbnb would help with enforcement in Denver.

"If the city has identified that folks listing homes other than their primary residence is an issue, then we want to work with the city on the best way to address that,” he said.

Still, some city officials took note of Airbnb’s recent shift. Councilwoman Kendra Black asked Batchelder if the change will make it easier for Denver to enforce its rules.

Expedia, which owns Homeaway and VRBO, did not respond to multiple requests for comment for this story. Vacation rentals typical of those websites were most likely to be affected by the city’s new rules.

For now, Batchelder said the city will continue to lean toward educating rather than fining hosts who don’t comply with the new rules.

Many hosts are still unclear on what’s required of them. James Carlson, a real estate broker, used to rent his apartment on Airbnb but stopped after it became too much work. Now he teaches a class on Airbnb at Colorado Free University to prospective hosts. Students learn how to price their unit, take good photos -- and navigate Denver’s new rules.

Carlson said many want to buy an investment property and list it on Airbnb, where the payoff can be higher than traditional long-term renting. But he said he tells them that would run afoul of the city’s primary residence rule.

“There are some people who are looking for creative workarounds. I always tell them to not do that,” Carlson said. “You really need to stick with the rules because it's a lot of stress if you're trying to do that workaround."

Carlson said the city’s done a good job of balancing the needs of neighborhoods with the needs of hosts. But he’s still not a fan of the primary residence rule. He and his wife bought an investment property earlier this year and were tempted to try Airbnb again. They instead rent it medium-term to visiting business people and nurses.

That’s not exactly what the City Council had in mind when they passed these regulations with an eye on preserving housing stock for full-time residents. But it’s a little bit closer, at least.

Editor's  Note: An earlier version of this story misstated the number of nights James Reeman rents his duplex on Airbnb. He says it's five to six, not 10. The current version of the story is correct.

The number of short-term rental licenses the city has issued was updated at 11:30 a.m. Friday.