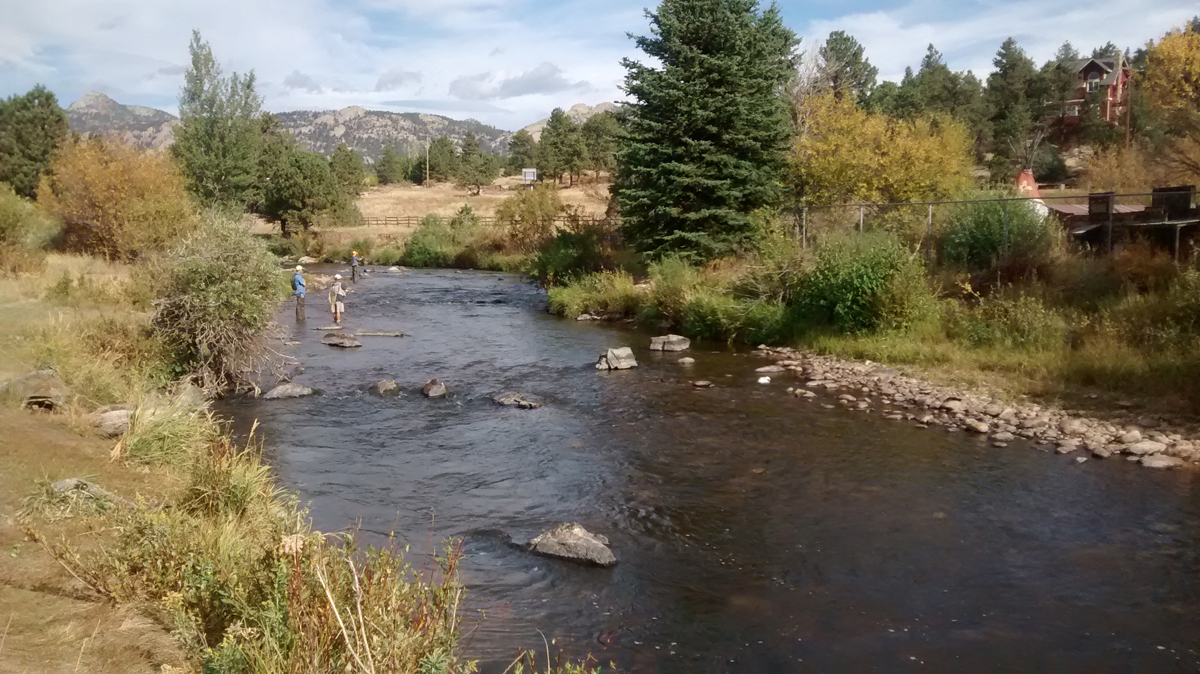 Maeve Conran / Connecting the Drops The Big Thompson River runs from the Rockies in Estes Park across the plains into Weld County. This stretch suffered significant damage in the floods of 1976 and 2013. 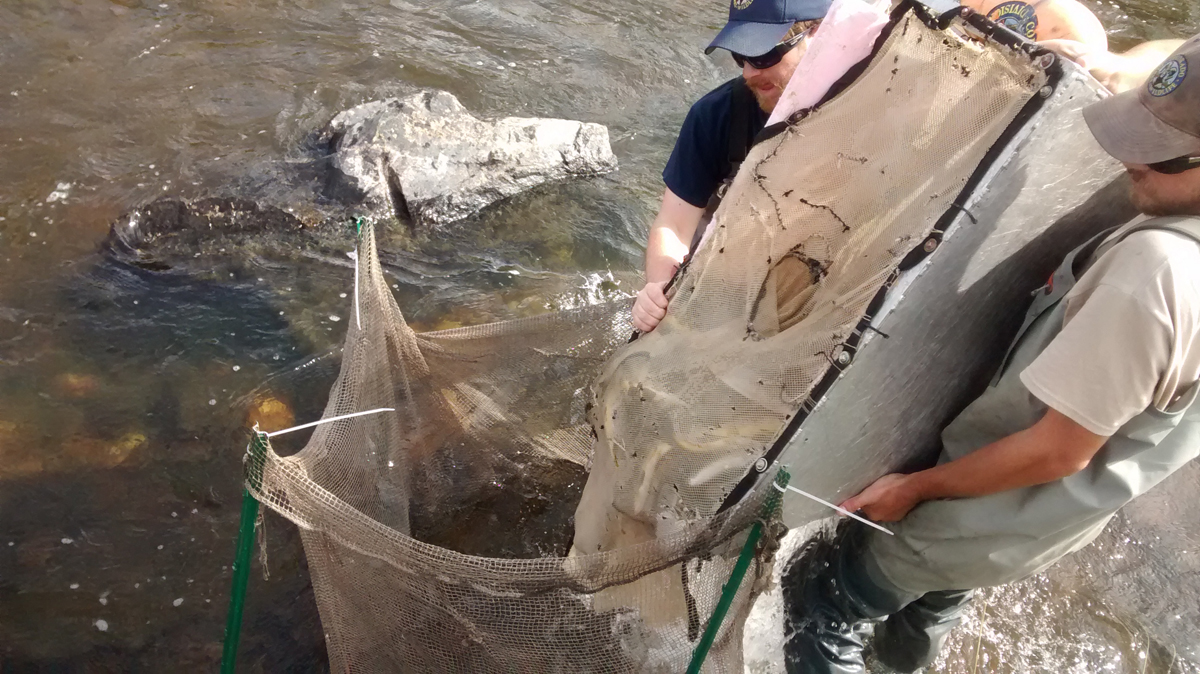 Maeve Conran / Connecting the Drops Biologists take two passes at catching the fish. The first pass captures significantly more fish. The fish that are collected are stored in a holding pen until they are weighed, measured and counted, before being released. 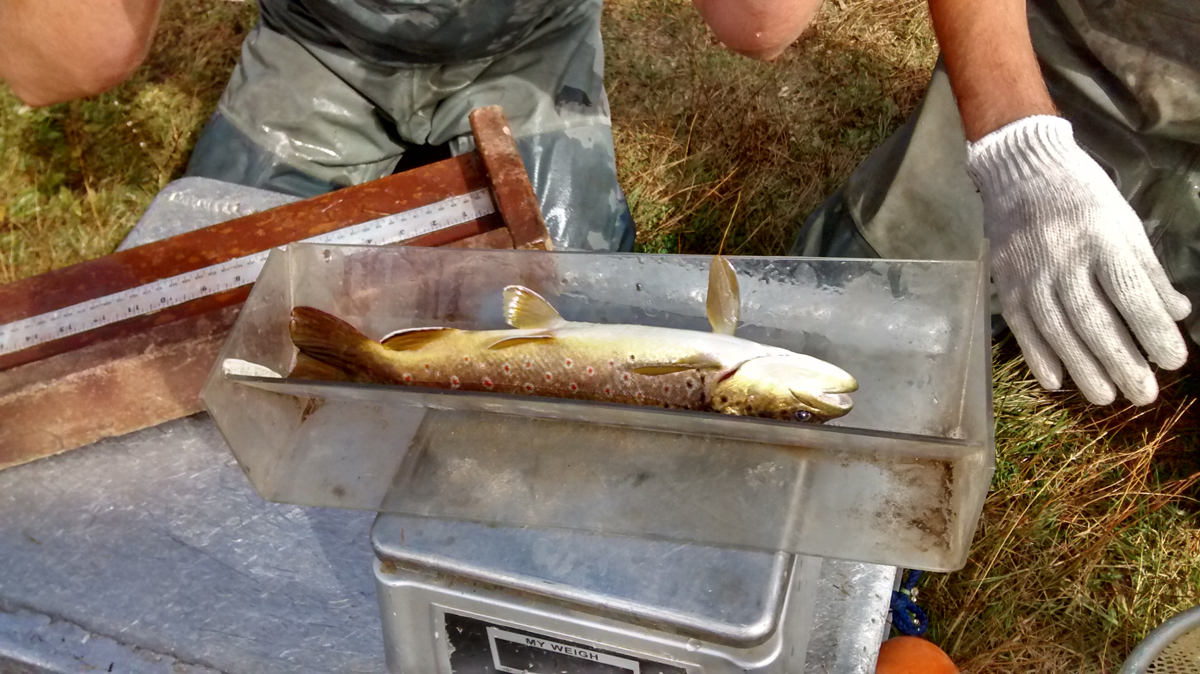 Maeve Conran / Connecting the Drops Biologists weigh the fish during the annual fish count on the Big Thompson River.

About three years ago, flood waters rushed down the Big Thompson River through Estes Park and eastward to Loveland, destroying whole stretches of the river channel and adjoining roads. That flood echoed a similar one 40 years ago that killed 144 people, destroyed countless homes and decimated the riverbed. Now, roads are being repaired and the eco-system is slowly recovering. That recovery is crucial for the economy of local communities.

The annual fish count on the Big Thompson River is about to start, and Benjamin Swigle, an aquatic biologist with Colorado Parks and Wildlife, gives some last minute safety reminders to his team.

"Alright, are we ready? Ok, safety briefing. Don't touch your hands with the water," he calls out to his team.

The fish counters walk through the water with electrodes that emit a small charge. It's not enough to kill the fish, just enough to stun them so they can be scooped up for the fish count.

"What we're indirectly measuring through the trout is how much bug life is going on, if there's enough food in there. Availability of clean gravel, essential for reproduction," says Swigle.

Every fall, biologists count the fish to get an overall view of the river's health.  A healthy river means a lot of healthy fish, trout in this case, rainbow and brown. And a healthy fish population means a healthy local economy with jobs dependent on the fishing and recreation industry.

"People come to Estes Park for a lot of reasons, and fishing is one of them," says Jack Deloose, who has been a fishing guide in Estes Park for four years. "We get an awful lot of people. We'll probably end up with 600 people that will fish with us this year."

An estimated 50,000 anglers descend on this area annually, spending on average $103 each on everything from fishing guides and equipment to lodging and food. On this fall morning, Jeff and Elizabeth Anderson from Austin, Texas are enjoying a day's angling on the Big Thompson.

"We're here for many things," says Jeff Anderson. "One of them just so happened to be fishing. We saw that it was available here and a beautiful creek and that's why we're doing it."

About $4 million a year flows into local coffers as a result of this river. As so much tourism depends on the fish, the results of the annual fish count are closely watched.

The biologists conduct the count at two separate sites. This area is in good shape. There are shallow spots where the fish like to spawn, and rock pools for winter habitat. Further downstream, it's a different story.

Immediately after the 2013 flood, the fish population there was zero. It slowly recovered, but a concrete spill into the water earlier this year during road repairs set the recovery back.

Permanent repairs have begun on the parts of the river and adjoining highway that were most damaged by the floods, but Swigle says the repairs will also tackle problems dating back 40 years.

"We've been educated from two floods, 1976 and 2013. In both cases, the flood won and the river lost," says Swigle. "Now we're building a road that is resilient in the face of flooding, so when it happens again—and it will—we won't have to spend $500 million to repair the road."

The repairs will raise the adjoining road and create a wider floodplain. That will help the river cope with future floods.

After collecting the fish, the task of counting, weighing and measuring them begins. The number of fish in this stretch amounts to almost 4,000 total per mile, indicating a healthy section of the river. Further downstream, as predicted, the fish count is much lower, in the low hundreds of fish per mile. But Swigle is hopeful that those numbers will improve in the future.

"Ultimately we'd like to see the number of trout that we found here, downstream in the same abundance," Swigle says.

Repairs on that lower stretch started in October and will likely continue through June 2017. It's a multi-million dollar project, but it will be money well spent for the local economy if it means more river to fish in and recreate on.

Connecting the Drops is a collaboration between Rocky Mountain Community Radio Stations and the Colorado Foundation for Water Education.  Find out more at YourWaterColorado.org.  Support for this is provided by COBank.