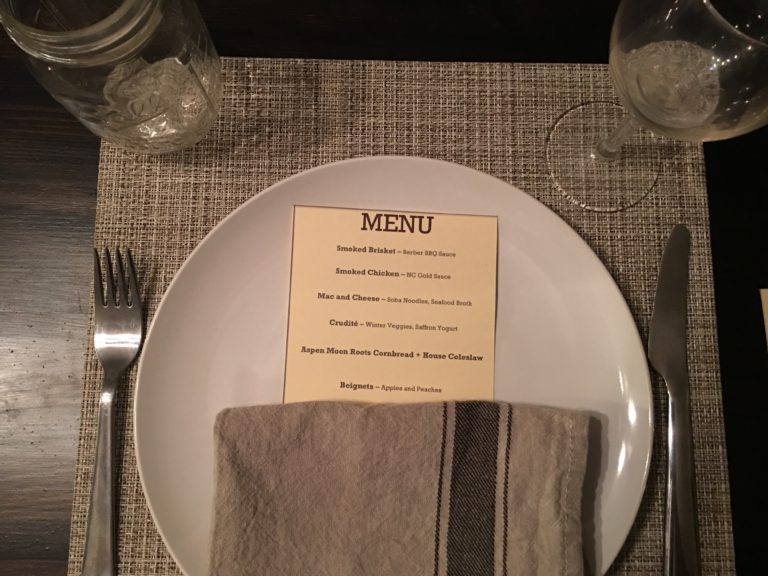 Chef Terence Rogers of TBD Foods in Denver is bringing back casual, in-home dinner parties with an intimate setting located right inside his own quaint Cheesman Park apartment.  We got to attend the winter smoke-out dinner on Friday, February 3, enjoying a self-serve, barbecue-inspired dinner at a table of six.

The entirety of the dinner and setting itself was refreshingly chill.  We started with a buffet of “soulful sides” consisting of cutting board topped with winter vegetables crudité with saffron yogurt. A cast iron skillet held the mac and cheese made with soba noodles cooked in seafood broth and topped with crunchy, barbecue-flavored potato chips. Another skillet of Aspen Moon Roots cornbread, a plate of duck fat biscuits and large bowl of house coleslaw adorned the table. Helping ourselves to generous portions, everyone enjoyed slices of smoked brisket and moist pulled chicken. Fresh, mini beignets topped with sautéed Honeycrisp apples in a peach butter completed the relaxing meal.

Rogers ended up sitting down to enjoy dessert with us and chat further about his cooking background and how he came to start throwing these lovely, culinary get togethers with TBD Foods.

“I came very close to going to law school and becoming a lawyer,” says Rogers. “I went to college for economics and took the LSATs but didn’t know if I wanted to hop right into more school. So I took some time off. I worked as a bow and arrow instructor at a YMCA camp, drove around the country, parked cars in Boston at an apartment complex, wanted to move out here to become a ski bum at Breck or Vail but didn’t have the money. So I ended up moving up to Vermont. Killington is the big ski resort out there. I worked as a cheesy photographer at the top of the lift.  I needed a little extra money to help pay bills and rent and I had really enjoyed cooking for myself and my roommates in college. I had already written a business plan for a food truck in Boston.”

Roger’s cooking aspirations had already begun to take root, now was the time to dive in.

“I wanted to learn more so I got a job at this wood-fired pizza place called Outback Pizza,” he says. “It’s a pizza oven that was built by some guys and then a restaurant that was essentially built around that oven. So we’d do like 300 pizzas a night. After a month-and-a half, thinking I was going to get fired every day, not knowing the rhythm, I was told I was on the A-team lineup. They were great, they taught me a lot, and the guy who was the kitchen manager had worked in some four-star hotels so he would always get on my case about things. It was a great learning experience, but then I moved back to Boston still wanting to work on a food truck.”

“I got a job on a truck called The Dining Car, the owner/chef used to be the head of catering at L’Espalier in downtown Boston,” says Rogers. “It was a French restaurant, $100 per person, fine dining, very refined. He would take the time and stay late with me.  He’d send me home with stock or Béchamel sauce, or we’d make dumplings, case sausage. … He was a great mentor for me.”

“From there I wanted to continue to learn, so I moved to this place called Bronwyn, located in Union Square in Somerville,” says Rogers. “It had just opened up, farm to table, Eastern European-type of place, super-intense. That year the restaurant got Top 100 Restaurants in the country.  After a few months I realized I needed something else, so I got a job part-time doing some marketing but shortly after I started to miss the kitchen. I saw a position at Highland Kitchen working two days a week and I really loved their food. It wasn’t anything fancy, kind of Southern, but a great bar and one of my favorite places to go still.”

“When I was working part-time in the restaurant and in the office I saw this woman who was hosting dinner parties at her apartment in Cambridge and I thought, ‘I can do this,'” says Rogers. “The apartment I lived in was like this one, a 100-year-old home, huge. We used the pool table as the dining table covered with cheap plywood. I built a tabletop and went to Salvation Army to get linens, tablecloths, plates, silverware. By April 2014, we started hosting dinner parties. By July, we were having 10 to 12 people pretty consistently. By the fall people started asking me to do catering and personal chef services for them. That winter we got a big catering event, a Christmas party for my roommate’s boss, that got us set up as a legitimate business. The following year things really started to take off.”

By summer of 2016, Rogers was staying busy cooking, catering and hosting parties. All he lacked was an official name.

“We’re ‘To Be Determined Foods'”, he says. “It plays with the seasonality of it and things changing up. I figured I’d just come up with a name later. I was getting advice from a family friend on the business plan and he said, ‘I love your name, it fits so well!’ Because on my cover page it just said TBD… It was an afterthought but I thought it was pretty good. So I just stuck with it and my mom designed the logo.”

By July of that same year he also fulfilled his mountain wish, finding himself in Colorado when he and his girlfriend ended up moving from Massachusetts to Estes Park.

“I was just doing some personal chef work,” says Rogers. “We were debating if we wanted to move back to Boston, but I had always wanted to spend at least a winter or two out here. So we just stayed and found this apartment. It was a slow start in the fall but we were having these dinner parties a few times a month. In the past month or so, we have been getting really busy with catering and more personal chef stuff.”

Denver is growing on the couple and Rogers is appreciating the up-and-coming foodie city.

“There are great things here like the Denver Central Market,” says Rogers. “It just seems like the younger generation are really into food, cooking and farmers markets.  So I think it’s inevitable for Denver to be happening. It’s a really growing food scene with a lot of new restaurants opening.”

Coming from chilly Boston, Rogers is familiar with a shorter growing season and is interested in sharing some of their East coast influence to keep Colorado’s farmers markets open through the fall and winter.

Rogers has his own ideas on how to bring seasonal elements into his cooking year-round and aspirations as TBD Foods continues to grow.

“I’d like move towards working directly with the farm. Spending the summer pickling and preserving and trying to incorporate those wonderful flavors throughout the year.”

Living out west offers Rogers opportunities to broaden his cooking repertoire into the beer and cannabis scene. He is open to changing things up and accessing unique Colorado proteins.

“It’s been fun working with new ingredients here,” says Rogers. “Back in Boston, it’s heavy on the seafood, here there’s more wild game and the beef and lamb are better.

“We’re going to be working with some local breweries to host some pairing dinners,” he adds. “We’re in talks with Great Divide, 4 Noses, Fiction.”

With no formal cooking training, Rogers has still managed to capitalize on his culinary talents and feels that it’s real world application that’s allowing him to grow as a chef.

“I’ve found working in kitchens has gotten me more attuned to the stress and the pace,” says Rogers. “Give me a bunch of burgers and throw a bunch of orders at me and keep me busy for eight hours. I’m having a blast. Throw some music on. That flow state mentality, being in the zone. Honestly, that’s what I love. I feel like I could heave a sautée pan against the wall and it would just bounce bounce back and I could catch it.”

“I used to be super shy, not social, but once I started working in kitchens I found this confidence,” says Rogers. “I get to get up and cook food and chop vegetables and make interesting stuff and share it with people like you.”

Rogers expresses a very accessible, simplistic approach to his cooking which jibes well with the casual nature of his in-home hosting.

“I love foods that are simple and just really well-done,” says Rogers. “When I worked at Bronwyn I did all the sausage-making and I got this great appreciation for taking, here’s scraps of pork, a bunch of toasted spices and stock, and just spend a lot of time processing it.  … Look at things like duck confit, it’s just that we don’t have a refrigerator so we’re just going to leave things in fat for a while and hope it preserves it. It’s amazing, but you treat it well and you take care of it and you can make something really good out of it.  Brisket, it’s a heartier cut, it’s got a lot of fat on it, it’s not a steak. But people found, cook it slow and low, put some smoke into it. Brisket’s in almost every culture. The American South, pastrami, corned beef, you have all these different varieties of the same cut because it was economical.”

“To me food should be good because it’s good. I would want my family to come to any dinner and enjoy it.”

Catch TBD’s next dinner party Friday, February 24. The theme is potatoes, so expect spuds in each course.