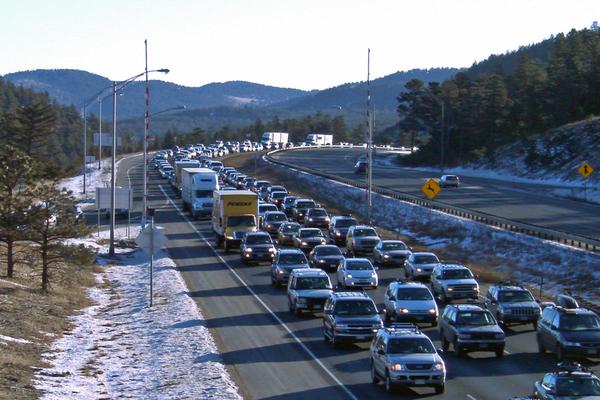 Wednesday was a long day at the State Capitol. Eighty people signed up to testify on a massive transportation funding bill that if passed, would ultimately end up before voters in the fall.

During a more than seven-hour hearing before the House Transportation and Energy Committee people expressed lots of thoughts on how to improve Colorado’s roads -- and how to pay for them. Lawmakers also offered several dozen changes to House Bill 1242 but, in the end, the measure passed along party lines.

The measure calls for an increase of sales taxes by 0.62 percent over the next two decades, raising the rate to 3.52 percent overall. This would bring in about $700 million each year. The proposal would also allow Colorado borrow up to $3.5 billion for projects.

“We aren’t keeping up with the current system that we’ve got,” said House Speaker Crisanta Duran, a Democrat.

She’s one of the main sponsors, along with Republican Senate President Kevin Grantham.

Prior to the start of the session, Gov. John Hickenlooper and legislative leaders agreed that improving roads and fixing infrastructures like bridges and dams was the top priority for 2017. According to the Colorado Department of Transportation, Colorado faces a $9 billion funding shortfall over the next decade.

But to make that happen, legislators say taxes must go up.

“This isn’t just about where we are in the year 2017. This is about generations that will follow us many years to come. I ask you to let the people of Colorado decide,” said Duran.

The first several hundred million dollars raised would go to the state. After that, 70 percent would go to local communities and another 30 percent for transit projects such as bus systems, shuttle services, trails and lite rail.

During the hearing, business and transportation groups, local governments, citizens and disability advocates all lined up to testify. They were nearly unified in support of the measure, although many suggested changes.

“This bill is something we need to get done and it needs to be done sooner rather than later because we are being left behind,” said Phil Chamberland, a Gunnison County Commissioner. “We’re going to lose our competitive edge and I think that would be a travesty.”

“People are tired of gridlock,” said Marc Williams, the mayor of Arvada.

During his testimony he referred to himself as a staunch conservative and told lawmakers that cities are losing business because of clogged roads.

“We deserve an opportunity to have a yes or no vote on this,” he said. “Cities are giving up a portion of their sales tax opportunity to support this.”

Multiple business groups, including the Denver Metro Chamber of Commerce, the Colorado Business roundtable and Colorado Ski Country USA said the measure would help the state’s economy stay strong and is crucial for moving people and goods efficiently across Colorado. Former Democratic transportation committee chair Max Tyler noted that the neighboring states of Nebraska, Wyoming and Utah have all recently raised taxes for roads.

“These are all very conservative states that have done that,” he said. “Believe me they [Utah] are taking business, they are taking vacation people. They’re taking a lot of money from the state of Colorado because they are improving their roads.”

But despite strong business and Republican support, it wasn’t enough to convince the GOP committee members to back it.

“Before we go and have the conversation with the voters about more of their hard-earned money, we need to look at our existing resources and leverage those first, and that’s just not a part of this bill,” said Republican Rep. Dan Nordberg of Colorado Springs.

His colleague, Republican Rep. Jon Becker of Fort Morgan, added an amendment to eliminate vehicle registration late fees -- potentially costing the state $20 million in revenues it now collects. But he still voted against the underlying measure.

Becker said that too much money is going to multi-modal projects which he believes don’t benefit rural communities.

The proposal is expected to pass the House, but may face more hurdles in the GOP-controlled Senate. Even though the Senate’s top Republican is on board, it needs to clear several Republican-led committees before it gets to the floor.