Growing up in his native Colombia, getting across town wasn’t as simple as jumping in the car for Alejandro Henao. His family of five had just one vehicle, so inevitably someone had to catch a bus or beg a ride from a friend.

Now, years later, Henao has just earned his PhD in civil engineering at the University of Colorado Denver. His experience in Colombia inspired him to write his dissertation on how ride-hailing apps like Uber and Lyft have changed transportation. There isn’t much peer-reviewed research on the matter because both companies are protective of their internal data.

Henao solved that problem by driving for both companies in the Denver metro area. He surveyed more than 300 of his passengers, logged his own mileage while on duty, and came to a number of noteworthy conclusions. Here are three of them:

Ride-hailing apps add traffic to metro-area streets because they replace transit, bicycling, carpool and pedestrian trips, Henao said. About a third of survey-takers told him that they would have used one of those methods if not for Uber and Lyft. 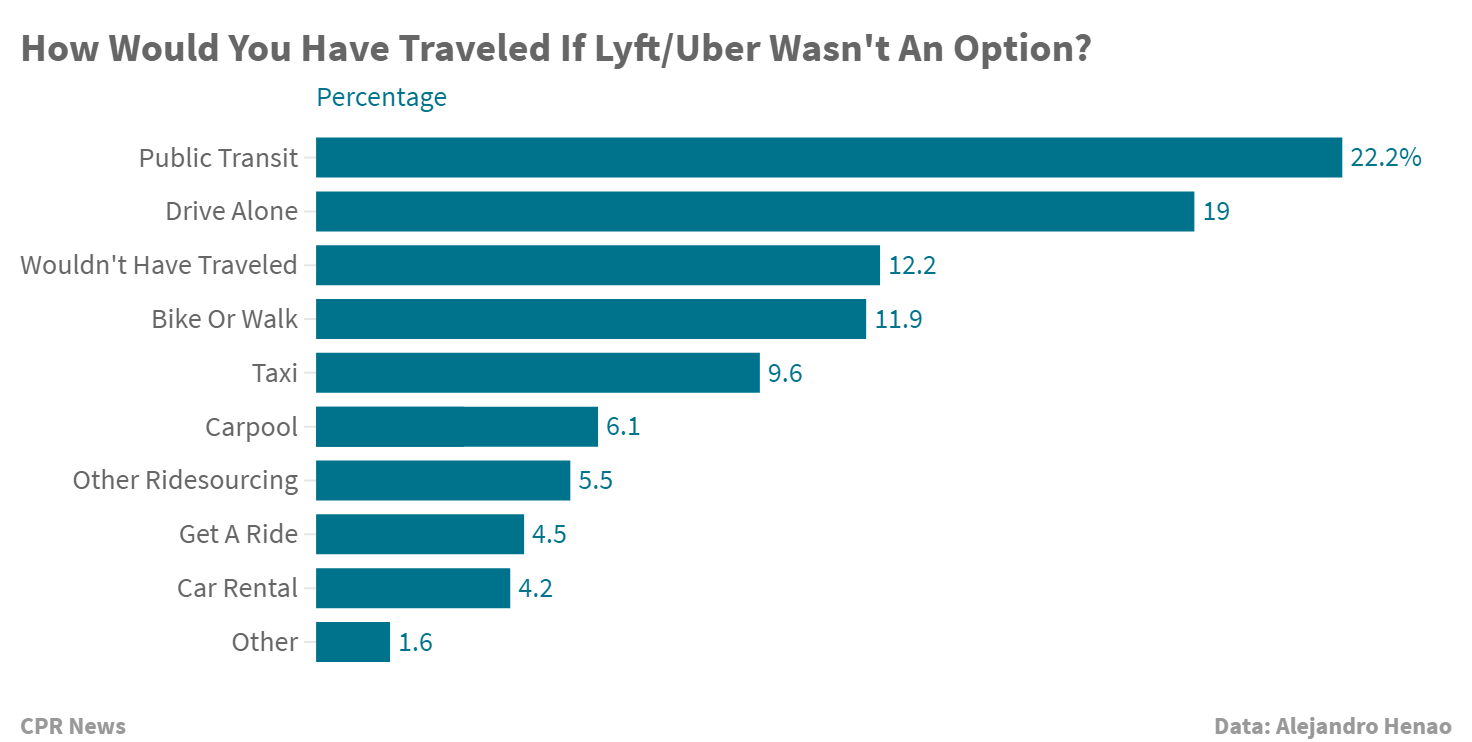 “The worst scenario is when someone says they would've walked or biked or taken transit,” Henao said, because those methods do not add any traffic to the streets.

Drivers for ride-hailing services are not immune to “deadheading,” a term from the taxi industry that describes time spent driving between passengers. If you’re going five miles, the driver may have to travel three or four miles to pick you up, Henao pointed out. That makes it a less efficient method of travel.

To measure efficiency, Henao compared passenger miles traveled to vehicle miles traveled. For example: A single-occupancy car means the passenger and vehicle travel the same distance. With ride-hailing, however, a car needs to travel 69 extra miles for every 100 miles with a passenger according to Henao’s data.

"We're putting more vehicle miles traveled into the system and moving around the same amount of people,” he said.

It’s difficult to know how much Denver-area traffic has worsened because of Uber and Lyft, partly because it’s nearly impossible to know how many drivers each service has (or share between them). Lyft declined to say, and Uber did not respond to a request for comment. They are also not required to report driver figures to the Colorado Public Utilities Commission, which licenses all ride-hailing drivers in the state.

The Brookings Institution estimated there were about 4,680 Uber and Lyft drivers in the metro area in 2014, but considering how often drivers turn over and how old that data is, that number should be taken with a grain of salt.

But Henao said if his numbers could be replicated nationwide, that would mean Uber and Lyft cars are adding about 5.5 billion extra miles of use to U.S. roads per year.

The efficiency of Uber and Lyft could improve if more passenger choose their carpool options -- UberPool and Lyft Line. Henao’s data suggests that most people choose those options to save a few bucks -- and because it’s unlikely they’ll be matched with another passenger before the ride is over. According to Lyft, Lyft Line makes up 40 percent of all trips in the Denver area.

3) Maybe Uber And Lyft (And Self-Driving Cars) Will Be The End Of Parking?

Avoiding the rigmarole of parking was one of the top reasons survey-takers gave Henao for taking Uber and Lyft (the other being because they planned to go out for a drink or two). The implications of that are significant: If fewer people park downtown, cities will need fewer lots and garages.

"Parking is going to change significantly with autonomous vehicles and is starting to change with Uber and Lyft,” Henao said.

The transportation industry is starting to think about what that means for infrastructure, said Randall Rutsch, a senior transportation planner for the city of Boulder. New parking structures, for instance, could be pre-designed to have a second use when needs shift.

He thinks of Uber and Lyft as a stepping stone between privately owned cars and self-driving cars. The companies are subsidizing rides now and will eventually rely on autonomous cars for their long-term business plan.

“Even before they are autonomous, we want to do what we can to make those clean vehicles, hopefully shared vehicles. So that you've got more than one person in the vehicles; so that you're hopefully reducing vehicle trips, not adding to them,” he said.

Rutsch said Henao’s research is valuable to transportation officials like himself.

“He's really the only one in the country at this point that has actual data on behavior of passengers,” Rutsch said.

Boulder is starting to explore when to make policy changes in regards to self-driving cars, Rutsch said. He thinks of the future could go one of two ways:

The city, Rutsch said, wants to encourage the “heaven” scenario.

What Do Uber And Lyft Have To Say?

Lyft spokesman Scott Coriell said Henao’s analysis is at odds with the company’s own research, which claims 34 percent of its passengers say they “would avoid owning a car entirely because of Lyft.”

"Our goal is a world where we spend less time in traffic and more time with one another,” Coriell said. “That's been part of our DNA since day one."

Coriell also cited two national surveys -- one from Pew and another from the American Public Transportation Association. Each found that passengers who use ride-hailing services are more likely to use public transportation and less likely to own a car.

Henao said neither independent survey tried to establish causality. Is it that Uber and Lyft have caused people to drive less? Or is it that the type of person who uses ride-hailing services is less likely to drive in the first place?

“It's a good question,” Coriell said. “I'm not a data scientist so I'm just looking at the studies we do have."

Henao designed his survey and analysis to establish causality. And both he and Coriell agree that more study is needed, but that'll be difficult unless Uber and Lyft give more data to researchers. Lyft said it's protecting passenger privacy by not sharing data. Uber did not respond to an interview request.

Crissy Fanganello, the director of transportation at the city of Denver, said despite some of the negative implications in Henao’s research, she’s excited by how Uber and Lyft are expanding how people think about getting around.

“They are not saying 'I've gotta have my car and I'm going to drive myself everywhere.' They're interested and willing to take a different mode. That alone is really, really helpful,” she said.

The key measure for success, in Henao’s view, is whether or not people give up their own cars for good —but he's keeping his own car, for now. With two kids, and his commute from one suburb to another, life is just too tough without it.