Jenny Cavnar was surrounded by boys and sports growing up in Aurora. Her dad was a high school baseball coach, and when she would watch Monday Night Football with him, she paid close attention to sideline reporter Melissa Stark. That’s when Cavnar realized that’s what she wanted to do with the rest of her life.

Now, Cavnar, 35, a Colorado State University graduate, hosts the Rockies pregame on AT&T Sportsnet. On top of that, Cavnar became the first woman since 1996 to do play-by-play for a Major League Baseball game. She joined that small group of women broadcasters when she led the telecast for an April 23 tilt between the Rockies and the San Diego Padres.

As a Colorado native, what was it like to call a game for the team you grew up with?

It really does kind of give me chills to think about my job in general, getting to work in my hometown with a team I grew up with and grew up rooting for. I think about being 10 when the Rockies (became a baseball franchise), and my dad spilt some season tickets with some buddies… By the time they started playing at Coors Field, our seats were up the first base line, (watching players like) Andres Galarraga and then Todd Helton. I mean, you start to think about those names and those memories, and little did I know that one day I would be moving up a few levels to the broadcast booth to call a game. 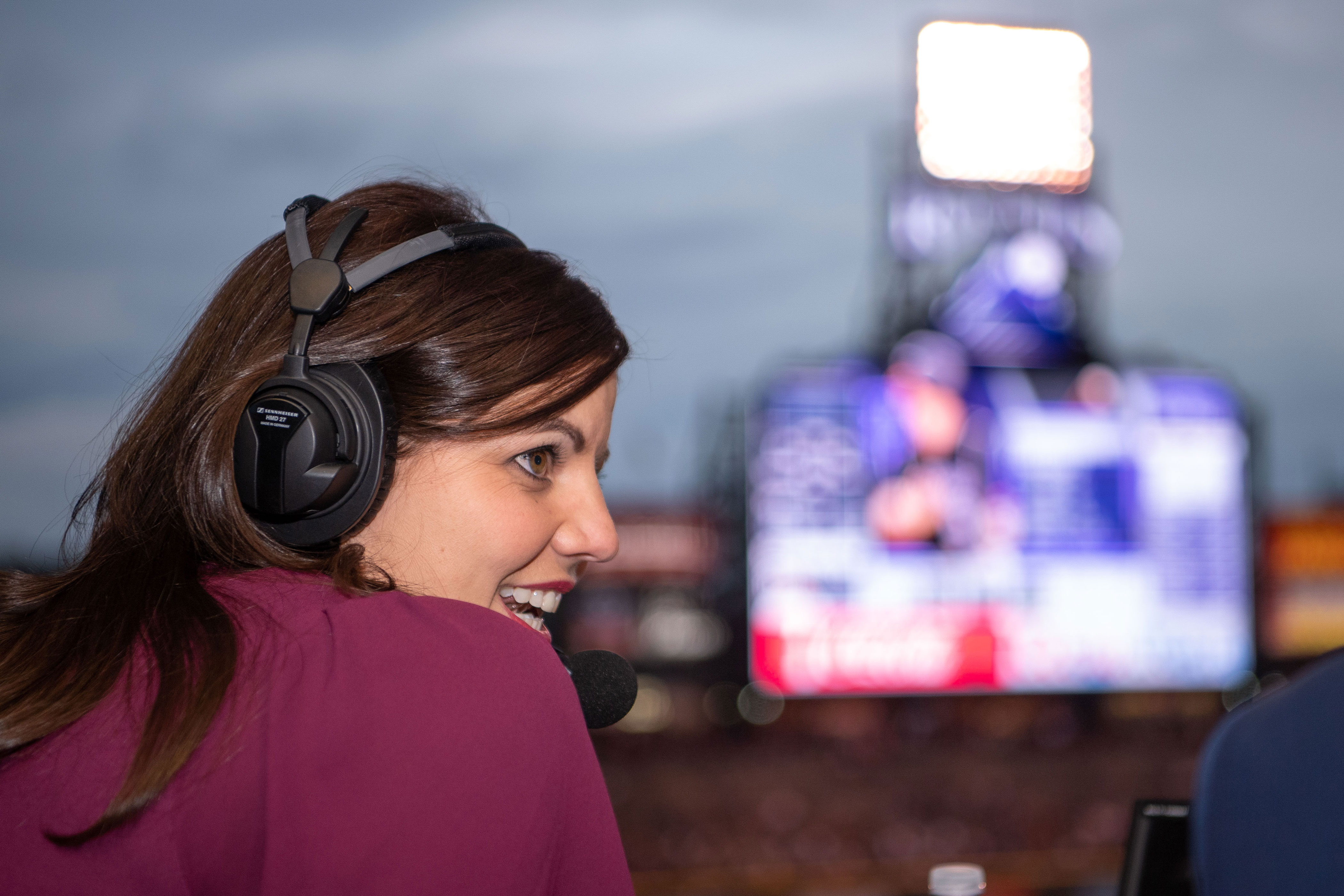 You only had one day’s notice before you called your first game, how did you prepare?

My husband, who was a professional baseball player, said I’m just going to play ‘MLB: The Show,’ the video game. We’ll turn the sound down so you can call a game. And we have a newborn at home, so I’m playing with the baby and I’m calling the game. At one point, we started cracking up and saying, ‘This is fun!’ And that was my reminder that baseball is fun. And if I don’t have fun doing it, it’s not going to be authentic. And it might not be traditional the way I do it, but I’m gonna do it the way I know how.

Do you think most people appreciate the historical significance of the play-by-play broadcast?

I hear a lot from women in their fifties and sixties who say, ‘Wow, you have my dream job that I didn’t even know was out there,’ because when they were growing up, it wasn’t something you would see. I look back at the women who had to fight to get into the locker room back in the ‘60s and ‘70s to cover a beat for a newspaper, or the women who first appeared on television, who may have been viewed as a ‘sideshow’ because they were Miss America and they thought that’s what a man’s audience would want… But now there are a lot of women watching sports and a lot of women that love sports. So I feel like they appreciate and enjoy seeing themselves represented in that broadcast on some level.

What a crazy 24 hours! I am so appreciative and grateful for all that have reached out after I got the chance to do play by play for the #rockies and #padres on Monday night! Thank you for the support and love. #FireUpTheFountains @ATTSportsNetRM @rockies

You experienced some of the worst of what Twitter has to offer, from people who did not like the idea of a woman doing play-by-play. How did you handle that?

I’m OK if people don’t like what they hear or what they see because we’re a form of entertainment. And not everybody is going to like your personality, and not everyone is going to like how you do your job. The problem I have is when it becomes an issue of, ‘I hate you. You’re a woman. I hate this.’ That’s a different issue. If you look outside of sports, all across the country, we have women that are continuing to excel at great lengths in their career.  We had a woman run for the president of the United States of America. I mean it is 2018, and if people still can’t wrap their head around the idea that women are qualified to do a job and are going to get those opportunities, then that’s their problem. People are always going to have a comment about your outfit or what you’re saying, or being a woman in a man’s field, but at some point you just have to be confident in who you are and knowing you belong.