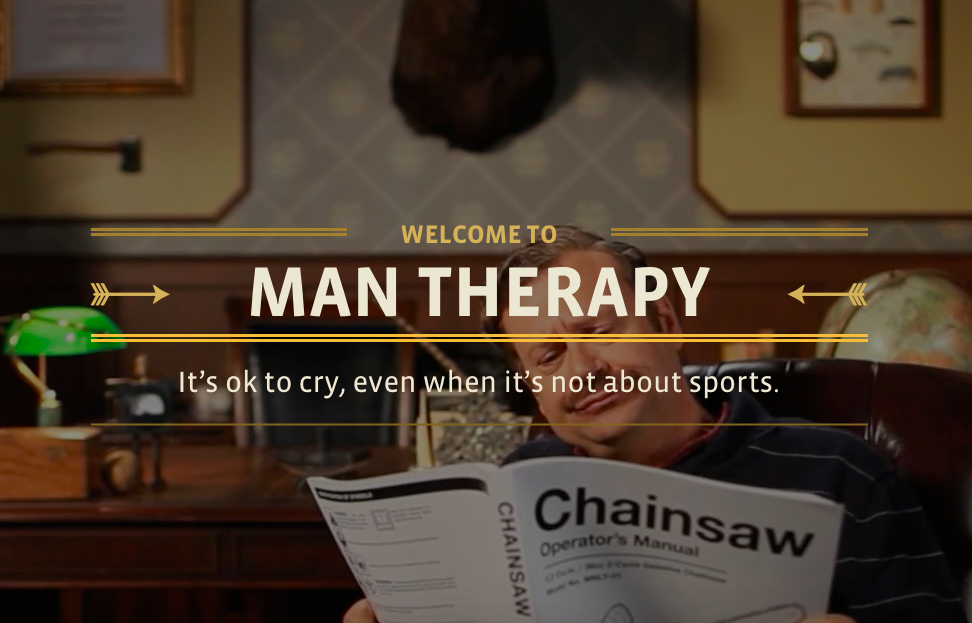 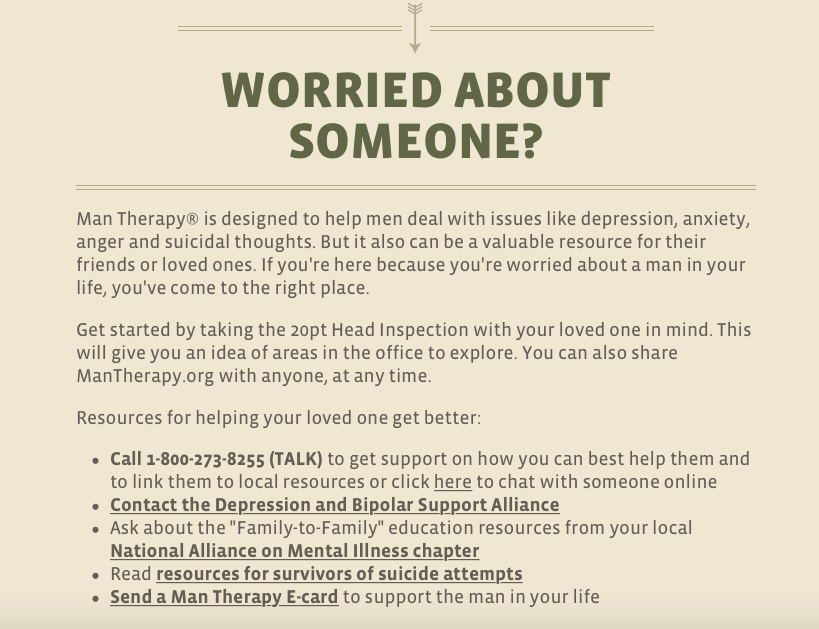 http://mantherapy.org/about A screenshot from the Man Therapy website providing resources.

A new campaign aimed at reducing the stigma surrounding men’s mental health is underway in El Paso County. The initiative is called Man Therapy and it uses humor to cut through what experts say is a tendency among men to avoid seeking help.

An online video from the campaign features a fictional, mustachioed therapist named Dr. Rich Mahogany. He sits in an office with a dartboard, a moose head on the wall, trophies on a bookshelf--so-called manly things. He acts more like a football coach than a therapist, encouraging those watching to "take a knee and get comfortable."

The approach, while not for everyone, was chosen very intentionally, according to Jarrod Hindman with the Colorado Department of Public Health and Environment (CDPHE).

"Obviously there are many men who seek out traditional mental health services,” he said. “Man Therapy is built for those guys who, if you offered to pay them to go see a therapist, they would not go.”

Last year there were 1,175 deaths by suicide in Colorado, the highest rate of suicide recorded in the state. Data from CDPHE show men are four times more likely to die by suicide. Men of working age--25 to 64--are most at risk.

"We are targeting those guys who really embrace traditional definitions of manhood that say if you’re struggling with something or you’re hurting, pull yourself up by your bootstraps, problem solve on your own, and fix it without asking for help," Hindan explained.

The Man Therapy campaign focuses on the most common stressors found to happen in connection with a suicide, said Dr. Leon Kelly with the El Paso County Coronor's office. Those can include the end of a relationship, financial struggles, and personal health crises.

"One of the things that the Man Therapy campaign does is identifies those groups and says if you’re a man and you’re struggling, or you have a man in your life or a brother, a neighbor, a friend, a buddy that you see going through these big things, this is a chance to reach out," Kelly explained.

Kelly said that in El Paso County, 163 residents died by suicide in 2017. Men accounted for 75 percent of those deaths. Of the youth who took their own lives last year in the county, Kelly said 80 percent were male.

A $100,000 grant from the Colorado Department of Human Services is funding the campaign. Susan Wheelan, interim public health director for El Paso County, said the money will also be used to pair qualified personnel who can accompany the sheriff’s office on calls related to mental health. Some of the motivation behind the campaign and the co-responder model is to reduce the jail population, she said.

“The majority of the population in the jail have some mental health needs, so [we want to see] how we can more efficiently manage their needs, rather than putting them in jail,” Wheelan explained. “It’s about getting the person the care they need at the right time and in the right place.”

Reports show there are more than 1,100 calls each year requesting a welfare check of a suicidal person in El Paso County. Wheelan said the Sheriff’s Office has received and responded to an increasing number of those calls over the past few years. From 2014 to 2016, there was a 24 percent increase calls asking for a mental-health related welfare check. In the same time period, attempted suicide calls increased nearly 15 percent.

The county is planning to get the word out about the Man Therapy campaign using digital and print media, as well as on the radio. There will also be billboards as well as sponsorship at local sporting events. The Man Therapy campaign will run until September 2019. The co-responder program partnering the El Paso County Sheriff's Office with mental health personnel will continue for five years.

If you or someone you know is experiencing a mental health crisis, call the Suicide Prevention Lifeline at 1-800-273-TALK/8255.