Pueblo officials unveiled the design for a pair of 45-foot public art sculptures Friday. The monumental "Gateway to the Southwest" structures will flank the Dillon Drive bridge going over the interstate north of the city, installed in the center of the east and west roundabouts.

"Pueblo is culture, history [and] arts,” Zwick said. “This will really give people a signal that, hey, there's something here. Pueblo is a destination place."

He ticked off cultural attractions like the Riverwalk, Pueblo Chili Fest and the Sangre Cristo Arts Center. 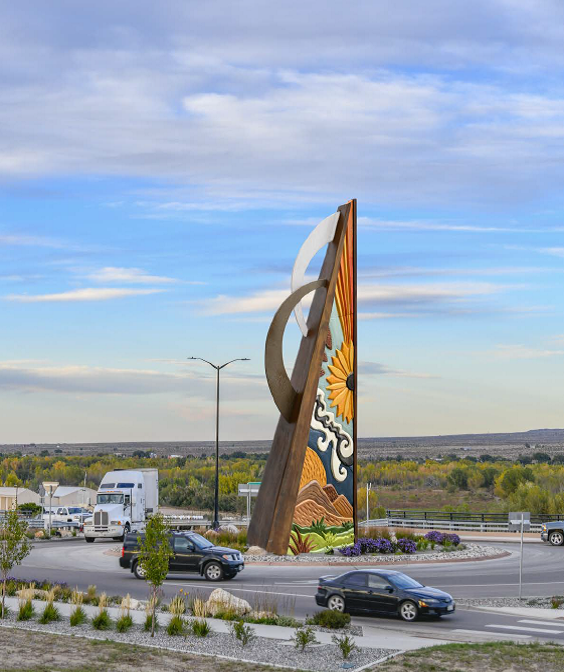 “We have a lot of culture and that we want to brag about that," Zwick said.

The colorful spires of steel and glazed ceramic tiles are designed by Pueblo-based Ken Williams Studio. In its artist’s statement, the studio described the artwork as, “creating a portal through which travelers will pass. The sculpture reinforces and defines the idea that Pueblo has historically been recognized as the crossroads to the great Southwest.”

While the city has no official public art policy written into its ordinances, Zwick said city council often voluntarily sets aside one percent of capital improvement projects for public art—in the same fashion as the percent-for-art policies cities like Denver and Boulder have adapted. That amounted to $130,000 of bridge construction costs designated for “Gateway to the South.”

On Friday, the city announced an additional $300,000 donation from southern Colorado's Robert Hoag Rawlings Foundation. In total, the project will cost $800,000, which includes $200,000 to support a new Art Maintenance Fund.

“The maintenance and upkeep of public art in the past has fallen short of expectation of the community,” a press release announcing the sculpture said. The new fund would help with issues such as graffiti removal, repairs and cleaning.

Zwick said investing in the city’s public art collection, and more broadly in its cultural identity, would drive tourism to the region.

Artist Ken Williams, who worked on the sculptures with his wife, Judith, and one of his daughters, Gwen, said it’s hard to appreciate the details in the imagery while driving along the highway, “but the form and the scale I think will attract people to exit there.”

The city expects to begin installation of “Gateway to the Southwest” summer 2019 and complete it in March of 2020.