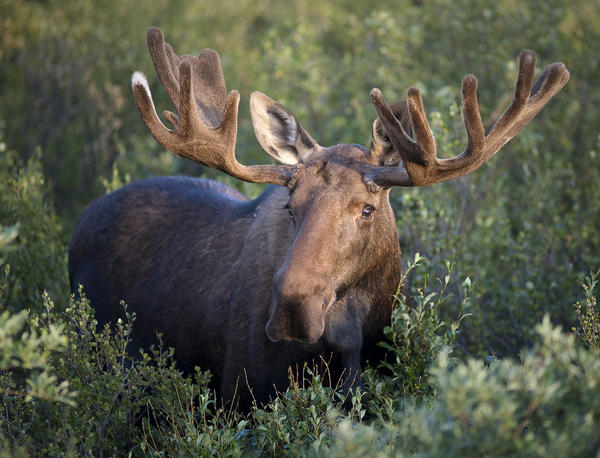 In wide open spaces like the rural parts of the Mountain West, there's sometimes little known about the secret lives of plants and animals. There are too many square miles and too few scientists. That's where citizen scientists can come to the rescue.

If you've ever looked around where you live and made some kind of observation about the natural world, then you're well on your way to becoming a citizen scientist.

"Citizen science is when scientists enlist volunteers to help conduct scientific research," said Zoë Nelson. She's the project coordinator for the Berry Biodiversity Institute on the University of Wyoming's campus. The institute runs citizen science projects all over the state.

"Scientists ask a question, design a protocol and then we work with them to help recruit volunteers, or retain volunteers, and answer that question through collecting field data," said Nelson.

This brings us to Moose Day. The Wyoming Game and Fish Department has a job for some citizen scientists, it wants to know more about the animal moose in the Snowy Mountain range in southeastern Wyoming. But before volunteers are sent out into the field, they need to know what to look for. Alex May is zoology and physiology graduate student at the University of Wyoming and gave the training this year. For starters, it included where to look.

"In this area, they're [moose] really closely tied to river corridors and aspens stands," said May. "So, if you're going up in the mountains, trying to stay near streams or rivers is a really good first step."

And if a citizen scientist spots a moose on their route, May said there are particular data points they're supposed to collect like, "where they see the moose, what the sex is, so is it male or female, approximate age, and then whether there's a calf or two even, with the female."

The bulk of the training is being able to get an idea for those things just by looking at the moose. For example, adult females will have a white blaze mark on their rump and males will have antlers or exposed bone of the skull, depending on the time of year. May said it's also important to look for signs of things that may be hurting the moose population.

"The arterial worm and the winter tick are two parasites that moose can have that you can sometimes see evidence of," he said. That includes ears that look as if they've been snipped off on top, or big patches of bare skin and hair that has turned white.

If a citizen scientist doesn't see any moose on Moose Day, that's just as important. Zoë Nelson says no data is still data.

"Zero is a number in science," she explained. "And I think that's a really cool statement to hopefully draw deeper connections into the scientific process."

Zero is a number citizen scientists, Ken Zajac, and his hiking buddy, Bob Kubichek, are familiar with. I joined up with them for their ninth Moose Day.

"Did you mention to Maggie that we've been doing this for however many years and we've never seen a moose yet?" Kubichek asked Zajac, as we drove to Vedauwoo, an area of rocky outcrops within the Medicine Bow-Routt National Forest. It's about 20 miles outside of Laramie.

Soon after we hit a gravel road, we came to a seasonal closure where we parked the truck and began walking the five-mile route. The hike had been pre-determined by the Wyoming Game and Fish Department. It selects about 30 different routes in southeastern Wyoming twice a year for Moose Day. Then volunteers sign up for the route of their choosing to hike on a date that is also predetermined.

Kubichek said they got involved with Moose Day back when it started in 2015.

"That was the first I'd ever heard of the whole citizen science idea," he said. Ken Zajac added it's also a good excuse to get outside, "especially out here in Wyoming, we've got some of the last good stuff left."

About two miles in, we made it to a part of the route that was surrounded by willows. Kubichek said that's prime moose habitat since it's "a pretty deluxe place to eat, you know, a buffet."

Soon we came around a bend and stopped right in our tracks. We stayed as quiet as we could because just to the left of the trail, about 30 yards away, we spotted a moose. It was pretty big and it didn't have a white patch on its rump, so we guessed that it was an adult male. We stood there for a while, the moose looking at us, us looking at him. Then it disappeared back into the trees. Kubichek and Zajac had finally seen what they'd been looking for all these Moose Days.