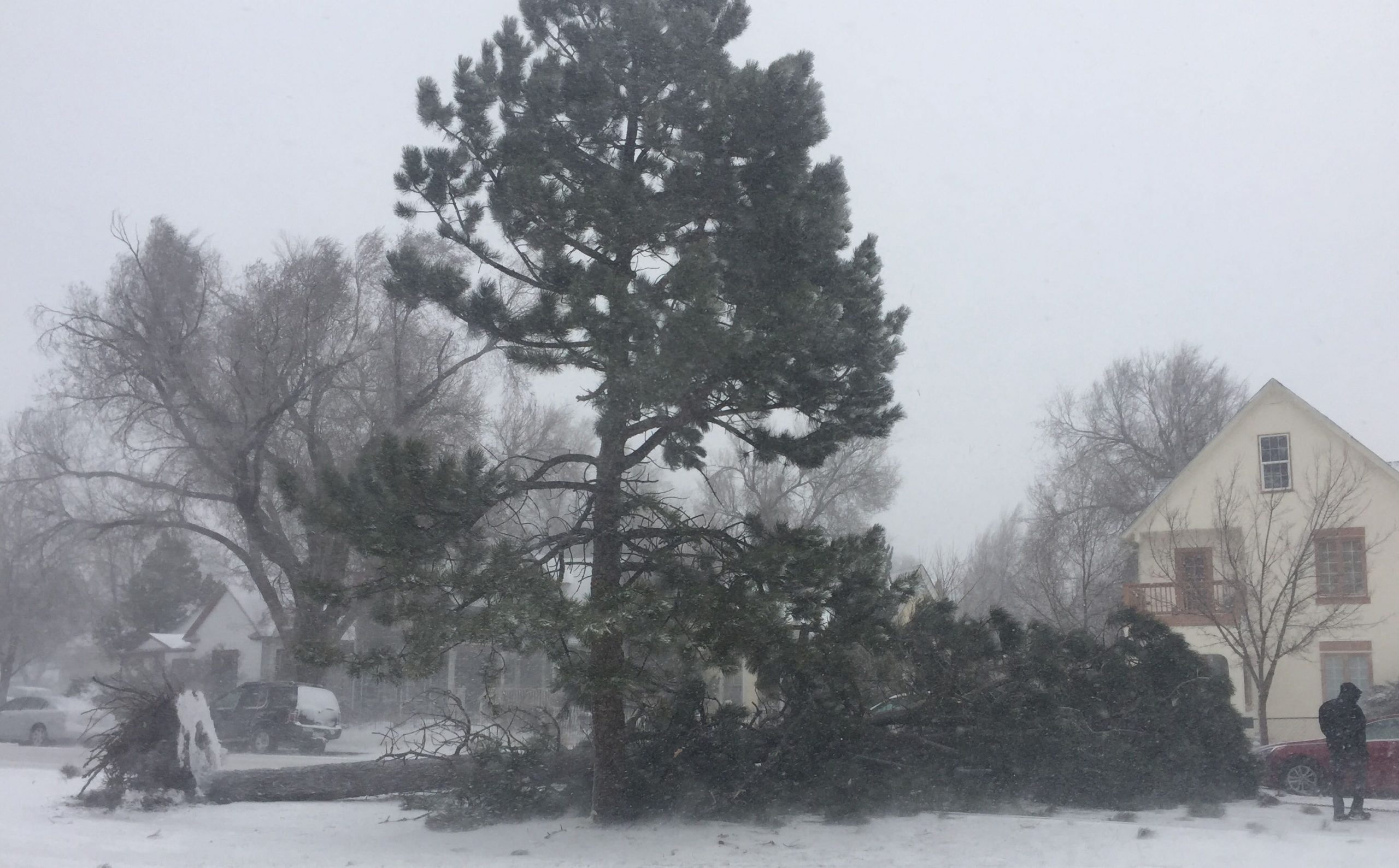 Ali Budner / 91.5 KRCC A giant tree fell across the road around 2 p.m. on Wahsatch Avenue in downtown Colorado Springs. 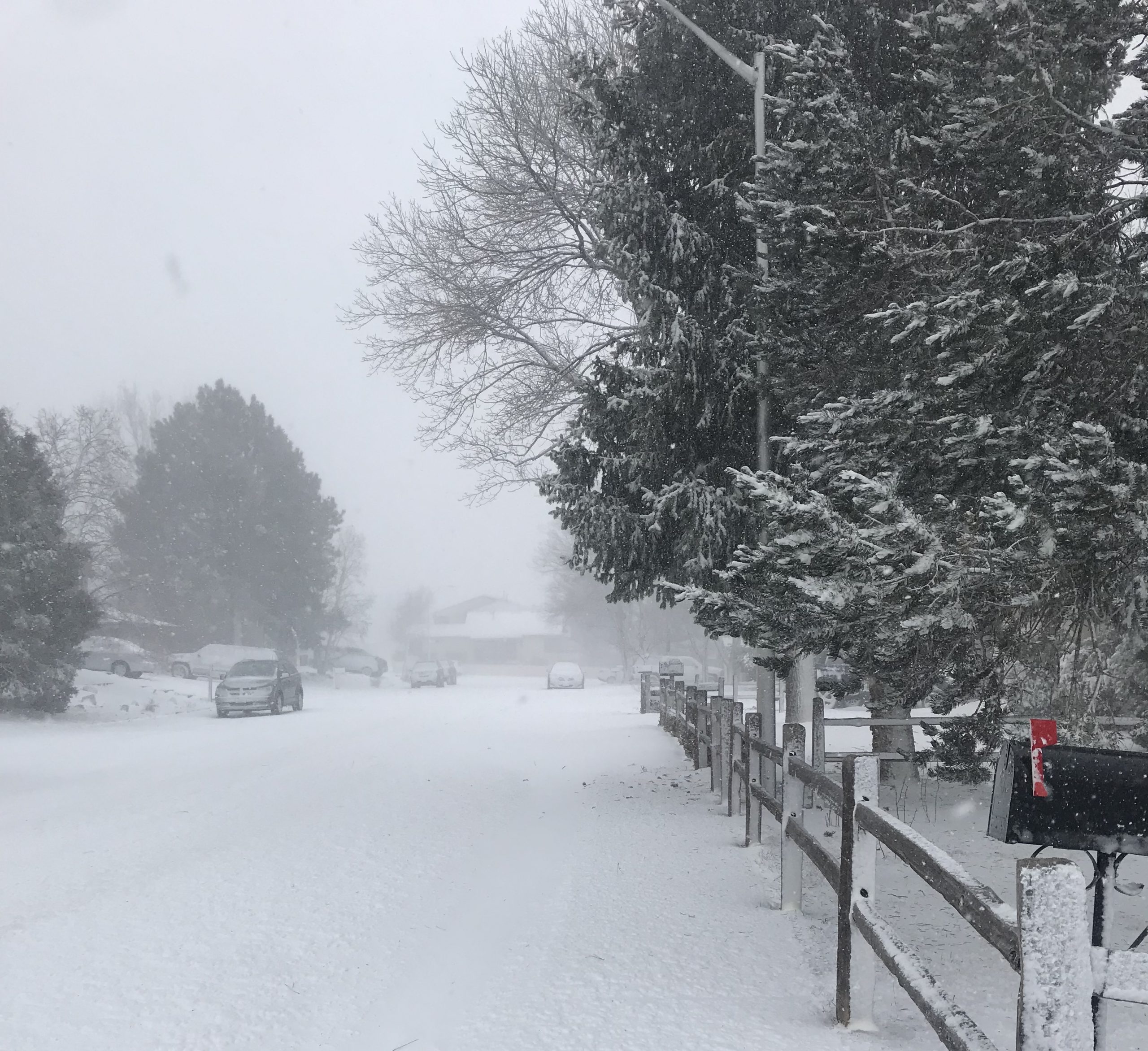 Abigail Beckman / 91.5 KRCC Snow blanketed a residential street on the east side of Colorado Springs by mid-afternoon. Strong winds along with heavy snow led to stranded motorists and road closures across the city.

UPDATE Thursday, 3/14/19, 6:10 a.m.: Many roads throughout Colorado remain closed after yesterday's severe winter weather, including northbound Interstate 25 at Woodman. Officials are still encouraging residents to stay home, and, if they must go out, to check routes. You can also check the latest closures here.

In Weld County, Colorado State Patrol Corporal Daniel Groves was killed Wednesday morning as he was attending to a vehicle that slid off the roadway. Groves was transported to a medical center after a car lost control and struck him and declared dead shortly after.

"It is a tragic reminder that people’s lives are at stake," said Colorado Department of Transportation director Shoshana Lew, "particularly those who are there to keep us safe are in vulnerable situations, working tirelessly to protect the safety of the traveling public. Safety is a team effort."

As of last evening, CDOT reported no other fatalities. The National Weather Service in Pueblo says strong wind gusts will persist over the far eastern plains this morning. Yesterday's wind gusts reached 97 miles per hour in Colorado Springs, 89 in La Junta, and 78 in Pueblo.

UPDATE: 7:34 p.m.: State transportation officials expect many roads in Colorado to remain closed throughout the night, including Interstate 25 through the Palmer Divide, and are encouraging drivers to stay home. Governor Jared Polis has activated the Colorado National Guard to assist in search and rescue operations, focusing primarily on stranded motorists.

Polis has also verbally declared an emergency and has ordered flags be lowered to half staff in honor of Colorado State Patrol Corporal Daniel Groves, who was killed in Weld County today while assisting a driver in need. Groves, 52, was struck by a car that had lost control in poor driving conditions. There are no more reported fatalities.

El Paso County officials say more than 1,100 motorists are stranded throughout the county as blizzard conditions continue to move through the region. They are urging people to stay off the roads.

The National Weather Service has extended the blizzard warning until midnight as a major winter storm blows through Colorado causing power outages, canceling flights and closing roads. A blizzard warning is in effect for much of northern and eastern Colorado.

El Paso County Commissioner Mark Waller has signed an emergency declaration, which means the county can now request assistance from state and local governments. The county says those resources will be used to rescue the stranded motorists, and that Lake County assistance is already en route.

On Tuesday, many school districts pre-emptively canceled classes for Wednesday and many government offices closed in anticipation of the storm. The latest information on closures is here.

Colorado Springs Utilities is reporting storm-related outages and downed wires in the city, and the National Weather Service reported wind gusts of 97 mph at the Colorado Springs Airport.

Here's an updated look at our online outage map. As you can see, we're working several issues across the city & the wind is not our friend right now.Don't forget these storm safety tips for today & even tomorrow.https://t.co/8AAD8dlgc1 pic.twitter.com/4Fhpbwgw7s

The Colorado Department of Transportation has closed I-70 and major roads in the eastern plains, as well as I-25 from Ridgegate to Monument, among other routes.

As of just after 4:55, the Colorado Springs Airport reported all inbound and outbound flights have been canceled and that travelers should contact their airlines for more information.