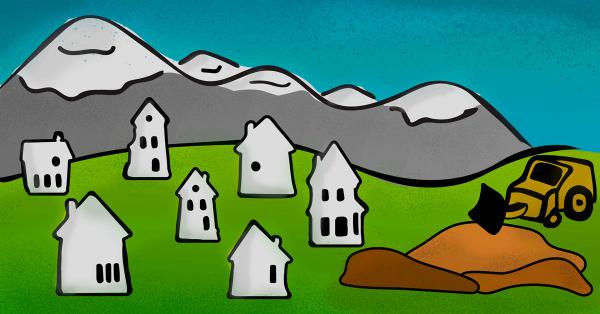 But the valley’s days as a bucolic farmland may be numbered. Over the past decade, it has become a maze of subdivisions and massive homes, all built to house a growing number of wealthy retirees and stock market investors who have flocked here for its pastoral setting and its proximity to Utah’s world-class ski areas.

In 2015 retirees Sue and Rick Nathanson moved to Heber Valley, in part, to get closer to Deer Valley Resort.

“Best groomed skiing in all of America,” Sue said. “We came down here and [Rick] had never skied it. We bought a house anyways.”

They now own a house in the luxury subdivision of Red Ledges in Heber City. It is the Nathanson’s second home — their other is in Palm Springs, California.

Ever since the end of the last recession, wealthier Americans such as the Nathansons have been moving to small, recreation-focused communities across the West, according to a recent report from the nonprofit organization Headwaters Economics. The influx of new money is transforming once-sleepy logging or ranching towns in ways that are both good and bad — revitalizing communities but driving housing costs beyond what’s affordable for many residents.

“Who is benefiting from these booms in recreation communities?” asked Megan Lawson, an economist at Headwaters and author of the study. “Who is not?”

“These are places that are struggling to hold onto residents,” Lawson said. “They’re dealing with population loss and people moving away.”

The report found that since the Great Recession rural and semi-rural Western counties with a lot of recreation opportunities — hiking, biking, snowmobiling and skiing — have grown while rural counties without those amenities continue to shrink.

The transplants who are moving to these recreation meccas are often wealthier than those moving to counties without those opportunities.

“This validates outdoor recreation as an economic development strategy that can bring decent jobs,” Lawson said. “It can bring new residents to the community — not just tourists.”

The transformation is visible in Heber Valley, where new bakeries and restaurants are popping up and Wasatch County’s first microbrewery is planning to open this summer. But for Heber Valley and some other recreation paradises in the West, all this growth comes at a cost.

Heber City Police Chief Dave Booth has lived in the valley for two decades and has witnessed its recent transformation.

From his office window, he can see traffic pass by on Main Street. For every rusted Honda or muddy, ranch-style pickup truck, there’s a Porsche or a Mercedes-Benz hauling mountain bikes. Booth said the influx of wealthy residents means more expensive housing.

“Rents have just skyrocketed,” he said.

According to data from Headwaters Economics, almost half of all renters in Wasatch County are paying rent that is more than 30% of their income, which is considered unaffordable. The median listing price for a home has doubled over the past decade. As of May, 2019, it hovered around $632,000, or nine times the median income of a family living in the valley.

Booth worried that wealthier transplants are pushing out Heber’s school teachers and police officers — the people who make a town a community.

“Everybody would like to have a home with a yard and a neighborhood to raise a family,” he said. “Why should it be said, ‘Hey, if you’re a cop in Heber City, you shouldn't be able to have this.’ If that day comes, then the cops are going to have to live somewhere else. I think that’s a shame.”

Retirees Sue and Rick Nathanson said they were well aware of the housing crisis unfolding in the Heber Valley. They also acknowledged that they are somewhat to blame.

“Absolutely we are part of the problem,” Sue Nathanson said.

But it’s a problem that is pushing out more than just the valley’s school teachers and police officers. The quaint dairy farms that the Nathansons fell in love with when they first moved to the Heber Valley are quickly turning into dirt construction sites after being sold off to real estate developers.

Eventually, the Nathansons said, they too will move away.