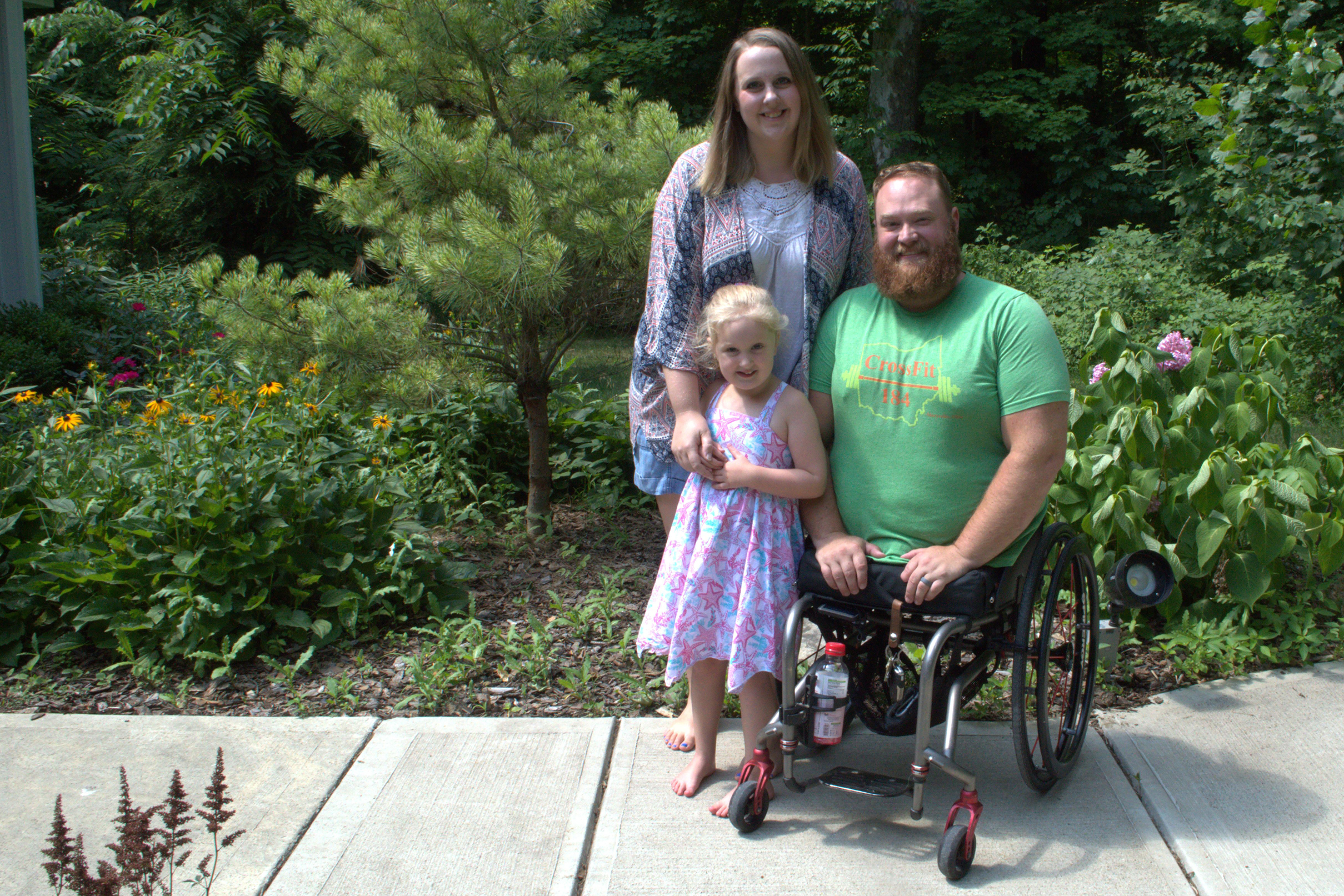 Jason Gibson, a former Army combat engineer, now spends a lot of his time at home in central Ohio, coloring and playing hide-and-seek with his 4-year-old daughter, Quinn.

But family life hasn't come easy for Jason and his wife Kara. During Jason's third deployment to the Middle East in 2012, he knelt down to investigate something in the road. That triggered an IED explosion which nearly cost him his life. He spent more than 17 days in a coma, lost both legs up to the hip, and suffered shrapnel injuries to his groin.

While Jason went through a lengthy rehabilitation, no one in the military health system talked to the Gibsons about fertility issues until about a year later.

"We were meeting with his nurse practitioner, and all of a sudden she just brought up, at one of his regular appointments, 'Hey have you guys gotten a sperm count yet?'" Kara Gibson said.

"The thought never crossed our minds," Kara said. "We just kind of assumed that everything would be okay."

It turned out Jason's sperm count was practically nil. The couple was told they had no chance of conceiving a child naturally and would need to rely on uterine insemination methods or IVF.

It was difficult news for the Gibsons, who had been planning to start a family before Jason's injury.

"We were feeling ready," Kara said. "We'd been married for a couple of years."

The Gibsons decided to pursue IVF, but they say they received little support from the military and its insurer, TRICARE.

"TRICARE would cover IUI and some of the IVF medications," Kara said. "But when it comes to the actual procedure, egg retrieval, sperm retrieval, freezing of embryos... they don't cover that."

In 2014, after Jason was medically retired from the Army, the Gibsons paid for IVF mostly out of pocket, shelling out more than $10,000. Their daughter Quinn was born nine months later.

Coverage Has Improved, But Still Uncertain

Since that time, the situation has improved somewhat for veterans who struggle to have children. In 2016, Congress authorized the Department of Veterans Affairs to cover IVF and other fertility treatments if the cause is service-related. But that can be difficult to prove, and couples must meet stringent criteria.

Since that time, the VA has provided 567 veterans and their spouses with IVF treatments.

Still, funding for the VA's IVF benefit is fragile. Congress has been approving it one year at a time, meaning coverage could lapse as soon as the end of September.

Sen. Patty Murray of Washington wants to make it permanent.

"Although we have passed a form of this bill in our yearly appropriations bills... it's caused a lot of confusion to our veterans," she said.

Murray also wants to expand who's eligible for VA fertility coverage and increase the types of treatments covered. Her bill would make IVF more available to non-traditional couples and pay for the use of donor sperm, eggs, and surrogates. It would also require the VA to cover the cost of adoption services for veterans with injury-related infertility.

But religious objections have been a roadblock to Murray's bill. Murray has introduced versions of the legislation several times in recent years, only to see them scuttled by the same personhood arguments that inform the abortion debate.

Kathleen Raviele, a gynecologist and past president of the Catholic Medical Association, said her organization supports veterans and active-duty military personnel, but it opposes IVF. The organization says IVF threatens the traditional man-woman union.

"It takes away from the couple having the child, it puts it into the laboratory, " Raviele said. "So the lab technician chooses the embryo that's implanted — or the embryos — maybe one, two or three embryos that will be implanted in the woman. The rest may be discarded. These are human lives."

She also points to options like adoption, which she considers more morally sound. Raviele argues that biological children aren't owed to parents, and she says injuries and misfortunes can befall anyone.

Sen. Murray takes issue with that.

"To them, I say, go talk to these men and women whose one dream is to have children, to have a family," Murray said. "Then ask yourself if you should impose your religious beliefs on them."

Now that the Gibsons have their family, they say they feel lucky. But they still think of other service members returning from war and hope the government moves fertility higher on its list of priorities.

"There's this old saying that goes, 'If the military would have wanted you to have a family, they would have issued you one.' And I've just kind of always felt that's how it's been," Kara said. "Things have improved. But at the time, we just kind of felt last."