Women dressed in yellow shirts and green pants, the uniform for Denver Women’s Correctional Facility inmates, filtered into the prison’s recreation center on a recent evening.

Just past the doors, actors greeted them and invited them into the world of the night's play, “One Flew Over the Cuckoo’s Nest.”

“Gather round, ladies,” said a man in a lab coat, flanked by a woman dressed as a nurse and two men in white scrubs. “You are about to enter Sterling Ward, our therapeutic community. I am Dr. Spivey, ward psychiatrist. This is our head nurse, Miss Ratched, nurse Flynn, aids William and Warren. Please follow all rules and regulations while on the ward. Remain seated, and please, try not to disturb the patients.”

While the performance of “One Flew Over the Cuckoo’s Nest" is on tour, a prison was not an unusual venue. These actors themselves are inmates of Sterling Correctional Facility, one of the highest-security men’s prisons in the state. Despite the guards posted around the room for safety, the prisoners ran the show.

It’s the first time in the U.S. a prison has taken a play on tour to other prisons.

With the direction and assistance of the University of Denver Prison Arts Initiative, inmates transformed the gym into a psychiatric ward. It’s theater in the round, so the audience sat in folding chairs within the three painted walls of the set, and the actors performed in the middle.

“One Flew Over the Cuckoo’s Nest” is a tale of institutionalized psychiatric patients and their power struggle with Nurse Ratched, a controlling woman who runs the ward with an iron fist.

If that seems a little on the nose for a play performed by men who are incarcerated, that’s on purpose.

“It’s historical; it’s dated,” said Ashley Hamilton, a DU professor who founded Prison Arts Initiative and directed the play. “There are things that are not at all accurate to the prison system today. But it also does sort of remind us of our history in the US around institutionalization and mental health, which is very much intertwined with the prison system. But it’s a meaty, rich text. And it brought a lot of good conversation, hard conversation. And there’s also just really incredible humans and characters in this play that we were excited to bring to life and tell their stories.”

The play might be dated, but the characters resonate with Brett Phillips, who is serving a 38-year sentence for second-degree murder.

“The dynamics that are going on in that room in the Cuckoo’s Nest, in the psych ward, I’ve been in prison for 10 years, and I’ve seen these behaviors," Phillips said.

Phillips plays the main character, R.P. McMurphy — the gambling, authority-bucking, new patient on the psychiatric ward who galvanizes the other patients to rebel against the authoritarian Nurse Ratched. In real life, Phillips said he’s a lot less talkative than his character. But acting on stage has helped him communicate offstage.

“We’re learning how to talk to each other, relate to each other in a way that is not prison-y, I guess you could say," he said. "Learning that anger is not the only emotion, that we can show emotion. We can show hurt and fear. And all these things and be touched by things without having to have a stigma around it. Because it’s not unmanly to cry. It’s not unmanly to cry.”

And that newfound sense of expression is forging deeper relationships between inmates, even inmates who wouldn’t traditionally get along. Phillips said he’s seen people step back their involvement in prison gangs. 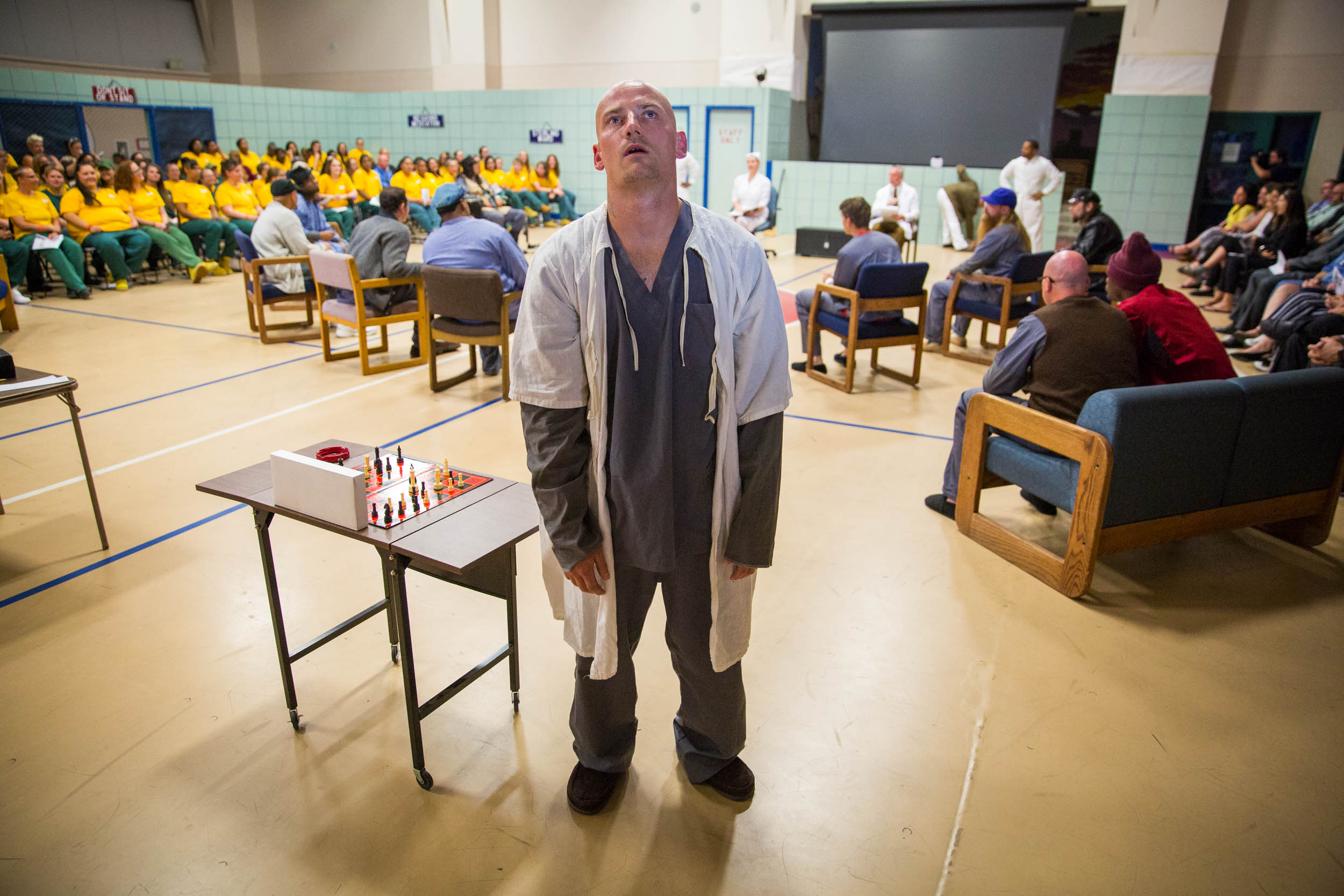 Hart Van Denburg/CPR NewsJohn T. Saindon as Ruckley in "One Flew Over The Cuckoo's Nest. 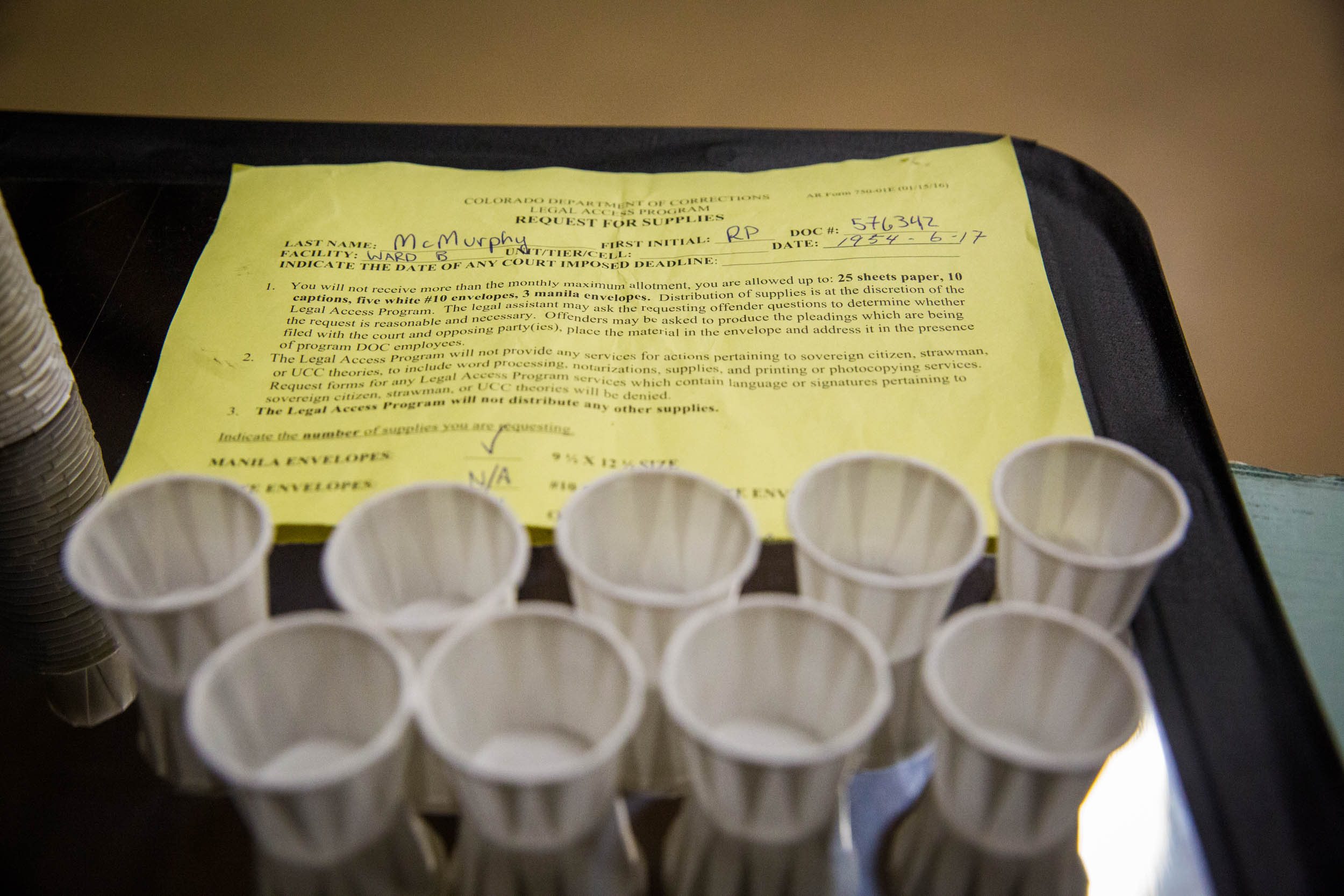 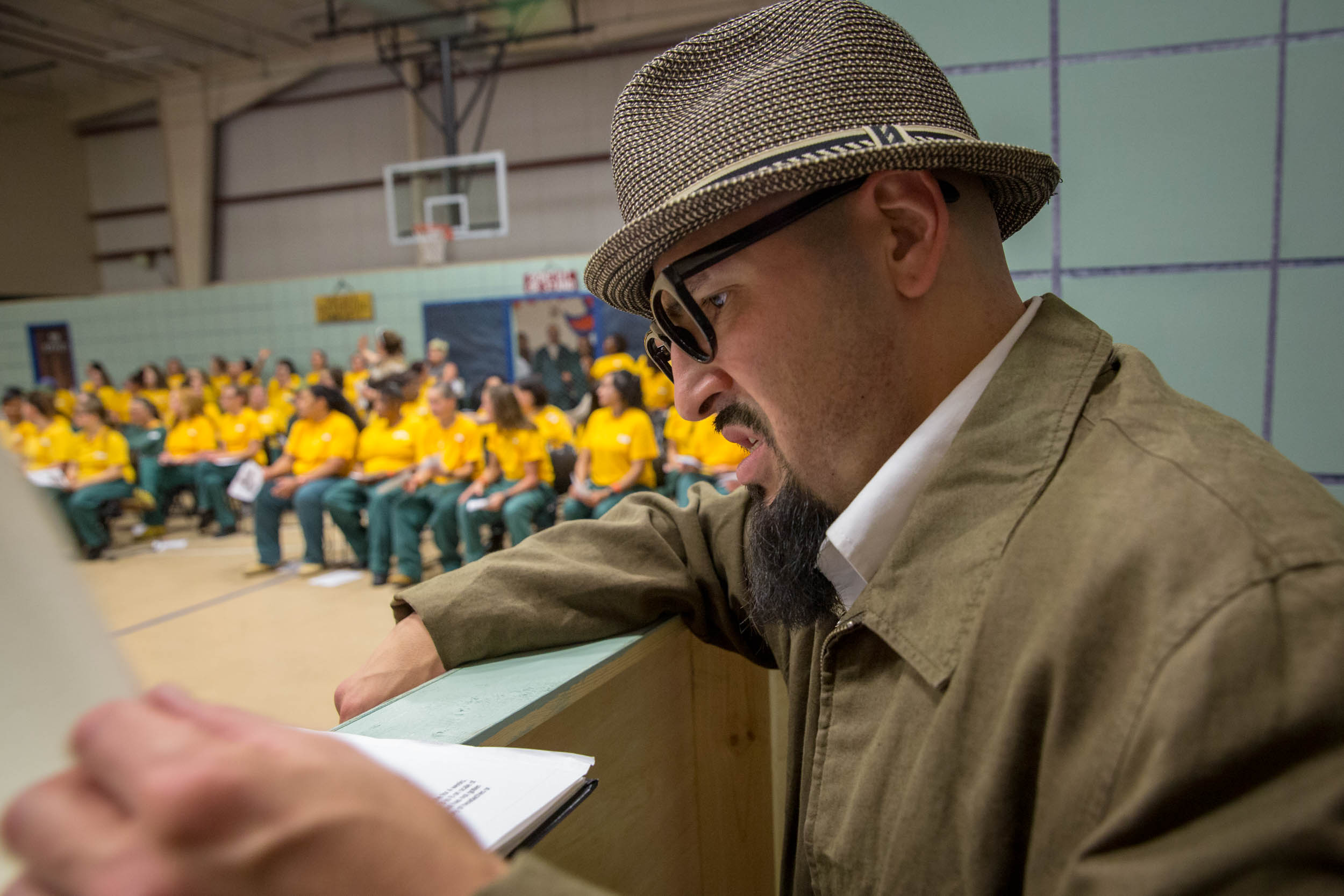 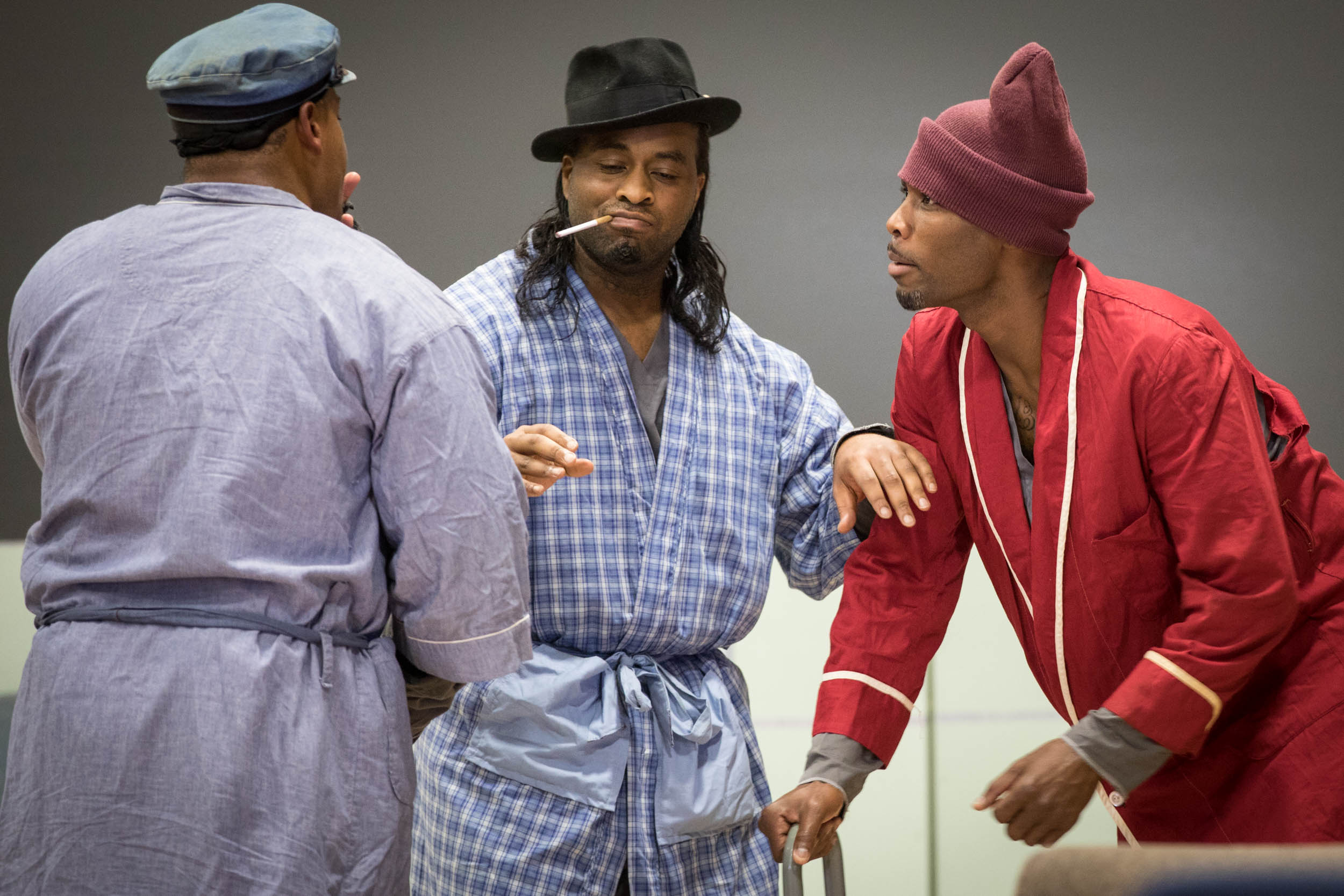 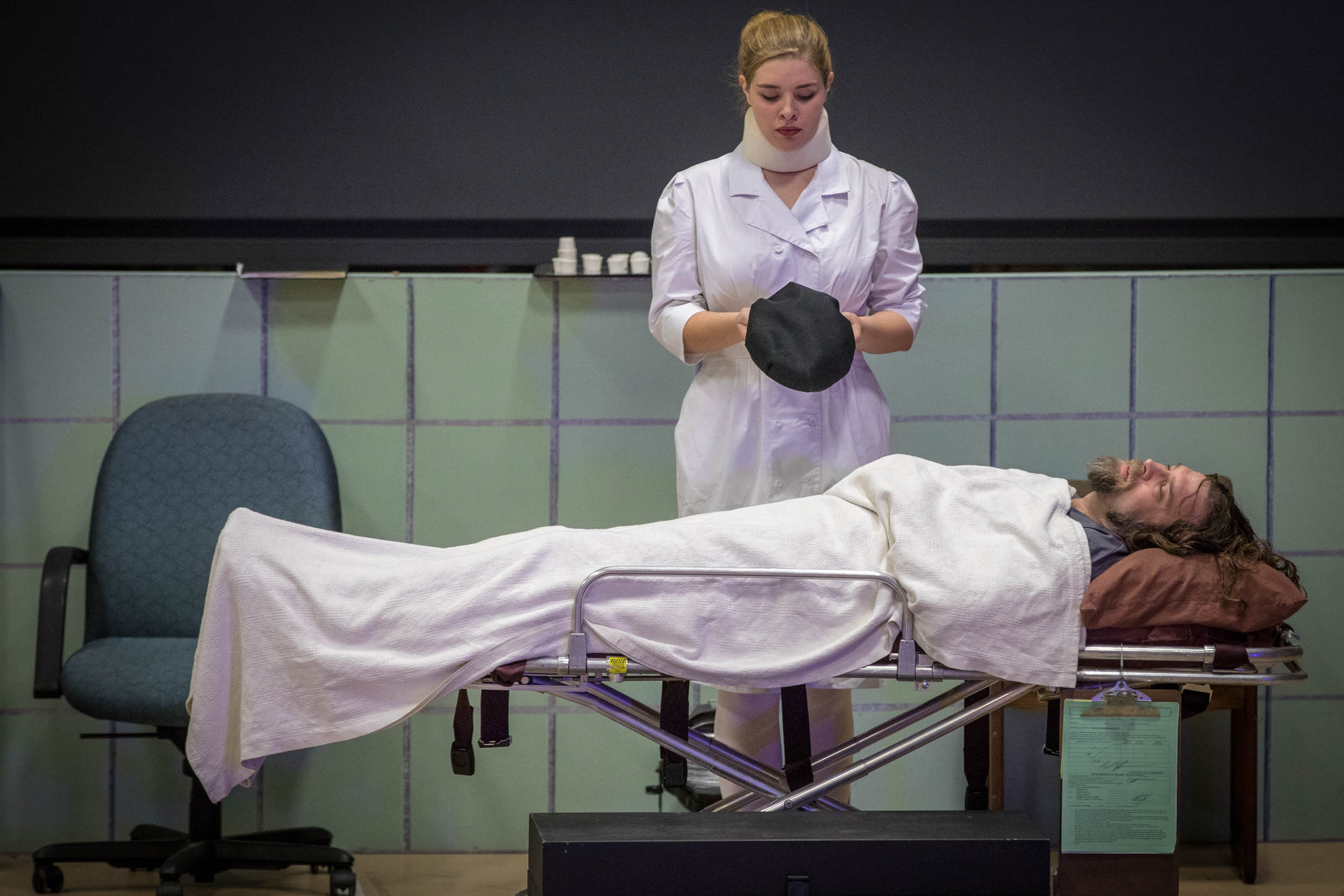 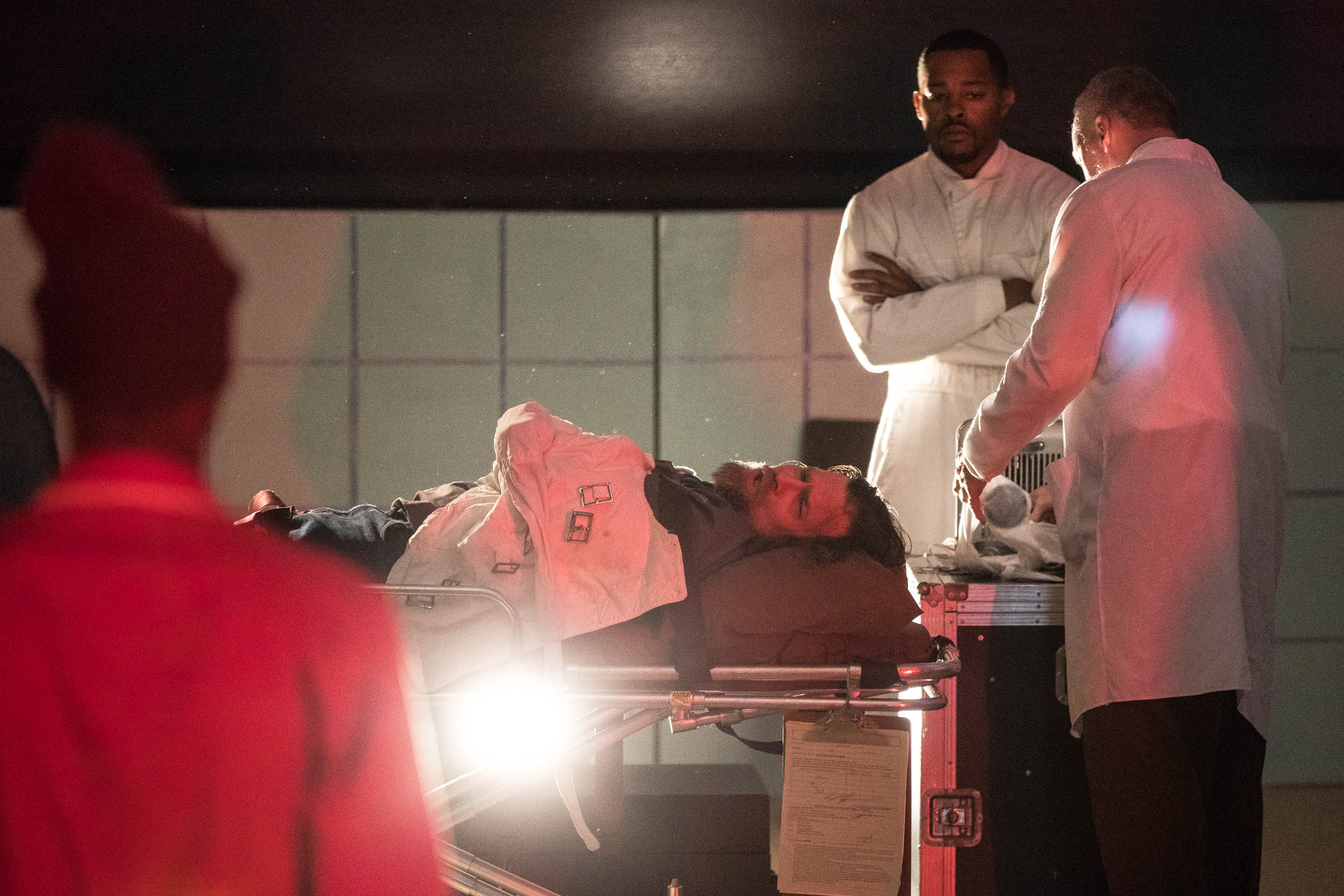 Hart Van Denburg/CPR NewsBrett Phillips plays Randle McMurphy, in straitjacket, in "One Flew Over The Cuckoo's Nest," produced by the DU Prion Arts Initiative and inmates at the Sterling Correctional Facility, performed Monday Sept. 10 2019 at the Denver Women's Correctional Facility. 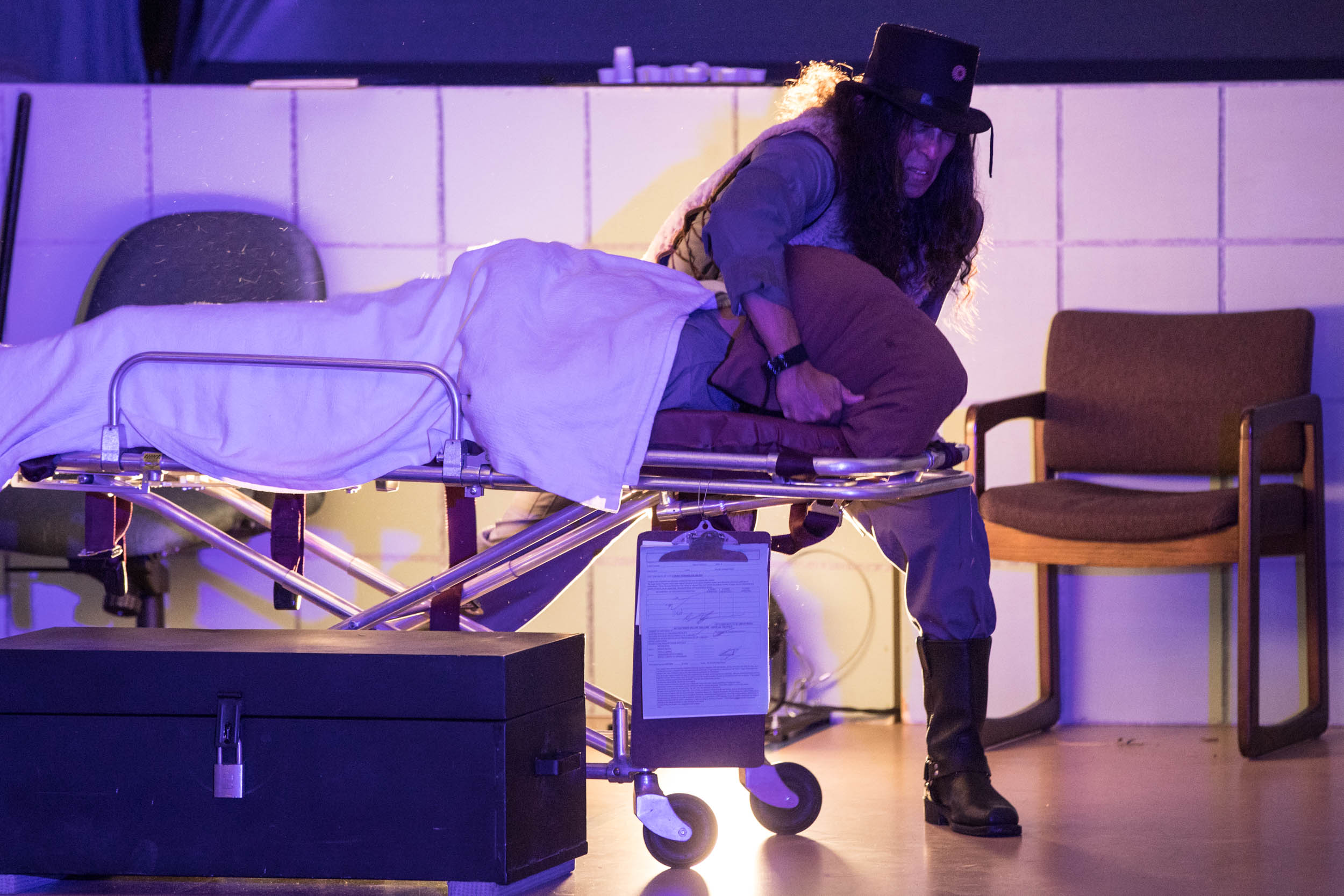 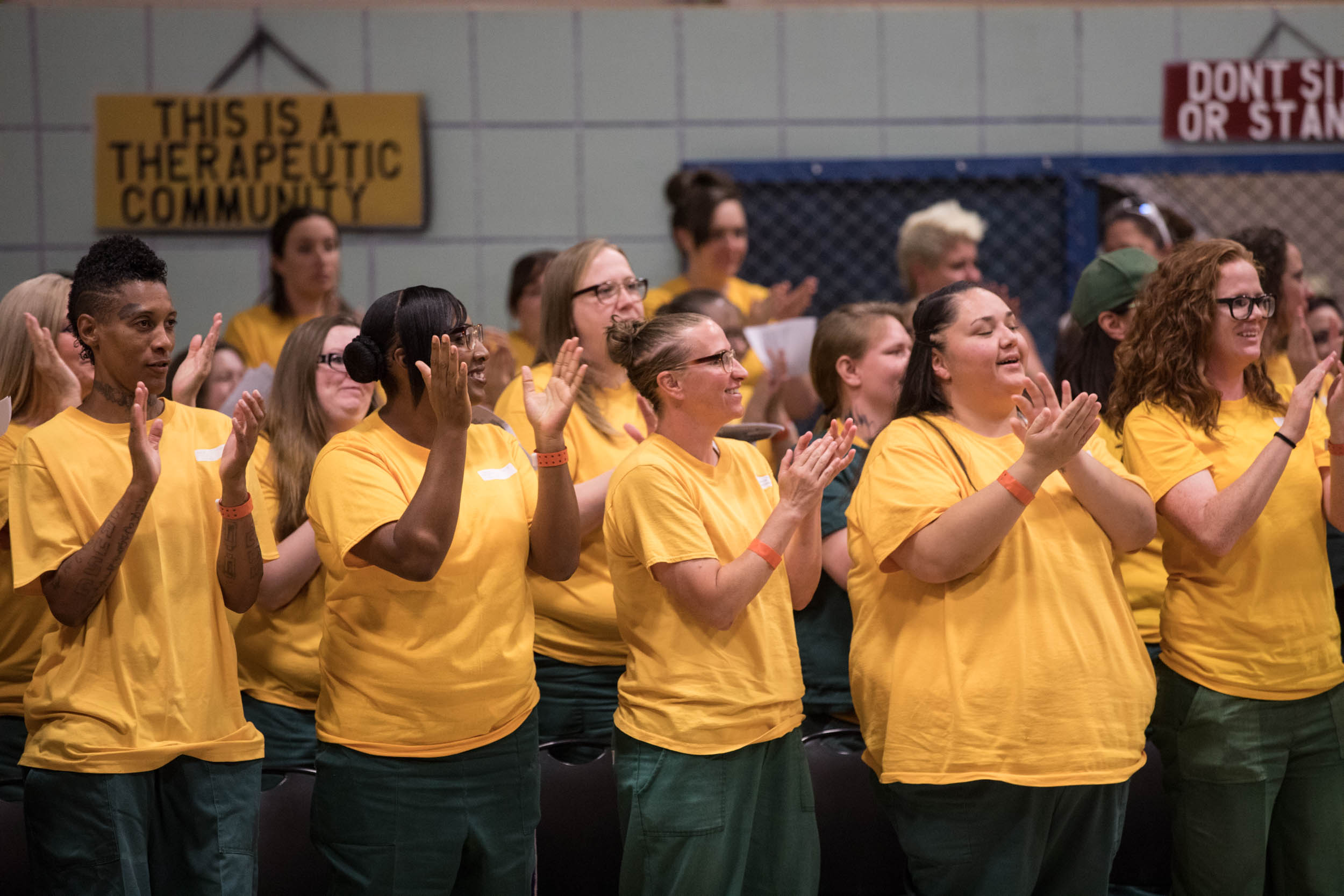 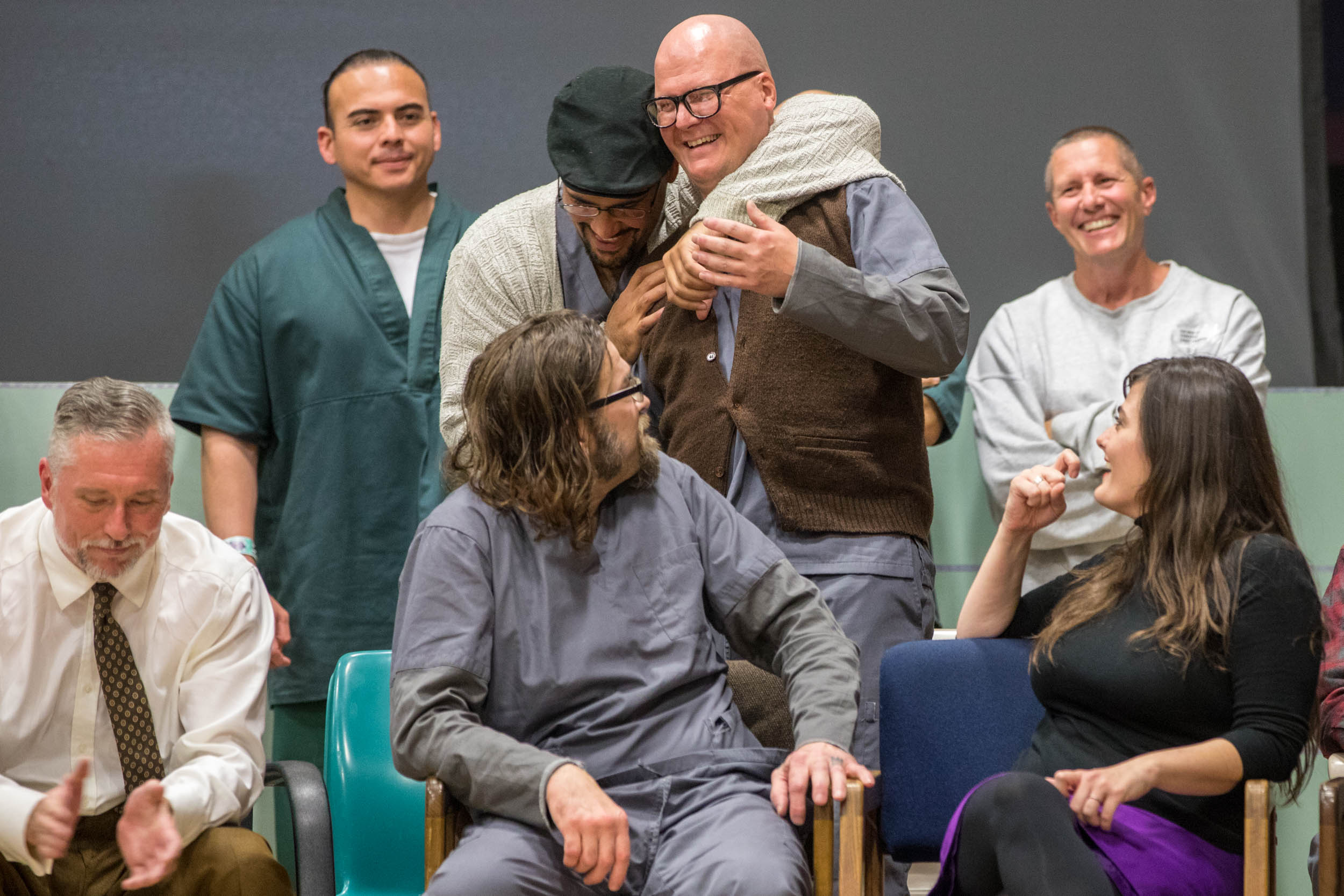 Hart Van Denburg/CPR NewsCast and crew answer audience questions after a performance of "One Flew Over The Cuckoo's Nest," produced by the DU Prison Arts Initiative and inmates at the Sterling Correctional Facility, performed Monday Sept. 10 2019 at the Denver Women's Correctional Facility. 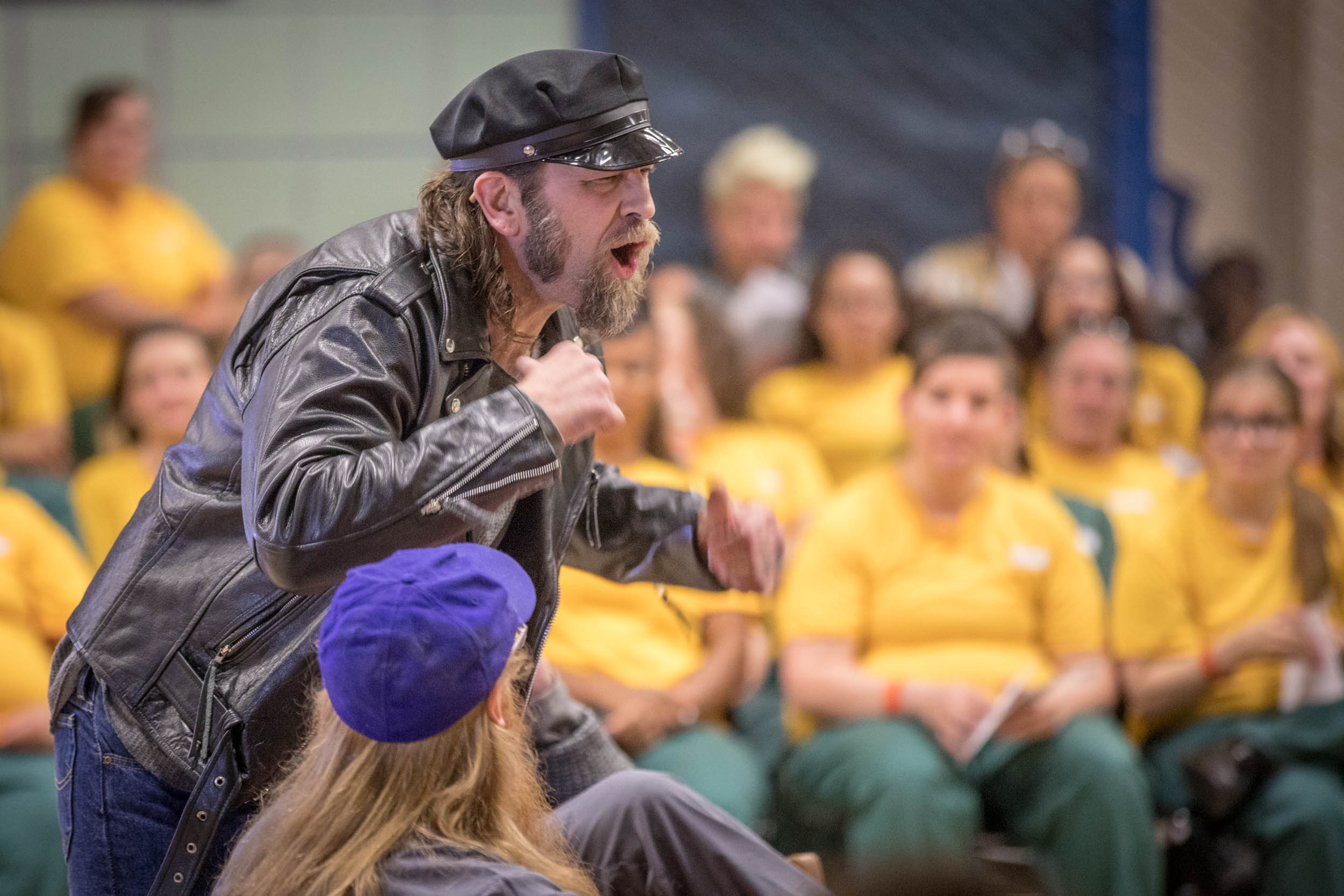 Arts programs in prisons are nothing new, but the Colorado Department of Corrections took an unprecedented step when it asked Hamilton to take the play on tour. After several performances at Sterling Correctional Facility, the cast and crew traveled to Limon and to the Denver Women’s Correctional Facility to perform for the staff and inmates of those prisons as well.

Warden Ryan Long oversees the Denver Women’s facility. He said that bringing theater performances into the prison helps humanize the situation, as does inviting interactions between prison staff, civilians and the men and women incarcerated at different facilities.

“Although it brings up hard conversations and potentially emotions that aren’t always at the surface, they’ve come in a positive way, and it spurs positive conversations, positive impacts, personal accountability,” Long said. “And those things, empathy and sympathy, that aren’t always something that’s on the forefront of your emotional toolbox when you’re incarcerated.”

An inmate at the women’s correctional facility echoed that idea of empathy after the performance, when the cast and crew took questions and comments from the audience.

“It’s amazing because it gives hope, it gives determination. It brings all these new horizons, not just for us in here but for people out there as well. And it also gives people who are in these sort of things a pathway to find out who they are," she said. "And regardless of being in prison, that’s amazing.”

Half the people released from prison in Colorado will find themselves back behind bars. That recidivism rate is well above the national average, which is 40 percent. Among the challenges people face after incarceration, one is how re-entry into society demands soft skills, such as appropriate emotional expression, compromise and determination. Long and Hamilton both see theater as a place for inmates to practice these skills.

“You know we talk a lot about this inside,” Hamilton said. “It’s not just about, like, ‘Let’s do these cool fun things. Let’s do a fun play.’ It’s not that. It’s about how can we use these different efforts to set people up to be successful to come home. Ninety-five percent of people who are currently incarcerated are going to go home. They’re going to be our neighbors. They’re going to work with us. And we want folks to come home feeling set up to be successful so that they can stay home and so that no more harm can be caused.”

A second play from the Prison Arts Initiative program is already in the works. Women from the Denver Women’s Correctional Center are preparing “A Christmas Carol.” It will be ready in time for the holidays.