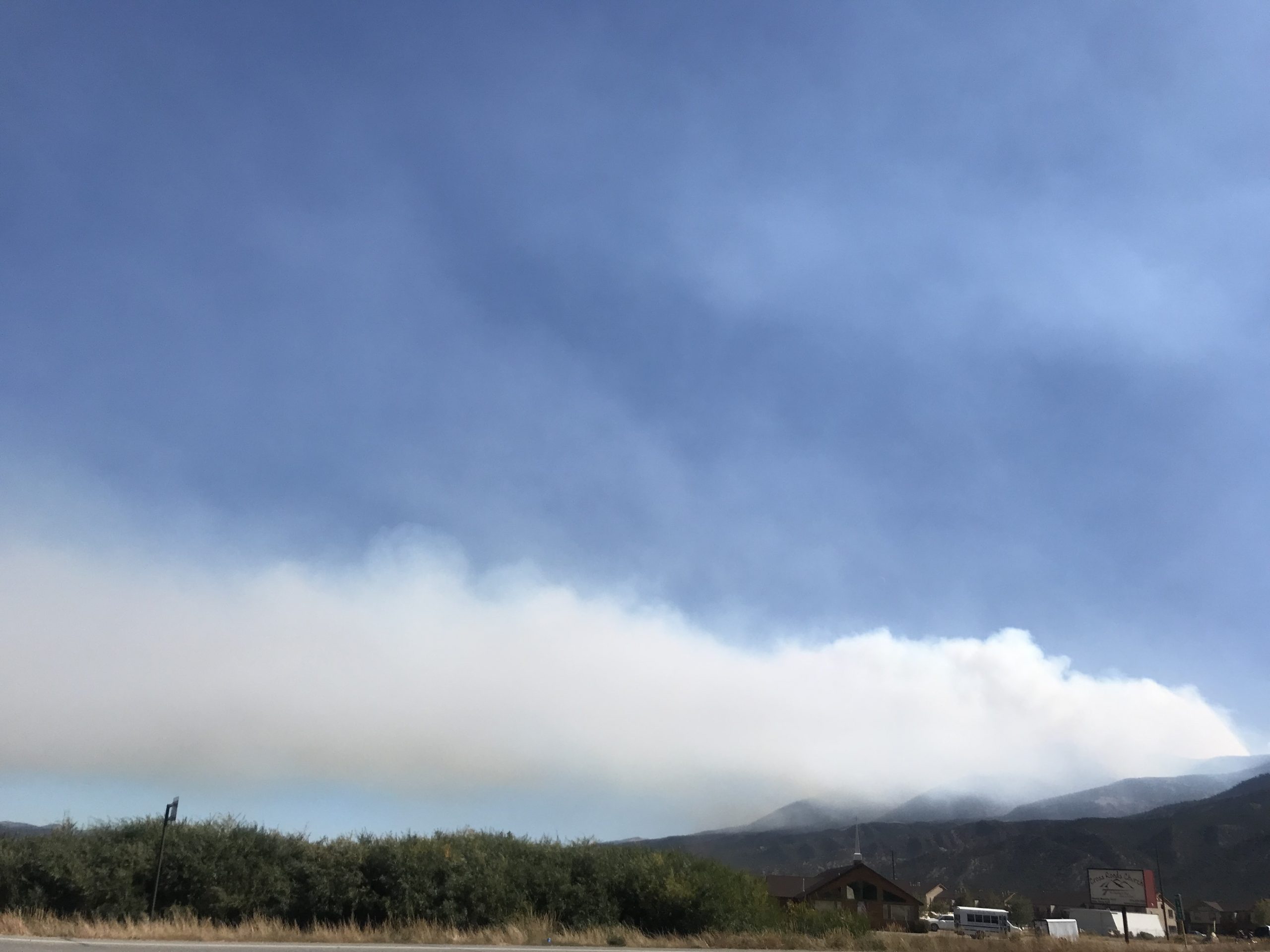 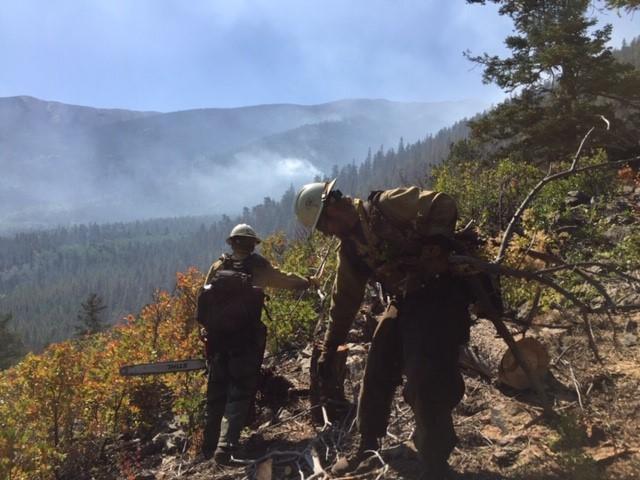 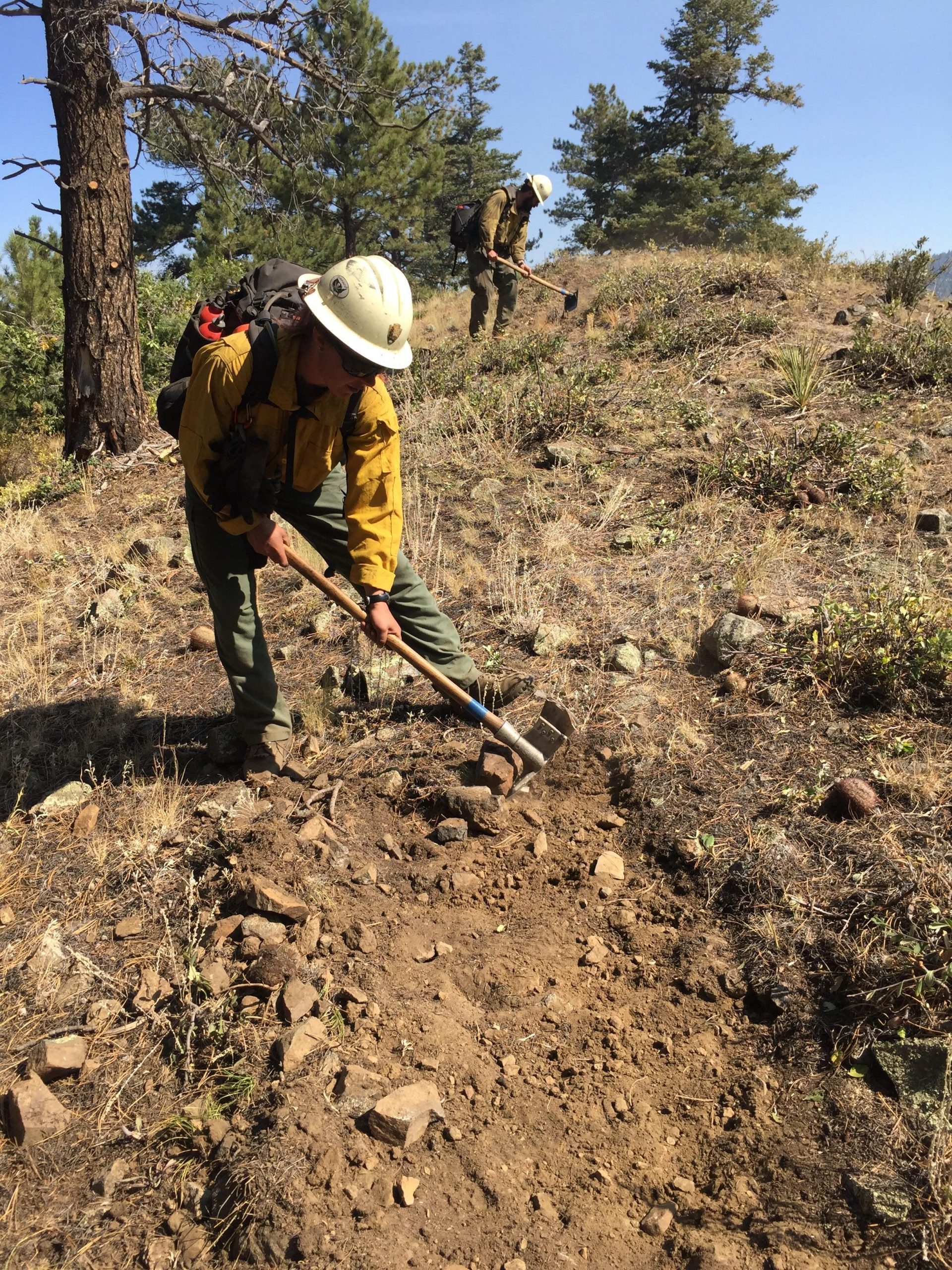 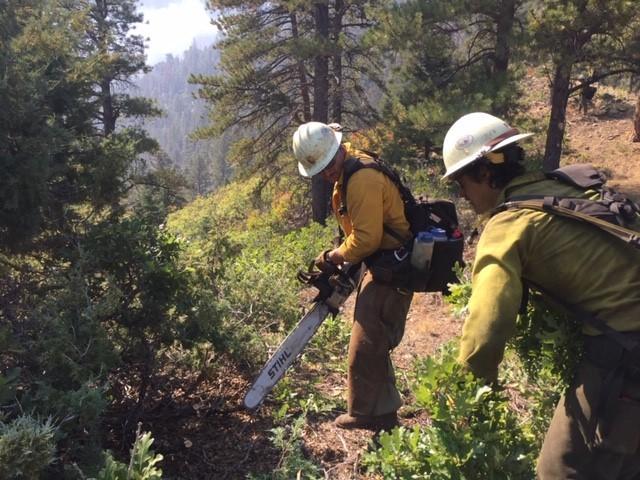 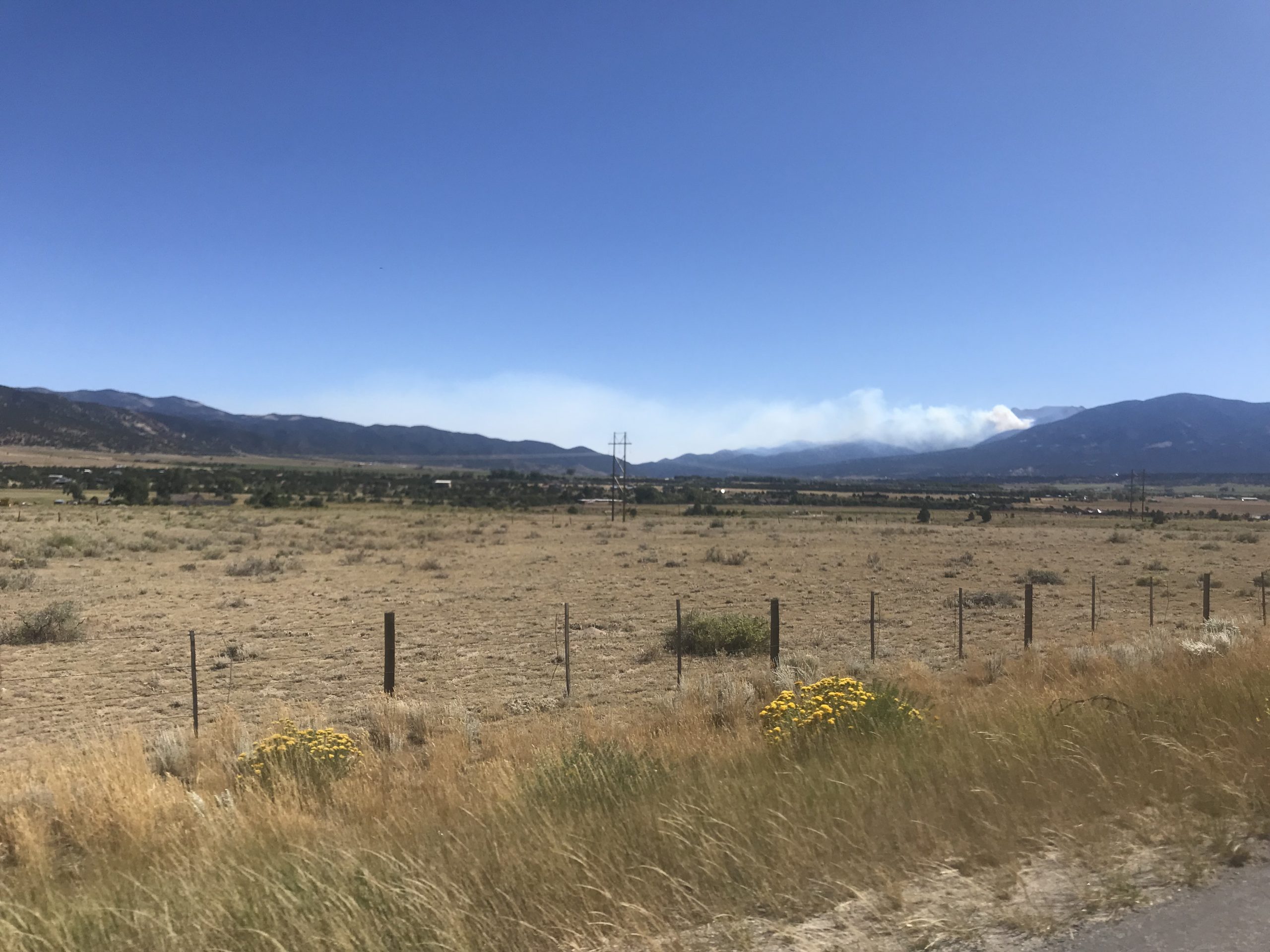 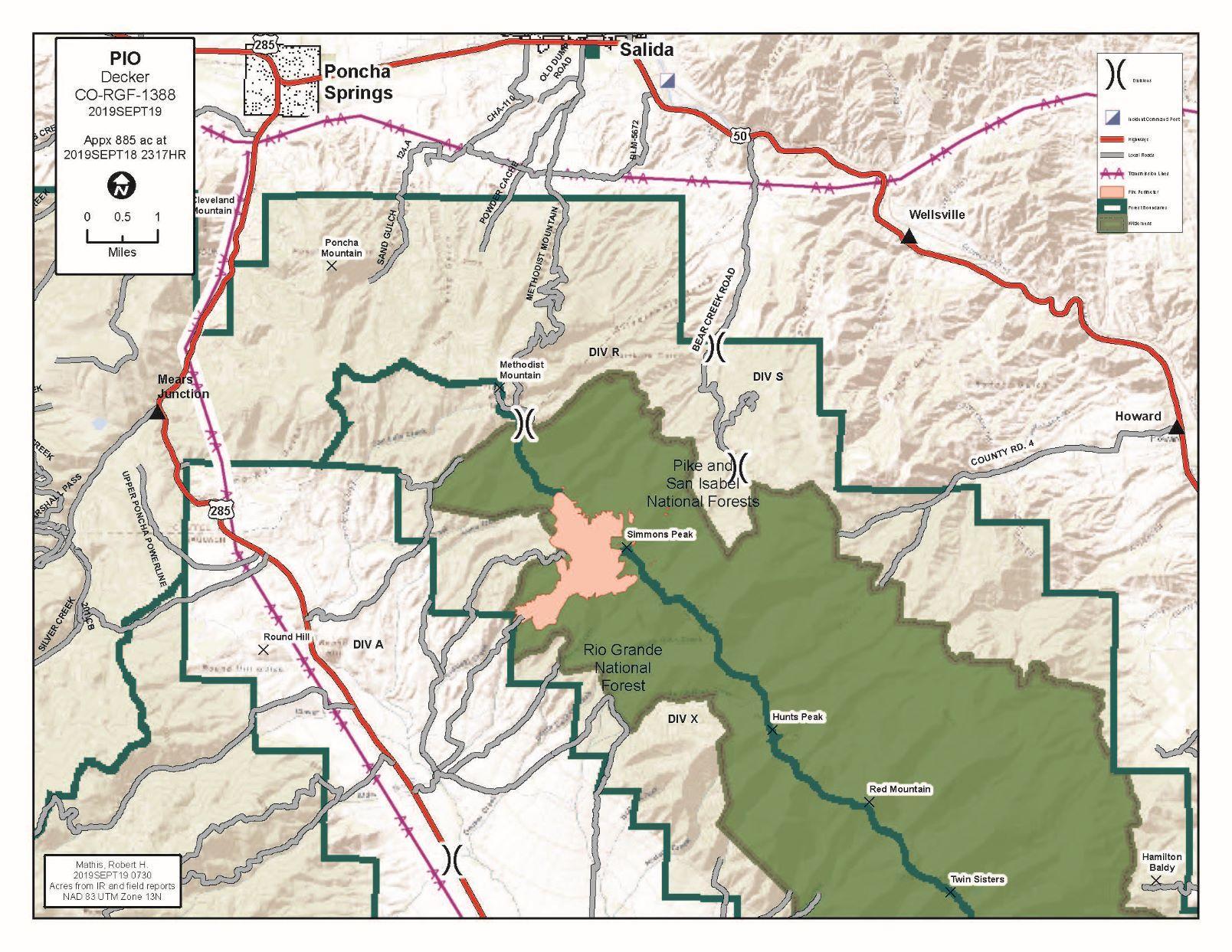 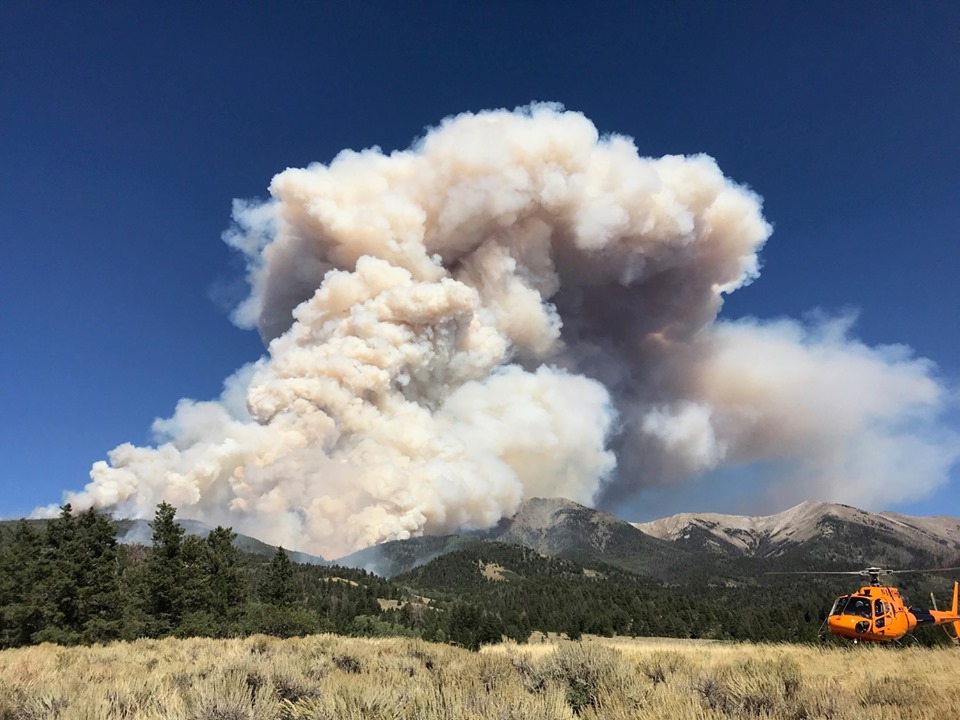 The Decker Fire burning near Salida is nearing 6500 acres, but now has 14 percent of the perimeter contained. Nearly 900 personnel are actively working the fire.

Temporary emergency road closures have been issued from the BLM San Luis Valley Field Office for BLM lands in Saguache County. “The closure covers areas east of US 285 from Poncha Pass on the north to the vicinity of Rock Creek on the south.”

There is now an interactive map for the Decker Fire:

As of Saturday morning, the Decker Fire is 5921 acres and 5% contained. It started 9 miles south of Salida and authorities say it's now 2 miles south of the town.

Chaffee County Sheriff John Spezee is confirming that a structure outside of the evacuation area has been lost. Spezzee says the structure was, "close to the boot on private land that is surrounded by public lands."

A Red Flag Warning is in place for the area and evacuation and pre-evacuation notices remain in place.

Authorities held a public meeting in Salida Saturday morning, which you can watch here:

Evacuations remain in place for about 130 homes in the area. Total estimated acreage for the blaze is now more than 5,800 acres with containment remaining at 5 percent. 9 News reports at least one structure has been damaged by the fire update, according to an update Thursday afternoon from the Rocky Mountain Incident Command team.

Officials say the fire was not as active Thursday as it has been in recent days.

Near-critical fire weather in the forecast Friday. There's the potential for Red Flag conditions in the area tomorrow. An Air Quality Alert for Fremont and Chaffee Counties has been extended through Saturday Morning. The CDPHE says winds are expected to increase once again on Friday afternoon, increasing fire behavior and smoke production. Officials say smoke may continue to be visible as far north as Park County, and as far east as Colorado Springs

The fire has been burning since September 8, mostly in the Sangre De Cristo Wilderness area. It is rougly two miles south of Salida.

Authorities say the fire made a "big run" in recent days, doubling in size to more than 5,300 acres. Evacuations are in place for some neighborhoods. The fire continues to burn mostly in the Sangre De Cristo Wilderness area. Crews are using retardant, along with heavy air tankers and helicopters, to fight the fire. Containment remains at 5 percent.

An air quality alert is in place through 9 a.m. Friday, Oct. 4th for southeastern Chaffee and northwestern Fremont Counties, including, but not limited to the communities of Poncha Springs, Smeltertown, Salida, Cleora, Wellsville and Howard. The Colorado Department of Public Health and Environment (CDPHE) says smoke from fire will be transported by southwesterly winds Thursday afternoon and evening. Smoke may be visible as far north as Park County, and as far east as Colorado Springs.

From September 8th to September 24, the Decker Fire grew to 1,150 acres and has remained predominately within the boundaries of the Sangre De Wilderness area. According to a release, the fire is being managed with "tactics for corralling and herding the fire in Wilderness and backcountry to limit fire spread to private lands, restore forest health resilience, and provide for community wildfire protection."

The U.S. Forest Service estimates that areas within the Wilderness have up to 80% tree mortality from beetle-kill and blowdown.

The Decker Fire is currently 937 acres spanning the San Isabel and Rio Grande National Forests. Officials say the fire is being managed to remove high-risk fuels  for both ecological benefit and to help mitigate the risk of a severe wildfire in the future.

Smoke may settle into the U.S. 50 corridor, and drivers are cautioned to reduce speed if visibility is affected. There are no evacuations or closures.

Officials say the Decker Fire grew Wednesday evening into Thursday, to 885 acres based on an overnight infrared flight. Crews will continue constructing a contingency line along the western flank of the fire as well as work to build a barrier along the Rainbow Trail on the eastern side of the fire.

Original story, published September 16, 2019: Heavy smoke is possible along Highway 50 as a result of the Decker Fire, burning roughly 9 miles south of Salida. The fire grew to just under 850 acres over the weekend. There are currently no evacuations or closures.

The fire was first reported more than a week ago. Officials say it was started by lightning and is 0% contained.

Smoke from the blaze could be seen throughout the region Sunday. Late last week air quality advisories were issued for Saguache, Chaffee and Fremont Counties because of the smoke.

As of last report, the fire remains on national forest lands and is primarily in the Sangre De Cristo Wilderness. Officials say crews will continue monitoring the east side of the fire and "allow the fire to play its natural role in promoting forest health and resiliency."

Drivers are encouraged to reduce speed near the fire if smoke affects visibility in the Highway 50 corridor, where smoke may settle in the afternoon and evenings.

Watch the most recent update from officials below: