Tears were shed and hugs and kisses were exchanged at Fort Carson Army Base in Colorado Springs on Tuesday morning as about 120 troops reunited with their families after a nine-month tour in the Middle East.

Amber Bearden waited in the gymnasium where the ceremony was held with her 2-month-old baby, Jaxon. A hand-made sign that read “My hero is finally home! I call him daddy” was taped to the baby’s stroller.

Bearden and Jaxon were joined by friends Nataly Cromartie and Jazlyn Davila, who also waited for their spouses.

“I haven’t slept,” Davila said, adding that she was nervous and had butterflies. “The last five months it went by smooth. The first couple of months it was hard.”

Some people brought snacks and food to greet their loved ones while others had balloons in tow. The troops walked into the gymnasium in formation as the Toby Keith song “Courtesy Of The Red, White And Blue” played overhead.

When the soldiers were dismissed, they shouted with excitement, some even running across the gym to reunite with their families on the bleachers.

Davila and her husband, Brian, greeted each other with a hug and kiss. They laughed about the tension during the ceremony and watching each other from across the gym. 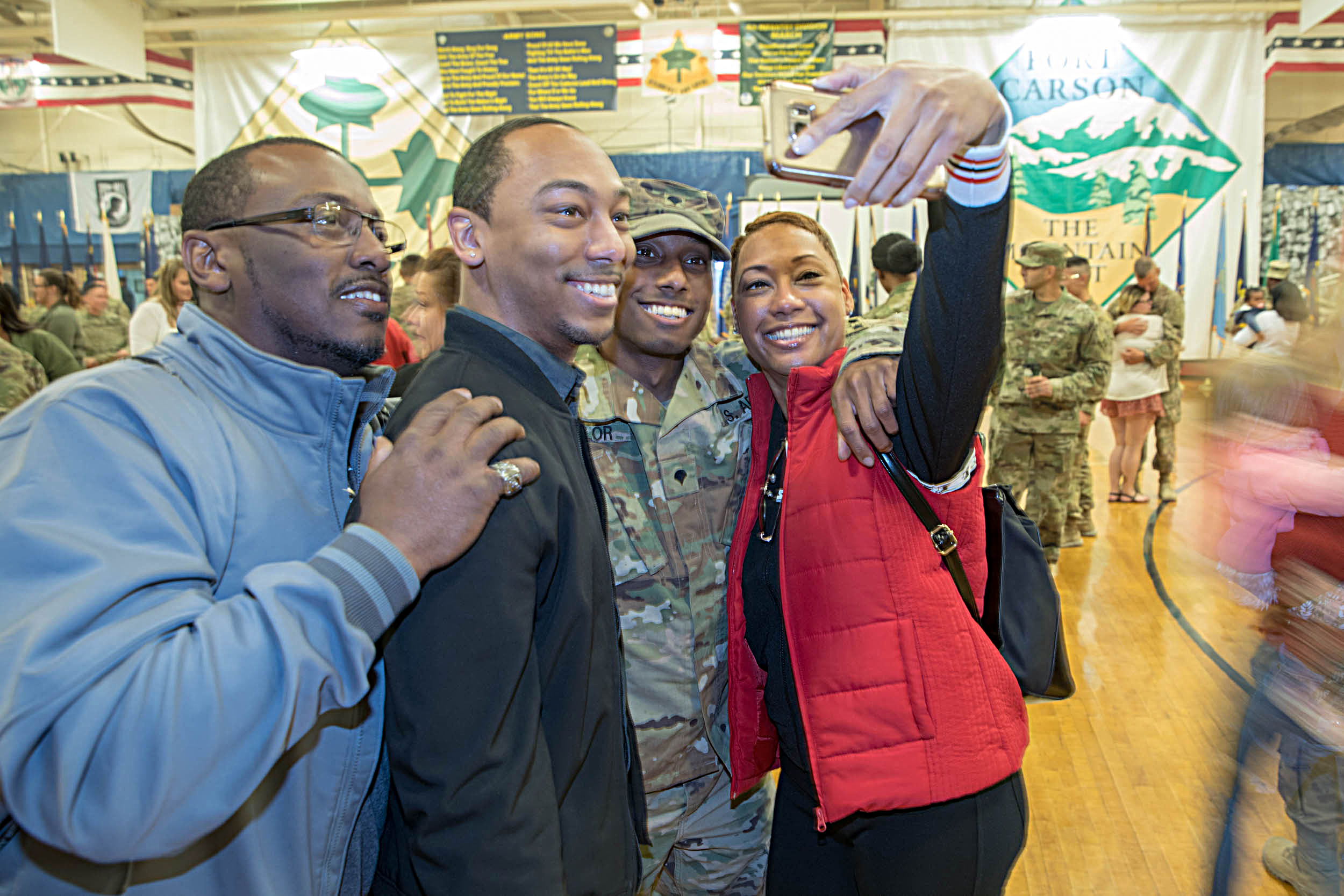 Hart Van Denburg/CPR NewsArmy Spc. Brandon Taylor poses for a family selfie with his father Jerry Taylor at left, brother Dorian Taylor, and mother Stacey Barrow, at right. He's one of about 120 members of the 183rd Support Maintenance Company, 4th Infantry Division returned Tuesday Oct. 15, 2019 at Fort Carson after a nine-month deployment at various locations in the Middle East. 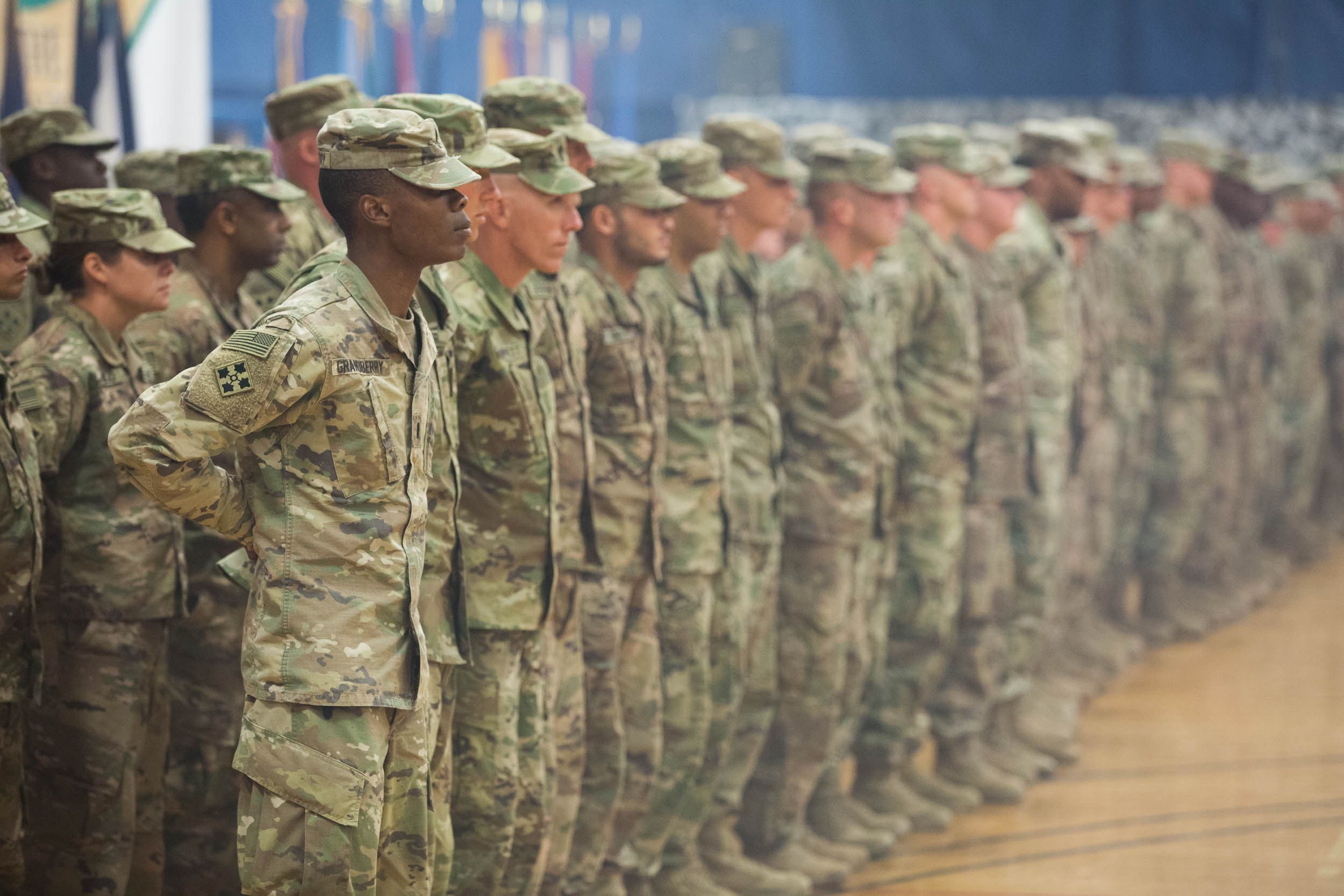 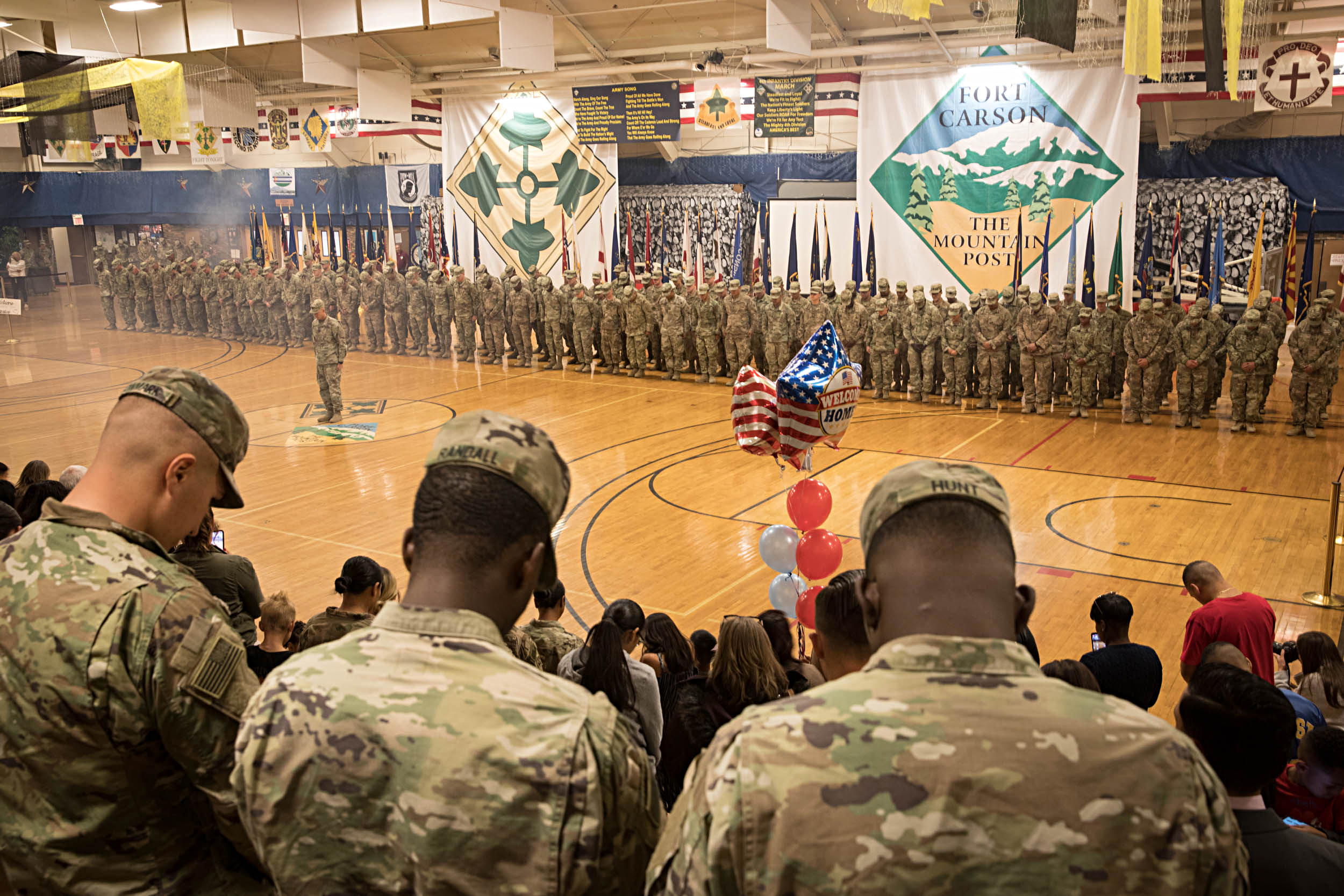 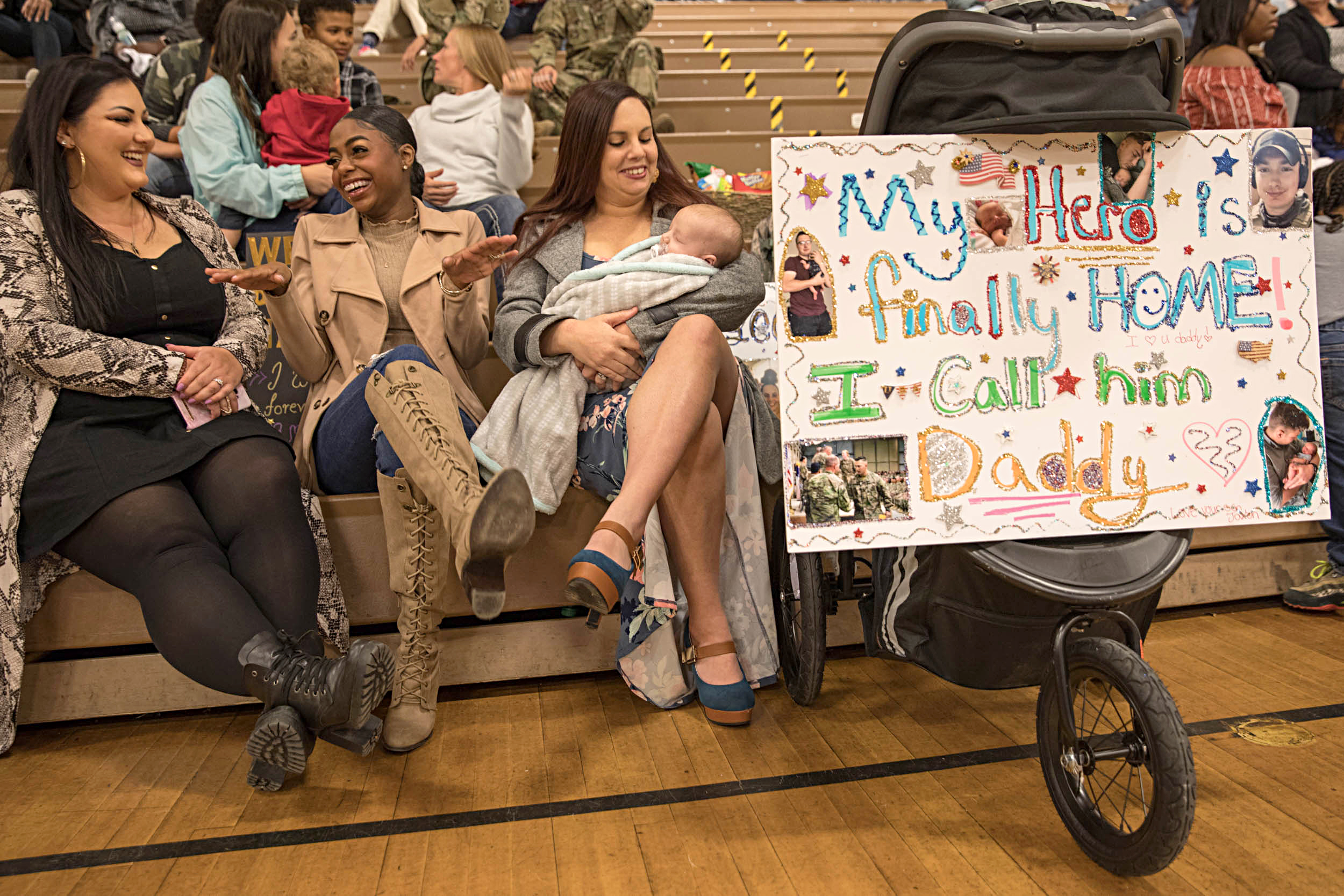 Hart Van Denburg/CPR NewsFrom left, Nataly Cromartie, Jazlyn Davila and Amber Bearden wait to be reunited with their husbands as about 120 members of the 183rd Support Maintenance Company, 4th Infantry Division returned Tuesday Oct. 15, 2019 at Fort Carson after a nine-month deployment at various locations in the Middle East. 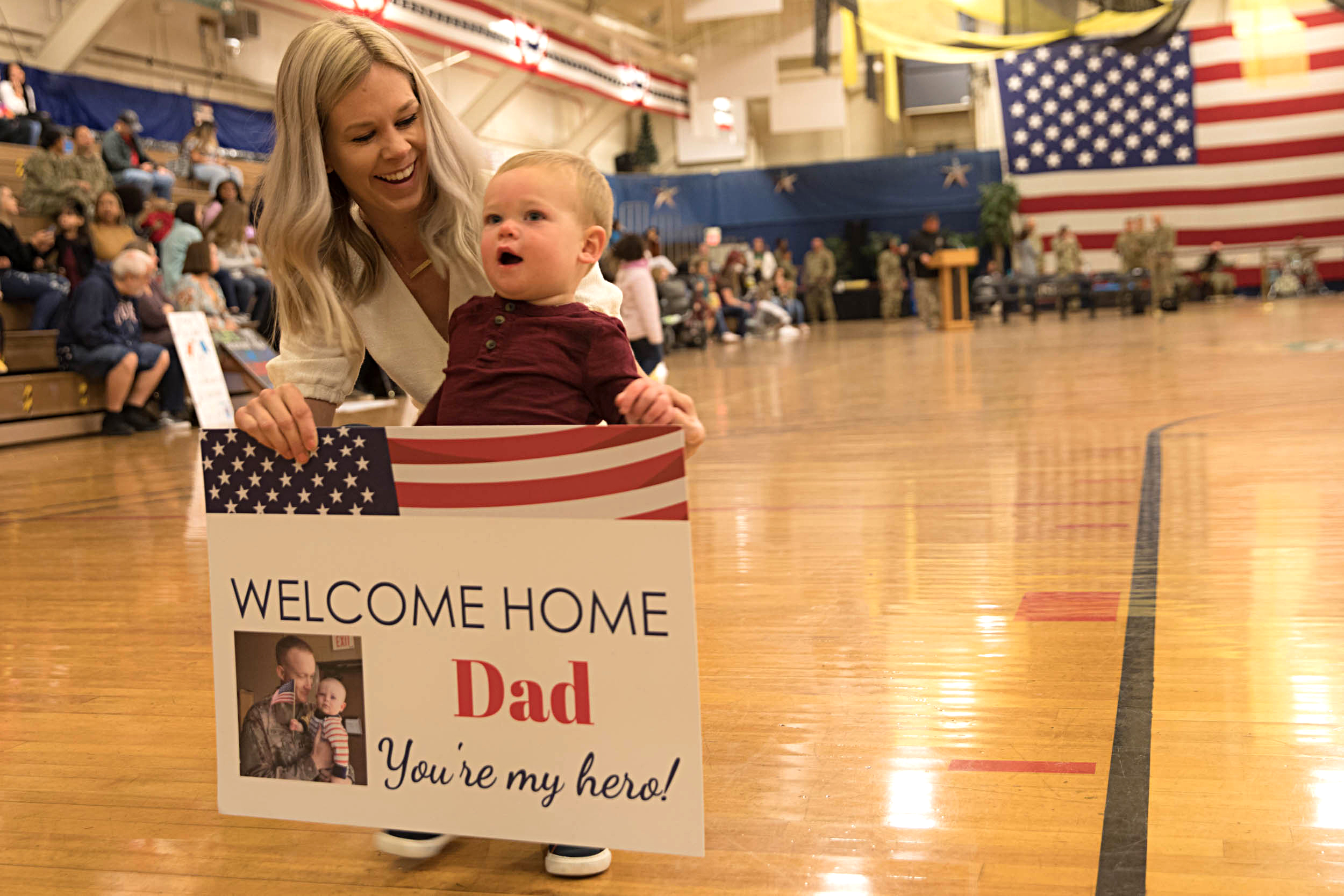 Hart Van Denburg/CPR NewsKaitlin Fortenberry and her 16-month-old son Leo pose for a friend's camera as they wait for about 120 members of the 183rd Support Maintenance Company, 4th Infantry Division returned Tuesday Oct. 15, 2019 at Fort Carson after a nine-month deployment at various locations in the Middle East. Fortenberry's husband Tyler is the company commander.

“I’m over here looking and it’s that excitement and you’re getting anxious so I was real anxious and I didn’t know where I was going to find her at,” Brian Davila said.

Caleb Bearden cuddled his son in his arms. He was able to meet Jaxon right after he was born and marvelled at how much the baby has grown.

Parents Hector and Anna Valdez had tears in their eyes as they hugged their son, Justin Valdez. They flew to Colorado from San Diego for their son’s return ceremony.

“We’re just so very proud of him,” Anna Valdez said. “He’s our first son to be in the military. We’re proud of him, thankful for America and the men and women that serve.”