Dusk has turned into night and what was a gentle breeze transformed to a steady wind. Despite the increasing cold, Sheldon Steinhauser only has a light jacket. As he stands at the foot of Selma, Alabama’s Edmund Pettus Bridge it’s not the elements that chill him.

He has been to this part of Alabama before. In 1965, he was part of a group of Coloradans who came to join the Rev. Dr. Martin Luther King, Jr. as he led a group of protesters on a 54-mile march from Selma to the state capital of Montgomery. Back then, he was a leader of the Denver chapter of the Anti-Defamation League, a 34-year-old Jewish White man fighting against injustice.

On March 7, 1965, the day that came to be known as Bloody Sunday, Steinhauser wasn't in Selma at the bridge. That was the first time marchers tried to hike the 54 miles from Selma to Montgomery, only to be beaten and tear-gassed by state troopers. When the group made a third, successful attempt almost three weeks later, Steinhauser joined them and took the time to say hello to King. The following morning, the group walked the final 10 miles or so to the capitol.

Today, Steinhauser still fights; he has returned to Alabama for the first time in over 50 years as a scholar-in-residence for another group from the ADL.

Scott Levin, the current regional director for the Rocky Mountain chapter of the Anti-Defamation League, said the 50 or so people on this trip are there "because we need to look at the past in order to understand the civil rights challenges that we face today."

After so much time, Steinhauser admits it's hard to say where the roadside encampment where he shook King's hand is located. While the landscape has changed, Steinhauser said the feelings and emotions from more than 50 years earlier rushed back the moment his feet touched the pavement.

"I’m not sure how I can describe it," he said. "So many terrible things happened here, and I’m trying to keep an open mind about the progress that’s been made since that time, but they stirred memories of the hatred that we felt when we got here and how frightened some of us were — many of us were — about being in this place."

"All of these things that demonstrated the hate, the turning off of the water spigots so we couldn’t drink any of the water in town. The pointing of the finger on the part of a state patrolman in a car, a state police car, and we thought, 'Oh great, if we need police protection, what’s that gonna be like?'"

As the group strolls through the National Memorial for Peace and Justice in Montgomery, an open space park with more than 800 steel slabs, etched with the names of more than 4,000 lynching victims, one realizes the tricky line being walked. Acknowledging the anger that rises within while navigating the area's history and, at the same time, appreciating that the stories of those days are still indeed told, perhaps in the hopes they will lead to meaningful change.

The next stop is the Legacy Museum. Founded by noted civil-rights attorney Bryan Stevenson, author of the book (and recent motion picture) "Just Mercy," the structure is based in a building where slaves were imprisoned just a block away from where they were auctioned off.

Interactive displays tell those and many other stories, ranging from slavery to mass incarceration to triumphs like the Montgomery bus boycott, led in part by a woman who refused to get up from her seat, Rosa Parks. 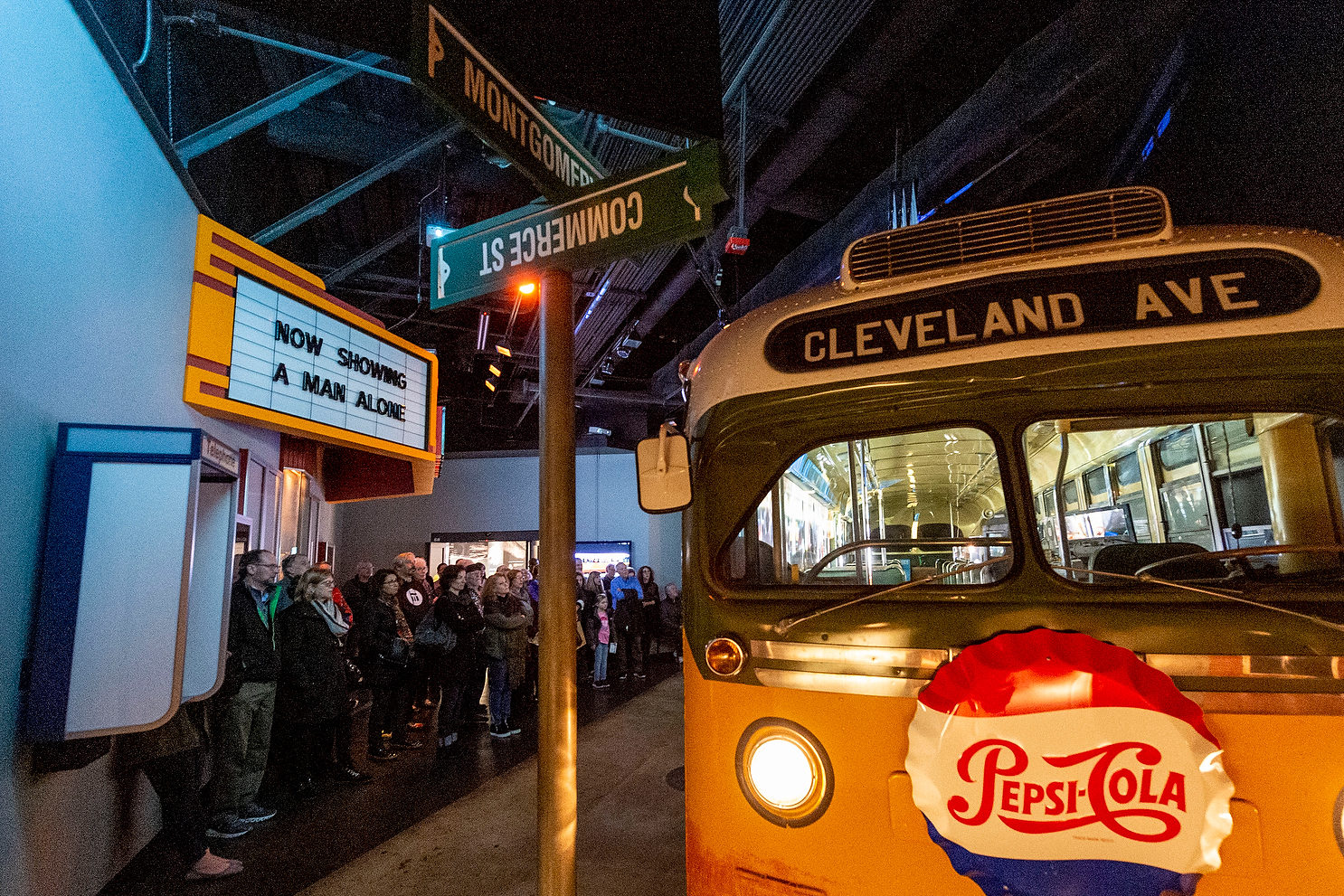 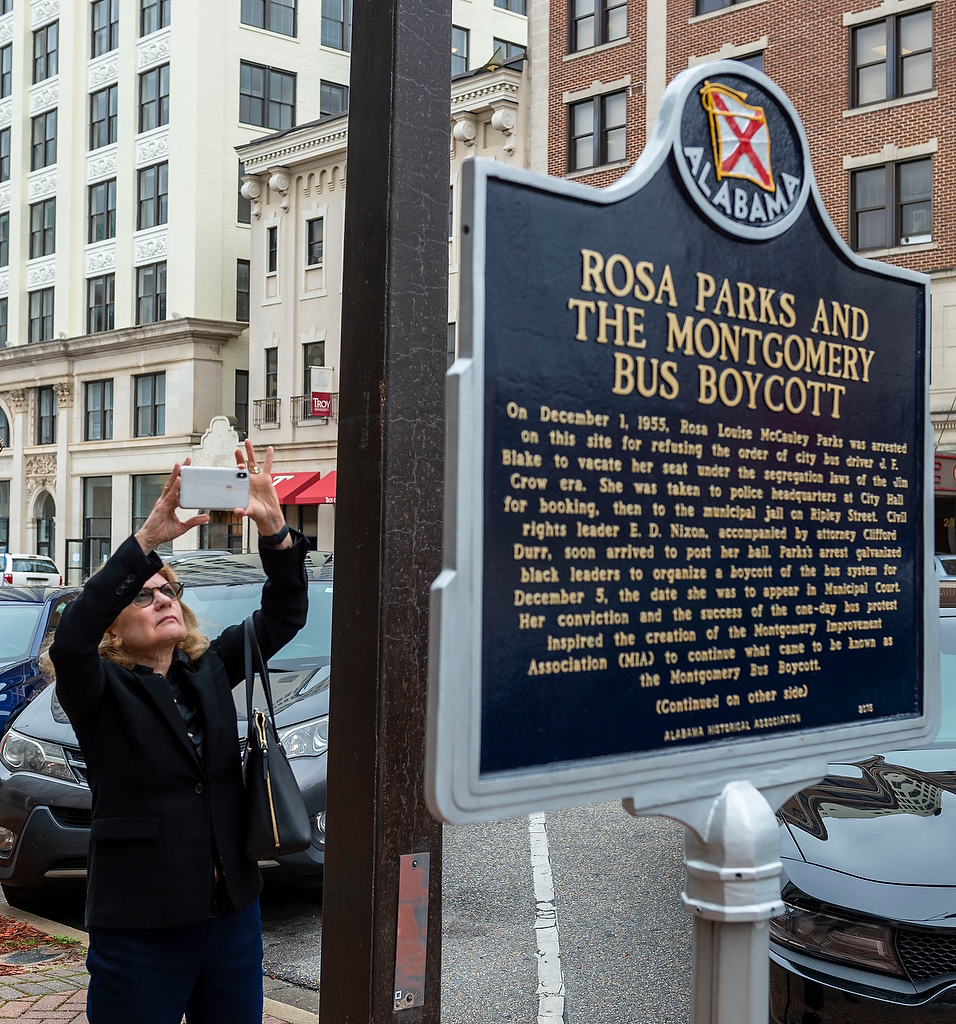 Vasha Hunt/For CPR NewsSusan Cooper captures an image of the historical marker for the arrest of civil rights activist Rosa Parks, outside the Rosa Parks Library and Museum as an Anti-Defamation League tour group from Denver explored civil rights landmarks Monday, Feb. 17, 2020, in Montgomery, Ala. 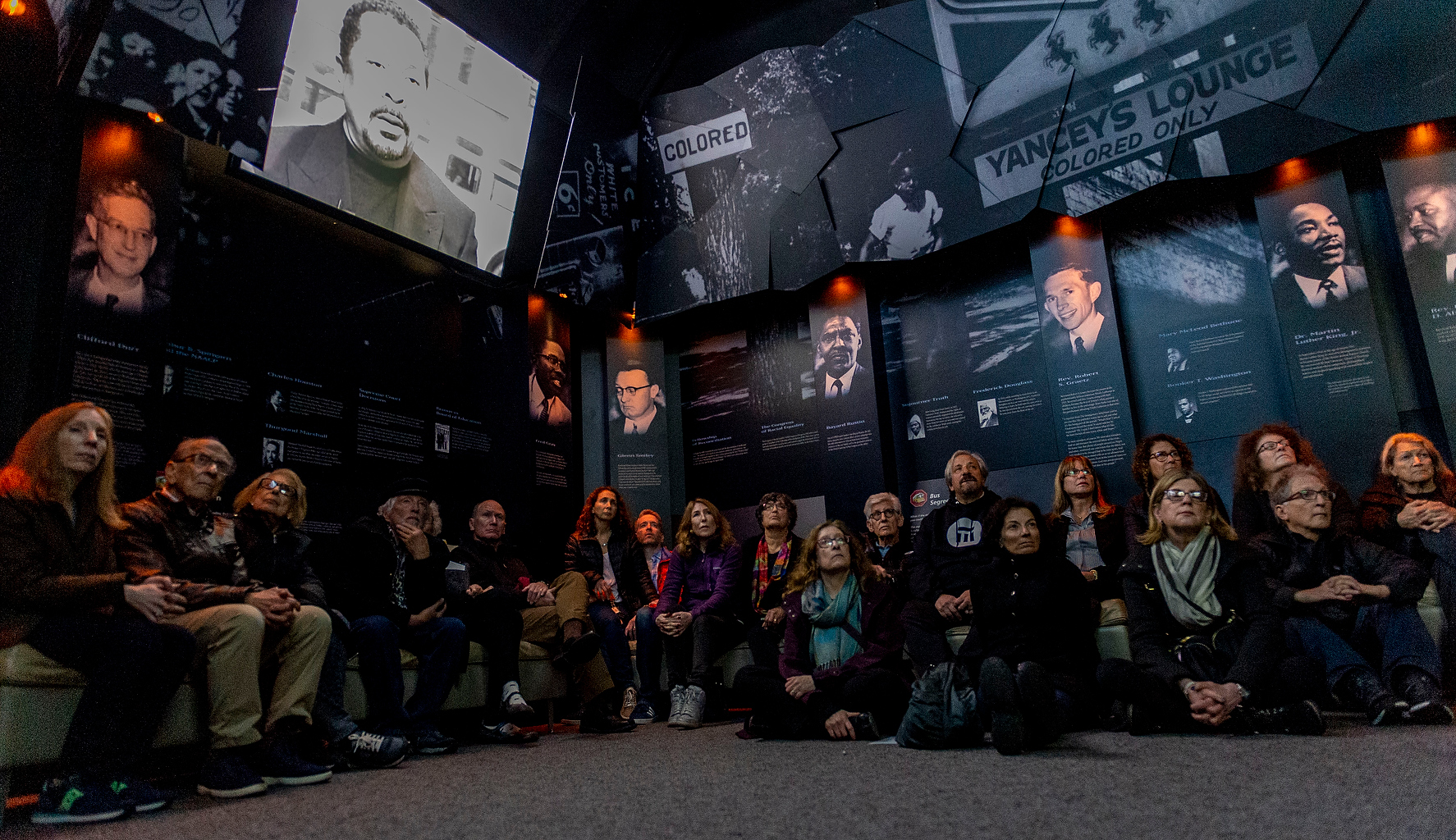 Vasha HuntAn Anti-Defamation League tour group from Denver sits and watches video setting the scene of the arrest of civil rights activist Rosa Parks in the Rosa Parks Library and Museum Monday, Feb. 17, 2020, in Montgomery, Ala. 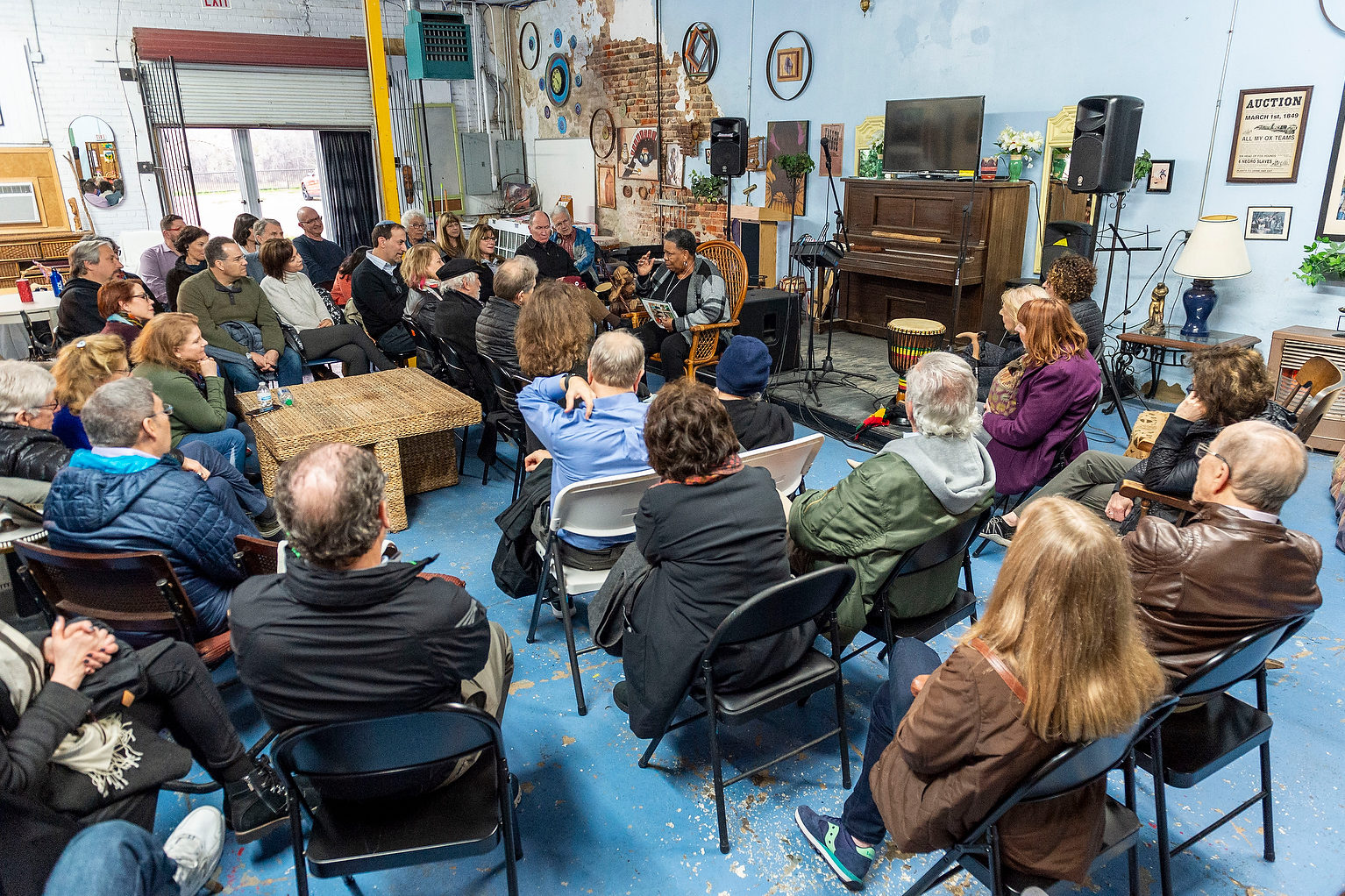 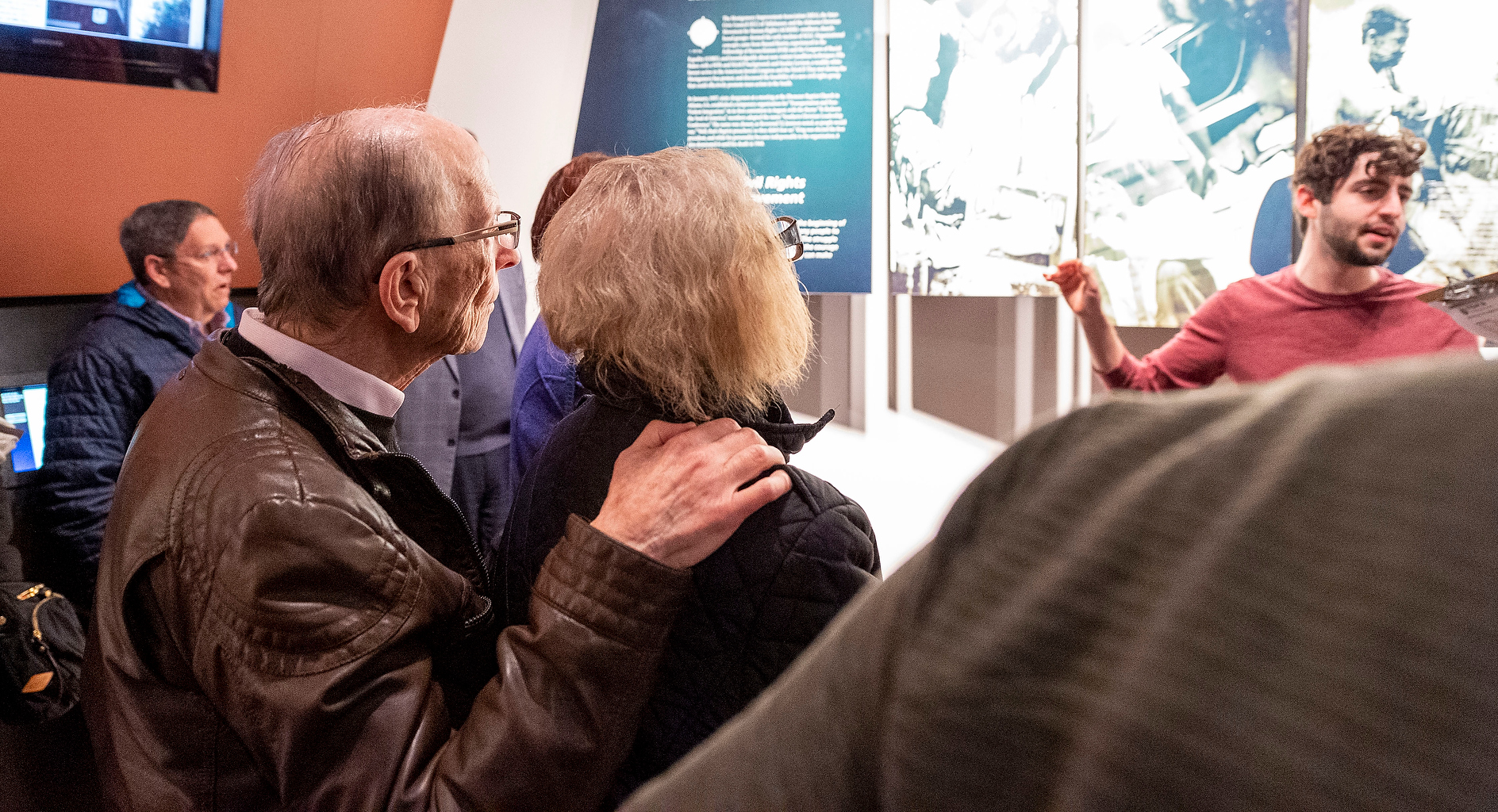 Vasha Hunt/For CPR NewsSheldon Steinhauser embraces his wife, Jan, as they listen to a lecture by Gil Eplan-Frankel of Etgar 36 (a not-for-profit Jewish educational organization) regarding the entire Civil Rights movement after a tour of the Rosa Parks Library and Museum during an Anti-Defamation League tour of civil rights landmarks Monday, Feb. 17, 2020, in Montgomery, Ala. Steinhauser participated in the 1965 civil rights Selma to Montgomery march. 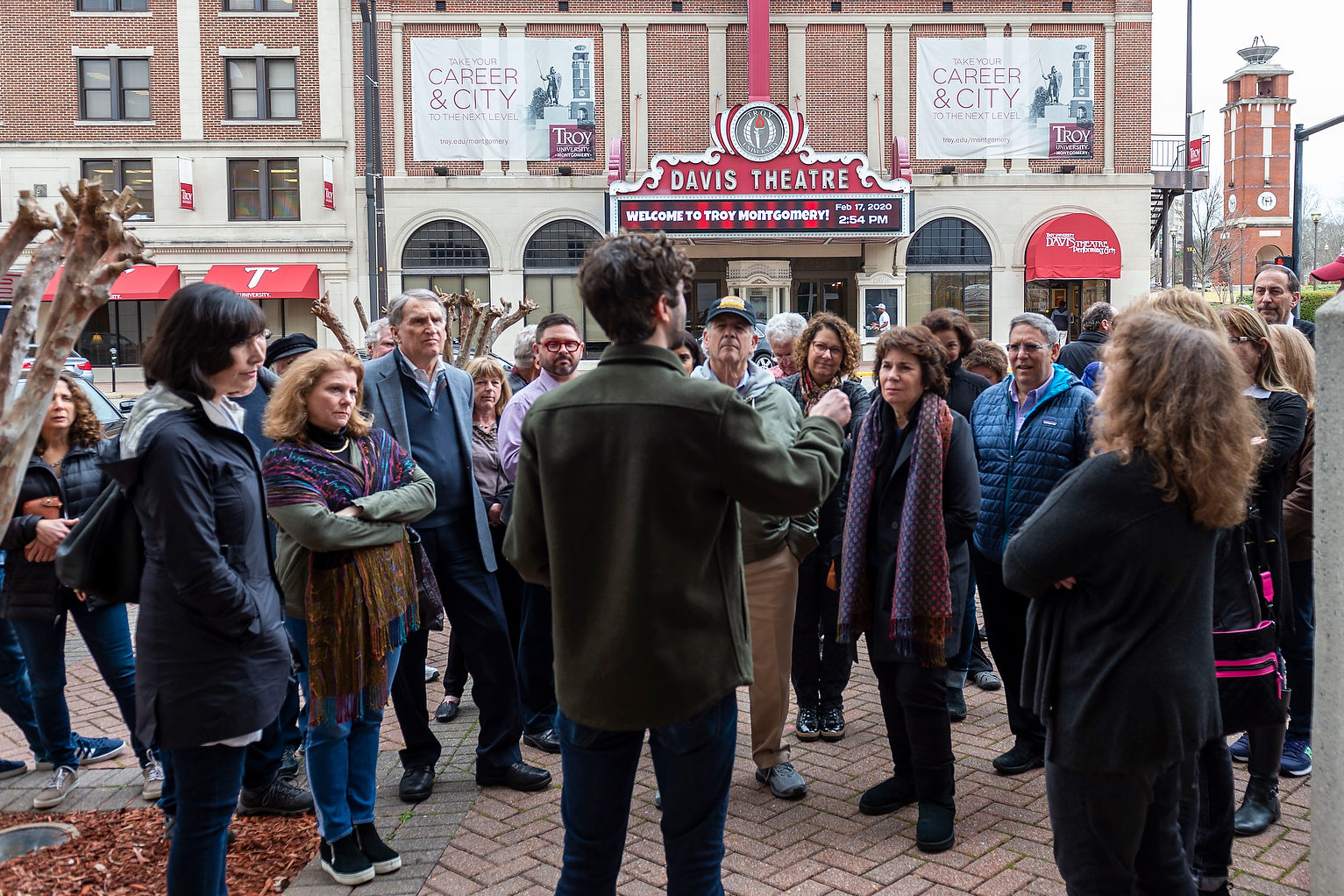 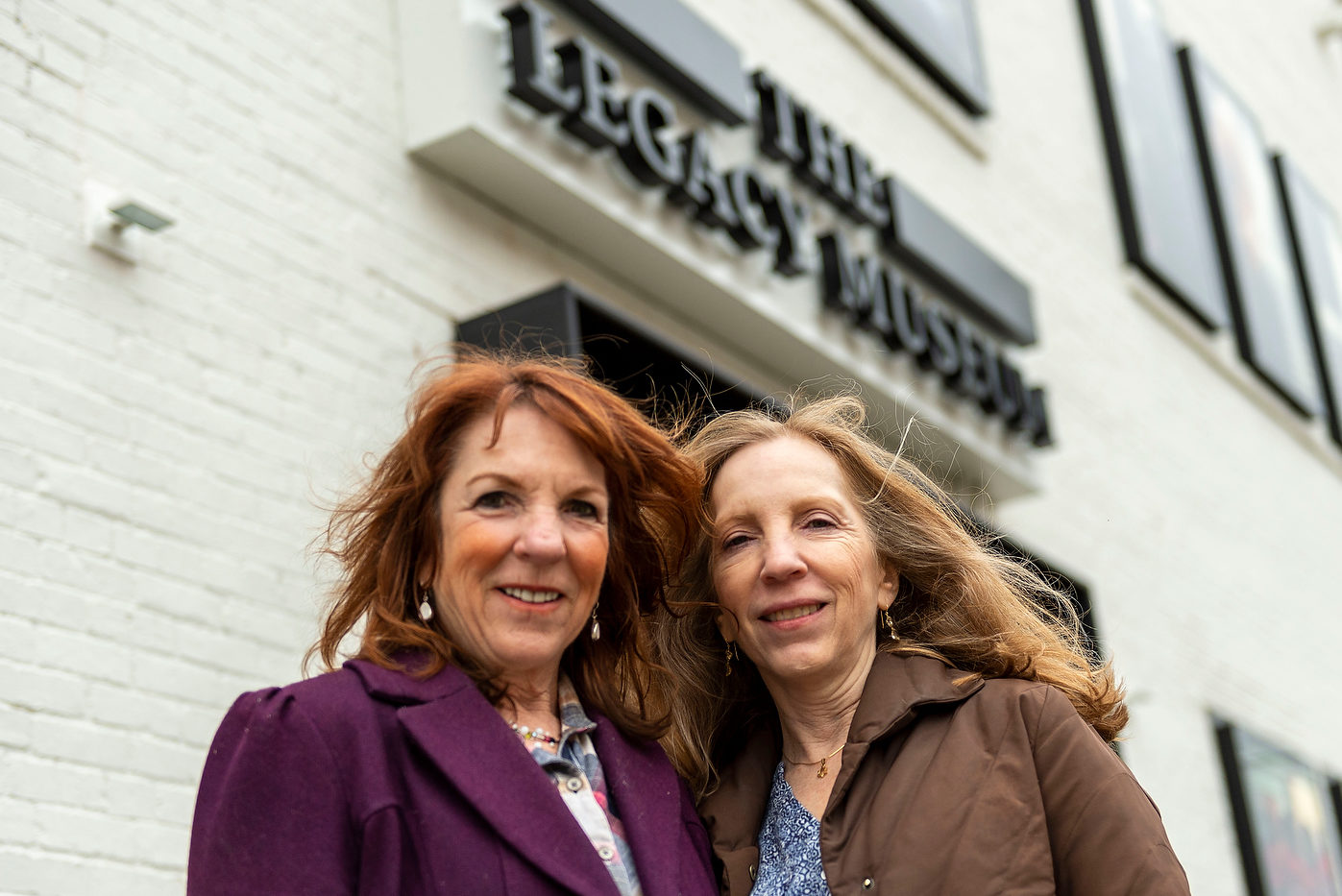 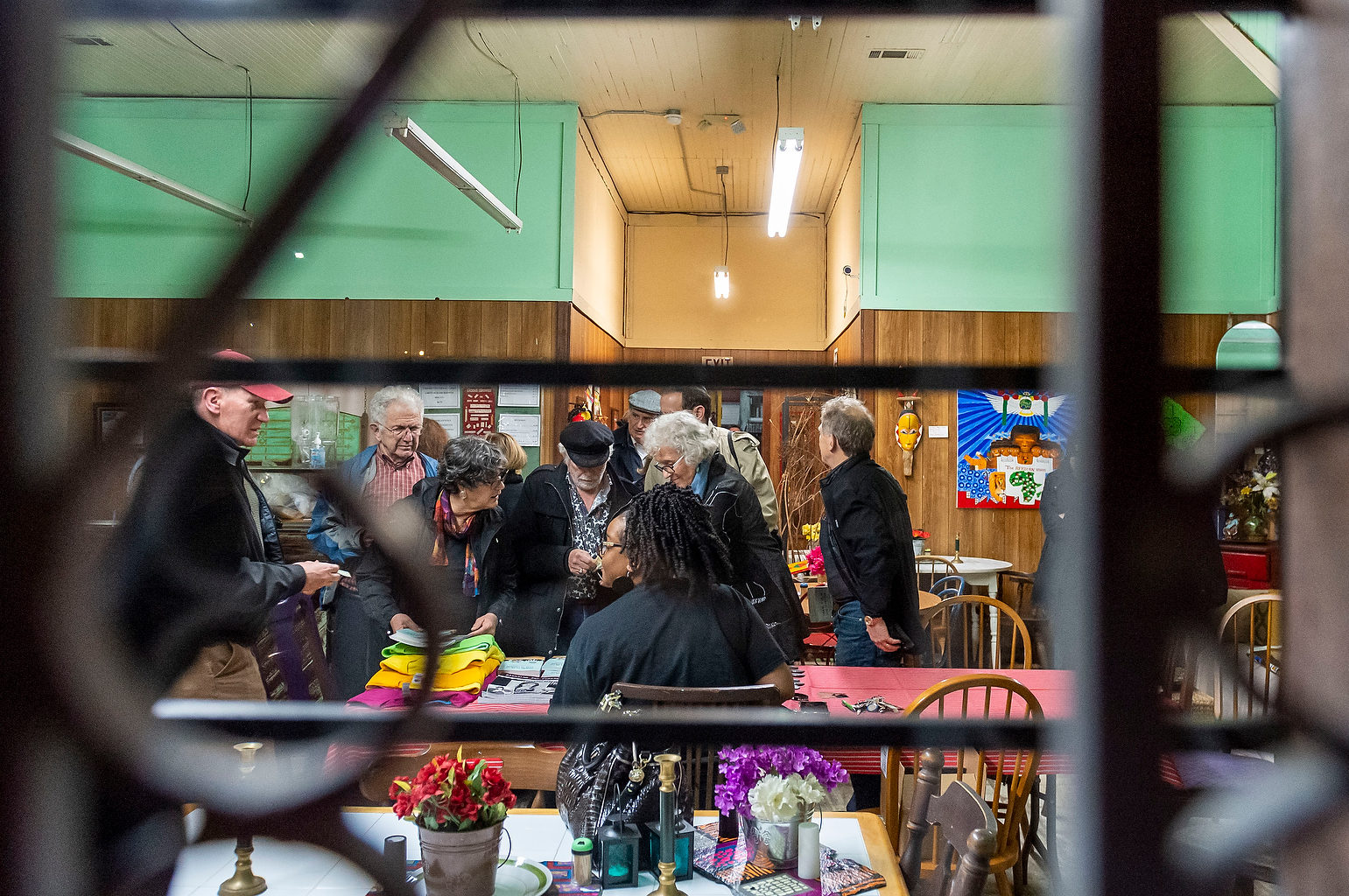 Vasha Hunt/For CPR NewsAnti-Defamation League tour group from Denver pick up literature on the Selma to Montgomery civil rights marches of 1965, Monday, Feb. 17, 2020, in Selma, Ala. 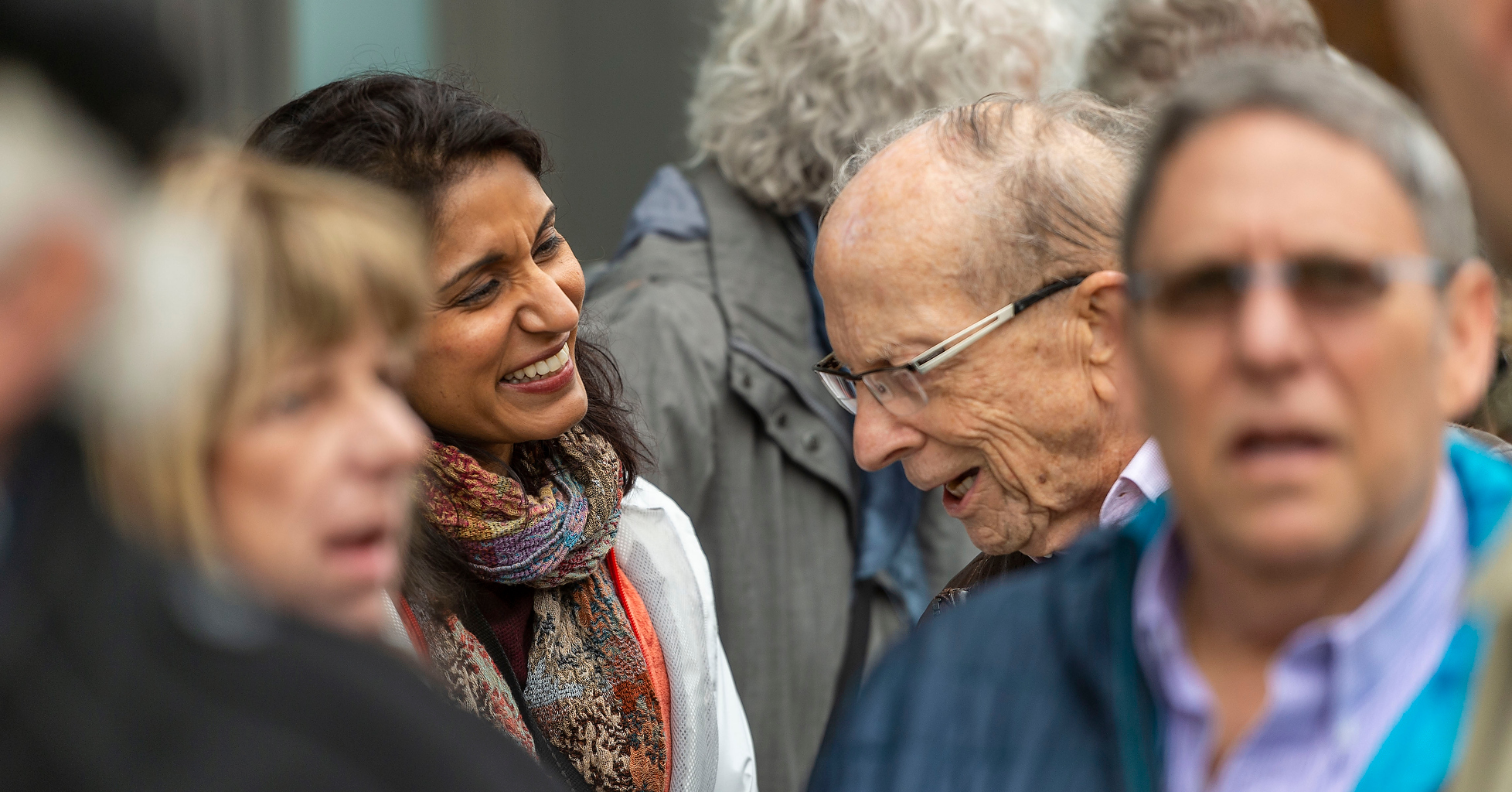 Vasha HuntTara Raju, left, smiles as she talks with Sheldon Steinhauser about his civl rights experiences while they participate in an Anti-Defamation League tour group’s exploring of civil rights landmarks Monday, Feb. 17, 2020, in Montgomery, Ala. 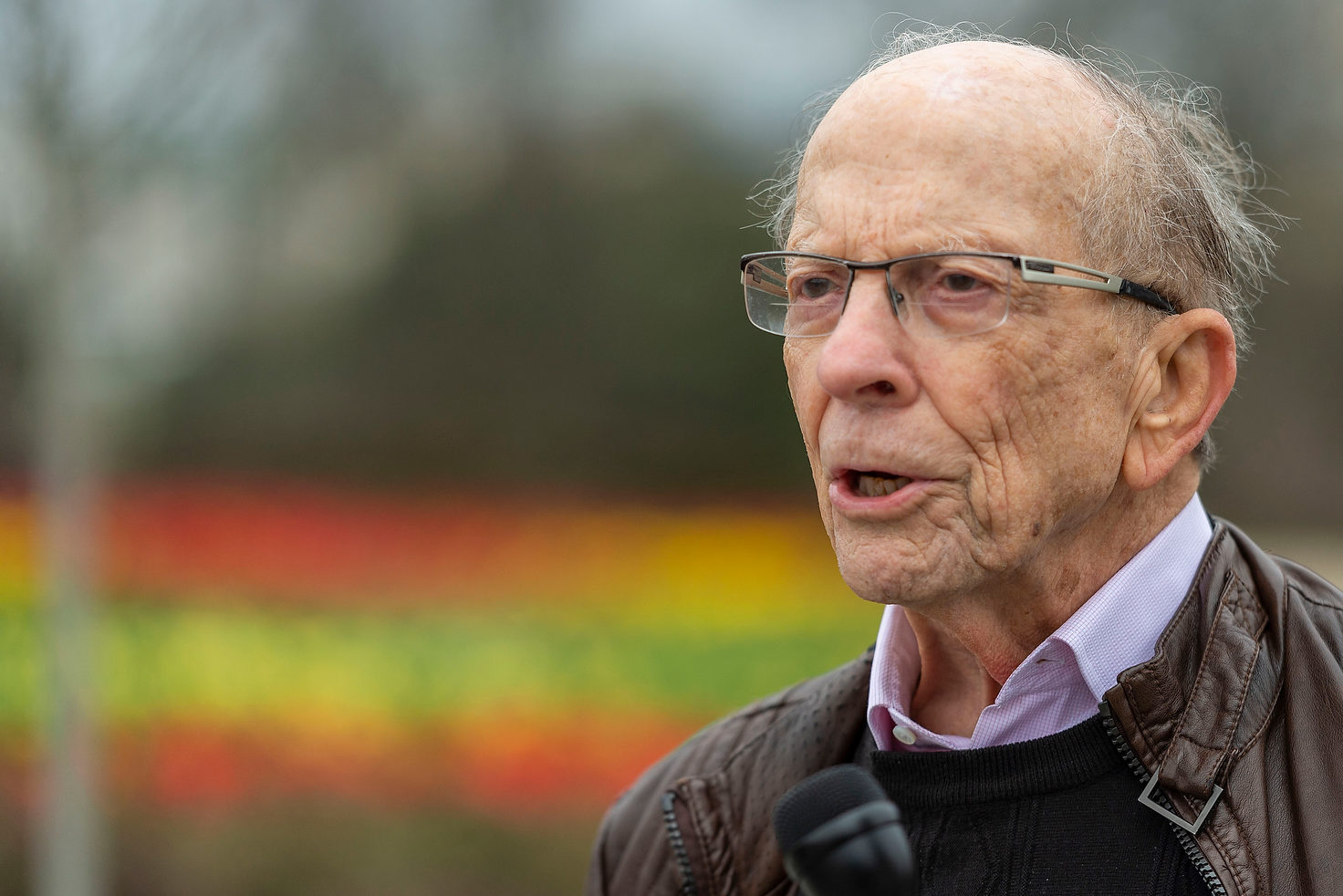 Vasha Hunt/For CPR NewsColoradan Sheldon Steinhauser, who marched with Martin Luther King Jr. in the 1965 Selma to Montgomery civil rights march, remembers his experiences as he and a group of Anti-Defamation League members toured civil rights landmarks Monday, Feb. 17, 2020, in Montgomery, Ala.

"We want to create an institution that allows people to experience directly what this history means, what it does," Stevenson says in a trailer on the museum's website. "In South Africa, you can’t go there without learning the history of apartheid; In Rwanda, you cannot spend time there without being told of the legacy of the genocide. If you go to Germany today, in Berlin, there are monuments, memorials and stones that mark the spaces where Jewish families were abducted.

The out-of-towners who came to Alabama in the 1960s often referred to themselves as "24-hour heroes," Steinhauser said. It was a reflection on their temporary presence, as opposed to the people who were involved in the struggle on a daily basis. People like JoAnne Bland. She grew up in Selma amid the turbulent times and told the ADL group that by the time she was 11 she had been arrested 13 times.

Back then, her idea of freedom was based on a vision and a fantasy. And ice cream.

"Carter’s Drug Store had a lunch counter and I wanted to sit at that lunch counter, but my grandmother said I couldn’t. She said Colored children, that’s what we were called then, Colored. Colored children can’t sit at the counter," Bland said. "It didn’t stop me from wanting to sit at that counter; every time I passed by there, seeing those white kids licking those ice cream cones, spinning around on those stools. It looked like so much fun."

On one particular day, her grandmother noticed, leaned over Bland's shoulder to point to the window and the counter beyond and told her, "When we get our freedom, you can do that too."

But freedom enacted a heavy toll. On Bloody Sunday, Bland found herself at the crest of the Edmund Pettus Bridge, looking at the first wave of marchers who tried to advance past the troopers.

"Suddenly, I hear gunshots and screams. I think they’re killing the people down there," she said. "Before we could turn to run it was too late. They came from both sides, the front and the back, and they were just beating people. Old, young, Black, White male, female, it didn’t matter. People were laying everywhere, bleeding, not moving, as if they were dead and you couldn’t stop to help them or you’d be beaten too.

"The last thing I remember seeing on that bridge that day was this horse and this lady. And I don’t know what happened. Did the man on the horse hit her and she fell or did the horse just run over her? I don’t know. But I do know almost 55 years later, I can still hear the sound her head made when she hit that pavement... I didn’t want any more freedom. Whatever the cost of what this freedom was was just too much for this 11-year-old."

Even as Bloody Sunday discouraged her, Bland stayed in the fight.

She never sat at the counter at Carter's Drug Store, but she did join King and the marchers on the final leg of their journey to Montgomery.

At the end of her discussion with the Anti-Defamation League group, Bland shared a moment with Steinhauser and another participant on the trip, Steven Foster, the rabbi emeritus at Temple Emanuel in Denver. Foster also marched in Montgomery in 1965.

"You guys were really in danger," Bland told them. "Me, I could blend in then, but you couldn’t stay at hotels. You were outside agitators, your life was in danger every minute you were here.

"And yet you came. And we thank you."

Perhaps the warmth was enough for Steinhauser. It was the end of a long day, a physically and emotionally wrenching one that certainly would have taxed the resolve of a much younger person.

Then again, in the face of shared experiences and deep-seated respect, who wouldn't be ready, eager and willing to wade once again into the fight?

So Sheldon Steinhauser walked across the Edmund Pettus Bridge.

"I’m very proud of today," he said. "I’m very proud of the Anti-Defamation League; I’m very honored they asked me to serve as their scholar-in-residence and I was able to share some of my personal experiences, because, you know, that’s how we tell our history, through stories."