Judy and her family have been preparing dozens of fresh, handmade tamales daily at the hole-in-a-wall restaurant for more than 40 years.

It all started with her parents — Edumenio, or “Eddie,” and Rosemary Aguilar. Eddie grew up in Colorado’s San Luis Valley and only received a third-grade level education.

“My dad was the bravest man ever,” Judy said, standing in the cramped area between the kitchen and the cash register. “For him to open up a restaurant, he was a hard worker and a go-getter, successful. I'm just so proud of him. What a legacy he’s left us.”

Eddie died in 2018. One of Allen’s favorite memories of her dad was that everywhere he went, he used to carry a jalapeno in his pocket.

“Because if we stop for a burger or something, he wanted always to have chile on his food," she said. "And now my dad has passed, I find myself doing the very same thing, is carrying a fresh jalapeno with me."

Allen was only six when the restaurant first opened, and it wasn’t long after that she and her siblings were put to work. But it’s not something she regrets.

Today, nine family members still work at the restaurant. Allen’s mother Rosemary is still an owner, but isn’t as involved anymore. That doesn’t mean she doesn’t have a say in how things are run though, according to Allen.

“This is her baby still, you know?” she said.

Family portraits hang on the walls of El Taco Rey, as well as numerous local and national awards the business has received. No dish is more honored than their pork green chile, which was named the best in the state by USA Today in 2018.

“Have you ever heard the saying, ‘Comida sin chile no es comida.'?” Allen said. 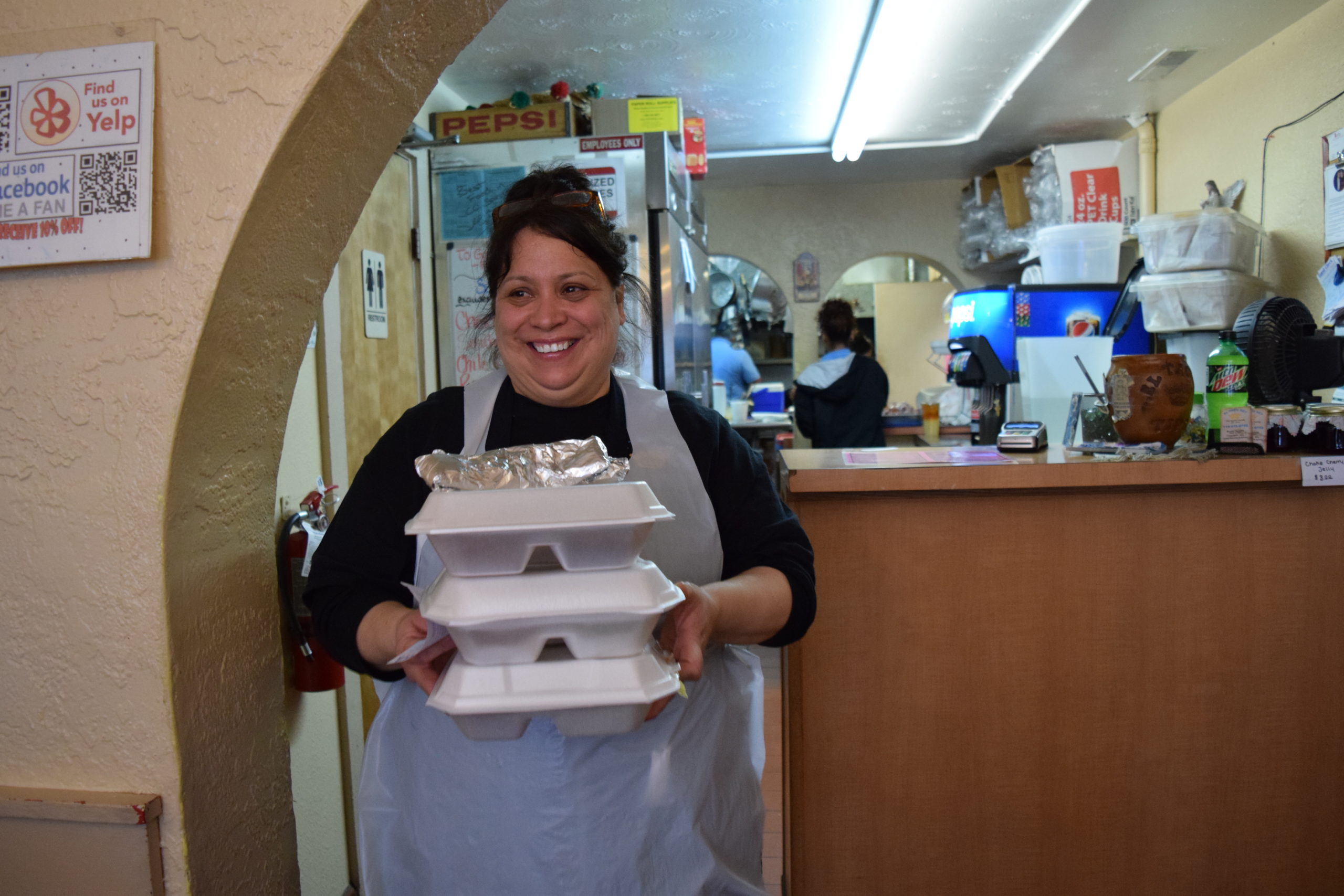 Xandra McMahon/CPR NewsJana Mitchell carries out an order from the back to the small dining room at El Taco Rey in Colorado Springs on March 3, 2020. 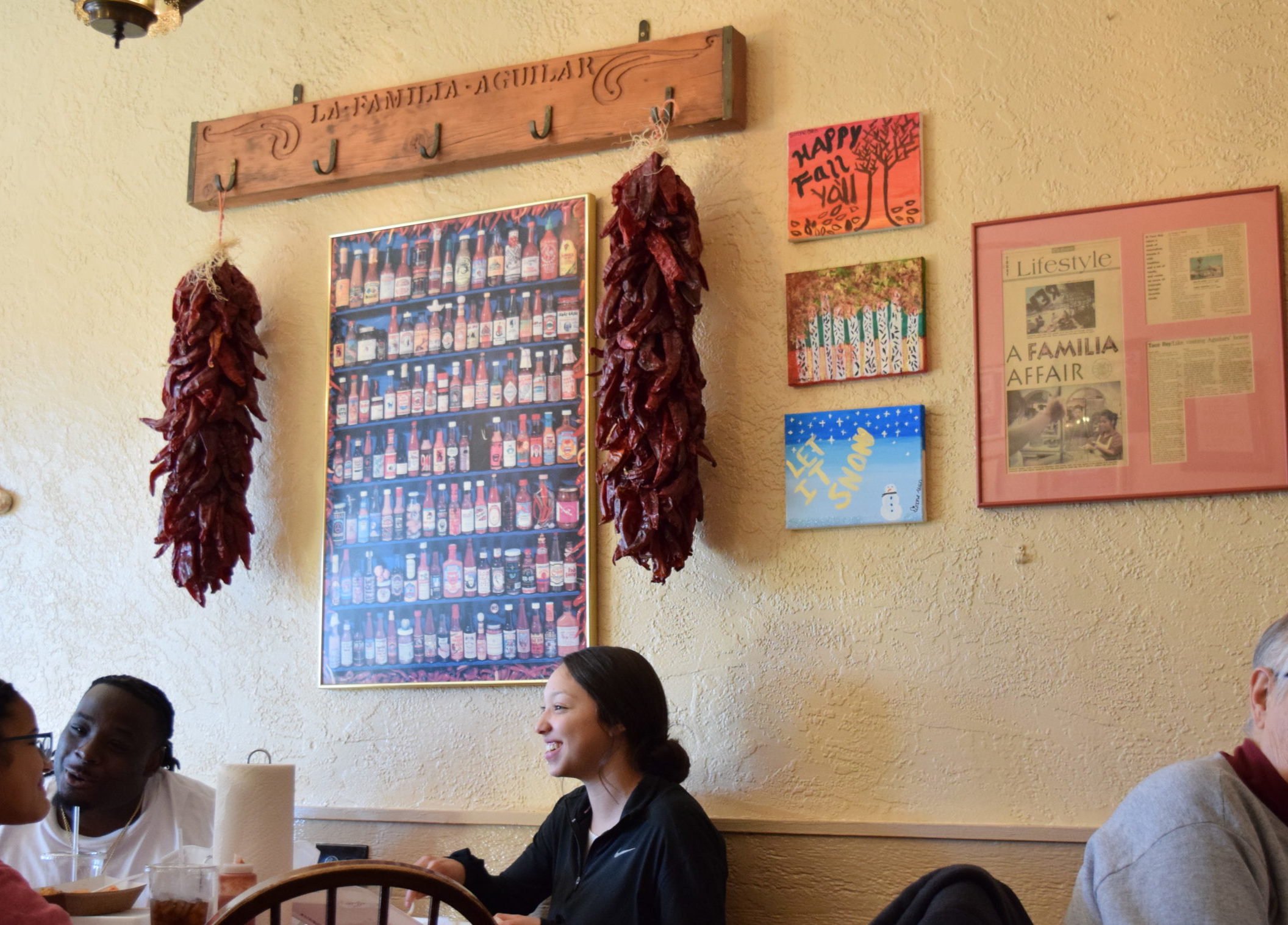 Xandra McMahon/CPR News17-year-old Isabella Allen sits in El Taco Rey in Colorado Springs on March 3, 2020. Her family, the Aguilars, started the restaurant in 1976. 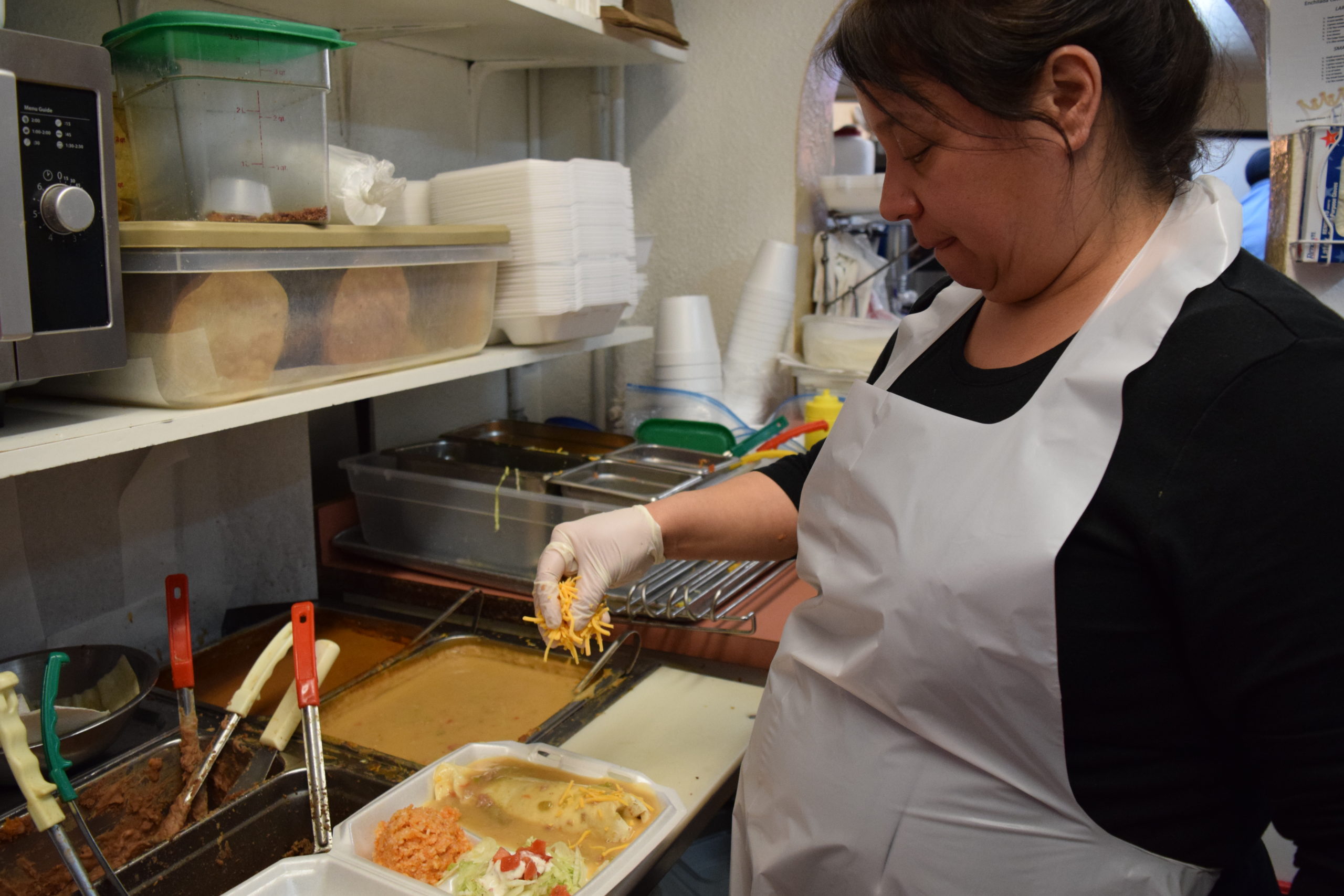 Xandra McMahon/CPR NewsJudy Allen throws some cheese on a smothered burrito in the kitchen at El Taco Rey in Colorado Springs on March 3, 2020. 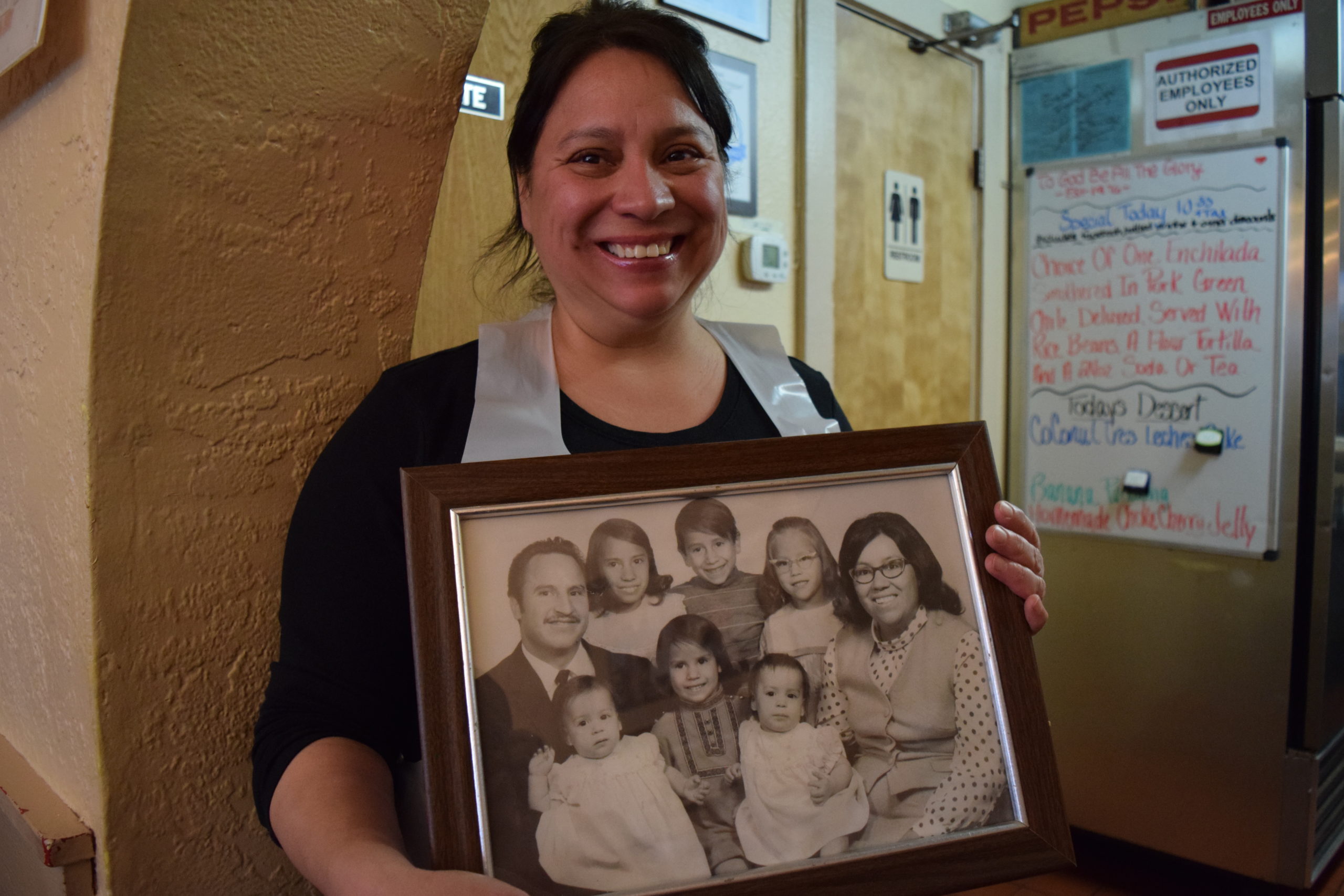 Xandra McMahon/CPR NewsJudy Allen runs El Taco Rey in Colorado Springs with her sisters now. But her parents, Eddie and Rosemary Aguilar started the restaurant with their six kids in 1976. 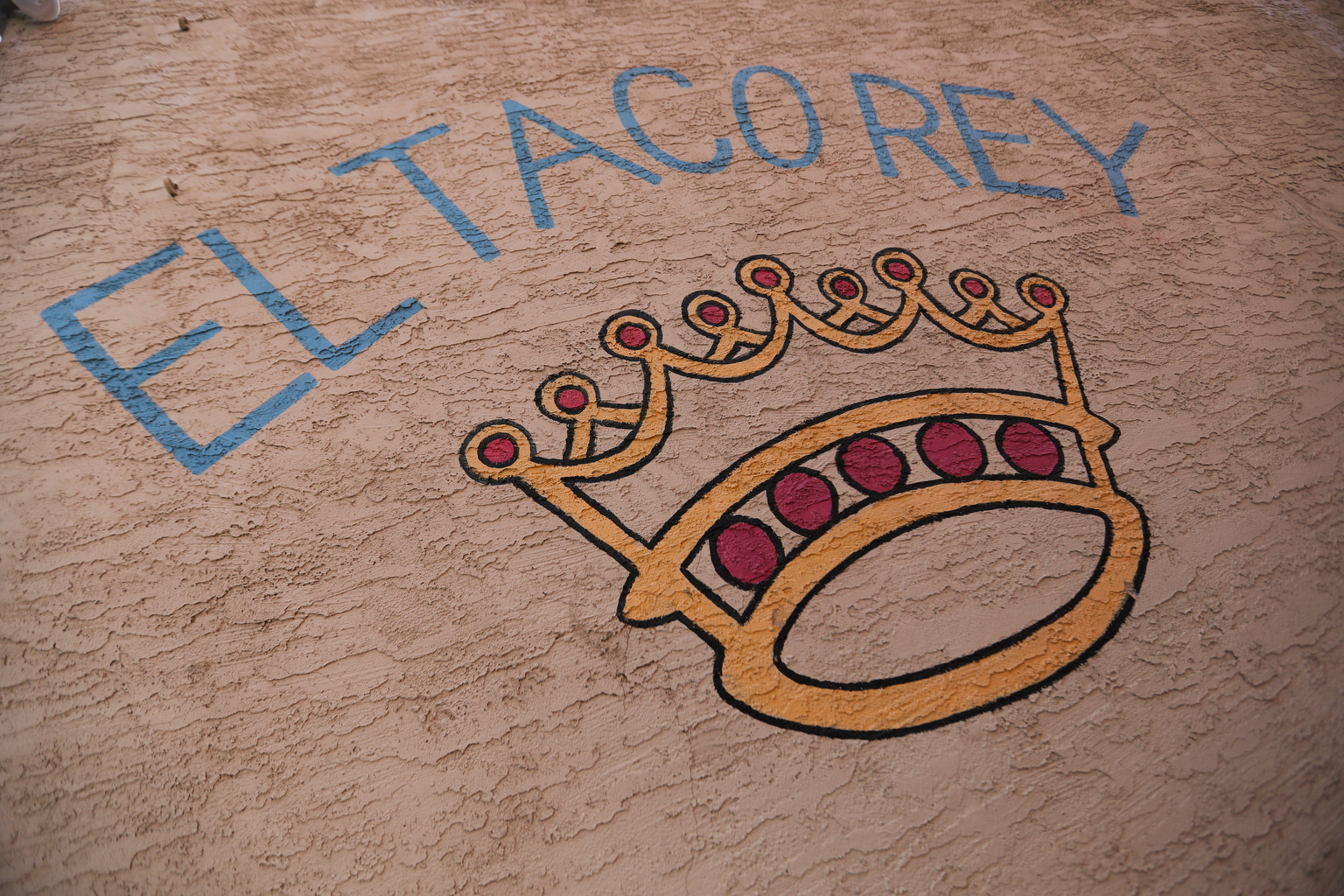 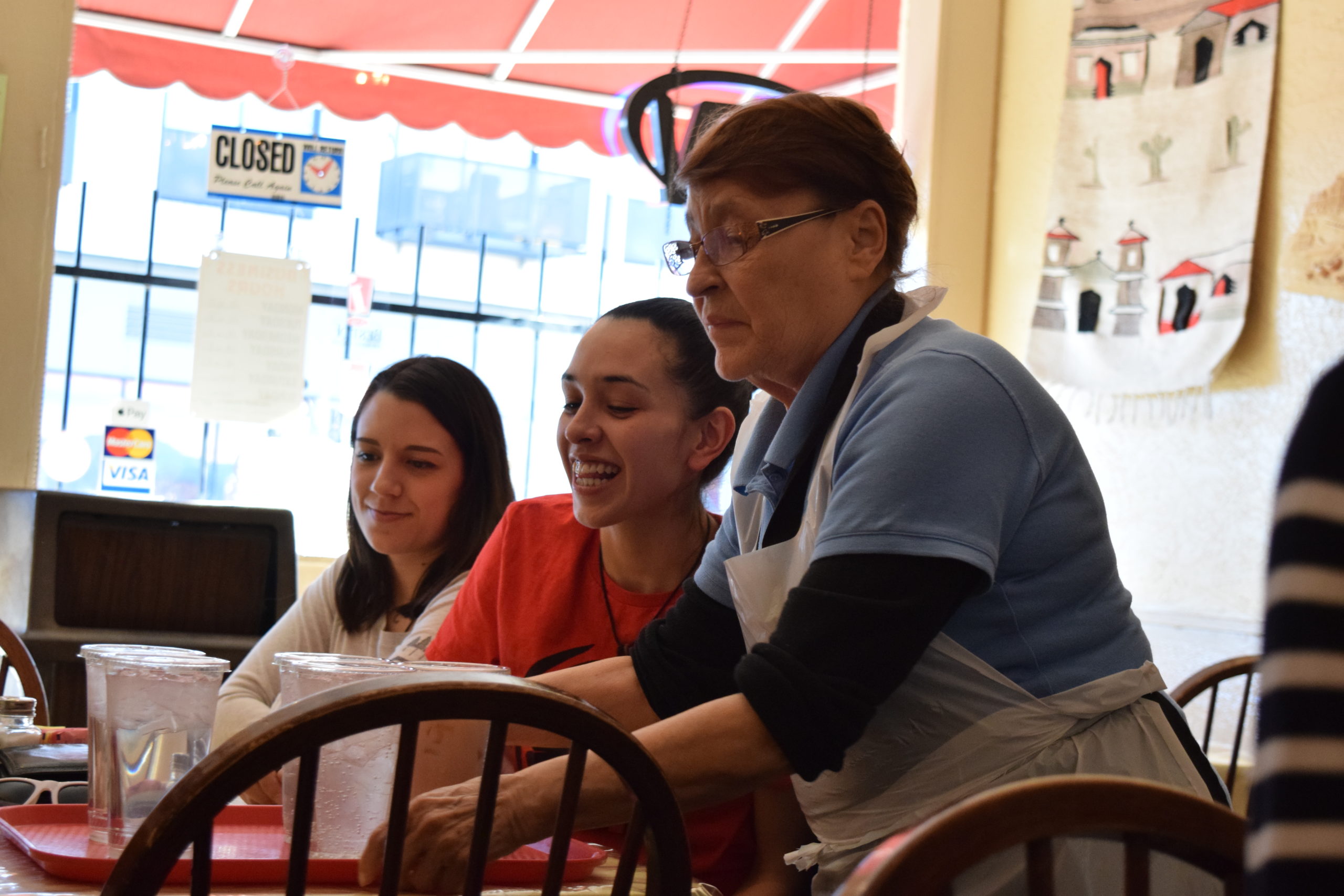 Xandra McMahon/CPR NewsDelia Pacheco delivers some drinks to a table at El Taco Rey in Colorado Springs. Her nieces run the business that has been in the family since 1976.

Allen speaks reverently about the place green chile has in her family and culture. Growing up, they put it on everything, whether it was breakfast or atop mashed potatoes instead of gravy.

The restaurant’s menu hasn’t changed at all since 1976 and that’s because the food served has always just been an extension of the family’s recipes.

“If you come to our house, this is how we do it. This is our take,” Allen said.

It’s a tradition that’s been passed down to future generations. Allen’s own children now work in the restaurant on the side. But Allen said she doesn’t necessarily want her kids to take over El Taco Rey like she did.

“It was a different time back then ... You know, my parents had six kids, couldn't afford to go to college (or) send their kids to college,” she said.

Now, Allen said her kids are definitely going to college if she has anything to say about it.

“They're not at college-age yet, but that's their goal," she said.

Her 17-year-old daughter Isabella works at the restaurant during the summers. When she tells people around town that her family owns El Taco Rey, it’s a bit like being related to celebrities.

“Everyone knows who we are and everyone's always talking to my mom in the store, wherever we go,” she said. “And it's nice, but it's also kind of annoying, because they're like celebrities and we're at dinner and they end up talking to a customer for three hours.”

If you stop in and ask Allen for a recommendation, she’ll tell you everything is good. And she’s right. But her favorite thing on the menu is the chicharrones burrito smothered in their famous green chile.