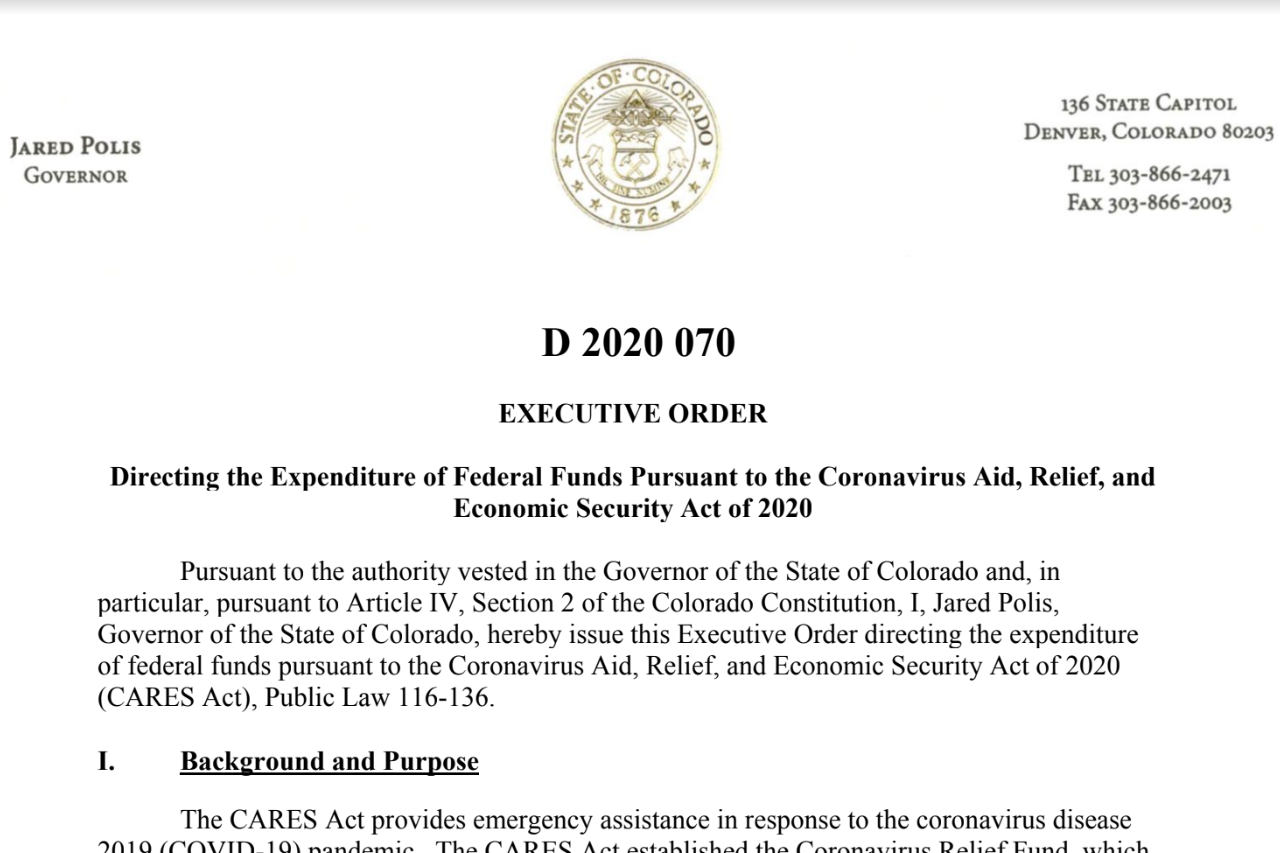 Colorado’s Democratic governor and legislative leaders have laid out their plans to distribute $1.67 billion in federal aid granted through the CARES Act coronavirus recovery bill.

The announcement caught some off-guard, especially after Gov. Jared Polis initially said the legislature would have a say in how the money is dispersed. His executive order on the disbursement was signed on May 18.

Of the money, only $275 million will actually trickle down to local and municipal governments. The rest of the money will be distributed as follows:

“This immediate disbursement ensures that no Coloradan has to go without a hospital bed when they need one, that the state can continue to scale up testing and containment and protect our most vulnerable,” said a statement from the governor.

The legislature’s powerful Joint Budget Committee is currently drafting the state budget — one that has been hobbled by the pandemic. Republican State Sen. Bob Rankin has served on the committee for a number of years and was disappointed by the announcement.

“For the governor to announce this allocation of funds — without so much as consulting the chief budgeting body — is not only a lapse in leadership but has now eliminated the people’s voice over how their money is spent,” he said in a statement.

Now, instead of a discussion on how to divide the federal dollars, the JBC will work through the technical aspects of the CARES money, how it can or cannot be used.

GOP Congressman Scott Tipton added that the $275 million local direct assistance might not be adequate “given some of the challenges that our counties have had.” He had early concerns that dollars for state and local governments would mainly stay at the state level.

“The governor’s executive order needs to be looked at critically by Treasury, and I challenge the governor to explain how money for colleges to ‘increase student retention and completions’ are an allowable use of this money,” he said.

Like the state, several Colorado counties and local governments are looking at budget shortfalls due to the cost of the COVID-19 response and a loss of tax revenues. When it comes to local aid, under the CARES Act, only counties with populations of 500,000 or more got direct local aid.

In total, only five of Colorado’s 64 counties fell into this category. This left a majority of mid-sized and rural communities waiting to see how much financial help they’d receive.

The Colorado Municipal League had been hoping for no less than $400 million to go to local governments, said executive director Kevin Bommer. The organization has worked with the Legislature on a program to disperse the funds to eligible communities for eligible costs.

“Ultimately the governor’s executive order will ensure dollars will get out faster because we don't have to wait for legislation to pass and be signed and all that,” Bommer said. “But obviously, it's an amount that’s a bit less than we were asking for.”

While the announcement gives local leaders a realistic idea of what to expect from the state, it also put pressure on members of the congressional delegation to come through with more federal aid or watch as local governments furlough and layoff employees.

“I think that there will still be significant pressure to have the federal government step forward,” said Democratic Rep. Joe Neguse. His bill for $375 billion in direct local stabilization funds was included in the Heroes Act which has already passed the Democratic-controlled House.

Republican leaders in Congress, however, believe a pause is needed before any additional coronavirus aid is taken up even as the pandemic and its economic disruption continue to wreak havoc across the state. For his part, Colorado Democratic Sen. Michael Bennet wants the federal government to step up and do more for local governments.

“The fact that Leader McConnell is planning for a weeklong Memorial Day break without passing more funding for state and local governments, even as they face drastic cuts to essential services, is unacceptable,” he said.