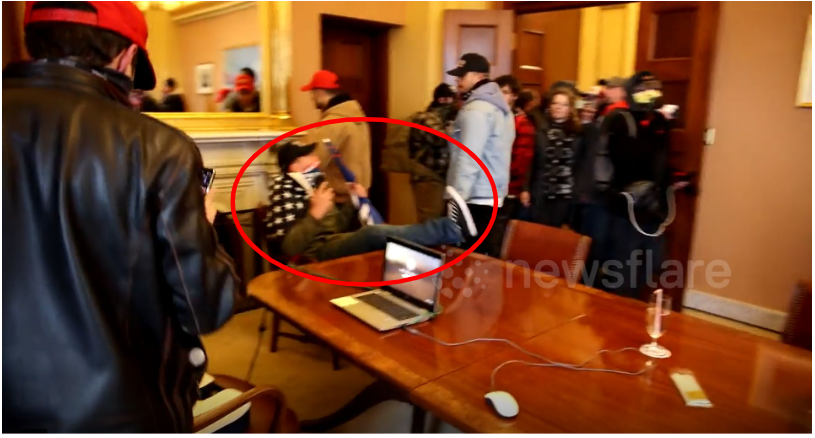 Authorities arrested a man in Denver this week for his alleged involvement in the January 6 U.S. Capitol riot. Several of his actions, including allegedly invading Speaker of the House Nancy Pelosi's office, were caught on video.

Among the videos Hunter Palm turned over to the FBI, one allegedly shows him joining a crowd on the way to Pelosi's office. Near him, someone can be heard saying, "We're gonna kill her." As they reach the door of her office, another shouts, "Come on you (expletive) Pelosi, get the (expletive) outta here.”

Once inside the Speaker's conference room, Palm approaches a locked laptop, asking people around him, "who's good at hacking? Who's good at hacking?" Photos from others in the crowd show him sitting with his feet up on the conference table, wrapped in a version of the American flag. The video captures him saying, "I think I like my new dining table. I pay for it."

These Are The Coloradans Allegedly Involved In Storming The U.S. Capitol On January 6

According to the arrest warrant, one of Palm's relatives contacted the FBI two days after the insurrection to report that he had told them about entering the US Capitol and walking around during the riot. When questioned on February 6th, with his lawyer present, Palm allegedly said he was pushed into the building -- but security footage shows him walking in freely.

While the warrant contains a detailed description of Palm's alleged actions during the capitol riot, it does not provide much information about who he is. He was arrested in Denver on May 12, the eighth Coloradan to be charged for participating in the breach of the Capitol.