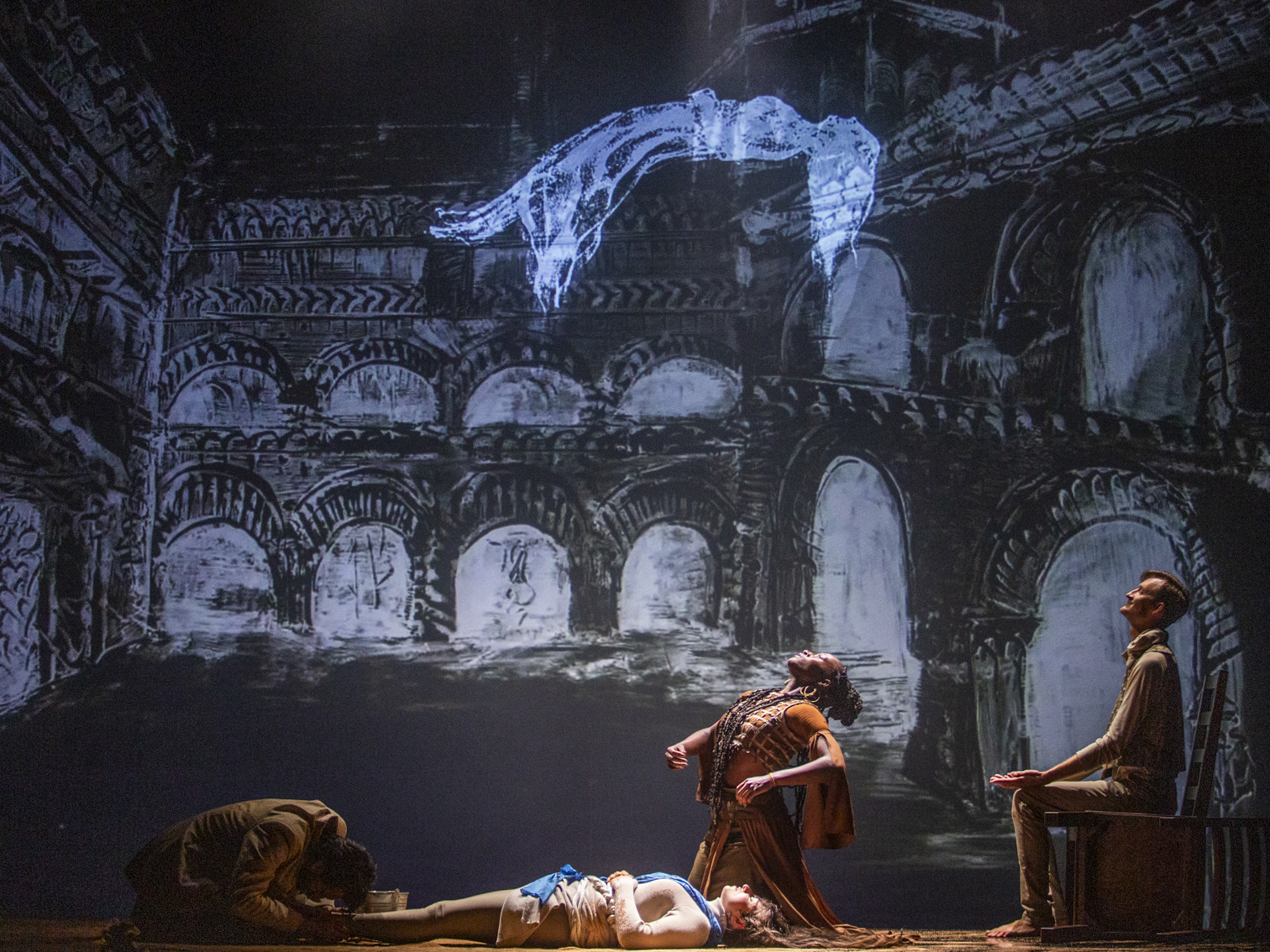 Classical singer Karim Sulayman adores Western European music from the 16th and 17th centuries. But this Lebanese American tenor is aware that much of this music demonizes and stereotypes Arabs and Muslims. So in a new stage work called Unholy Wars, he reframes those stories through an Arab American lens.

Unholy Wars is a singular piece. It brings together dance (with dancer Coral Dolphin), theater, visual art and, of course, music both old and new, with a cast of three singers — soprano Raha Mirzadegan and bass-baritone John Taylor Ward, along with Sulayman.

The piece opens with the Gloria Patri from Claudio Monteverdi's Vespers of 1610. "It's this echoing of two tenors, and I sing both tenor lines in it," the Grammy Award-winning Sulayman explains.

Many of the artists who worked with Sulayman on this project also have roots in the Middle East, including composer Mary Kouyoumdjian, who wrote the new music that weaves in and out between the baroque selections.

Kouyoumdjian says she wants audiences to understand that even as a composer of today, her musical reference points extend back millennia — much older than the music of Monteverdi and Handel in Unholy Wars, which by comparison go back only about 300 and 400 years.

"I think this is something that comes very naturally to myself and to a lot of the cast members," she says. "I took piano lessons and learned [Frédéric] Chopin before I learned Middle Eastern folk. But this idea of folk music has been very ingrained in us, even without our knowing. So putting these elements together felt very natural — here is European music, but also here is some music that has lived even longer. You know for thousands of years Middle Eastern folk has been a thing on our planet."

Unholy Wars premiered last month at Spoleto Festival USA in Charleston, S.C. Its general director, Mena Mark Hanna, says the piece braids together not just many eras, but many ways of seeing. "What Karim is doing is extremely intelligent because he is creating a longer narrative between all of these different works," he enthuses. "It's like period music plus liquid movement plus graphic novel."

The centerpiece of Unholy Wars is a piece by Monteverdi, Il combattimento di Tancredi e Clorinda. Drawn from a text by Torquato Tasso, it depicts the fictional, Crusades-set story of Tancredi, a Christian soldier, who has fallen in love with Clorinda, a Muslim woman who has gone into battle disguised as a man. In the end, they fight each other, and Tancredi mortally wounds her. He finally raises her helmet and realizes whom he has hurt. Not only does Clorinda forgive him — in her dying moments, she asks him to baptize her as a Christian.

"Yes, there's this very strange thing that happens at the end of Combattimento," Sulayman observes, "where Clorinda, after this bloody fight where they — these two people — believe so strongly in their religion and their God that they are willing to die for it — which we see today all the time — at the end of it, while she's basically choking on her own blood, she is able to say, 'OK, you were right, baptize me. It's all fine.'"

"I think that Tasso was trying to make this story more palatable to his Italian Catholic readers in the 16th century," Sulayman says, "that, of course, this Muslim would ask for this baptism. But as we read it now in the modern world, we say, 'Oh, that's so messed up.' But it's still an incredible and important piece of music. So instead of never doing it again, we want to lean into the issues of it and look at it with a really critical eye."

Unholy Wars director Kevin Newbury says that at this moment, there's an impulse to toss such problematic material aside. But that's not what this team did.

"As artists, our job is to reflect our cultural moment and the world around us and interrogate the material that we're putting onstage or on screen," Newbury says. "It doesn't mean that we throw everything away. We're in this moment of cancel culture, where anything that's problematic is kind of taken off the boards or off-screen, as if we just can't present that anymore. But what if we look at that material through a new lens?"

Sulayman says that he has no interest in being didactic. "You never want to be too prescriptive with these things. I clearly have a point of view, and I have a point of what I'm trying to say, but some people don't want to come to the theater for that — some people want to just enjoy really great music. And I kind of want to explore gray area anyway."

"Hopefully," Sulayman continues, "people will leave the theater talking about it, wondering about it, reading up on the Crusades, reading up on our foreign policy now in the Middle East. But some people will also come in and say, 'I've never heard 17th century Italian baroque music before, and I think it's amazing.' That's also something important and valid."

Onstage, the work is intimate and elemental. The props are simple: chairs, a rope, buckets of water and soil to suggest borders. The animated projections made by visual artist Kevork Mourad evoke Armenian manuscripts, Arabic calligraphy and the architecture of his native Aleppo, Syria.

"For me," Mourad says, "it's only natural to capture the imagery from my childhood and bring it into this piece and somehow have a communication with the Western audience. I'm continuously trying to capture and somehow document what was lost there."

The simplicity of the set works both logistically and aesthetically. For one thing, notes Newbury, it makes future stagings cost-efficient, despite the high-tech projectors and sophisticated lighting.

"I like to say the $5 idea and the $5 million idea have to be the same idea," Newbury laughs. "We could tell this story out on the street with the buckets, the dirt, the rope and the water."

Mourad says that those simple elements also evoke both the family histories of several of the participants in Unholy Wars, but also today's refugee crises.

"I want the setting to be anywhere," Mourad says. "So almost like a troubadour or a refugee, we're carrying with us those images like a tent. We could just strike it anywhere we want."

Through all these elements, Unholy Wars becomes a very current contemplation on intergenerational trauma, belief and self-identity. The creative team hopes that they will soon be able to take their theatrical meditation to audiences across the U.S.

With special thanks to South Carolina Public Radio, who recorded the music for Unholy Wars at Spoleto Festival USA.