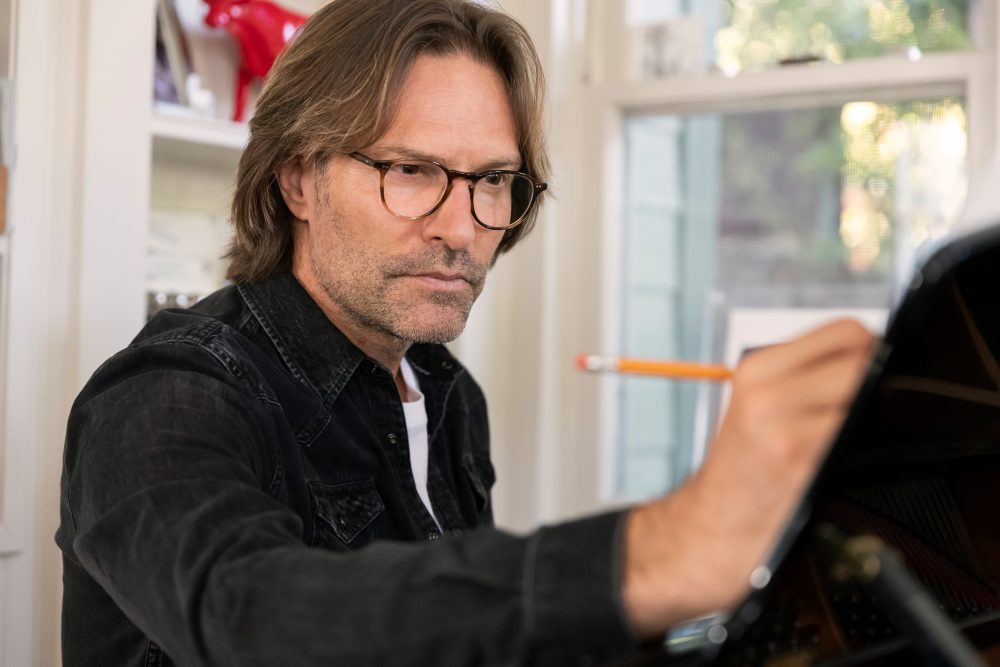 Mark Royce/Courtesy of the Colburn School

There’s no predictable timeline for processing grief. For poet Charles Anthony Silvestri, it took 10 years to express the loss of his wife and the encouragement of his dear friend, composer Eric Whitacre. Silvestri’s feelings finally emerged as the “The Sacred Veil,” an intensely personal hour of healing meditation for choir, piano and cello. Whitacre’s music, set to Silvestri’s words, premiered in 2018 in Los Angeles. Now, Whitacre and Silvestri are set to premiere a much larger redux of "The Sacred Veil" in Denver October 8.

“I don’t remember a time when we weren’t best friends,” Whitacre told CPR Classical. The two Nevada-born men met 31 years ago in a college choir. “We began writing together, he as poet, me as composer, over 20 years ago.” Their first joint piece was “Lux Aurumque” in 2000. Their collaborations have become international choral standards, like “Sleep” and “Leonardo Dreams of His Flying Machine.”

“The Sacred Veil” is their largest work to date. Silvestri’s wife, Julia Lawrence Silvestri, died from ovarian cancer in 2005, leaving behind the poet and two small children. The loss of his life partner was devastating.

“After many, many conversations, I was encouraging him to write about it,” said Whitacre. “I didn’t know if that would be the right answer, but as a sort of way to get it out of his body and onto the page, maybe give some sort of sense of relief or catharsis.”

Whitacre said 10 years later, Silvestri left a single poem sitting on his piano, which eventually became the first movement of “The Sacred Veil.”

Whenever there is birth or death,
The sacred veil between the worlds
Grows thin and opens slightly up
Just long enough for Love to slip,

Anthony Charles Silvestri, "The Veil Opens" from "The Sacred Veil"

“What I had to come to grips with when Eric and I decided to explore this idea in multiple movements, was that I finally, as a poet, had to go to those dark places,” said Silvestri in an interview from 2020. “I had to revisit the moment of Julie’s death. I had to revisit the joy of our love together.”

In the interview, he said the process also helped Whitacre grieve her death. “Eric was exploring sonic worlds unlike any of his other compositions, and was almost pushed into a totally new landscape, inventing a kind of new language to express these thoughts and these words of mine.”

“The Sacred Veil” shares deeply intimate moments in the Silvestris’ lives. Their love story, the conception of their child, her diagnosis, her battle with cancer and her eventual passing are all shared through 12 movements.

“We had no idea that we were kind of opening the door to a much more common experience than we had thought,” Whitacre said to CPR Classical. After its premiere, the pair heard from audience members and musicians that were touched by Julie’s story. “Within the grief, what we heard over and over was people were thanking us, saying ‘Thank you for saying out loud what never gets said out loud.’”

The Denver-based choral group Kantorei premieres a new rendition of “The Sacred Veil” on October 8 and 9, adding orchestral strings and a larger chorus, a change from the originally intimate setting. “There are many moments in the piece that want to be bigger, they need to be bigger,” said Whitacre. “We’re on the edge of the human experience and they require a sort of gravity to them.”

Whitacre will hear his new arrangement for the first time in this Denver performance, which he intends to be “lush and sweeter, and hopefully is doing justice to this beautiful story.”

Both Silvestri and Whitacre will speak about “The Sacred Veil” from the stage before each performance, October 8 at 7:30 p.m. and October 9 at 2 p.m.

Hear CPR Classical by clicking “Listen Live” at the top of this website, or download the Colorado Public Radio app. Listen on your radio to CPR Classical at 88.1 FM in Denver, or on radio signals around Colorado. You can also tell your smart speaker to “Play CPR Classical."