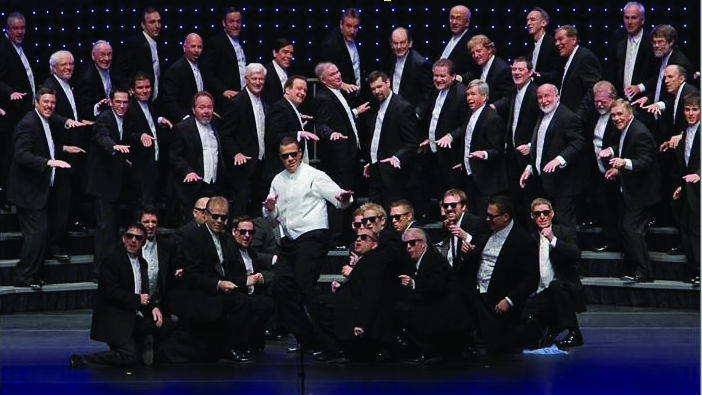 These were the trappings of barbershop quartets during the musical genre’s heyday back in the early 1900s.

This weekend, more than 200 barbershop singers from around Colorado will harmonize together at a one-night event at Boulder’s Chautauqua Auditorium.

The event features award-winning Colorado vocal quartets and ensembles such as Denver’s Sound of the Rockies chorus, Longmont Long’s Peak Chorus, the High Country Women’s Chorus of Wheat Ridge and the Buffoons from the University of Colorado Boulder.

Barbershop is a style of a cappella singing -- that’s vocal music unaccompanied by instruments. The genre is mostly, though not exclusively, associated with men’s voices.

It grew out of the social settings that sprang up in and around American barbershops towards the end of the 19th century. Men would harmonize folk and popular songs as they waited to have their hair trimmed.

Presently, it’s rare to encounter a barbershop tune while flipping through mainstream radio stations in Colorado. But the musical style has a notable foothold in the state.

About 500 Coloradans are members of the Barbershop Harmony Society (BHS), a national institution devoted to the promotion and preservation of barbershop music. Fourteen Colorado choruses and 30 to 40 quartets are registered with the organization.

Allan Barker, director of the Boulder Timberliners, has been singing barbershop music since he was 17. He says Chautauqua is the “big daddy of them all” when it comes to barbershop performances.

“Chautauqua is to barbershop what Cheyenne is to rodeo,” Barker says of the festival’s 65-year run at the venue.

Barker says a main objective of the Timberliners is to preserve the art form’s traditions.

But the music has evolved as troupes start to experiment with blending in other a cappella styles like doo-wop, and reimagining popular songs -- such as Pharrell’s “Happy” or Michael Jackson’s “Thriller” -- as barbershop tunes.

“At its heart, it’s about singing for pleasure and hearing your voice blend with others,” Lynch says.

For the festival’s finale, all 200-plus barbershoppers take the stage and join in singing together.

“It rattles the rafters,” Barker says.

140822_e_seg_hellomarylou - Premium Blend
Tune into the Colorado Art Report Friday at 10:30 a.m. and 7:30 p.m. to hear Premium Blend or listen online at any time.
CPR thanks our sponsors.Become a sponsor