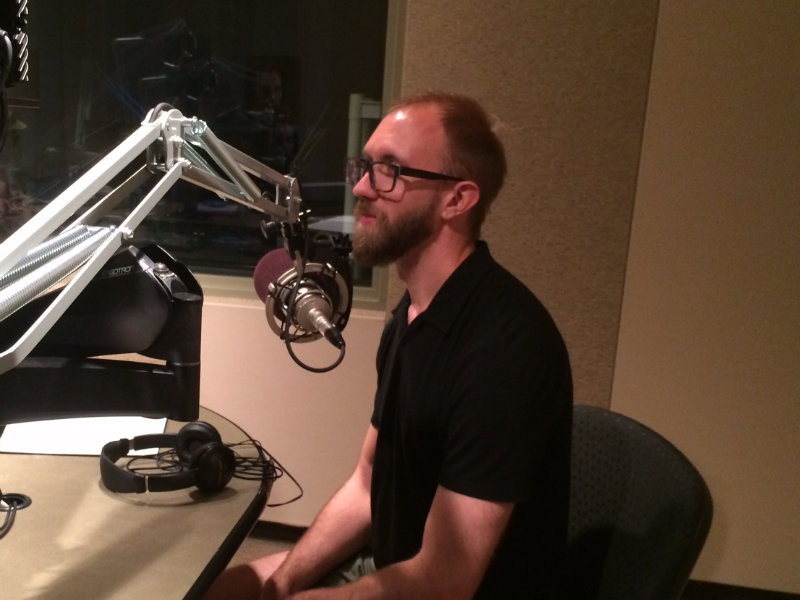 (Photo: CPR/Brad Turner)Denver composer Nathan Hall finds inspiration in unlikely places. He’s written music to be performed in cemeteries and is writing a piece based on knitting and sewing books.

For his latest choral work, "I Am In Love With the World," Hall turned to an unusual source: a transcription of a 2011 public radio interview with Maurice Sendak, author of the children’s book “Where the Wild Things Are.”

Shortly before his death, Sendak appeared on NPR’s “Fresh Air” to discuss his book, “Bumble-Ardy,” with host Terry Gross. The conversation quickly turned into a series of reflections on death, grief and gratitude.

The interview inspired several tributes (like this one from a New York Times cartoonist). And it moved Hall’s friend Keith Hampton, a singer/songwriter. Hampton transcribed Sendak’s words and shared them with Hall, who went to work arranging Sendak’s words for a choral group.

“We decided we needed the force of a full choir behind it,” Hall tells "Colorado Matters" host Ryan Warner. “Sometimes it feels like he’s about to break down and cry. Sometimes it feels like he’s really steadfast in his beliefs and he’s telling Terry Gross, ‘These are the life lessons that I’ve had for all these years and I’m going to impart them to you before I go.'"

Choirs in Baltimore and San Francisco premiered the music last month. Throughout the piece, come Sendak’s musings -- “live your life," “we could listen to music" -- with repeats over soaring piano chords.

Hall sought out gay, lesbian and allied choirs to perform the piece, in part, because Sendak was gay.

“I thought, you know, should he have lived a little later in the century maybe he would have had a different life,” Hall said. “I thought actually the perfect opportunity for this would be gay, lesbian or allied choirs who know the feeling of wanting to be accepted in your life, feeling different. So I basically emailed every gay and lesbian choir in America hoping to get a response, and I got a couple great ones.”

Gross told The Current she felt “very moved” upon learning Hall used one of her interviews as the basis for a piece of music.

Hall says he’s working to arrange a Colorado premiere for “I Am in Love With the World.”