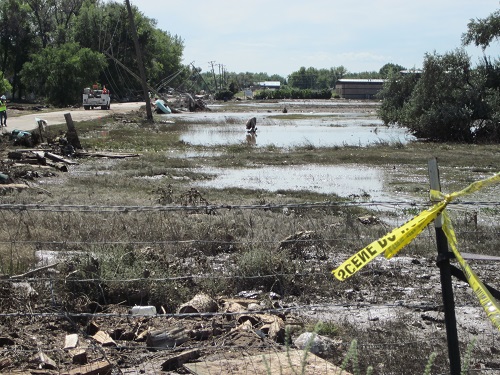 (Photo: AP/CPR/Nathaniel Minor)At 4 AM last Thursday, there was a knock at Augustina Temu’s front door. She wasn’t home. She was working at Walmart where she's a janitor. But, the pounding woke her four-year-old son and her husband, who is in the country illegally.

"He was afraid to open the door because he thought that was ICE that was coming for him," said Temu.

It wasn’t Immigration and Customs Enforcement. It was the Longmont police, evacuating the area. The St. Vrain River was creeping dangerously close. Officials rapped on the door for over an hour. Eventually, Temu’s husband relented. He was the last person to evacuate Royal Mobile Park.

That community is devastated. For days, bulldozers have been hauling away shards of wood, saturated furniture, and random debris. The area is blocked off with fluorescent orange tape labeled "danger zone." National Guard soldiers line the perimeter to keep outsiders from entering. It was almost a week before Temu was allowed in to assess the damage to her home, which she says was destroyed.

“We don’t have a stable place to stay. Sometimes we are in the shelter and sometimes with friends," said Temu.

Her economic situation is tenuous. She is originally from Guatemala and recently became a U.S. citizen. Her husband, however, is from Mexico, and he doesn’t have documents for legal employment. He works on a nearby vegetable farm, but his boss says layoffs are imminent because this season’s crop is ruined.

About an hour away, in Evans, the Sanchez family lost their home, a car, and photos. But, that’s not all they lost.

Maria Gonzalez Sanchez says key documents were destroyed. The family lost the U.S. birth certificate for her 10-year-old son, the paperwork for their 20-year-old daughter’s deferred action status, and Mexican birth certificates. They also lost the proof of purchase for the trailer home they just bought with their life savings.

Maria’s husband, Jose Vasquez Gonzalez, says they were away from home when the flood hit. By the time they got back it was too late to salvage anything but the clothes on their backs.

The lost documents could have tragic implications.

Kim Baker-Medina is an immigration lawyer in Fort Collins. She says both Maria and Jose could be on a path to citizenship if current immigration proposals become law.

"This would be a family that would obviously qualify for immigration," Medina said. "They’ve been here for many years. They have a U.S citizen family member. They’ve paid their taxes. They haven’t committed crimes. But, they’re going to need to document their presence in the United States. They’re going to need bills, proof of money sent to Mexico, proof money earned here. They’ve lost all of that."

Immigrant advocates think hundreds, or maybe thousands, of people could be in the same situation as the Sanchez family.

Both the Sanchez family and Augustina Temu’s family hope to receive federal aid. They qualify for it because at least one member from each family has legal status in the country.

Jerry DeFelice with FEMA encourages everyone to apply for aid, regardless of status.

"Even if a family does not have documentation showing that their citizenship for the United States, they may still receive some sort of assistance," DeFelice said.

He says the FEMA will protect the privacy of all flood victims, but immigrant advocates say many people are still afraid to talk to federal officials.