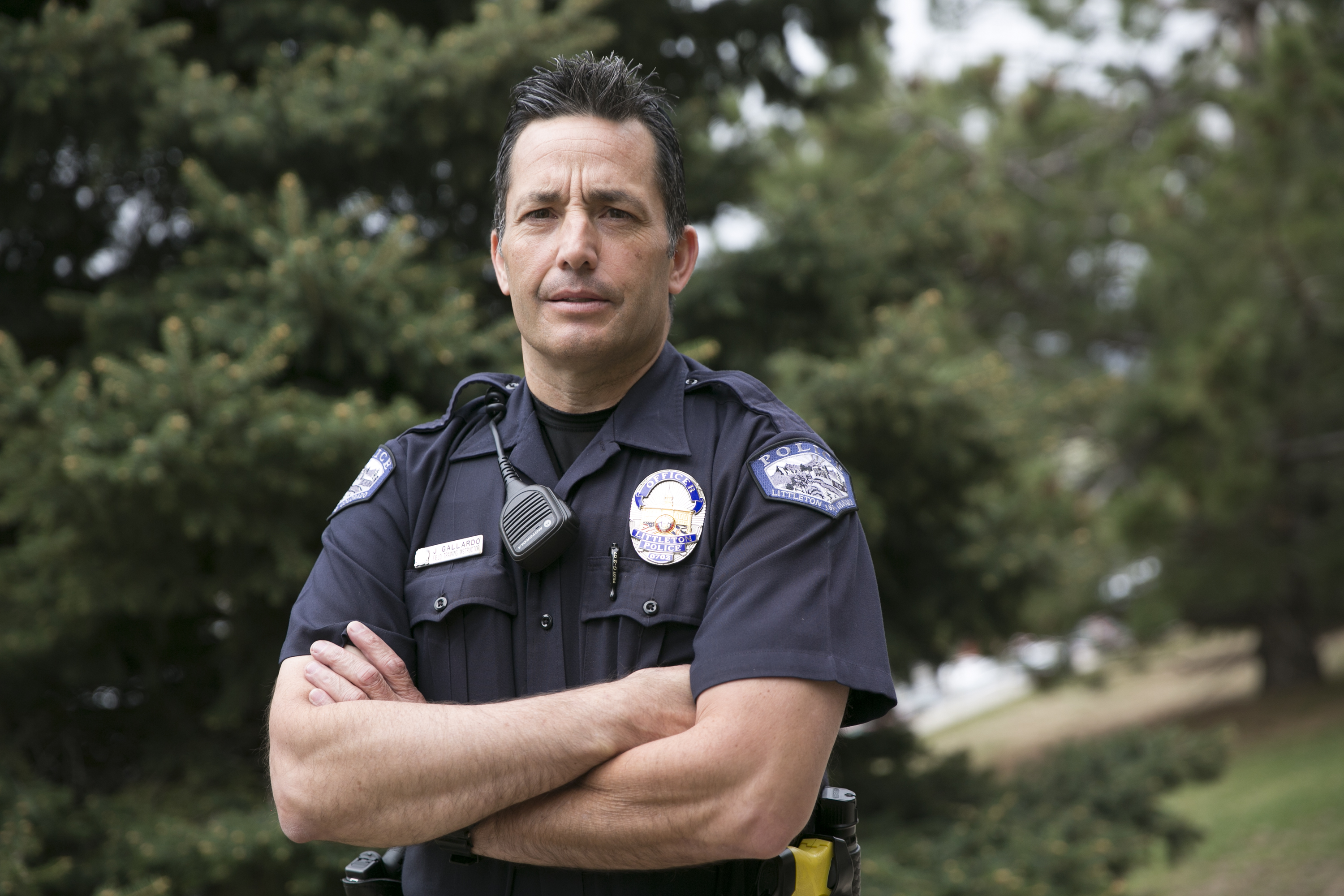 Hart Van Denburg/CPR NewsPolice officers who work in schools are on the front lines in the battle to protect students from tragedies like school shootings. Earlier this month, state lawmakers approved millions of dollars in additional funding for school safety, including more officer training.  Officer Jason Gallardo, who works at Littleton High School, spoke with Colorado Matters about his experiences in these times of heightened fears.

Like others in similar positions, his job is officially called a School Resource Officer, and his work extends past what one might think of as traditional police work. Social media is a constant issue. Some students are  struggling emotionally -- one wrecked the baseball shed. There was a time when another left campus and no one knew where she was.

And then there’s safety for the students and staff: Safe2Tell, the anonymous tip line established after the Columbine shooting, saw a 157 percent increase in contacts in February compared to the same month last year. Students at LHS constantly use it, Gallardo  said, and while not every tip leads to an actionable issue, serious threats and suicide calls are really common. All are investigated.

Gallardo on the increase in Safe2Tell tips:

"Well certainly it's something that we deal with a lot, and it takes a lot of our time. However, it's definitely a solid program. It's a great way for people to anonymously report that they think maybe a friend or even a parent or a fellow student is suffering some type of hardship. They may need just immediate intervention. It's completely anonymous that is very protected. Even we in law enforcement can't get that information of who made that call. So I think it really gives the kids a safe way to feel like they can report something that maybe before Safe to Tell, they wouldn't have been comfortable coming out and saying, "Hey, this person is either suicidal or mentioning suicidal thoughts on social media." So it's been a great program. Of course, it has a little, sometimes it's not used as it's intended to use. But more than not, it's an outstanding program. It's something that really brings these problems directly to us, and we can jump on top of them immediately and address them."

On how he and staff respond to potential violence including shootings:

"If we get anything that even looks like it's possibly a threat against the school or the district in any way, we'll immediately gather a team, which includes the school, includes people in law enforcement, my supervisors, and really attack that problem and reach out to that person. You know, most of the time it's unintentional. These kids don't sometimes think about what they're putting out there on social media, in terms of the photos and the pictures they're taking. It can range from, "Oh I accidentally put a picture of a paintball gun on there," to anything else. We just quickly investigate it. We make sure there's no threat. If  we feel like there is a threat, then of course we would go into a threat assessment and things of that nature. Then we, immediately we're required to get back with the people at Safe to Tell and give them a disposition as to that investigation. "

On the challenge of social media:

"Social media has really changed their lives, and put all of their personal issues that we might have had when we were in school, that one or two people may have known about these  personal issues we were going through, now everybody knows. Now, it's on every Snapchat story. Now it's out there on Facebook. You could have one minor slip-up, or embarrassment as a student, and boy now, you know, four, five, six hundred people are seeing it, even at other schools, and then that can create some real emotional challenges for a kid when they do have a minor slip-up. There's such an audience there to really either, you know, make fun of that incident or really harp on a kid for something that back in our day would have just been over within a day. So really just trying to gain those skills to interact with these kids and help them through some of this stuff."

On how often he fears a shooting:

"Well you know to be honest with you, it's something I think about daily because I want to be mentally, physically, tactically prepared when that day happens. Again, going back to those personal relationships. By the time that day comes where someone wants to perpetrate that kind of horrible act, we're the response at that point. But I need to be part of the response at the front end of that. That person typically didn't manifest that thought on that very day. That thought came months, years before. That's where we need to, as great as the money is for security, we need to dump every dollar equally into putting more teachers in these schools. Some of these teachers are dealing with 38, 40 kids in a classroom. If that could  come down to 20, 24, it would just increase the opportunity to make those personal relationships. Maybe you intervene in that potential shooter's life years before that ever happens. This school shooting change to get this to stop, it's gonna be an evolution, not a revolution. It's gonna take some time."

On the change from working patrol for 10 years:

"Well, I'm a 1989 graduate of Littleton High School, which is ironic. Almost thirty years later I'm back at that school. So it's really home for me. I'm born and raised in Littleton so I have really deep roots in this community. And right out of college and high school, I did work at the YMCA with teen groups back in my early 20s, and we were kind of winging things back then. So I always knew that I kind of had a heart for kids, and it's something that I definitely wanted to do, and the timing was just perfect for me.

[...]The one thing, and my wife will tell you, I come home every day from work and she says  “You're much happier than you were coming home from those patrol shifts.” So I feel it, I see it. Even though you deal with a lot of problems in the school, boy, the kids they can put a smile on your face instantly whether they're dropping something by your office, they thought about you while they were at lunch and wanted to bring you something to eat. So it's a real positive interaction every day as opposed to patrol where you know you have so many of those negative interactions out on the streets. It's really an  uplifting position to work in the school."