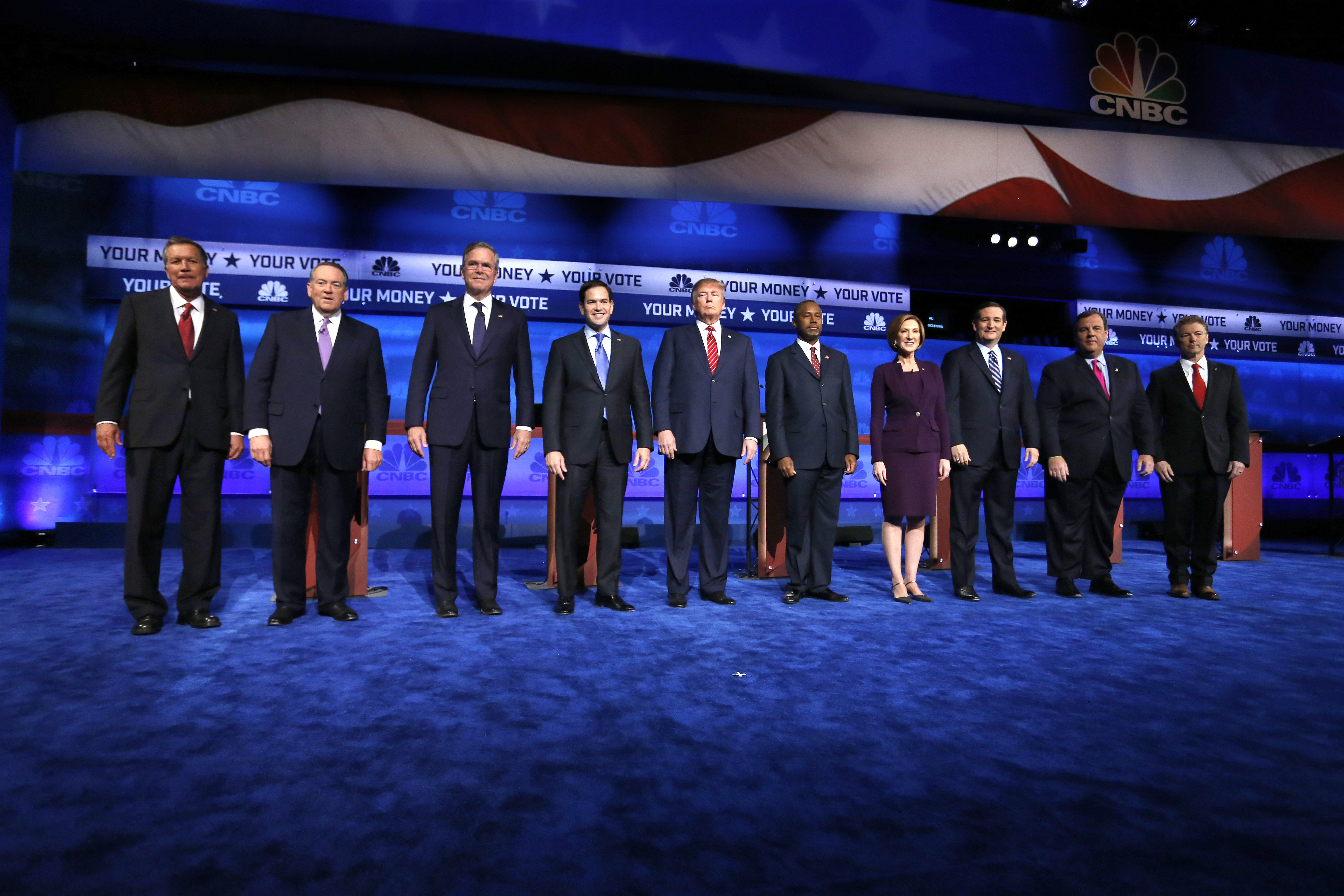 (AP Photo/Brennan Linsley)On Wednesday night, Republicans who want to be president made themselves heard in Boulder. Colorado Matters brought together three Colorado voters to watch the debate and share their thoughts later with host Ryan Warner in a round table discussion.

All three are conservative Latinos who are solidly in the GOP camp. Latinos make up about 14 percent of the state's potential voters. Their vote in 2016 could be significant in a swing state like Colorado where historically more Latinos vote Democratic. That's why CPR decided to host a GOP presidential debate watch party with these three guests:

Eddie Espinosa, whose family ties date back to the 1800s in the San Luis Valley, owns an IT company. He says he passed up hosting a debate party to join the CPR discussion.

Pauline Olvera, who works in finance, is active in the Republican Party. She ran an unsuccessful bid for the statehouse a few years ago. Her grandparents came from Mexico and Olvera says she grew up in a very conservative home.

Enrico "Rico" Figueroa lives in Adams County. He served for a time on his local school board and works for a non-profit. His great grandfather came from Mexico; his father was the first to graduate from college.

Edited highlights from the conversation are below. Click on the audio link above to hear the full conversation.

On shrinking the size of government, cutting taxes, and growing the economy:

"Kasich said at one point, 'Well, things can't really be changed. We have to get realistic here.' A couple of others hinted at little things like that. OK. Do they really believe in less regulation? Are we really going to get somebody up there who puts their actions where their words were and actually gets it done? This is talked about every election and it never happens."

"Now, can the government do things to assist the goods and services people out there, so that it's less hindering on them -- and they can grow the economy? Yes. By what means? Well, we just talked about corporate tax. Maybe by reducing that we'll stimulate more companies. [...]

"But we shouldn't be looking to the President of the United States, and I get very upset when President Obama is being slapped on the back because the Dow is going up. It's not him. It's the goods and services provided by the private sector. That's what is driving up the stock market."

Pauline Olvera: "I would like them to talk more about how that happens. For example, when you lower the corporate tax rate, corporations will come back to America for those lower taxes.

"When they come back, they're going to hire Americans. When Americans have a paycheck, then they'll have more money in their pockets. They'll be able to spend that money on their families, pay their mortgage. When they are buying goods for their families, when they're getting ready to send their kids to school, they're spending money, they're paying sales tax.

"They're also bringing in an income, which means they're going to be paying more in state income tax as well as federal income tax. So when you lower the tax rates, you actually generate more revenue."

On the immigration issue and building a longer wall along the border:

Espinosa: "You're not really addressing the problem other than building a wall. I think it sends a message out: Is that all you have for the plan? There's no real follow up to that. What will happen other than, 'The good people will be able to stay and the bad people -- I'm going to put you out of here.'? No. I think there's nothing with that. There's no substance there at all."

Figueroa: "The wall? That's great. But what are you going to do with the kids who came over here when they were 1 or 2 [years old], who have been through our school systems -- what are you going to do with them? I haven't heard anyone give a detailed plan on how you're going to work with those kids. Because they want to know. They're working hard right now trying to make a living. What do they do? They don't know."

On the tone of the debate and the question of media bias:

Olvera: "I do see a bias in the media, unfortunately, and I do think Marco Rubio hit it on the head when he pointed out the media coverage that Hillary Clinton was getting. I saw a lot of problems with what she did. I saw these emails [about Benghazi] on her own words saying that she knew this was a terrorist attack and the media comes out and says, 'Oh, Hillary Clinton shined.' I couldn't understand where they got that from. So I was glad that was called out. [...]

"The moderators are pressing and pressing and pressing our candidates for detailed specifics. They were on [Ben] Carson and his plans. They were on Carly Fiorina and her position as CEO [of Hewlett Packard]. When I was watching the democrat debate, they weren't pressing Bernie [Sanders] where he was going to come up with all this free tuition. They just let him say it. So I do see a media bias, and I'm really glad that our candidates are calling them out on it."

Figueroa: "I think as conservatives in general we feel put down, called names by the media, and I think we see the candidates taking the same heat. We want them to represent us, but then we hear some of the questions coming from the moderators, and immediately you can even hear the crowd go 'Ooooooh, how could you ask such a blatantly biased question or even questions with character attacks.'

"[...] It's kind of that David and Goliath type moment where we're going to stand up for ourselves. They're bigger than we are. They might be controlling this thing, but we're going to shine through this thing anyway."

Espinosa: "All of the candidates tonight, they really came together saying, you know what, enough's enough. There is media bias out there -- and it's not just Donald Trump anymore. He brings a lot of it on himself, OK, but it's really, really everybody that is saying that."

On how they felt about the candidates at the end of the debate:

"You'll notice he referenced different people, he came in the middle ground between two of the candidates -- I think between Huckabee and Christie -- and said 'we can do both of your ideas to help reform Social Security and Medicaid.' And then several of the other candidates thanked him or agreed with him. I thought that was very interesting, so I like him even more so. But I will say Fiorina had, I thought, one of the best performances of the night as well."

Olvera is undecided: "I still haven't really made that decision yet. I think all of our candidates had really great ideas. I just can't say that anyone really stood out to me... Jeb Bush is definitely not on my list. Among other things I really didn't like his answer to fantasy football. ... I am a football fan but it wasn't about that. It was about more government involved in our lives and that is what's gotten us to the problems that we have right now."

Espinosa on Ben Carson: "I'm still on Ben's bandwagon here but I was very very impressed with Rand Paul in that he brought something really to light that all of us need to recognize, that we're going to have to raise the age in Medicaid, Social Security. That's just something that's gonna happen."