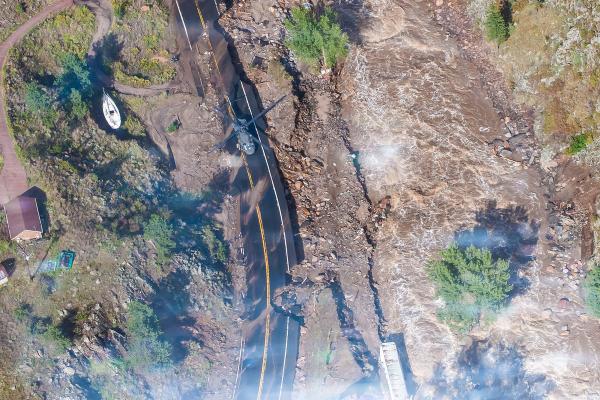 As flooding moves east across Colorado and rains are once again in the forecast, the recovery efforts continue.

Major updates were placed at the top of this post as they came in. Ongoing developments, photos and links, were updated to a Storify which is embedded below.

Update 5:10 p.m. – the latest from Larimer County via Luke Runyon:

Low clouds and heavy rains across the Front Range put rescue operations on pause Sunday, while about a thousand people in Larimer County alone wait to be airlifted to safety.

Many areas of Colorado’s foothills have been completely cut off from road traffic, which makes helicopter the best way to bring supplies and evacuate survivors. That becomes impossible when the weather won’t cooperate.

“It’s the middle of September, and it’s not going to be long in this country before you start getting  frost and you’re going to start having some snow. It’s going to take months and years to rebuild some of these roads,” Del Grosso said.

Some residents whose roads have been cut off have refused emergency help, choosing instead to remain in their isolated homes. Emergency workers are telling homeowners that this might be their best chance to be evacuated. There might not be another chance.

“The longer we wait, the more the environment, the weather and the elements are going to be an issue,” Del Grosso said.

The number of people unaccounted for in Larimer County remains unchanged. As does the death toll, which stands at two people presumed dead.

Update 3:15 p.m. – President Obama spoke with Governor Hickelooper Sunday getting an update on the flooding in Colorado. Earlier on Saturday the President had declared a major disaster in the state and authorized Federal aid.

Obama also directed FEMA’s administrator, Craig Fugate, to head to Colorado to coordinate personally between the government and local authorities. Fugate should arrive Monday. Two Incident Management Teams and three urban search and rescue teams are already in Colorado. Two more are on the way and expected to arrive later Sunday.

Rain continues to fall across areas ravaged by historic floods in Colorado. Communities and residents remain cut off due to washed out roads with limited supplies.

Flash flooding has devastated Highway 34 in the Big Thompson Canyon and that’s essentially cut off residents of Estes Park. Town Spokeswoman Kate Roush says while some sidewalks and roads in evacuated areas may look OK, flooding has eroded ground underneath making them extremely unstable.

“It may be completely invisible to you as you walk onto a sidewalk or you go on to a road it looks ok, but there’s nothing to support it, so it’s just imperative that people do not go into these evacuated areas until people have cleared them for safety,” said Roush.

Officials are pleading with residents in certain areas to evacuate since emergency services remain strained and it may become increasingly difficult to reach people if they need help.

Update 12:40 p.m. - A flash flood warning has been issued for western Arapahoe, western Adams and eastern Denver counties until 4:30 p.m.

At 12:25 p.m. doppler radar and automated rain gauges indicated that moderate to heavy rain was developing over the Aurora area. The additional rain falling on saturated ground is going to cause urban and street flooding to develop in Aurora and eastern Denver. Creeks and streams in Aurora will rapidly rise as the rain continues. Parks and retention ponds will also fill if they are not full already.

Update 11:30 a.m. – The latest from Larimer County via Luke Runyon:

Currently, six people statewide are either confirmed or presumed dead from the flooding.

In Larimer County, 482 people are on a list of those unaccounted for. County officials say the number doesn’t fully reflect people missing, as basic services in the foothills have been shut off, limiting communication. That number is expected to diminish Sunday as a phone service is restored.

At a Sunday morning briefing, Larimer County Sheriff Justin Smith choked up as he described his Saturday tour of devastated communities in and around Estes Park and Big Thompson Canyon.

“The question I had is, how can we ever recover from this?” said Smith. “Inch by inch, mile by mile, community by community, they’re taking this stuff back. They’re doing it.”

Communities within Big Thompson Canyon remain as islands, with no roads connecting them to the outside world. The narrowness of the canyon also makes helicopter rescue dangerous.

Some residents have taken matters into their own hands. People have begun hiking out of cut-off towns and homes to either find a cell phone signal or emergency workers. Others have begun using ATVs and dirt bikes to traverse the rugged terrain.

Update 11:10 a.m. – Colorado has asked that additional counties be added to the original Federal Emergency Declaration. The declaration provides for federal assistance and it was issued for Boulder, El Paso and Larimer counties.

Update 11:00 a.m. – “Things aren't looking very good for air rescue today,” Andrew Barth, spokesman for the Boulder Office of Emergency Management tells the Daily Camera. Air support has been invaluable in reaching communities stricken by the flood, especially those in the foothills and the mountains. Weather conditions Sunday include rain in the forecast and low cloud cover. In Larimer County there are 16 helicopters standing by for rescue and recovery operations, but they are also grounded by the weather.

Update 9:58 a.m. - The NWS has issued a flash flood warning for the High Park burn area in Larimer County until 12:35 p.m. Details here.

Update 9:30 a.m. – A flood warning has been issued for the following counties:

The warning will remain in place until 9:00 p.m. Sunday. From the National Weather Service:

Many are still unaccounted for across the state. At a news conference in Larimer Saturday, officials stated that a 60-year old woman was missing and presumed dead. “Some witnesses were on scene and saw her in the river and attempted to rescue her but were unable to do so,” said Nick Christensen, spokesman for the Larimer County Sheriff’s Office. With the woman's presumed loss, the death toll for the flood stands at five state wide.

From the statement issued by the White House:

Assistance can include grants for temporary housing and home repairs, low-cost loans to cover uninsured property losses, and other programs to help individuals and business owners recover from the effects of the disaster.