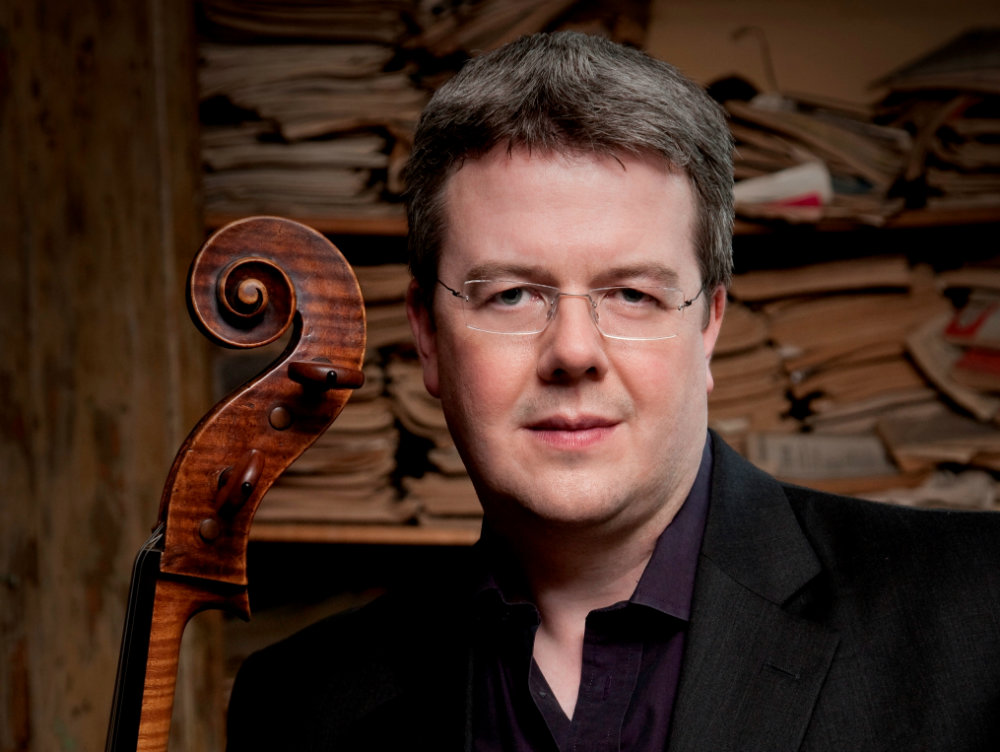 Watkins, who became principal cellist of the BBC Symphony Orchestra at age 20 in 1990, received attention for several memorable performances of the Elgar piece over the past decade. He appeared on British TV performing the concerto on the opening night of the BBC Proms in 2007 and released a widely praised studio recording in 2012.

Watkins, who’s also a conductor and the newest member of the Emerson String Quartet, is featured on a Colorado Symphony program that also includes Tchaikovsky’s Suite from “The Sleeping Beauty” and Prokofiev’s Symphony No. 4.

He spoke with CPR Classical about his favorite recording of the Elgar concerto; his upcoming plans with the Emerson String Quartet; and his brother Huw, who’s a composer and pianist. Click the audio link above to hear the full interview, or scroll down to see Watkins performing at the 2013 BBC Proms.

On Elgar's brilliant score for the cello concerto:

"The cello is not perhaps a natural instrument for battling against a full-size symphony orchestra. It’s a rather mellow sound. But Elgar is so fantastic at making a delicate orchestration that the cello comes through at all points. ... The thing about Elgar is that his music is beautifully written and everything you need to know is in the score and in the parts. … He gives you very detailed instructions for dynamics and articulation and phrasing. And if you follow those instructions, generally speaking, you get a great performance."

On whether thinking about previous recordings of a piece, like Jacqueline Du Pre’s famous version of the Elgar concerto, can be a hindrance:

"In my personal experience that hasn’t happened with the Elgar concerto. It’s happened with other pieces that I’ve studied. The person who 'gets in the way' the most, and I’m putting that in inverted commas because he gets in the way in the most fantastic way, is Rostropovich. Any of the great 20th century concerti -- of Britten, Shostakovich, Prokofiev, Lutoslawski, to name just a few -- he’s recorded all of them and has given pretty much definitive interpretations. So when I approach those concertos, Rostropovich always looms very large and there has to come a time when you have to put him away. You have to lock him back in his box and say ‘I’m not going to listen to you anymore, because you’re so good, you’re just going to make me feel that it’s not worth recording these pieces.' But not with the Elgar, I have to say. And the Elgar is a piece that can take many, many different interpretations."

On upcoming plans for a concert tour and recording sessions with the Emerson String Quartet:

"We’re getting to know each other and we’re playing a lot of public concerts together, which is a great way to set our new sound. But we’ve got recording plans, certainly. I think we may well try a little bit of British music as well. ... I’m hoping that certainly by the end of this year or the beginning of next we’ll have our first recording out."

The Colorado Symphony performs Elgar, Prokofiev and Tchaikovsky at 7:30 p.m. Friday and Saturday and 2:30 p.m. Sunday at Boettcher Concert Hall in Denver. Tickets at ColoradoSymphony.org.