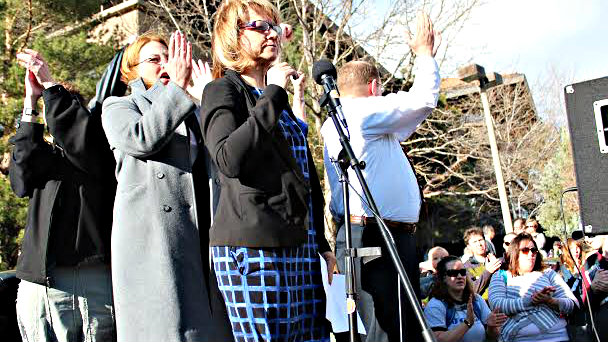 Hundreds of teachers rallied outside of Jefferson County School district offices Monday evening, declaring an impasse on contract negotiations with the district.

The teachers' contract with the district expires next year but in their fourth session of public bargaining, the teachers are asking for a neutral, third party to assist the two sides in finding common ground.

The 86,000-student district has been largely free from turmoil often found in other large districts. That ended in November, however, with the election of three Republican-backed candidates.

Stephie Rossi, the teacher’s union’s lead negotiator and a social studies teacher, says the board isn’t honoring an agreement to restore teacher’s pay to 2011 levels. Teachers have had pay cuts for the past three years but district leaders agreed last year to restore the cuts as the economy began recovering.

“We’re confused,” Rossi says. “Why not? It’s there [in the current contract]. The promise was made. That’s what’s confusing to us. Why has this happened? What has generated this change in approach to compensation?”

But she says teachers are more upset by the board’s vote last week to not put $600,000 into full-day Kindergarten.

“That’s just devastating to students,” Rossi says. “That’s the most troubling decision that was made.”

Jefferson County teachers have had a 45-year tradition of collaboration and cooperation with the board of education, according to Rossi.

“Relationships have been built on that collaborative spirit and we want to maintain those kind of rich relationships that ultimately do what’s best for kids,” Rossi says.