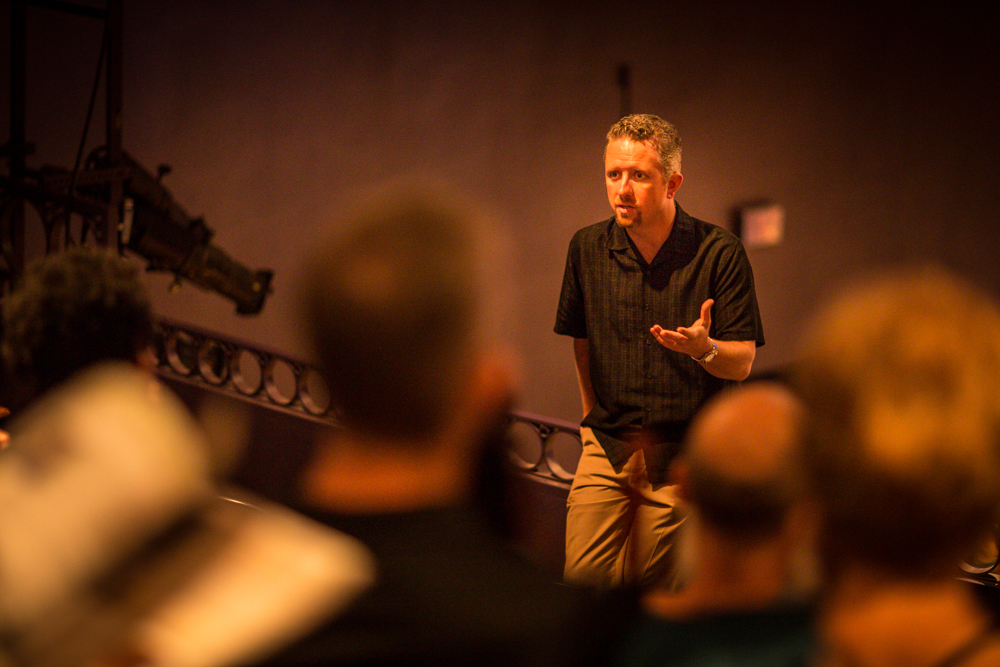 The professional theater festival, which was established in 1958, is one of the oldest theater companies in America dedicated to the works of William Shakespeare.
Based at the University of Colorado at Boulder, the organization presents a handful of Shakespeare’s plays as well as contemporary works inspired by the Bard. Performances take place on campus every summer at the historic Mary Rippon Outdoor Theatre and in the newly renovated indoor University Theatre.

Orr steps into the role after serving as interim director since February 2013. Prior to this position, he was appointed the associate producing director in 2011 and first joined the organization as a performer in 2007.

Here, Orr talks to CPR about this evolution with CSF as well as his aspirations for the organization.

CPR: You’ve been with CSF since 2007 as a performer, then moved into the position of associate producing director in 2011 and, now, producing artistic director. Can you talk about some of the programs you helped establish at CSF during your tenure, like the CSF School of Theatre and the Shakespearean anti-bullying school tour?

Timothy Orr: The school is a small school for kids and teenagers, a place for them to come to study and train in theater. Ours is a little more focused on Shakespeare. It includes after-school classes, workshops and Camp Shakespeare, which now runs 10 weeks in the summer. It’s been a way for us to enlarge the group of people involved with CSF. The Shakespearean anti-bullying school tour started with a production of “Twelfth Night.” As we were touring it to schools, I thought, “Let’s not just do a performance, but let’s have a conversation about bullying because there’s a lot of it in ‘Twelfth Night.’” We partnered with a research institute here on campus, The Center for the Study of Prevention and Violence, a national research center focused on school violence and bullying. The program involves a performance and the actors do workshops with the kids to get them thinking and talking about bullying.This program has really taken off and we’ve performed all over Colorado, which has gotten us quite a bit of national attention. We also started a significant season subscription campaign and made several improvements to the theater. We have all new lights this summer and a new electrical system was put in last summer. These things enhance the audience experience. There will be more programs and campaigns like this to come.

CPR: How has your performance career informed your professional roles in production and artistic leadership?

Timothy Orr: Having worked as an actor for years and having worked here as an actor for several years, I like to think I know what the artists really need in order to succeed. That enables me to support their work and art they are trying to create as best I can. Even knowing little things like what it’s like to work outdoors in this high-altitude climate, how much rest actors need in rehearsals, how much time and support directors need during our tight rehearsal schedule is key. So I can be sympathetic to all of that.

CPR: You’ve been serving as the interim producing artistic director for a little over a year. According to the university, CSF had its most profitable year since 2006 during this time and, so far, advance ticket sales for the 2014 season are already double those of this time last year. Can you talk about how you achieved this?

Timothy Orr: It involved lots of small efforts, and a lot of these efforts were set into motion before I stepped into the role. Now we have tickets on sale for a summer season starting in November, rather than March. That means pushing everything earlier and making decisions much farther in advance. This makes everything easier and gives us more time to plan things correctly. Last-minute decisions tend to get very expensive.

CPR: Can you talk about this summer’s programming? Why did you chose these specific plays?

Timothy Orr: “The Tempest,” which opens the season, is one of my all-time favorites. It’s also one of the all-time favorites of most of the staff and actors here. We haven’t done it since 2006, so it felt like time to do it again. The next play in the season is “I Hate Hamlet.” It’s a hilarious play. I really love the conversation that goes on in this play about why we still produce and perform Shakespeare. Next is “The Merry Wives of Windsor,” which is performed on our outdoor stage. We haven’t done it since 1999, and it’s one of Shakespeare’s best farces. It’s total madcap. Then we are doing “Henry IV” parts I and II. It’s part of a plan set in motion a couple of years ago to complete the history saga of Prince Hal becoming king. There are a lot of throughlines connecting these plays. Magic and the supernatural threads through a lot of them. The character of Falstaff also appears in three of the plays. There’s also a father-son mentor theme that appears in “I Hate Hamlet” and the “Henry IV” plays.

CPR: Can you share some of your artistic vision for the Festival moving forwards?

Timothy Orr: We want to expand our reach so we are performing farther across Colorado with our school tours. We hope to attract more people outside of Colorado to come here in the summers. I also want to continue nurturing local talent, but still bring in outside artists on occasion to help grow our national attention and bring new experiences to our community.