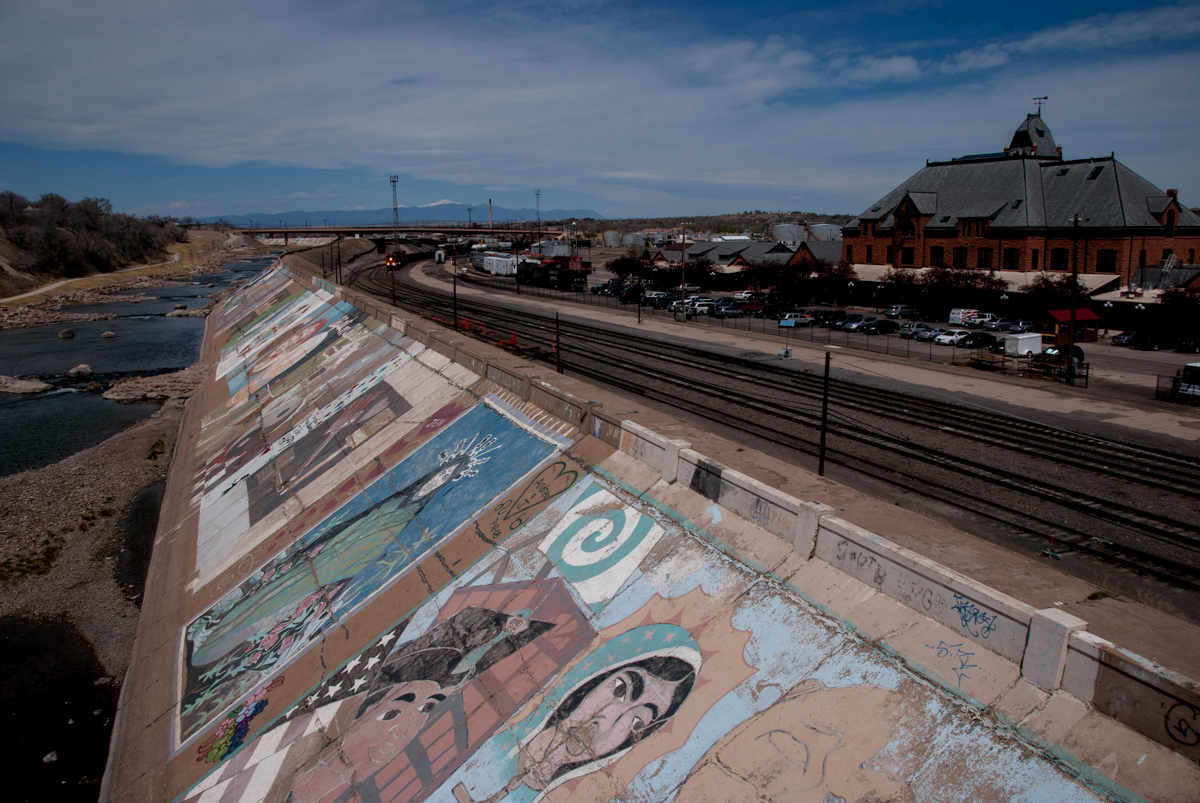 Credit Shanna Lewis / KRCCFreight traffic comes in along the Arkansas River in Pueblo, behind the Union Depot 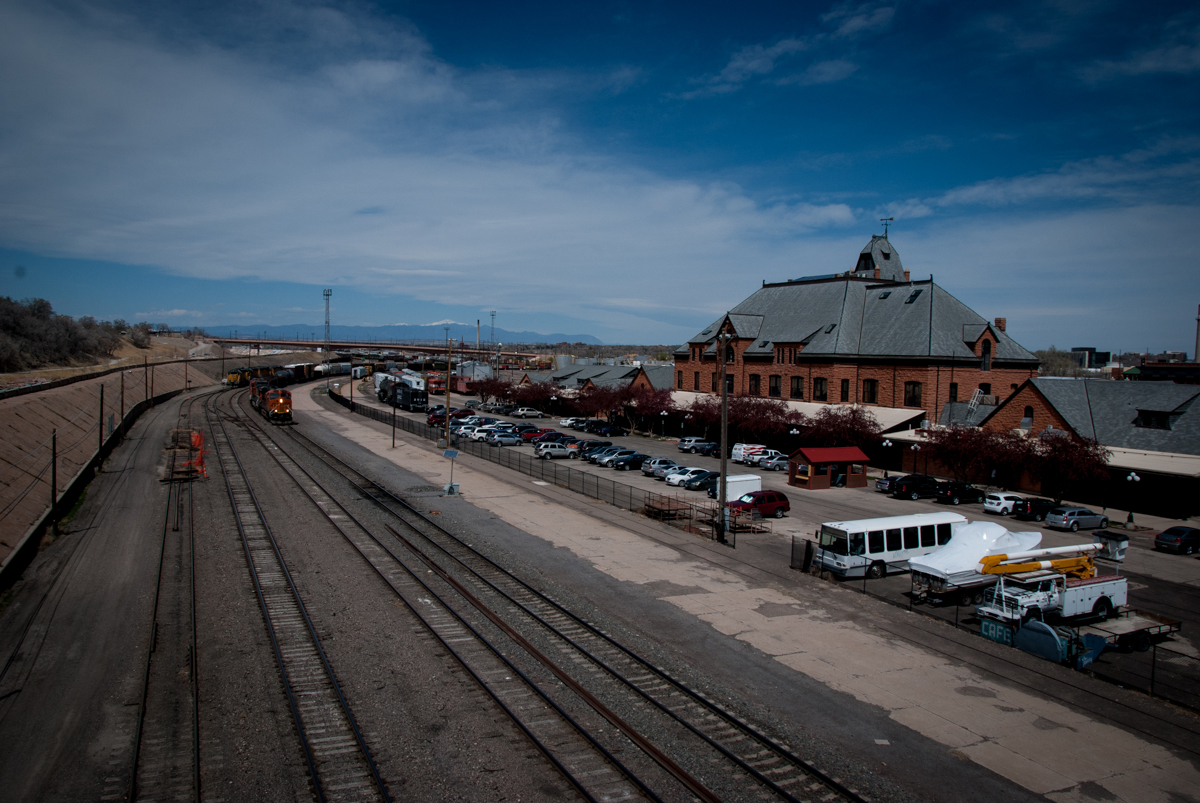 Amtrak’s Southwest Chief rolls through parts of Colorado, New Mexico and Kansas following the historic Santa Fe Trail as it travels between Los Angeles and Chicago. But unless needed repairs are made to the tracks, this section could be rerouted to neighboring states. Yet, the threat of losing this train may be the catalyst that ends up bringing passenger rail service back to Pueblo after a long hiatus.

Trains hauling coal, grain and other freight rumble past Pueblo’s historic Union Depot day and night. Railroads have been a part of Pueblo’s history ever since the first line came through in the 1870s. By 1890, train tracks converged from all directions behind Pueblo’s stately red sandstone depot not far from the Arkansas River.

Dozens of freight and passenger trains rolled into and through the booming steel town. There was even a time mid-century that bright red and yellow Warbonnet locomotives pulled an extension of the Southwest Chief’s predecessor - the Super Chief - from La Junta to Denver via Pueblo. Locals remember this train as the Little Chief or the Denver Chief.

But it’s been 43 years since the last regularly scheduled passenger train stopped in Pueblo. There are still monthly train rides for enthusiasts that Railway Foundation volunteers like Chris Fox give on their short line behind the depot.

This could change though. As part of the plan to save the existing Southwest Chief route - which currently goes through Lamar, La Junta and Trinidad - local leaders are looking to actually add a stop in the Steel City.

"Too many people think of passenger rail as the past - I think of it as the future," says Pueblo County Commissioner Sal Pace.  He says ultimately, he’d like to see the Chief connect with a Front Range rail service that extends all the way to Fort Collins.

"Every time I have to drive through northern Colorado Springs to get to Denver, I imagine being on a train working on my laptop and waving as I pass by all the cars on the side of the road."

Pace also sees potential to connect the expanded route to tourist trains in the area, like the Royal Gorge and Rio Grande Railroads. He says people would plan vacations with a stop in Pueblo to access these scenic rail lines.

"These are train advocates," says Pace, "train nuts who want to see the West via train."

There’s a lot of support for saving the Southwest Chief route, but there are those who are concerned about where the money will come from to pay for it. Pueblo leaders commissioned a study to look at the economic impacts of the rail service. It shows the estimated $40 million it would cost Colorado as part of a five way partnership to repair the current route is offset by the revenue and jobs the Southwest Chief service generates in the state. CSU-Pueblo economics professor Kevin Duncan co-authored the report, and says creating a stop in Pueblo would add to the economic benefits of the line.

"The visitor impact to Pueblo is about 3.4 million a year," Duncan says. "Assuming that remains constant over ten years, that's about $34 million, and then the additional rail cost is anywhere from 26 to 30 million dollars over ten years. If we want to think about that economic impact as the benefit of extending the line, that benefit is going to exceed the additional cost of providing service to Pueblo."

The CSU study did not look at what effects adding Pueblo would have on current Southern Colorado stops. Officials in Trinidad say as long as the route still passes through their towns as proposed they’re all for it. La Junta City Manager Rick Klein says he has concerns about the extra time a Pueblo stop would add to the route, but likes the added mobility it brings to the area.

"For Colorado," Klein says, "it still works out pretty good. So hopefully the legislature will look at that and help fund it. So we’ll save this and make sure rural America doesn’t get left behind. This is economic development. We do realize how important train travel is going to be, not only now but in our future."

The original Union Depot is the likely choice for a stop.

It’s part of a revitalized historic district in the heart of Pueblo. With its tall clock tower, sparkling stained glass windows and carved wood panelling, the restored train station houses a number of businesses and is a popular venue for meetings and parties.

Judy Lee owns a busy clothing store nearby. She thinks bringing passenger train service back to Pueblo would generate even more activity in the area.

"The kind of businesses that do well down here," says Lee, "are the ones that depend on walk by traffic - that people will look in your windows -- will walk into your store  and relax -- they can stop and have a little bit of lunch or go to dinner."

It may not be only retail and service businesses that stand to gain from keeping the train here in Colorado. It’s possible that Pueblo’s Evraz Rocky Mountain Steel Mill would manufacture the some of rails needed to repair the tracks. And if that happens, it would be another way the Steel City’s past connects to its future.

Communities along the Southwest Chief route, including Pueblo County, have committed funds as part of an application process for a $15 million grant from the U. S. Department of Transportation, known as a TIGER grant.  That grant announcement is expected this summer.