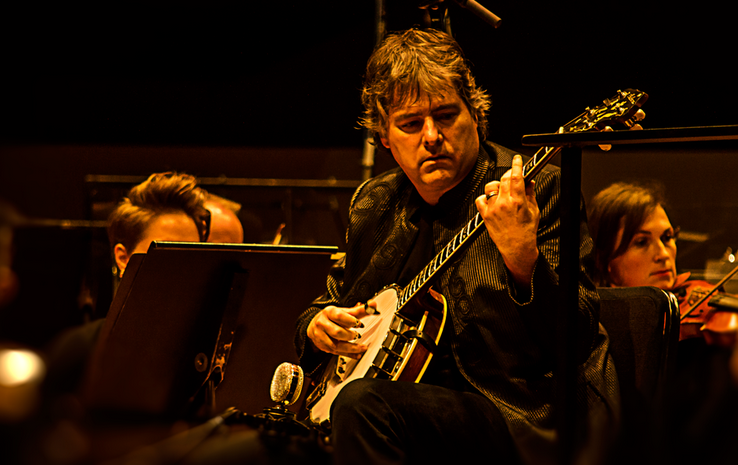 When Grammy-Award-winning banjo player Béla Fleck made plans to play with the Colorado Symphony at the 41st annual Telluride Bluegrass Festival this summer, he had a special request.

Fleck insisted that, as part of the concert’s programming, the orchestra play Mozart’s “Jupiter Symphony,” the final -- and longest -- symphony written by the composer.

“It’s one of my favorite pieces ever and I’ve had a number of incredible experiences listening to it,” Fleck says.

The program will also include Fleck’s own composition, “Concerto for Banjo and Orchestra.”

Originally commissioned by the Nashville Symphony in 2011, Fleck plays the concerto with the Colorado Symphony Friday evening in Telluride.

Fleck listened to a number of classical albums while working on “The Impostor” -- the album that features “Concerto for Banjo and Symphony Orchestra.” Fleck says the “Jupiter Symphony” stuck out for him.

“I listened to all the Mozart late symphonies and that one just jumped,” Fleck says. “In fact, I remember saying to my wife, ‘You gotta listen to this.’”

Fleck hears a connection between “Jupiter” and his own musical tradition as a banjo player.

“Mozart has a rhythmic component that, to me, relates to bluegrass.” Fleck says. “That this piece kind of rocks. It grooves and it rocks while being harmonically one of the most interesting things Mozart ever did.”

In addition to performing with the Symphony, Fleck brings another ensemble with classical roots to Telluride this summer -- the Brooklyn-based string quartet Brooklyn Rider.

According to Planet Bluegrass, the Lyons-based production company behind the Telluride Bluegrass Festival, this is the first time the Festival has ever hosted a chamber orchestra or classical string quartet.

Fleck has been performing at Telluride for 32 years. He considers Colorado to be a hotbed for bluegrass music.

“It’s a place where I’m surrounded by people I admire, I’m allowed to do what I want to do and there’s a big audience for it,” Fleck says. “And it’s one of the most beautiful places on the planet.”

To close out the four-day event, Fleck performs with an ensemble of musicians who share his long history with the Festival.