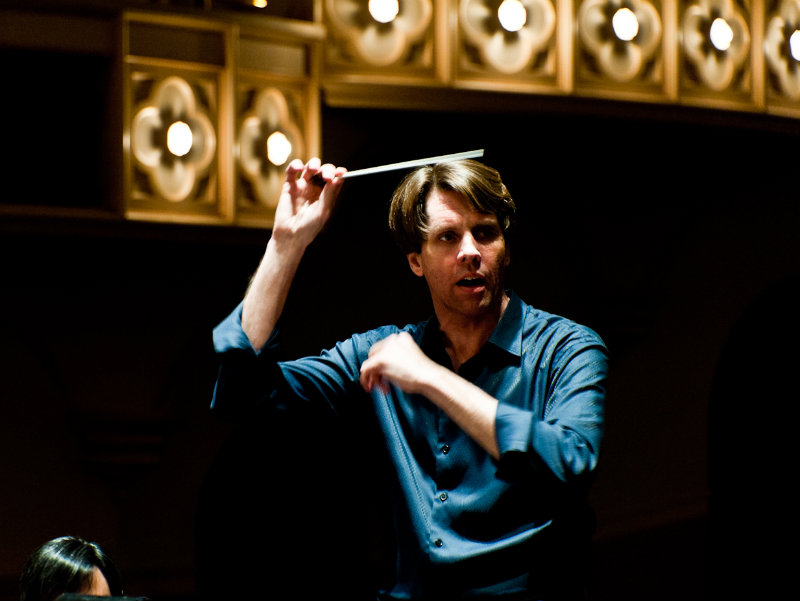 (Photo: Glenn Ross)Michael Butterman, music director of the Boulder Philharmonic for eight seasons, on Sunday took part part in the first-ever collaboration between his orchestra and the Colorado Music Festival.

He served as guest conductor for opening night at CMF, which plays each summer at Boulder's Chautauqua Auditorium.

Sunday’s concert featured Mozart’s “Haffner” Symphony No. 35, Brahms’ Serenade No. 2 in A (whose score does not include violin parts) and two pieces by Richard Strauss: "Burleske" for Piano and Orchestra and Serenade in E-flat.

Butterman spoke with CPR Classical's Karla Walker about the collaboration with CMF, how a guest conductor establishes a rapport with an orchestra, and the joys of conducting outside in the summertime -- or in a barn like Chautauqua Auditorium. Click the audio above to hear the interview.

"The idea of hearing music in a natural setting and creating it in this fantastic natural beauty is inspirational," he said. "The other challenges, however are far more prosaic," including wind, insects, heat and humidity.

Butterman also discussed his strategy for programming concerts with the Boulder Philharmonic and his plans to debut a piece by Stephen Lias, a composer who has held residencies in several national parks.

He's the first of several guest conductors to take the podium at CMF this summer. He'll be followed by three candidates for the festival's vacant music director position.

If you couldn’t make it to Chautauqua Auditorium this Sunday, you can hear the concert on CPR Classical at 7 p.m. Saturday, July 5, as part of the SummerFest concert series.