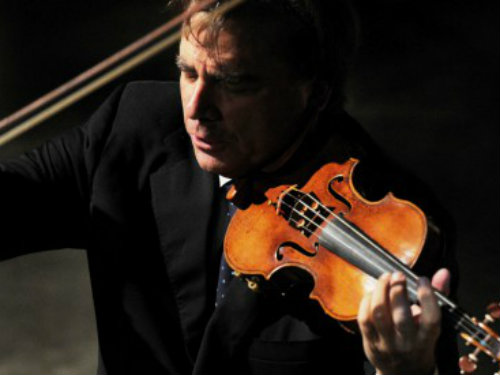 (Photo: Courtesy Rome Chamber Music Festival)When violinist Robert McDuffie approached composer Philip Glass about writing a piece to be paired in performance with Vivaldi’s “The Four Seasons,” Glass was enthusiastic but busy with other compositions.

But once Glass began writing the piece -- seven years later, in 2009 -- he composed it in a fury, McDuffie recalled in an interview with CPR Classical’s Charley Samson during a 2011 visit to the CPR Performance Studio.

Glass called the violinist daily while composing, asking for feedback as the music took shape.

“I gave him a laundry list, and he gave me everything I wanted,” McDuffie recalled.

McDuffie requested, and Glass supplied, a piece with nearly the same orchestration as Vivaldi’s. (Vivaldi wrote a harpsichord part. Glass, at McDuffie’s suggestion, wrote instead for a synthesizer.) And Glass also wrote the “kick-ass ending” McDuffie asked for.

Violin Concerto No. 2: “The American Four Seasons” made its debut in 2010, complementing Vivaldi’s piece in concert.

“He’s America’s Vivaldi,” McDuffie said of Glass. “They both have the same DNA, with these ostinatos down below that keep repeating and the beautiful melodies up top.”

Click the audio link above to hear more of McDuffie’s account of how the music took shape, and how the composer and violinist disagree over which movements correspond with each season.

Hear McDuffie perform music from the piece at the Aspen Music Festival in our CPR Classical's SummerFest concert broadcast at 7 p.m. Tuesday.