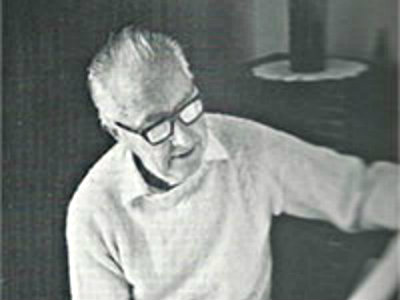 As biographer and Metropolitan State University music professor  Larry Worster outlines in “Cecil Effinger: A Colorado Composer,” Effinger is remembered not only for his compositions but for the tools he created that helped other composers and musicians.

As a child in the Springs, Effinger played violin and oboe; his father was also a composer. Effinger attended Colorado College and majored in mathematics, but while at the college he also met Roy Harris, a key American composer of the first half of the 20th century.

“Harris really opened up a door for us,” Effinger said in a 1988 interview, “counteracting the Viennese approach” -- the atonal music typified by some of Arnold Schoenberg’s work. In contrast, Effinger found himself attracted to a compositional style without the strictures of Schoenberg’s twelve-tone technique.

Geography may have helped, too: “Living in the west, with the mountains and the openness, it wasn’t non-sophistication, it was the openness of the whole area,” he said. “I didn’t take to the ‘Viennese’ type of thinking at all! I welcomed influences other than that.”

Effinger was prolific. He wrote nearly 170 pieces for ensembles ranging from chorus to orchestra. He composed five large symphonies and two “little” symphonies. A performance of his Fourth Symphony at Red Rocks Amphitheatre was broadcast nationally. Over time, though, Effinger focused on choral music.

“In the late 1950s, Effinger gave a talk: ‘Why Write Another Symphony?’” Worster says. “He’d spent all this time writing a symphony, creating the parts, and then getting one or two performances. He got exhausted by that, so then he turned to works with words: a major opera in the ‘60s, and then for the rest of his life primarily choral works — his best known works.”

Perhaps the best known of these is a work with another Colorado connection: “The Four Pastorales” for choir and oboe, a 1962 setting of the words of Colorado poet laureate Thomas Hornsby Ferril.

Effinger is also renowned in the world of music for a decidedly more mechanical contraption: the MusicWriter, a typewriter for preparing scores.

Speaking to Time about the invention in 1955, Effinger said he didn’t “expect a rush of composers suddenly to sit down behind desks with cigarettes dangling out of their mouths and begin pouring out a ream of symphonies on these machines."

Still, in the decades before the personal computer, Effinger’s invention allowed composers of all kinds an easier way to print and share their work.

Effinger died in 1990 at age 76 but his legacy continues to resonate in another area: as a teacher.

“He started working at the University of Colorado in 1947,” Worster says. “Essentially he became more and more comfortable with [teaching] and stopped trying for national or worldwide recognition for his works.”

In music departments in Colorado and beyond, Worster adds, “they still talk about Effinger as a warm, genial, supportive man with very high standards.”

Click the audio above to hear Worster discuss what made Effinger a unique composer.