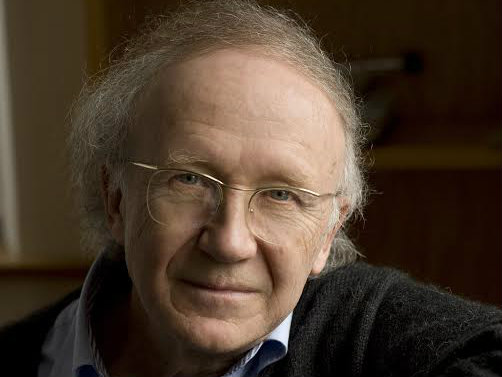 (Photo: Priska Ketterer/ECM Records)Swiss composer and oboist Heinz Holliger has never actually heard one of the pieces that most deeply affected him as an artist.

Holliger’s new disc, “Aschenmusik,” contains the second recording of his piece based on Robert Schumann's lost Cello Romances,  written before Schumann entered the mental asylum in 1854.

Robert’s wife Clara Schumann burned the scores. All that remains of the music is a first-person account of a performance witnessed by the great violinist Joseph Joachim.

Clara Schumann actually burned a number of Robert Schumann’s late works, concerned they were of uneven quality. She worried about their long-term effect on his reputation, thinking they might be seen as proof of Robert’s insanity.

Holliger has spent decades fuming over Schumann’s lost romances.  “I find this act of destruction outrageous and thought about it ever since I discovered the fact,” he writes in the new disc’s liner notes. “My initial impetus was to rebel against this barbaric act of destruction. … It seemed to me as if Schumann himself had been burnt.”

Holliger’s “Romancendres” aren’t an attempt to reconstruct the lost Schumann romances.  Rather, he calls them a meditation.

With this backdrop in mind, listening to this recording from ECM is a haunting experience. We hear Holliger’s thoughts on his hero losing touch with reality by way of skillful performances from cellist Anita Leuzinger and pianist Anton Kernjak. Holliger finds inspiration in the music of the composer who he’s said “has been at the true center of my thoughts”.

The first movement, “Kondukt” (which can translate as “funeral procession”) opens with what sounds like piano strings being plucked directly. The cello notes seem to swell and then quickly disappear, sounding almost like a car passing -- or maybe like Robert Schumann’s life passing by. Later in the movement, clusters of piano chords support the sustained cello lines.

The third movement's title translates as “flapping wings." I  don’t think I’ve ever heard anything like the interplay here between piano and cello.  It sounds like high piano strings plucked almost like a guitar while the cello seems to represent a bird in flight.

Throughout the piece, Holliger includes the sort of musical motifs Robert Schumann favored. Holliger spells out Robert's and Clara’s names and initials, and builds the final movement -- another funeral procession --   around a musical figure that spells out “Endenich,” the neighborhood in Bonn, Germany, where Schumann died.

Throughout the piece, Holliger uses modern, sometimes atmospheric, musical language that Schumann himself never heard. The raw emotion comes through loud and clear.

The disc also includes several Robert Schumann pieces that bookend Holliger's piece nicely, including a performance of Schumann's Romances for Piano and Oboe performed by Kernjak and Holliger.