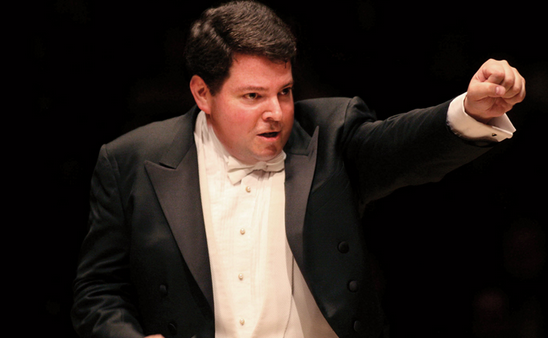 The program also features Tchaikovsky’s Fifth Symphony and “Timepiece” by Cindy McTee, a piece Litton commissioned in 2000 when he was music director of the Dallas Symphony.

Litton spoke with CPR Classical’s David Rutherford about the pieces on this weekend’s concerts, as well as the symphony’s hopes for a renovated and reinvigorated Boettcher Concert Hall. Click the audio above to hear the interview.

The symphony opened its 2014-15 season two weeks ago in the middle of an intense debate over the hall, which the orchestra has called home since 1978.

City of Denver officials say repairing the building may be too costly and demolition may be the best option for the venue. Symphony leaders responded by calling for a $40 million renovation project that would give the hall more flexible seating and better acoustics.

On collaborating with Shaham:

"He makes the most extraordinary sound. … You can pretty much always recognize when it’s Gil Shaham -- and I think that’s very special, when somebody has that kind of sonic fingerprint."

On why an upgraded Boettcher Concert Hall is essential to Denver’s cultural community:

"Denver deserves a great orchestra, which they’ve got. They also deserve a great concert hall, which they could have."

On how the symphony musicians felt energized after seeing plans for a renovated concert hall:

"Let’s face it: They’d heard us talking about this for days. To actually see the pictures and hear the architects speak, it becomes so much more believeable. … There’s just a great deal of hope here that this will energize the community into backing our desire to fix a home that’s worth fixing."