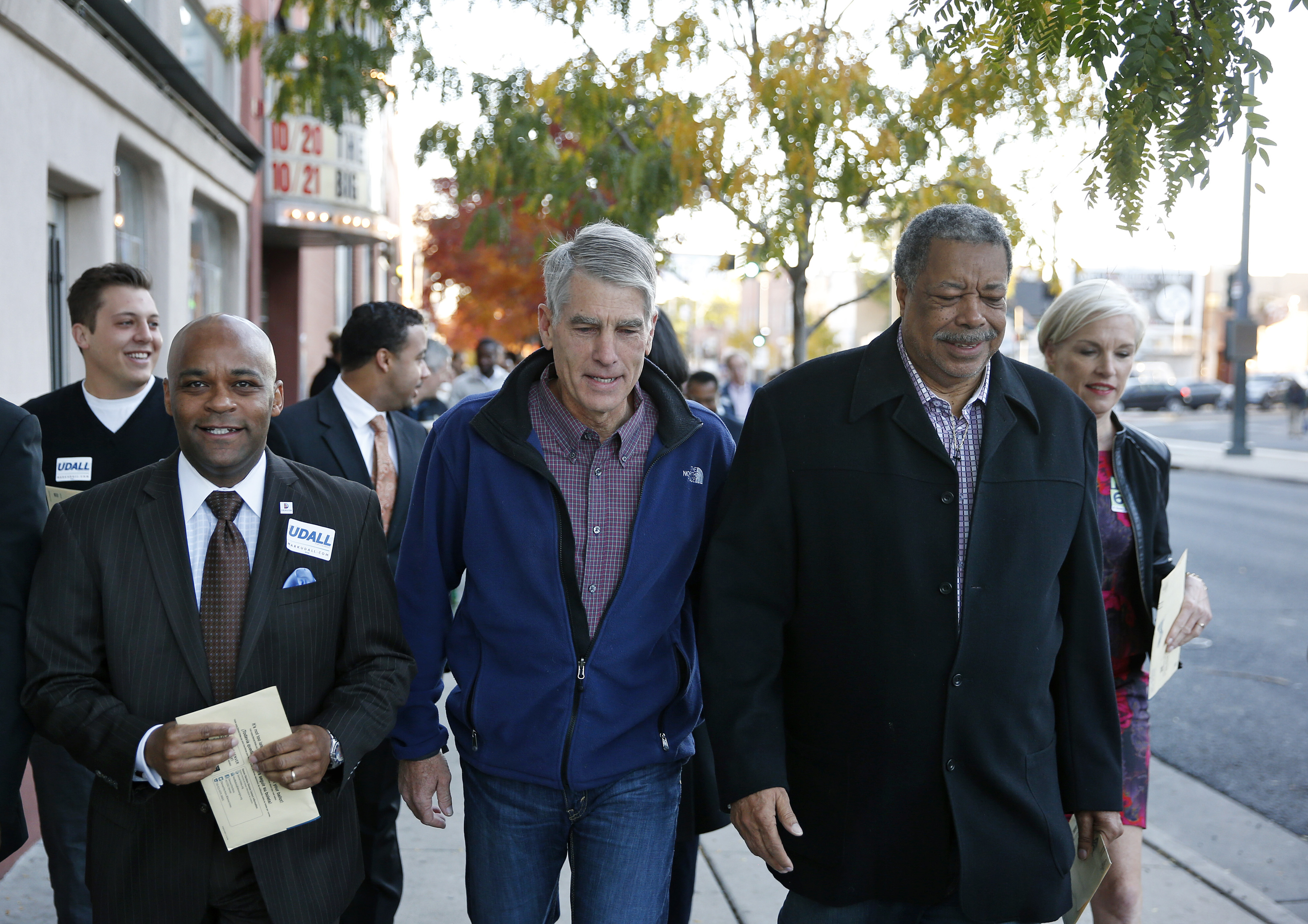 (AP Photo/Brennan Linsley)Dave Lightowler never even got to say Sen. Mark Udall's name. The moment Lightowler mentioned another Democrat running for a Congressional seat, the man inside the house in this swing suburb closed the door in the canvasser's face.

Undaunted, Lightowler noted on his iPad that while one voter in the house had turned them away, a second — the man's wife, who is not registered with either major political party — hadn't been reached yet. Democratic party canvassers would return and try to talk to her. "We try again until Nov. 4," Lightowler said. "This is the time. This is the playoffs."

The relentless ground game to inspire voters to cast ballots has helped Democrats dominate Colorado under even the most difficult political circumstances. Four years ago, the strategy helped Sen. Michael Bennet's come from behind to win reelection. Now Bennet is directing the Senate Democrats' national campaign arm, testing whether a $60 million get-out-the-vote effort — named, "The Bannock Street Project," for his old Denver campaign office — can do the same for Udall and other Democrats defending their Senate majority.

Republicans are testing their own strength on the ground in Colorado, Louisiana and other key races, trying to counter the Democrats' traditional edge in turnout.

"The conventional wisdom is these Senate races are over, the Senate is going to be lost," Bennet told canvassers in Aurora last week, referring to predictions that Republicans will reach their goal of a six-seat gain to win majority of the Senate after the Nov. 4 election. Bennet predicted party volunteers will preserve the Senate for Democrats. "This victory will be so much sweeter."

Colorado Republican Rep. Cory Gardner has led Udall in recent public polls. Bennet didn't lead in a single public poll in 2010. Udall's campaign is modeled on Bennet's — but with a get-out-the-vote operation three times larger. The incumbent may also benefit from Colorado's new elections law, passed last year by its Democratic-controlled legislature over Republican objections, that sends mail-in ballots to all voters and allows citizens to register until Election Day.

There's no guarantee Democrats will dominate on the ground this year. Republicans in Colorado and elsewhere in the nation have upped their focus on getting out the vote. But GOP and conservative opponents know the ground game remains a potent Democratic weapon.

"The question in Colorado is, is the left's ability to organize, combined with all-mail ballots, enough to overcome a voting record from Udall that is clearly out of step with the state?" said Tim Phillips, executive director of Americans For Prosperity, the conservative group funded by the billionaire Koch brothers.

Colorado has symbolized the Democrats' Obama-era electoral edge — a coalition of Hispanics, white college-educated single women and younger voters, coupled with the party's get-out-the-vote machine. That combination has helped Democrats win every top-of-the-ticket race in Colorado for the past decade, despite an electorate that is evenly divided between Republicans, Democrats and voters not affiliated with either party.

Gardner, 40, represents Republicans' best chance to break that cycle and demonstrate that this state can't be taken for granted by Democrats. 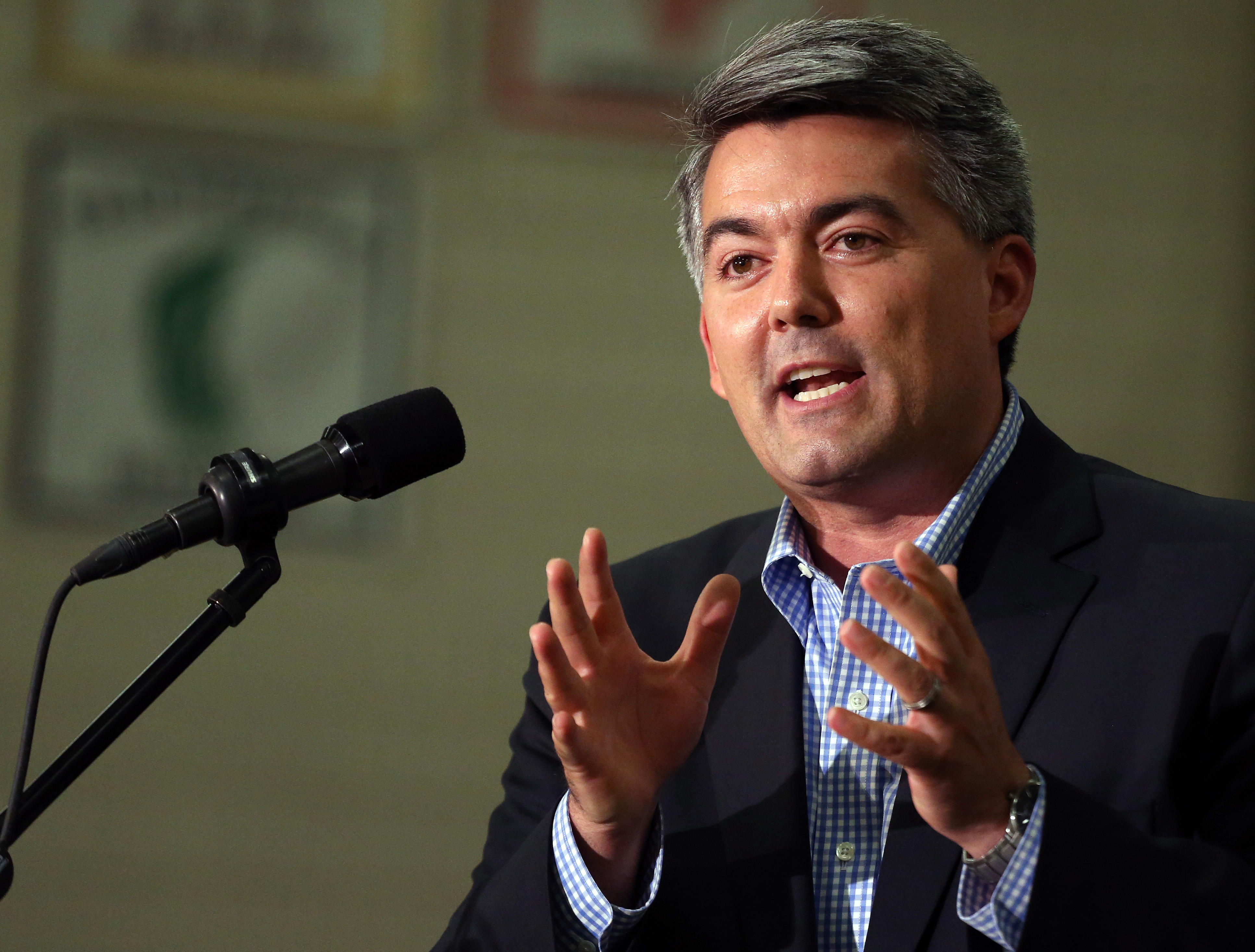 (AP Photo/Brennan Linsley)"Cory is such a talented, dynamic guy that, if we can't win with him, when are we going to win?" said Dick Wadhams, a GOP consultant and former state party chair who is predicting a Gardner victory.

The race had been deadlocked in public polls since Gardner, considered a rising star in the U. S. House, declared his candidacy in late February. But both sides agree the Republican has gained ground amid escalating worries over the Middle East instability and the spread of Ebola.

Gardner has shifted to the center on immigration. And he has disavowed a state measure that would grant legal rights to fertilized eggs, outlawing abortion and possibly some forms of birth control — even though he supports similar federal legislation.

After attacks from Udall, Gardner proposed allowing birth control pills to be bought over-the-counter. The idea could increase costs on consumers but is aimed at showing the father of two is not opposed to the concept of birth control.

"Just the campaign that Gardner has run and the kind of candidate he is has already turned the tide of Republican fortunes — to have a candidate who is not gaffe-prone, who is hard to characterize as out of the mainstream," said Rob Witwer, a former Republican state legislator who co-authored a book on how Democrats took over the state.

Though Bennet and then Udall were both upbeat as they cheered on volunteers in Aurora, some of their canvassers recognized the strain of a tight race.

Julie Gonzales, a union organizer, said she's even more nervous about Udall's prospects than she was about Bennet's in 2010. She blamed Republicans for sapping peoples' hopes and the public's disgust with "the past four years of nothing getting done" in Washington.

"They expect miracles overnight," she said as she left to knock on more doors.