Eric Bransby is working on a portrait.

But the artist doesn’t seem to notice the cold. He’s completely engrossed in the image taking shape on the easel before his eyes -- a study for a new mural that Bransby hopes to install at nearby Colorado College in time for his hundredth birthday.

Bransby is one of the last living links to the great age of American mural painting, an era that reached its climax in the 1930s when artists like Diego Rivera and Thomas Hart Benton were at the height of their fame.

Bransby was one of Benton’s star students. He went on to create 35 murals in prominent buildings across the west.

Now, at the age of 98, Bransby is still painting -- and he's planning his next public project.

A retrospective of the artist’s work is running in Denver at David Cook Galleries through Jan. 31, 2015, where the artist's works on canvas and paper are selling for up to $40,000. ​

Bransby draws from a live model every week. It's a habit he developed way back in the 1930s at the Kansas City Art Institute where he studied with Benton.

"Drawing has been a continuous thing for me, like exercises for a musician," Bransby says. "It’s refreshing. I draw better. I paint better."

Drawing the human figure -- on paper, on canvas, and whenever possible, on walls -- has been one of the few continuous things in this artist’s patchwork career.

"I just love to see big figures on the wall and create the space to hold them visually," Bransby says. "It’s exciting. It’s like seeing actors on a stage."

Bransby was born in 1916 in Auburn, New York. He spent his childhood in Pittsburgh and Council Bluffs, Iowa where his father was a preacher. The artist says his parents weren’t very interested in exposing Bransby and his brother to art.

"We were living in the city," Bransby says. "Bicycling and skating in the streets and hanging on to the back of wagons and that kind of stuff."

One of Bransby's earliest artistic efforts was of a drawing of a ship -- the Cunard liner that the Bransby family sailed in 1926 on a visit to relatives in England.

"It wasn't a bad ship," the artist says of this drawing, which he did when he was 10 years old. "The smoke was blowing one way. The water was moving another way. And the flag was flying a different way."

From that moment onwards the minister’s son was hooked on drawing. Bransby’s parents hoped he’d go into the church or medicine. But he had other ideas.

"I demanded then finally during the Depression that I got to get to art school," Bransby says. "And they said, ‘well he’ll do one year and he’ll come back so discouraged that we’ll make something else out of him.’ But that didn’t happen. I found heaven."

Bransby was a conscientious student.

He devoured classical techniques under Benton in Kansas City. Bransby embarked upon a rigorous regimen of figure drawing and anatomy classes patterned after the European academies. Benton painted alongside his students. Bransby remembers him as a down-to-earth talker, a heavy drinker, and, above all, as a taskmaster.

"Benton was all business. You got in the studio and by god you worked like hell."

During his years at the Broadmoor Academy in Colorado Springs, Bransby learned how to paint frescoes from the French-American muralist Jean Charlot. Boardman Robinson, a famous illustrator, taught him to become a better draftsman.

Things looked promising for the talented young artist during those formative years.

Benton included two Bransby paintings in a high-profile art show in New York in 1941. And in 1942, he got to paint his first professional mural. It was a commission for a local high school as part of the Works Progress Administration Federal Art Project.

The advent and aftermath of World War II brought upheavals to Bransby’s personal and professional life. 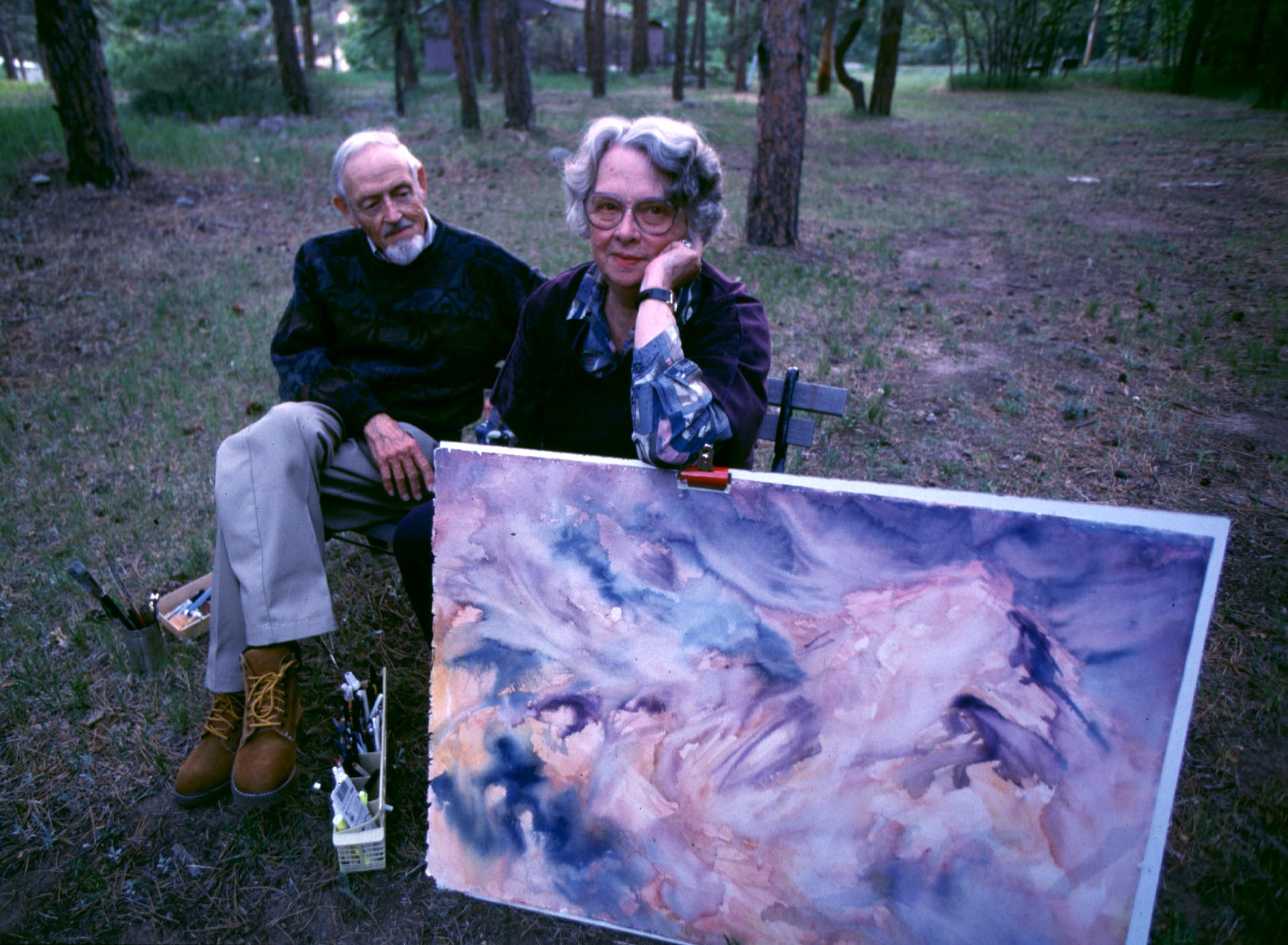 Bransby was drafted into military service soon after marrying Mary Ann Hemmie, a talented artist who was a constant source of inspiration to Bransby throughout their 70 years together. (She passed away in August, 2011.)

Bransby found a way to continue making art while at Camp Leavenworth, Kansas. By day, he undertook military murals. And he carried on painting by night.

"I’d go down and paint at night in the latrine because they’d leave the lights on down there," Bransby says. "They called me the latrine painter."

Then, after the war, abstract expressionism hit and the art world gravitated towards non-representational painting.

"For that generation it was very difficult to make your way as a figurative painter," Case Western Reserve University art history professor Henry Adams says. "A number of artists who had been very successful in the late years of the 1930s then suddenly found that the whole art world had changed."

That was true for Bransby.

In the years after the war, Bransby and his family crisscrossed the country in pursuit of work, grants and educational opportunities. Mural commissions came sporadically during the 1950s and 60s. His daughter was sick with chronic asthma. And medical bills were mounting.

So Bransby took a series of academic appointments and jobs in the military, such as working as an illustrator, designer and art director for the US Air Force Academy in Colorado Springs.

Throughout the upheaval, Bransby stuck to his passion for figurative painting.

"I thought about it quite a long time and I said ‘godammit, I’m going to draw the figure whether it’s in favor or not, if a wall comes along I’m going to do it,’" Bransby says.

In fact, in the late 1940s, he received a grant to study abstract painting at Yale under the exacting European abstract artist Josef Albers.

Bransby started to incorporate abstract forms into his figurative pieces. Blake Milteer, museum director at the Colorado Springs Fine Arts Center which houses many of Bransby’s works, says this combination of the figurative and abstract is what sets this artist’s murals apart from others of his generation.

"One of the things that makes his work unique is he combines that Renaissance-based figurative tradition with what he learned from Josef Albers," Milteer says. "He combines figures with a dramatic sense of abstraction and of architecture, placing these figures in a shifting kind of space."

In the 1980s and 1990s, Bransby’s profile as a muralist rose once more. He received diverse commissions like the St. Paul Lutheran Academy in Skokie Illinois and the Will Rogers Shrine in Colorado Springs.

Bransby’s stick-to-it-ivesness through thick and thin is a constant source of inspiration to his students.

"He’s 98 and he’s still doing it," longtime student and former art assistant to Bransby Sushe Felix says. "That was a really good lesson: To never give up. Keep trying. Keep going."

Bransby’s age has slowed him down. He gets around with the help of a walker and his hands shake when he paints. But he’s always got his eye on the next project.

He’s hoping to paint his new mural depicting the Greek mythical character of Prometheus on movable panels in his studio. The finished panels would then be installed at Colorado College.

Painting on mobile surfaces rather than directly on a wall means that the work will survive even if the building doesn't.

"I try to make each mural a project that will somehow expand my abilities a little bit more," Bransby says. "Everything has to be a new adventure."

1947 -- Robinson suffers stroke; he is replaced by Jean Charlot

1968 -- Bransby visits Florence, Italy on a grant from the University of Missouri to study murals

1985 -- Eric and Mary Ann Bransby move back to Colorado Springs