“In 10 minutes, it can do this,” he said, standing near tumbleweeds that come up to his chest. “The worst thing is, this canal is 113 miles long. So you don’t have one spot like this, you have 113 miles that look like this. It’s like starting over.”

Farmers in the far reaches of southeast Colorado are performing what’s become an annual tradition: tumbleweed management. Mauch uses fire to torch the weeds. When water moves through his canal, he uses a trackhoe to scoop out the weeds.

Between 2011 and 2013 was the driest three-year stretch of weather in recorded history for parts of southeast Colorado. Conditions have improved slightly since then. But a look at U.S. Drought Monitor maps over recent months shows drought persisting at varying levels.

The scarcity of water is connected to another problem in Colorado. The state's population is expected to double by 2050, and there won't be enough water to meet the demand. For farmers like Mauch, there's hardly enough water to meet current needs with the drought, let alone future ones. This tension is one of several reasons why the state is creating its first-ever water plan with the help of regional water managers. Friday, they hand in their plans for how to be prepared for the future.

City vs. ag tug of war

A big question is where municipalities along the Front Range will find more water.

Over the years, the scarcity has led to municipalities buying up land and water rights near Rocky Ford, Colorado.

“If the Front Range is going to continue to grow, it will only be at the expense of agriculture," said Mauch. "There’s just not enough water."

“We seem to kind of have a target on our back right now with a lot of land acquisitions, and a lot of municipals interested in our water, large groups speculating on our water,” said Mauch.

Karl Nyquist with C&M Companies said the plan is to use the 14,600 acres of land for agriculture. The exact partners who will use the land have yet to be determined.

As Mauch worries about the plans of his new neighbor, water managers in the Arkansas River Basin have crafted a plan for the future. The group and eight others are submitting their plans today to the state.

“The Arkansas River is the entire economy of the Arkansas Basin,” said Gary Barber, who worked as project manager on the local Basin Implementation Plan.

Barber says fixing the area's aging infrastructure and adding more water storage will be key for the region, as it is for others. The Arkansas Basin is looking to build existing reservoirs so it can store an additional 50,000 to 70,000 acre feet of water during wet years.

“The question is how do to you do that with all the stakeholders feeling like they’ve had a voice in that plan,” said Barber.

Public input is a key part of all the eight roundtable plans. (There are nine basins, but the Metro and South Platte basins are producing their plan together.) The Arkansas Basin has taken input from thirsty municipalities like Pueblo, the rafting industry, environmentalists, and farmers.

James Eklund, director of the Colorado Water Conservation Board, said the state will spend the coming months reviewing details across the eight basin plans.

One of the most persistent challenges across the areas is determining how the state will meet the projected gap between supply and population demand. Eklund wants to promote ways to do this without drying up agricultural land, which holds the majority of the state’s water rights.

The South Platte River Basin, which includes the agricultural powerhouse Weld County, provides another illustration of what can be lost. In 1976, the basin had more than 1 million acres of irrigated farmland. In 2010, the amount of irrigated land dropped to 850,000 acres. 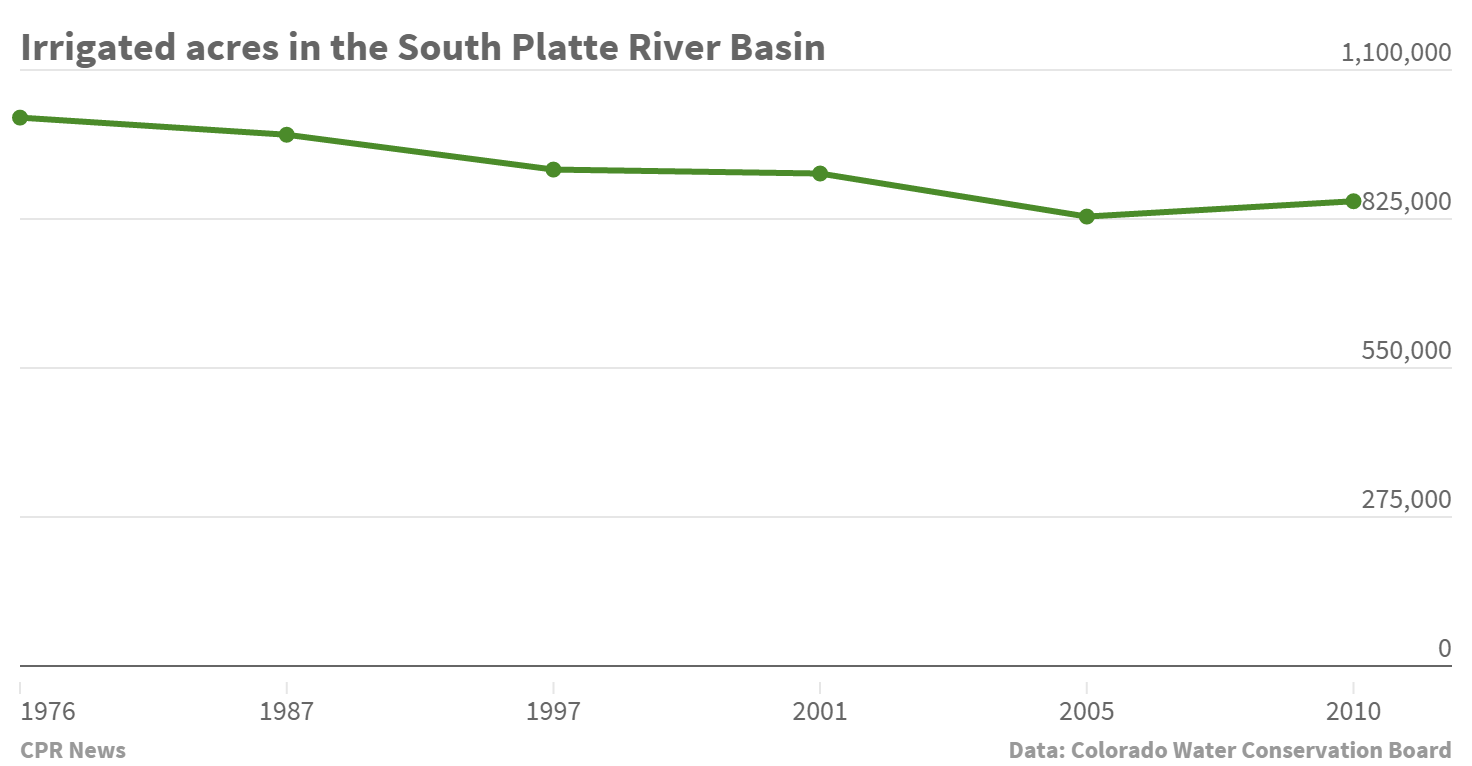 “What we can’t do in the water plan is tell people they can’t buy or sell,” said Eklund. “But what we can do is create other products like conservation easements … to allow them to keep the water in perpetuity tied to the land.”

Farmer Dale Mauch is part of another solution: the Arkansas Super Ditch Project. It’s a combination of irrigation canals and farmers who lease water to cities while continuing to own the land.

But Mauch worries developers may be moving faster than the state's water leaders. And he says there's no complete insurance policy on how to save the area's farm land.

“Basically 80 percent of the river goes to agriculture. So if you’re looking for water, and one group has 80 percent of it, where are you going to go look for it?"

Colorado will release a second public draft of its statewide water plan July 15, and will accept public comments until Sept. 17. A final plan is expected no later than Dec. 10.