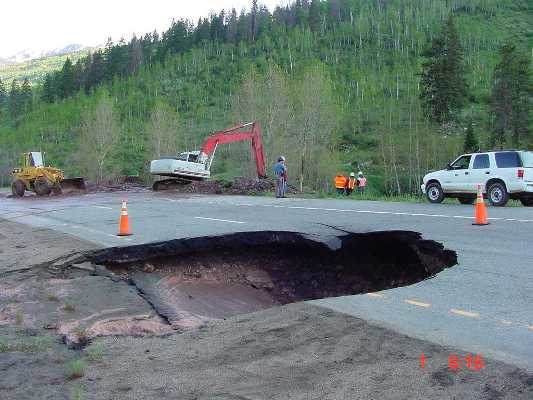 (Courtesy Colorado Department of Transportation)The sodden spring around large swaths of Colorado means that potholes are facing some competition for the title of most annoying road maintenance issue this year: Sinkholes are swallowing big chunks of roadway.

What's going on? Sinkholes occur when a hollow area below ground level collapses. Those underground voids can appear after failures or breaks in storm drains or mines, or they may be the result of natural underground erosion to soluble bedrock, where water seeps -- or washes -- in, according to the Colorado Geological Survey.

That makes sinkholes different from potholes, which begin when water seeps into cracks in a road surface and decay the ground immediately beneath.  Drivers who travel the same stretch of road each day can often see potholes slowly grow and take shape over time. Sinkholes take shape out of sight a suddenly appear when the ground gives way. They can can swallow whole buildings and cars and cars.

Denver Public Works Spokesperson Heather Burke says her department generally expects a few sinkholes in the late spring and early summer because of the wet weather. Potholes, on the other hand, tend to arrive earlier in the spring during when Colorado experiences freeze-thaw cycles,  pushing the road surface upward.

Shifts in temperature were particularly harsh on Denver roads this year. Denver Public Works has filled 42 percent more potholes this year than they had at the same time last year, Burke says.

Neighborhoods in Colorado Springs have been plagued by sinkholes caused by failed infrastructure. Corey Farkas, head of the Colorado Springs Streets Department, says he is struggling to keep up.
"We have a perfect storm, no pun intended, with our sinkholes here," Farkas said. "This particular year we have had some exorbitant rainfall at this point in time. Mixed with an aged infrastructure, it is a recipe that can lend itself to having these sinkholes happen."
Those depressions haven't just frustrated drivers. At moments, they have nearly swallowed them whole. In June, a police SUV in Sheridan fell into a sinkhole roughly 15-feet deep. The officer inside managed to escape through his car window and only sustained minor injuries.

Randy Mourning, Director of Public Works for Sheridan, says that particular sinkhole appeared when a storm drain failed beneath the roadway.
"The storm that proceeded that was so great that it created more pressure than the drain was able to handle," he said. "The pressure blew it out at a transition in the pipe's line size."

In Colorado Springs, Farkas has had to divert resources away from planned maintenance projects to fix sinkholes that have blocked traffic or flooded streets, the latest of which appeared on Airport Boulevard on Monday.

The sinkholes are a distraction from a long list of basic road maintenance issues in Colorado Springs after a rough pothole season earlier this spring. Farkas hopes to tackle the problem by repaving roads, but has said that his staff is hopelessly backlogged. Even without any further street problems, he estimates it would take 67 years to repair all city roads.

"We try to come up with a good schedule and a good plan for projects for the summer," he said. "Unfortunately, sometimes mother nature wins."
CPR thanks our sponsors.Become a sponsor

We hope this comprehensive and convenient non-partisan guide will help you make sense of a lengthy ballot in a crucial election. Take a closer look at: