Colorado's appetite for lighting up requires a lot of lights, it turns out.

Licensed marijuana growers traditionally cultivate their products indoors under very bright lights that suck a lot of electricity. With the release of the federal government's Clean Power Plan looming, cities across the state are working to reduce their carbon footprint. Part of those efforts include persuading grows to reduce their power consumption.

Between 2012 and 2013, the latest data available, electricity use increased by 1.2 percent across the city and county of Denver. Commercial marijuana grows were responsible for nearly half of that uptick.

"We’re very keen to see what is increasing energy use, and to have half of that coming from the grow industry is definitely something we pay attention to," said Sonrisa Lucero, a strategist for the Denver's Office of Sustainability.

Denver marijuana grows used just 1.85 percent of the city's overall electricity in 2013. But any uptick matters because the city set a voluntary goal to prevent total energy consumed from rising past its 2012 use levels. Lucero’s job is to make sure that energy efficiency is top of mind for new residents and businesses.

The city is working with marijuana grow operations to lower their electricity use. Or the industry may sort itself out: A growing number of outdoor and greenhouse grow operations in Colorado are emerging that could make indoor grows obsolete -- or at least, less cost effective.

To understand just how much energy it takes to grow marijuana indoors, look no further than Colorado Harvest Company's Flower Room No. 1.

The room has dozens of green plants thriving underneath 22 1,000-watt lamps hanging from the ceiling. Each is the size of a small card table. An air-conditioning system prevents the lights from overheating.

"Running a cannabis company with indoor production means that you’re going to use more than your fair share of electricity," said Tim Cullen, the company's owner.

Cullen's monthly electricity bill for the 10,000-square-foot warehouse runs a cool $12,000. Another marijuana grow reports spending nearly twice that amount. Cullen said he's tried to reduce electricity use by using LED lights currently on the market, but they haven't produced the results he needs.

"We just can't suffer the losses of having a lower energy bill, but then not producing flowers," he said. 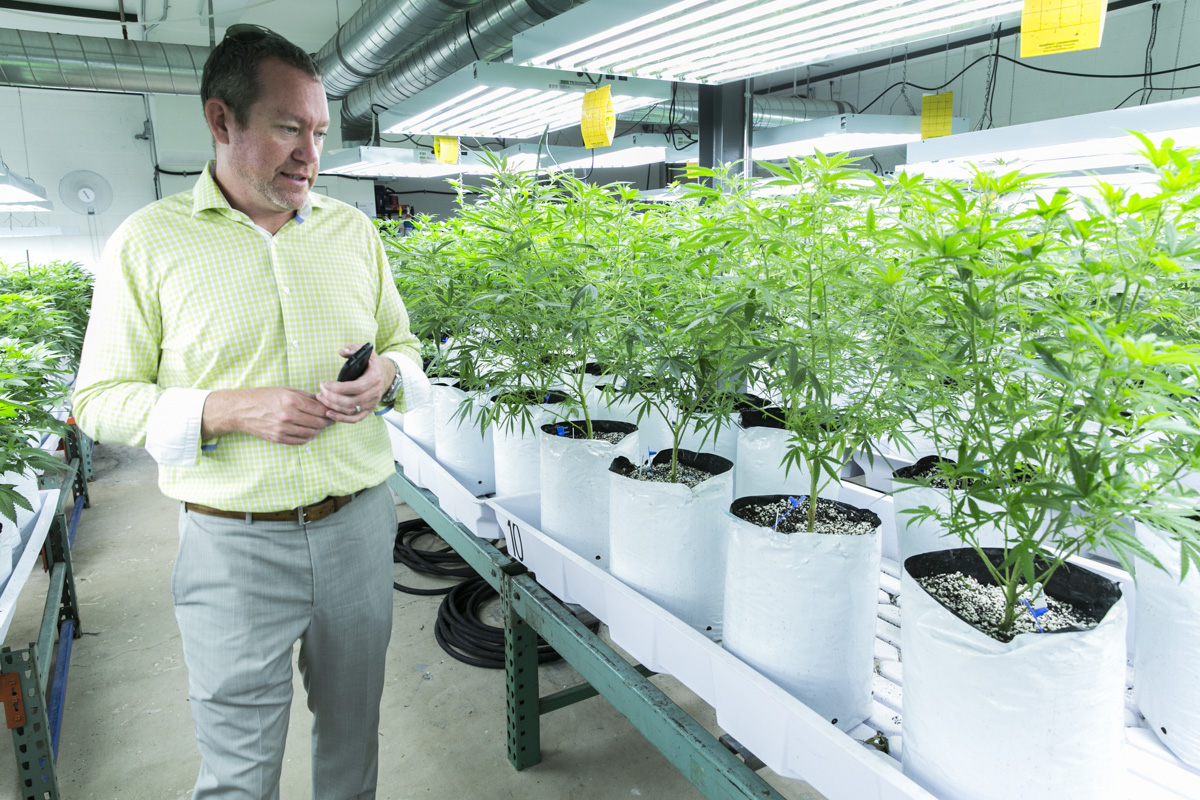 (Nathaniel Minor/CPR News)New LED technology under production could change this picture. But Cullen isn't waiting for that to happen. Instead he's building a greenhouse in Denver to commercially grow marijuana. From start to finish, the planning and construction is expected to take about six months.

Denver has about four commercial marijuana grow greenhouses. But Pueblo is leading the charge in the state, with 16 and counting. Some are small, but others cover as many as 50 acres.

Chris Markuson, director of economic development and GIS for Pueblo County, said shifting priorities are changing how and where marijuana is grown.

"At first the assumption was that the grow operations had to be tightly secured and hidden from public view," he said. "Because the temperament of the community--and the society as a whole--has come around a little bit, the grow operations are not really seen with negative light. At least they're not in Pueblo."

It helps that Pueblo has marketed itself as a business-friendly lower-cost location to cultivate marijuana.

Energy use in the area is evolving with the industry. According to Black Hills Energy, which provides power to the city of Pueblo and parts of Pueblo County, 10 grow facilities used 2.1 million kWh in 2014. That's 0.1 percent of the energy that Black Hills delivered to its Pueblo coverage area.

As the marijuana industry evolves, Colorado cities are deciding how--or if--they want to manage the growing energy demands from the industry.

Denver isn't considering regulations for the marijuana industry, but pushing LED lights to grows. In Boulder, the city and county are setting measures to require businesses offset their electricity use via subscription of renewable energy credits -- things like community solar garden memberships.

Xcel is reportedly working with marijuana growers to update lighting so they're as energy efficient as possible.

"We can have that economic growth without electricity use increasing," he said. "That's going to be beneficial economically and that will help us achieve our environmental goals."

Denver and Boulder's work with marijuana and other businesses could be a good warm-up lap for what's to come. The Clean Power Plan rule, expected to be finalized later this summer, will put even more pressure on states to reduce carbon emissions. Some of that reduction will come from changing where our power comes from. But Geller expects another significant portion to come from things like switching out the lightbulbs.

"Energy efficiency is a strategy that can be implemented very quickly in terms of ramping up rebate and financing programs, education efforts," said Geller. "Whereas building new power plants--or retrofitting old power plants--that kind of initiative will take years to implement."