As state and federal officials engage in a public disagreement about the health of the Animas River and when it should reopen after being polluted with 3 million gallons of gold mine waste, jurisdictions downstream are preparing for the effects of the toxins.

The waste initially flowed into Cement Creek, a tributary of the Animas, and the Environmental Protection Agency has ordered the Animas and San Juan rivers closed to recreation, irrigation and drinking water intakes until at least Aug. 17.

The Colorado Department of Public Health and Environment has posted guidelines urging people to avoid contact with the water in Cement Creek, as well as any orange sediment downstream. But late Wednesday it gave the all-clear for Durango to start drawing and treating water from the Animas again.

“We are working with affected systems to increase sampling and monitoring,” said state health department chief medical officer Dr. Larry Wolk. “Water quality could change due to storms or other conditions, and we will respond quickly to any potential issues." 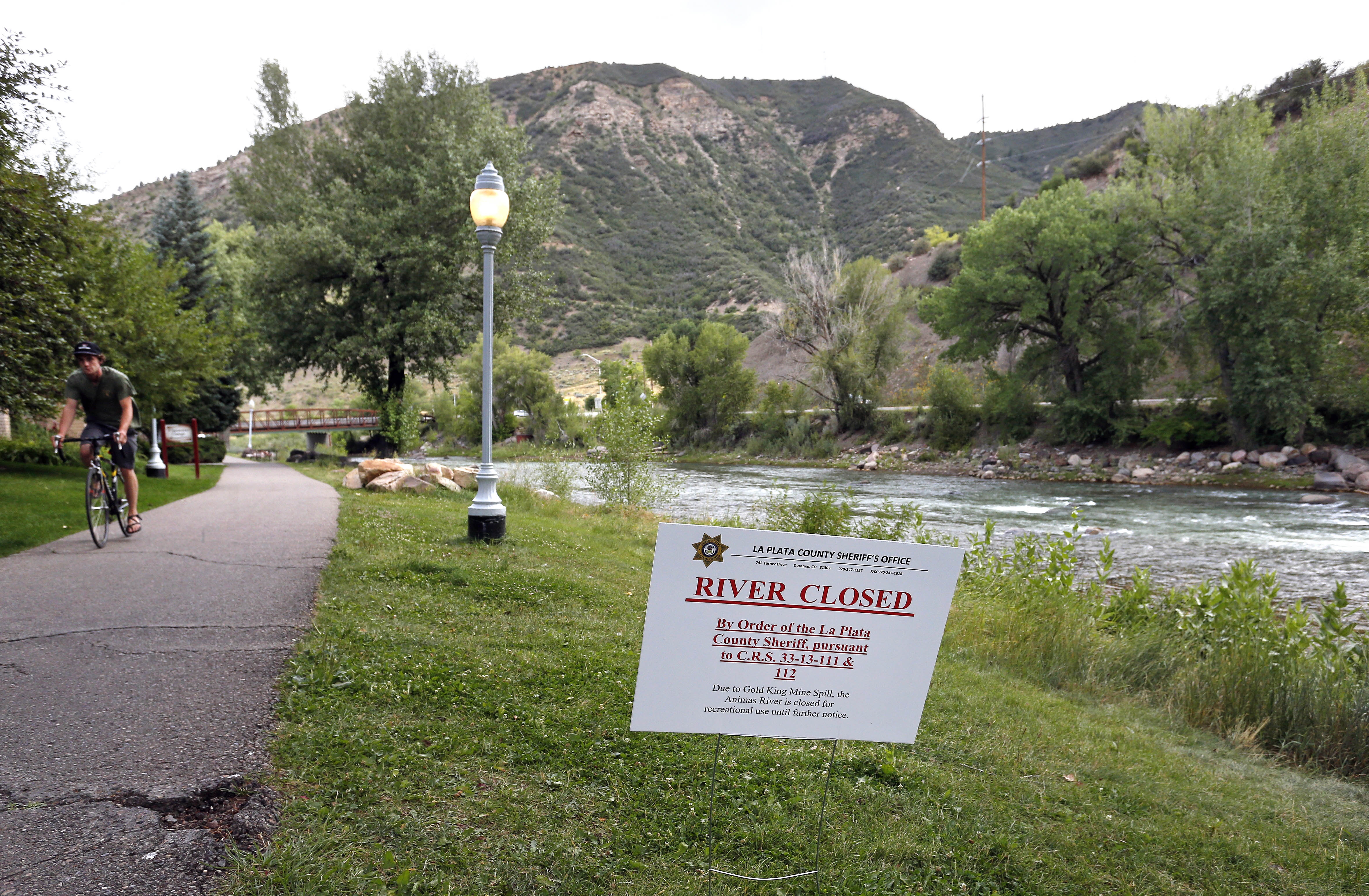 (Brennan Linsley/AP)Earlier, Gov. John Hickenlooper said he wanted the river opened much sooner than the EPA ruled. The EPA, which has built settling ponds to catch waste from the mine entrance high in the mountains, is still testing the water, and agency administrator Gina McCarthy visited Durango Wednesday and said her agency planned to "let science be our guide" in responding to the disaster.

"The very good news is that the data so far is showing that water quality does restore itself to its prior condition," she told reporters in Durango.

She reiterated that her agency takes responsibility for the spill, which was set of by EPA workers and contractors checking on the Gold King Mine. And she said the agency has suspended similar maintenance work around the country while the "root cause" of the spill is investigated, "unless there is imminent risk in a specific case."

"We also are instructing our regions to identify existing sites with similarities to the Gold King Mine site and to identify any immediate threats and consider appropriate response actions," she said.

Colorado wildlife officials also said they plan to test more than 100 fish caught along the Animas at the height of the spill.

Parks and Wildlife spokesman Matt Robbins said Wednesday that biologists in Denver will determine whether the spill's heavy metals accumulated in those fingerling trout. Results won't be known for at least two weeks. Of the 108 fish placed in underwater cages during the worst of the spill, only one died. It's unknown whether the death stemmed from pollution or other reasons.

The drive to open the Animas derives from the key role it plays in the region's economy. The river supports agriculture, recreational rafting and fishing, and the local drinking water supply. Roger Zalneraitis, executive director of the La Plata County Economic Development Alliance in Durango told NPR:

It's been a shock for everybody here, as you can imagine. There's been a very strong emotional response from our community. Businesses have been affected in various ways, some not at all. Some have closed, clearly. If your livelihood is on the river, you are temporarily shut down right now. And hopefully, they will be receiving some assistance and can weather this through and get open to take advantage of the remainder of the summer season.

The mine waste first spilled into Cement Creek last Wednesday, and then moved into the Animas, which drains into the San Juan in New Mexico. The San Juan in turn empties into Lake Powell along the Utah-Arizona border.

McCarthy plans to visit Farmington, New Mexico, on Thursday. There, Gov. Susana Martinez says she still has concerns about the federal government's response to the spill. The New Mexico Environment Department has been conducting its own sampling along the river and results are expected Wednesday.

Hector Balderas, New Mexico's attorney general, says communities affected by the contamination have anywhere from seven to 50 days of drinking water in storage tanks and reservoirs. His office is among those pressuring federal officials to get better data and release it in a timely manner.

Further downstream, the Navajo Nation is also coming to grips with the situation. Farmington Chapter President Chili Yazzie Arizona Public Media that, "more than 700 farmers are now watching their crops dry up."

"That’s just absolutely devastating to our agricultural families because many do rely on farming for their livelihoods," Yazzie said. The Navajo are also feeling a sense of deja vu, Arizona Public Media reports. Navajo Vice President Jonathan Nez says the situation is similar to the problems caused by "more than 500 abandoned uranium mines on tribal land."

Navajo Nation President Rusel Begaye plans to take legal action against the EPA.
"They are not going to get away with this," he said. "The EPA was right in the middle of the disaster and we intend to make sure the Navajo Nation recovers every dollar it spends cleaning up this mess and every dollar it loses as a result of injuries to our precious Navajo natural resources."

"I have instructed Navajo Nation Department of Justice to take immediate action against the EPA to the fullest extent of the law to protect Navajo families and resources,” Begaye said.

The waste hasn't arrived at Lake Powell yet, but it will be further diluted in the massive body of water when it does, the Bureau of Reclamation says. The reservoir on the Utah-Arizona border holds about 4.2 trillion gallons of water, dwarfing the spill.