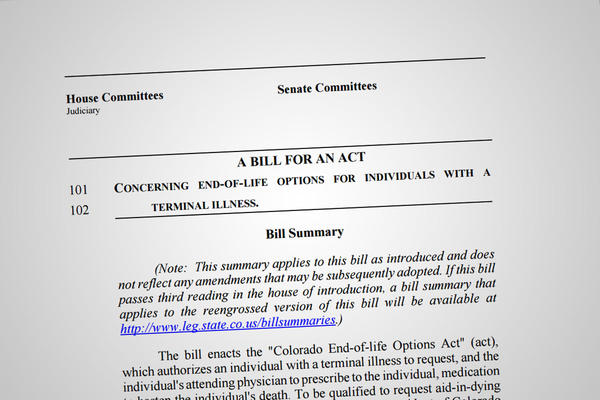 A bill that would have allowed terminally ill patients to take medication to end their own lives has failed in the Colorado Legislature. The main sponsors asked lawmakers to defeat the bill before it could be debated by the full House.

"The choice we made today, was to give you the relief from having to have this conversation because we know many of you have deeply held convictions that make you uncomfortable with this bill," said state Rep. Lois Court (D-Denver). "We are doing you this favor, to not have this debate, but make no mistake the voice of the people of this state will be heard."

Court decided to pull the bill on the morning of the debate when she realized she didn't have the votes to pass it in the Democratic controlled House. She also wasn't happy with some of the amendments she thought would be added to the bill.

The decision surprised many of her colleagues who were anticipating a lengthy floor discussion. One lawmaker had rescheduled a bill to be heard in committee to a different day to accommodate the debate; another had invited a special guest who supported the end of life bill to hear the floor discussion in person.

Sponsors of an end of life options bill are proposing to kill the bill. It's on the full House floor.#coleg #copolitics— Bente Birkeland (@BenteBirkeland) February 24, 2016

While it's common for lawmakers to delay contentious measures on the calendar, it's rare for a member to outright kill their own bill before a floor debate. As she was doing so, it was clear from the tenor of her voice that Court wasn't happy with some members of her own party.

It's the second straight year that Court and Ginal have sponsored the bill. In 2015 it failed to pass its first committee.

Rep. Court "The choice we made was giving you the relief from having to have this conversation. We are doing you this favor."#coleg— Bente Birkeland (@BenteBirkeland) February 24, 2016

House Bill 16-1054 [.pdf] would have allowed patients with a diagnosis of less than six months to live to take life-ending medication. Two physicians would need to approve the medicine, and the patient would need to be mentally competent to make the decision and administer the drug.

Lawmakers in both parties have strong opinions on the proposal. While the debate doesn't fall entirely along party lines, most members of the Republican Party oppose it. The bill would have faced almost certain defeat in the GOP controlled Senate.

Some lawmakers were also worried about taking a tough vote in a political election year for a measure they felt would ultimately fail. Currently four states, Oregon, Washington, California and Vermont have right to die regulatory frameworks in place. Backers of a bill allowing euthanasia hope to get that measure on the ballot in Colorado for the fall 2016 election.