​John Teff recently found himself in front of Colorado's nine oil and gas commissioners, the final arbiters of punishment in the industry. And Teff, who owns CM Production, says he couldn’t contain his frustration.

“I’m not the only frustrated operator,” Teff said. ”There’s many small operators that are flat irritated with this system.”

He'd just listened to regulators from the Colorado Oil and Gas Conservation Commission make their case that he had repeatedly failed to comply with orders to clean up his drill sites including issues like oily soil and improperly maintained water pits. They said he failed to pay past fines or post required bonds. They argued he shouldn’t be given anymore “second chances.” And they proposed taking away his right to drill and pay total fines of more than $700,000.

“We have no ability to pay these huge, astronomical fines,” Teff said in response.

He claimed the fines are part of an effort by regulators to put small drillers like him out of business and that the COGCC wouldn’t work with him, not even returning his calls. But he did not bring an attorney to the hearing and failed to present any case before the commission that he followed the COGCC’s rules. The commissioners unanimously ruled against him.

Later, at his Lakewood office, Teff was upset.

“I think the commission recognizes that we’ve got limited funds, and they’ll target us to make examples out of us, until they run us out of money.”

And money is especially tight in the energy business these days, as prices for oil and gas have plummeted.

A review of data by CPR found it is true that the smallest operators are the ones absorbing millions in penalties. Even industry insiders have never heard of some of these companies. Here's what those fines look like: 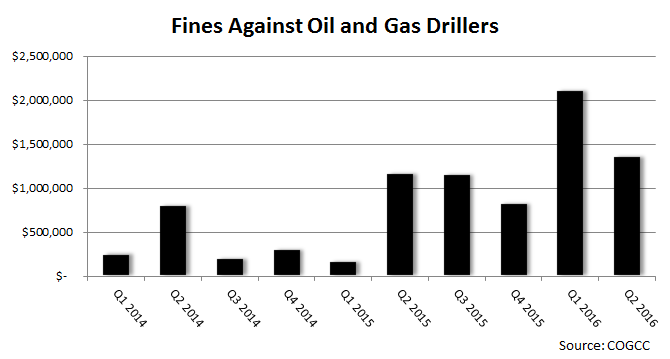 Contrast that with a company like Anadarko, Colorado’s largest oil driller, which produced 40 million barrels of oil just last year, paid less than $40,000 in fines. BP, one of the largest natural gas drillers in the state, paid $32,500.

But is that evidence that regulators are targeting small companies, as John Teff of CM Production alleges?

It’s also true that the state has added nine inspectors, and beefed up its legal staff, which has led to finding and prosecuting more cases. And a sea change came in 2013 when state lawmakers increased maximum penalties for the first time since the Eisenhower Administration.

State Rep. Mike Foote, a Boulder County Democrat, helped lead that effort, responding to outrage from his district against the industry. Foote says Colorado’s drilling rules are tough for a reason.

“They’re there because they’re supposed to protect the health and safety of Coloradans,” said Foote. “And if a small operator or a big operator, or someone in between violates the rules they should be dealt with the same.”

But small operators like Teff say regulators have become too aggressive. In some cases, the state is taking away the right to drill if operators are deemed “repeat offenders.” Colorado’s chief oil and gas regulator, Matt Lapore, says that observation has some truth to it.

“Perhaps we didn’t take these to the final conclusion that we’re taking them to now, which is, ‘yes, indeed we are going to impose a penalty that’s very large.’”

Lapore is quick to point out that drillers are given time to clean up the mess. In some cases, penalties are suspended if an operator does what they’re told, and Lapore adds that large companies tend to be proactive about reporting and fixing problems.

Surprisingly, the drilling industry supported the bill that toughened penalties, primarily because it was hard to argue for fines that hadn’t increased in half a century.

But he still doesn’t want to see small drillers go out of business, because they perform an important function; whether it’s cleaning up abandoned wells or even pioneering new locations.

Teff with CM Productions is not sure if his company will survive the fines. But he is sure he’ll never buy an oil well in Colorado again.