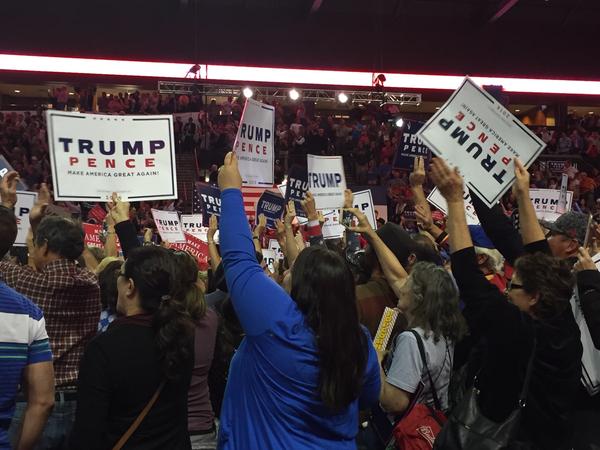 Bente Birkeland / KUNC/KRCC Trump supporters at a rally in Loveland on Monday, Oct. 3, 2016 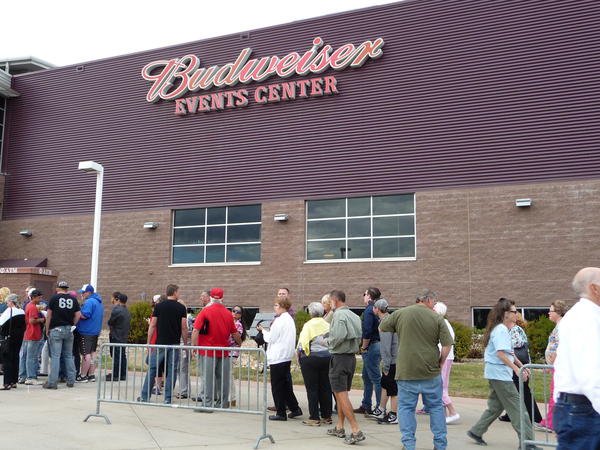 LOVELAND, Colo. - Ashley Harrison held her baby son in a sling as she stood in line for the Donald Trump rally on a windy but warm fall day in Colorado. She’s a part owner of two 7- Eleven stores in Windsor and Milliken. She thinks Trump would give them tax breaks.

“You know all the support small business can get is the best because those are the job creators,” she said before Trump’s rally at Loveland’s Budweiser Events Center “We just really hope that we can get a conservative in office because that brings back our freedoms, and that’s what America is built on and you know: less government is better.”

Harrison was one of thousands who lined up to see Trump speak on Monday afternoon as the Republican nominee for president stopped in Northern Colorado and, before that, Pueblo. By the time he took the stage in Loveland, he defended his taxes, which dominated headlines all day.

“It’s something I’ve been talking about for a long time despite being a very big beneficiary I must admit,” Trump said of the country's tax system.

A New York Times report over the weekend said the real estate mogul may have legally avoided paying taxes. Trump said it was his fiduciary responsibility to his business and family to pay as little in taxes as possible.

“I understand the tax laws better than almost anyone," he told the crowd.

The Atmosphere Outside The Rally

Before his arrival in Loveland, the mood was laid back, with people selling home-printed T-shirts and buttons. Taylor Swift music blared over speakers and some with the Trump campaign asked rally-goers to sign up to volunteer for Trump’s Colorado effort. Trump and Democratic nominee Hillary Clinton are running near even in Colorado, according to an aggregation of polls by Real Clear Politics (as of Oct. 2).

But the day began with two new polls taken since the first presidential debate. Both showed Trump far behind Clinton in Colorado, including one from Monmouth University, showing Trump 11 points down.

Colorado State University student Connor Deharr was in line with his parents. He’s graduating in two years and is concerned about the future of the economy he’ll be trying to find a job in. But he dismisses reports that Trump may not have paid income taxes for the majority of Deharr’s lifetime.

“I think he made smart moves if he used the tax code to get out of owing taxes in my opinion.”

Deharr said he’d like more details about Trump’s plans for the economy and trade and less name calling in the next presidential debate: “I feel like not casting your vote for either Trump or Hillary is going to be wasting your vote.”

That feeling was echoed a few hundred yards away in the area cordoned off for the 19 or so Trump protesters.

“He’s mean, he’s small minded. People keep telling me that if I don’t vote for either one of them then it’s a vote for him,” said protester Judy Lantry.

She’s an independent who doesn’t like Clinton. But she said Trump scares her: “So I might have to break down and vote for her.”

Holding a homemade sign reading, “Love Trumps Fear,” Chris Davis stood nearby. In his role as a Lutheran pastor in Loveland, he thinks it’s important to show that there are Christians who will not for Trump.

“I would hope that a person of faith, I would hope that their actions would speak differently, in a more kind way, in a more loving way,” Davis said. “From the way that we are talking about refugees is very concerning. It seems to be running completely counter to the gospel message and to who we are as Americans.”

Davis said he’ll vote for Clinton. He does not like the tone that Trump and his supporters have taken with her.

“You know when we hear about the lies that Hillary tells the scandals that she’s supposedly been apart of a lot of that has been dismissed,” he said “A lot of that falls under the hateful speech about women and a lack of trust that we have in anybody other than the white male power structure that has existed.”

Inside The Loveland Rally

Trump spoke for about 50 minutes after an introduction from former Denver Broncos and Washington Redskins coach Mike Shanahan. Trump tailored parts of his message to Northern Colorado and the oil and gas industry that is a staple of the economy. He said he opposes “Hillary Clinton’s war on Colorado energy,” and that he strongly backs fracking in the state: “That’s a lot of jobs and when we want to compete with other countries we better not think that way because we are losing big league.”

Evie Carey, a first-time voter from Laramie County Community College, said she does not view Trump as a politician. She hopes he will squash criticisms that he’s anti-women in the next presidential debate.

“I think most of the things he’s said against women are against specific women, and not against women as a whole,” said Carey. “So I don’t think he’s misogynistic.”

Sherry Viani is a mother who drove up from Castle Rock. She voted two times for President Barack Obama and likes Trump, but says his style needs some work. She doesn’t like his late night tweets and some of his rants.

“When somebody says something he pokes back," she said. "We’re not used to that in the political world, but that tells me he’s going to fight, so I don’t think he can be rolled over easily.”