Denver’s B-cycle bike sharing program hit a bit of a road bump in 2016, when it attracted fewer riders for the second straight year.

"We don't see it as a negative thing to run a deficit,” Bohnenkamp told CPR’s Mike Lamp. “We just can't run a deficit in too many years.”

The shortfall was the result, in part, of B-cycle’s decision to pay cash for a new station at downtown Denver’s Union Station. The bike hubs are usually bankrolled by grants or developers, Bohnenkamp said. B-cycle hopes the new station, in addition to another one nearby, will help drive up revenue and ridership down the road. 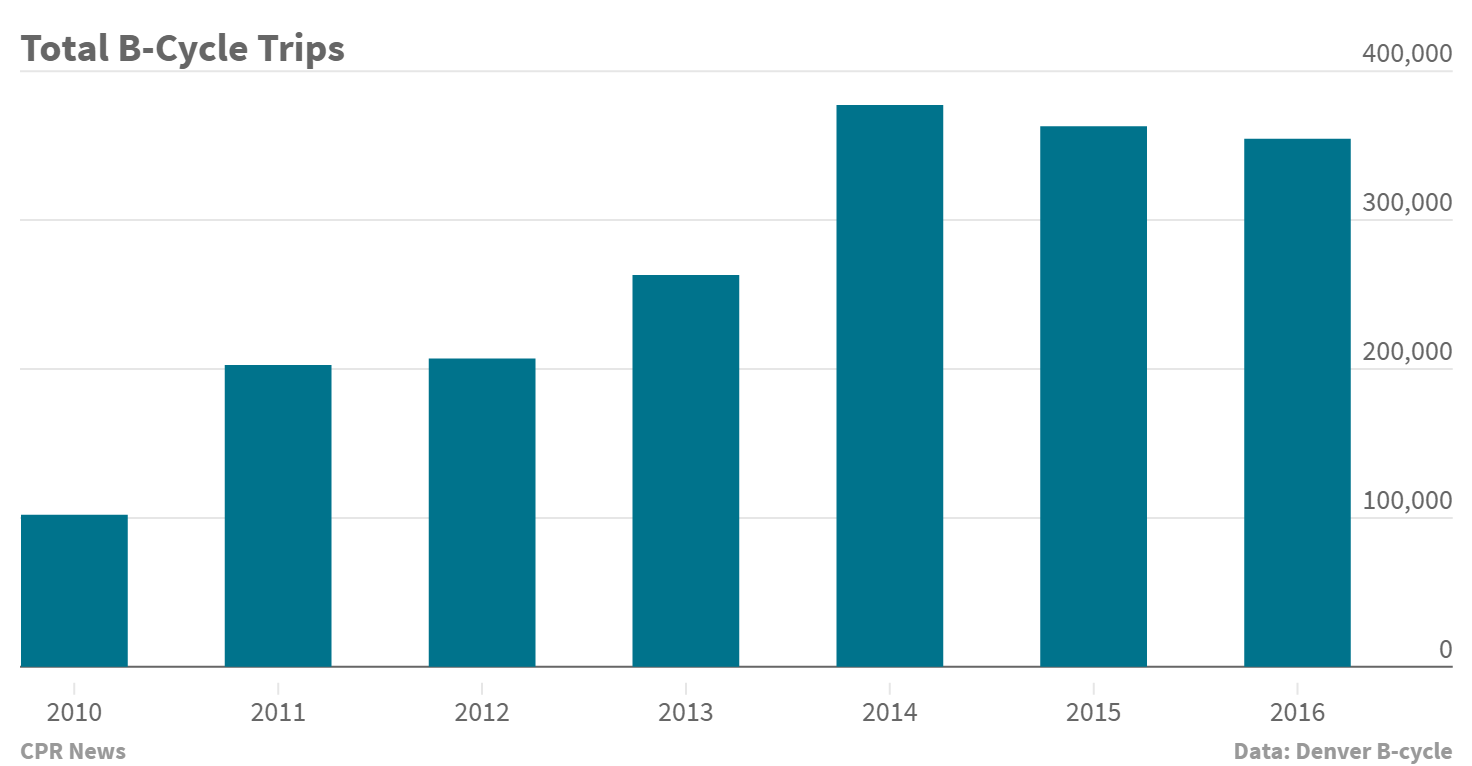 Bohnenkamp put a positive spin on the modest decline, saying ridership was in the same range as previous years. He also pointed to variables like the weather and tourist events.

B-cycle By The Numbers

Bohnenkamp would like to expand service, both in density and geography, but the organization doesn’t have the funding to do that in a major way. Funding primarily comes from user fees, grants and corporate sponsorships.

A new station runs about $60,000 and each bicycle costs about $1,100, Bohnenkamp said. Last year’s revenues came to about $1.7 million against about $2 million in expenses.

The city isn’t likely to fund a major geographic expansion anytime soon either, despite indicating an interest last year. That's in part because basic bicycling infrastructure like lanes and bridges are needed first -- especially in southwest Denver, represented by City Councilor Jolon Clark.

“If it's not safe to get on a bicycle, then having access to the B-cycle is not as valuable," Clark said.

Clark, who chairs Denver’s transportation and mobility task force, said the council’s other main concern is equity. Now, B-cycle stations are mostly located in more affluent and dense parts of the city. Expanding it to low-income, low-density places like southwest Denver would require a sizable investment first, Clark said.

In lieu of a geographic expansion, Bohnenkamp said he’s focused the organization on appealing to more potential riders. Most users fall into two camps: tourists who use a bike once or twice, and regular commuters who shell out $95 yearly or $15 every month.

A new flex pass, priced at $15 a year plus $3 per half-hour, is aimed at locals who might balk at the high up-front cost. Sales have been slow so far, with only about 800 sold.

"Not awful. But like anything, we're going to grow that market,” he said. "I think that as more and more people become aware of that product offering, we'll see more sales."

Bohnenkamp said they’ll continue to make tweaks to membership options. He added that B-cycle has firmly established itself as an important part of Denver’s transit ecosystem — so much so that it needs to replace 300 bicycles, some of which have been in use since the program launched in 2010.