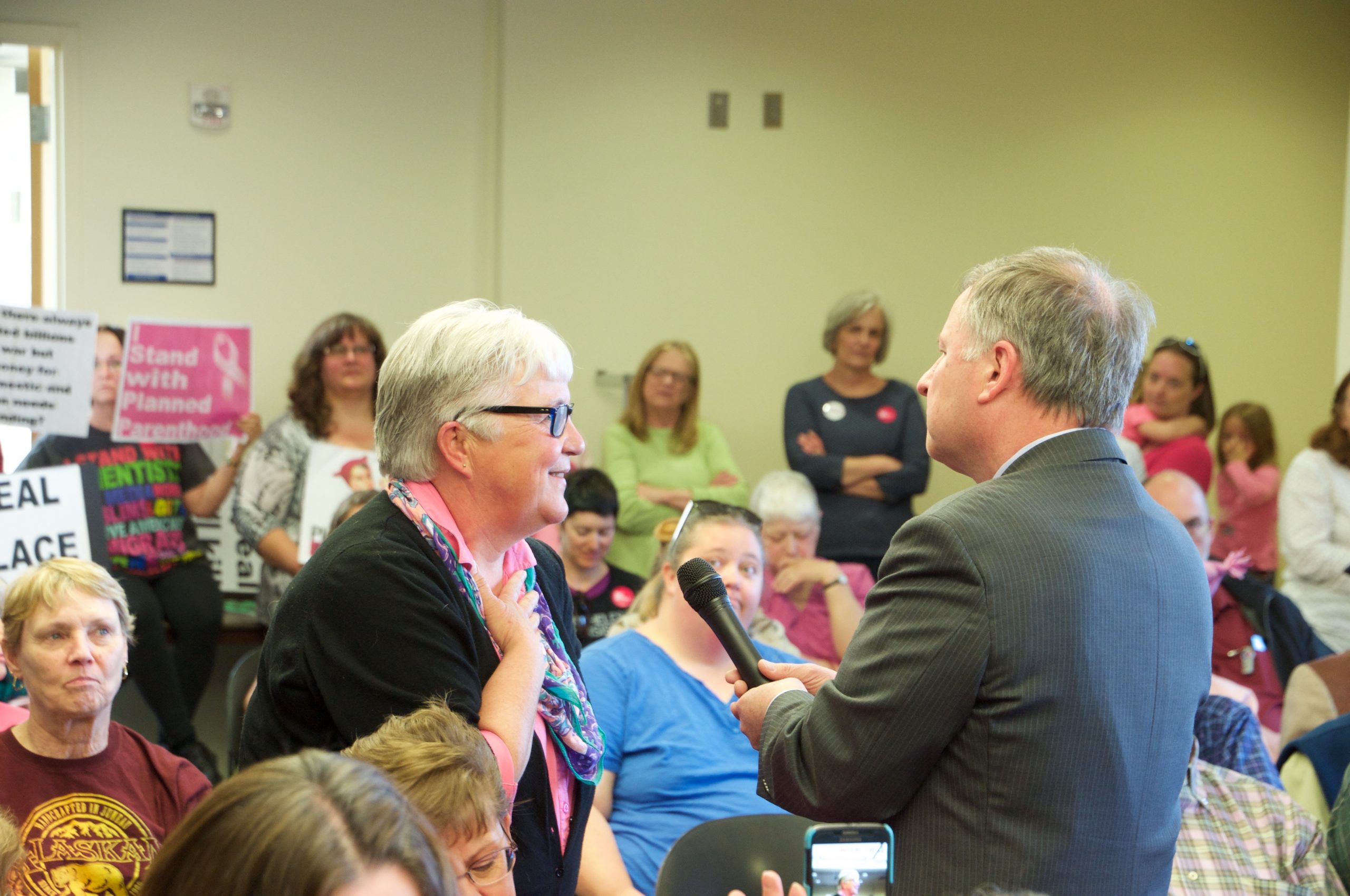 Jake Brownell / 91.5 KRCC Congressman Doug Lamborn takes a question from a constituent at a town hall meeting in Colorado Springs. 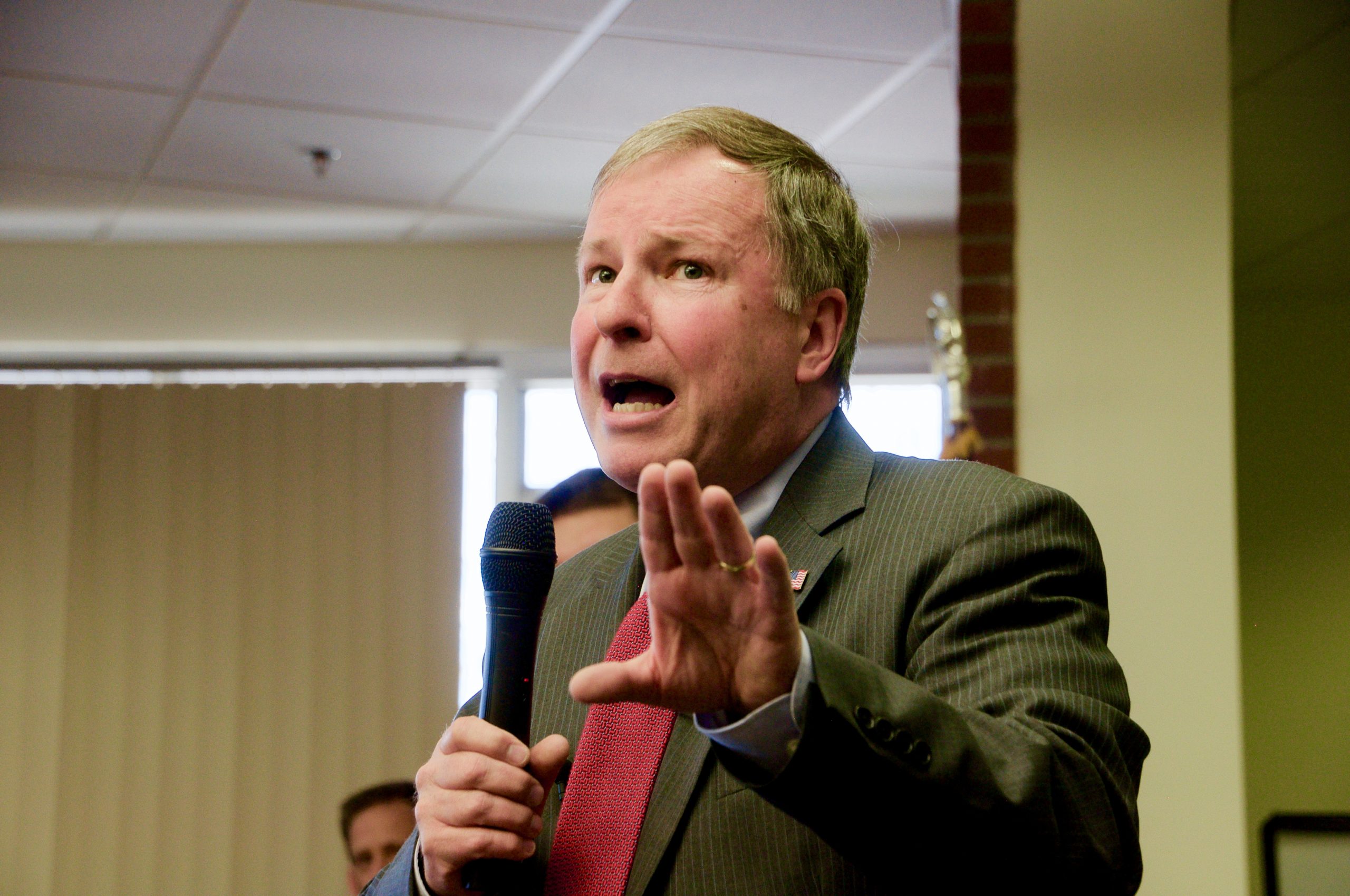 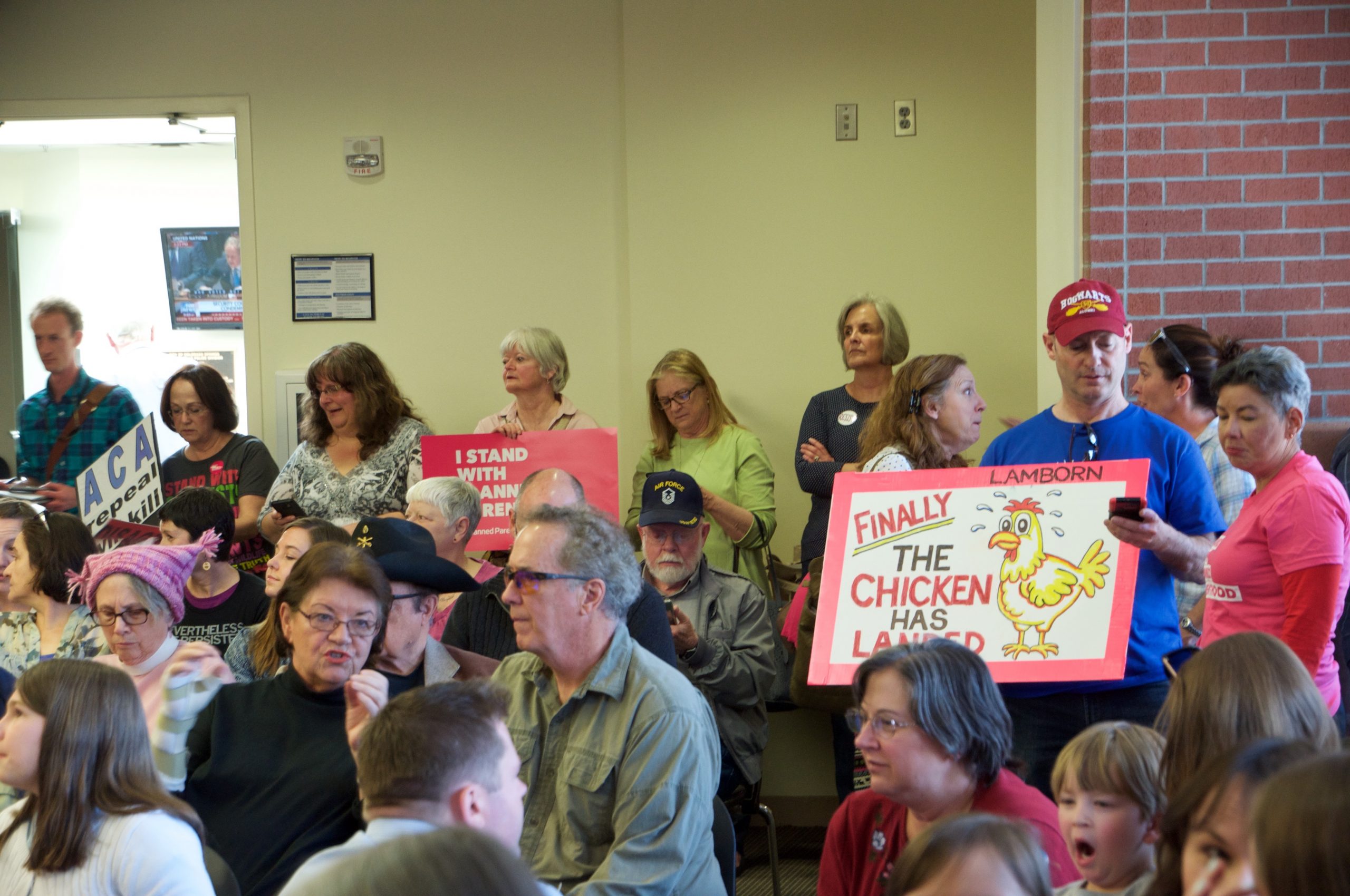 Jake Brownell / 91.5 KRCC A standing-room-only crowd waits for Rep. Lamborn to arrive at a town hall meeting in Colorado Springs. 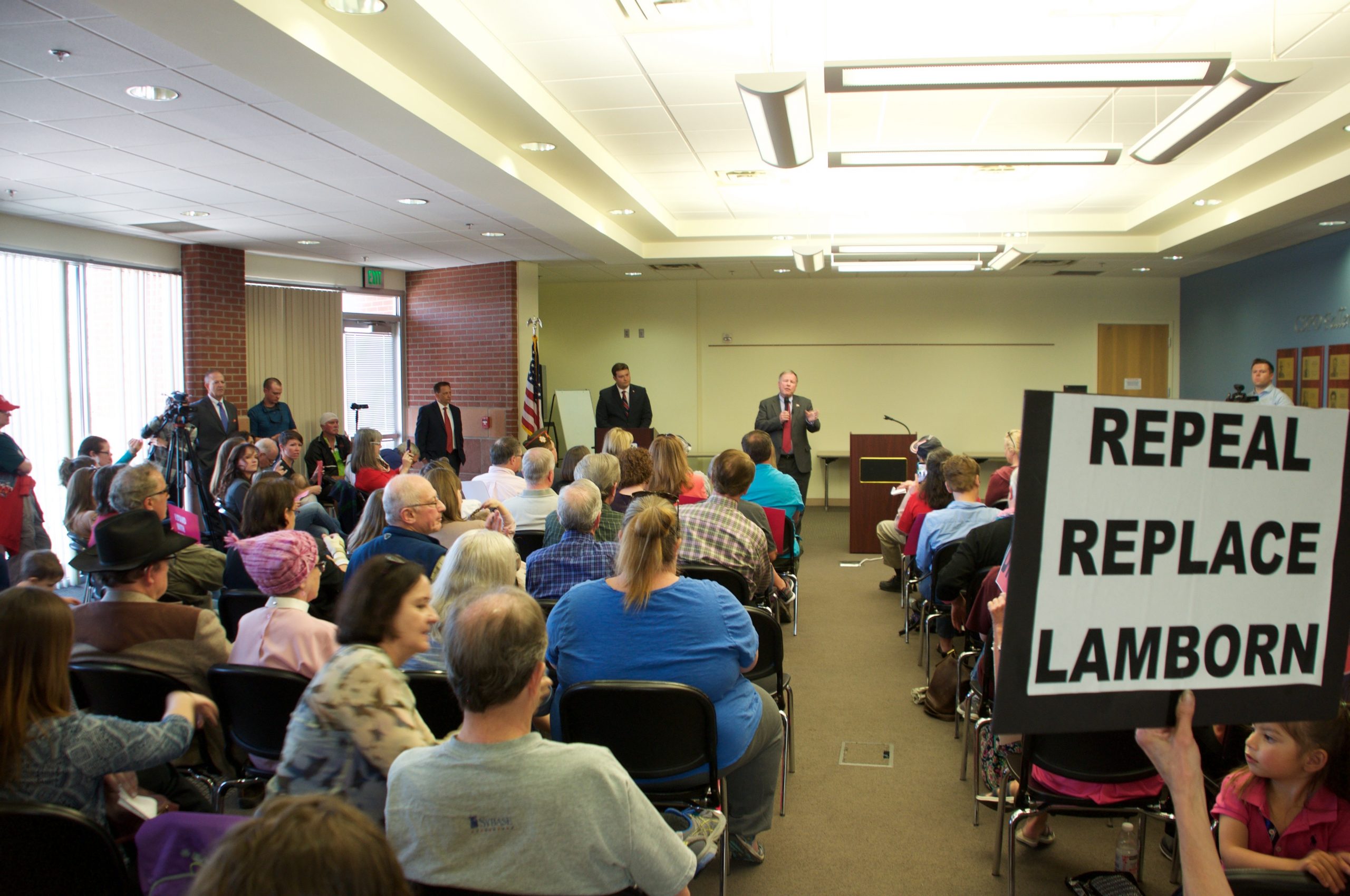 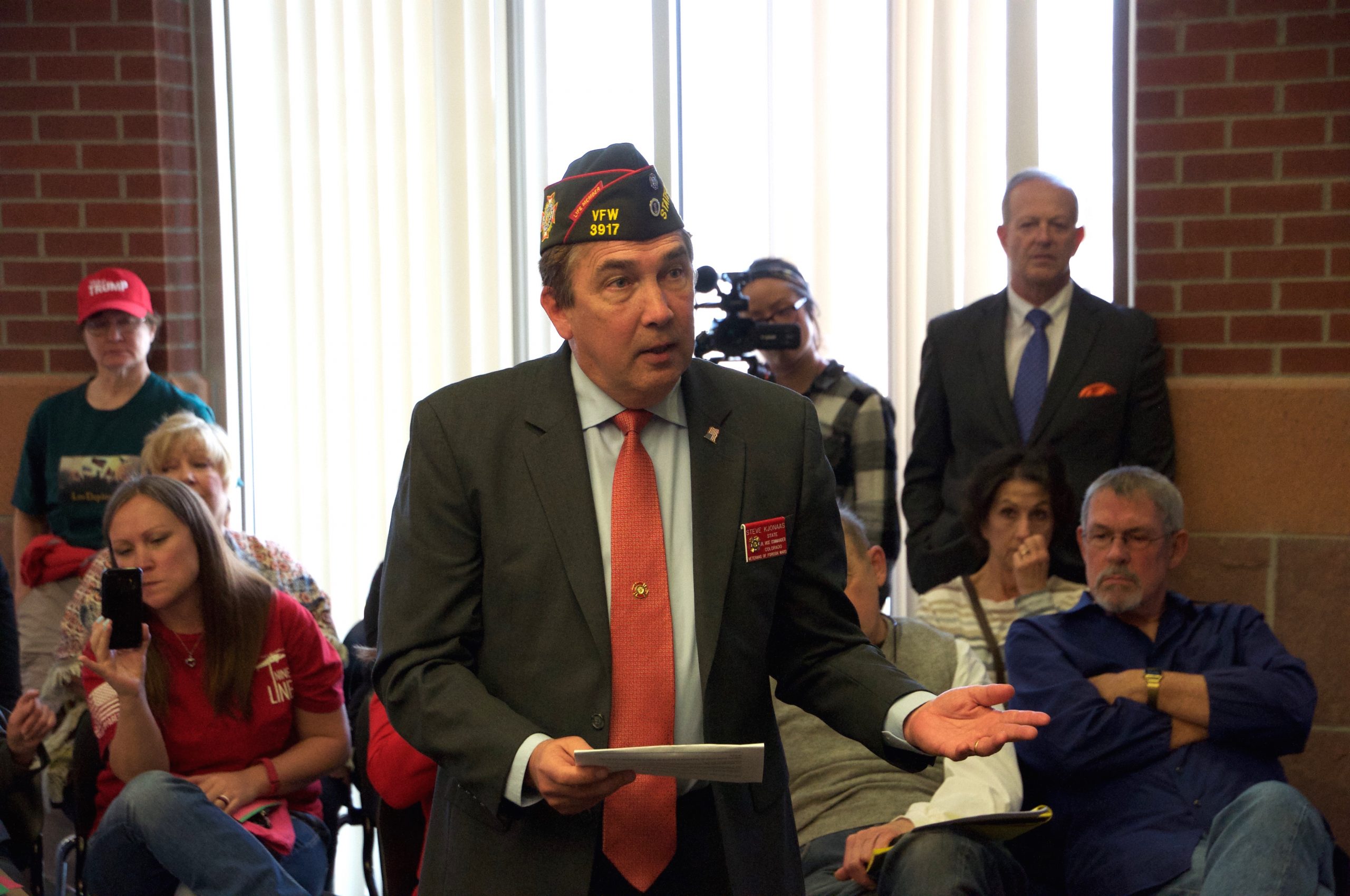 Congressman Doug Lamborn, Republican representative for Colorado’s 5th District, took questions from constituents at a heated town hall forum in Colorado Springs Wednesday. Half-an-hour before the meeting was scheduled to start, police were already turning away attendees at the Stetson Hills police substation, saying that the 110-person capacity had been met in the community room where the forum was to be held.

Inside, the crowd consisted of many protestors with signs bearing slogans like, “Repeal Replace Lamborn,” and “EPA Cuts Threaten Public Health.” As the crowd waited for Lamborn to arrive, protestor Sharon Gardner-Pashan told 91.5 KRCC that she hoped to ask the congressman about his position on defunding Planned Parenthood, and explained that she “wants to actively work to get Republicans out of our government and get Democrats in so we can get justice and some environmental help--all the things that Trump is repealing.”

Lamborn arrived shortly after 1:30 pm. He opened with brief remarks, expressing his appreciation for attendees’ “interest in politics and community and national affairs.” He gave a quick rundown of the issues he’s focusing on in Washington, beginning with the repeal of the Affordable Care Act, AKA Obamacare.

“I believe that Obamacare is failing. It is not living up to the promises for which it was tasked,” he said, before being interrupted by a chorus of boos from the audience. “There are 1000 counties in the United States out of roughly 3000, where you only have one provider to choose from under Obamacare--that’s not choice,” he continued.

Lamborn also expressed support for the recent air strike conducted by the United States in Syria in response to the use of chemical weapons by Syrian President Bashar al-Assad. “It is important to send a message that when you draw a line in the sand, and they step over it, they pay the consequences,” he said, adding, “Barack Obama did not do that in Syria.”

The opening remarks lasted roughly 10 minutes, and were followed by a 50-minute Q&A period. The atmosphere was raucous and at times contentious, as when a constituent asked, “Are you willing to stand on the floor of the House of Representatives, and call upon the president to release his 2016 tax returns?”

During the hour long meeting, Lamborn also addressed topics of overlapping local and federal interest. Among them, the matter of a lawsuit filed by the EPA against the city of Colorado Springs for violations of the Clean Water Act related to the city’s storm water system.

In one exchange, a young girl identifying herself as Haven asked Lamborn whether he would support connecting veterans with jobs in renewable energy after leaving the military. She then invited the congressman to attend a presentation she’ll be giving to her science class next week on climate change, which elicited howls of approval and extended applause from the crowd.

In response, Lamborn touted his record supporting programs to connect veterans with employment opportunities, and said he supports an “all of the above” energy strategy. It was not immediately clear whether he’d accept the invitation.

Speaking afterward, Lamborn told media that he didn’t mind the protests and heated exchanges, describing it as “democracy in action.”