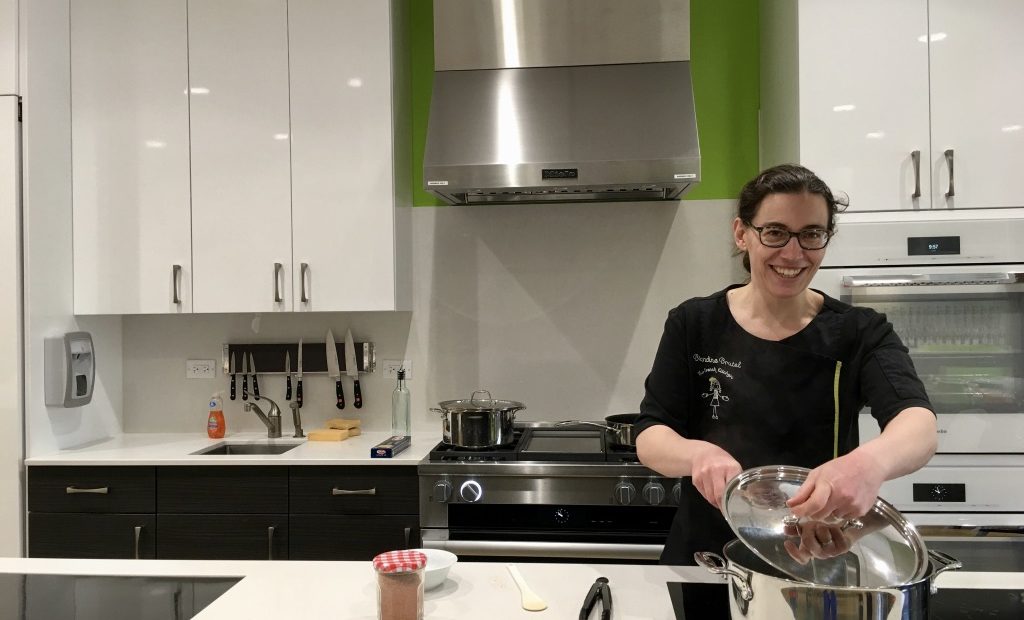 Blandine Brutel, owner and chef at The French Kitchen, moved from Grenoble, France to Colorado Springs in 2008, and within a few years the self-taught chef began to offer in-home cooking classes to small groups. Just a few months later Brutel proceeded to launch her own French culinary center in May 2012 with a focus on her favorite food, desserts.

The concept to establish a brick and mortar for her growing venture has been a couple years in the making and as of June 23, The French Kitchen held their grand opening. The new bistro gives Coloradans a taste of Paris with an opportunity to visit what feels like an authentic French cafe.

A large Eiffel Tower replica greets patrons as they enter, spiraling through the center of the cafe with simple, colorful chairs and tables that surround the mini monument. A glass case boasts a full assortment of French pastries and sandwiches with a list of drinks posted above, that feature illy coffee. Typical items like the tartine, quiche Lorraine and croque monsieur are on display alongside the staple salad (Brutel’s husband’s family recipe) made of cabbage, walnuts and bacon tossed in a homemade vinaigrette.

“I don’t have a food menu because what we make is what you see here,” says Brutel. “Just like in France, you walk in a bakery, you see what’s in the case and you say you want that, that and that.”

Brutel and Sebastien Mullebrouck, baker/pastry chef, whom she met through the local French group nine years prior, arrive each morning at 3:00 a.m. to start their day. The process of cultivating their baked goods and other handmade pastries proves to be arduous made with very specific sensibilities.

“A baguette is supposed to be smaller,” says Brutel. “It’s not the long, big loaf. “The whole tradition in France is only four ingredients: flour, yeast, salt and water. And it has to be made by hand, not a machine. We use a sponge to start, so we feed that every day to make it better and better. The crust on the outside, the holes inside, the flavor…we make it fresh every night.”

Brutel holds fast to the integrity of her native cuisine and although she will entertain additions and some variations to please customers, she stays true to what is French. Naturally, a variety of croissants are available, but Brutel offers an array of sizes in small, medium and large.

“This way everyone can find their own way,” says Brutel. “A lot of people tell me that you have to Americanize things otherwise it’s never going to work. I’m like no, I’ll do some things like a carrot cake or cinnamon twist, so we do have those. It’s not my favorite, it’s not French.”

The traditional baguette typically sells out by the end of each day and Brutel teaches a class on a particular type “that everyone can make it in their own home.” Brutel hopes to bestow successful recreations, whether it’s bread making or the very popular crepe class (which are gluten and dairy free). Although Brutel does not extend her 50 plus classes to include pastries, particularly croissants, for good reason.

“Usually when I teach a class I like for you to be able to reproduce it,” says Brutel. “I feel if I teach you a croissant class you will either not do it or not reproduce it well and then that’s going to bug me because that’s not my goal.”

The teaching kitchen is full of light and immaculate with quartz countertops that raise up and lower from 36 to 26 inches high to accommodate for children’s classes. The whole of the space, cabinets to appliances are all by donation courtesy of local remodeling company, JKC Design Co. and German brand, Miele.

The French Kitchen also contains a boutique that sells French syrups, Belgium kitchen gadgets, chocolate, condiments and their proprietary flour blend that is unbleached and unbromated. It contains less gluten than typical store-bought brands and has a higher iron content. Brutel also carries a particularly creamy, European butter that they use in the croissants and on the sandwiches. “It’s better than Kerry Gold,” says Brutel. “It’s not just something on bread, it actually has a flavor. There’s something to it that I really like.”

Simplicity and richness are elements that Brutel has built her palate around which lends itself to what most chefs contend with. It doesn’t need to be complex to be delicious. In fact, the contrary is usually the golden rule most culinarians subscribe to.

“I like things simple but tasty,” says Brutel. “A lot of times you say, a sandwich has to be good if it has so many layers. No. We do one that’s just ham and butter. That’s it.”

Known as a Parisian, the straight up combo is customary in all French bakeries. It encapsulates the same idea as our glorified grilled cheese and that’s become a festival-spurring entree.

“It’s like a standard,” says Brutel. “If you have the right ham, the right butter, the right bread, you put them together, the right amount and then it’s like, ah. When you do it right, it can be amazing.”

Brutel is not about frills in any case and strays away from advertising The French Kitchen as somewhere to find specialty items, like elaborate wedding cakes.

“Decoration is not my thing so I’m never going to do like fancy, fancy,” says Brutel. “I go for taste not design.”

Brutel continues to spread her easy to follow instruction with a growing number of courses and yearns to share some of the her sweet indulgences with her adopted hometown in Colorado.

"We wanted an experience and we love it here,” says Brutel. “We don’t like big cities or small villages so it was the perfect mix. Nature in the city, I haven’t found that elsewhere.” As for the food, “I really want to show that we can make it here like in France.”

The French Kitchen is open Tuesday through Friday, 5:30 a.m. until 5:00 p.m. and on Saturday from 7:00 a.m. until 3:00 p.m. The cafe space is closed to the general public on Sundays and Mondays but available to rent out for private events.